Spain today recorded a fall in the number of new coronavirus cases but an increase in daily deaths, as 3,968 more people were infected and another 430 died.

The fall is notable because Spain typically sees an increase in new cases on Tuesdays when delayed weekend figures are fully accounted for.

This graph shows the daily number of new coronavirus cases in Spain. Today’s figure was 3,968, slightly down from yesterday’s 4,266 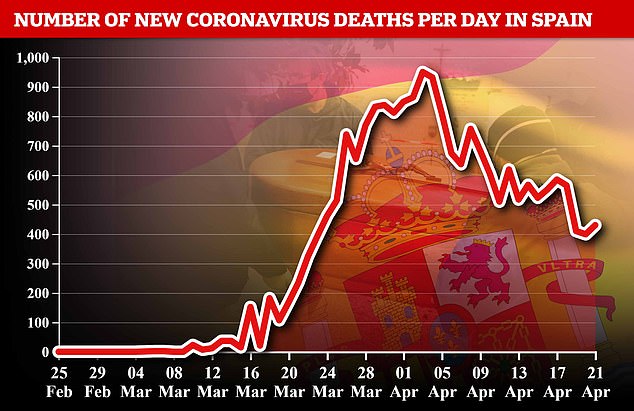 This chart shows the daily number of deaths. Today’s figure of 430 is a slight increase from yesterday’s 399 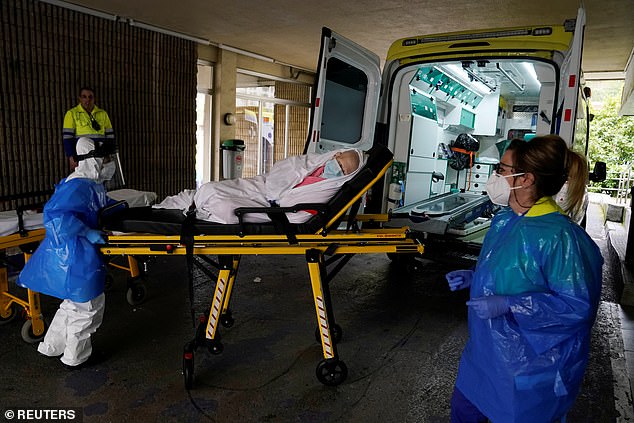 Spain has been in lockdown since March 14, and the measures are expected to be extended with slight relaxations until May 9.

Health emergency chief Fernando Simon says the rate of new infections in Spain is continuing to fall despite an increase in testing.

The regular increase in cases of around 2-3 per cent a day is far lower than the 15-25 per cent which was typical at the height of the crisis in mid-March.

On average, Spain’s new infection count for Tuesday has been higher than on Monday, probably because of delays in reporting weekend figures.

Against that, Spain had said yesterday that its 4,266 new cases included more than 1,000 older ones which had only just been confirmed.

There are fears that the true death toll may be far higher than 21,282, which have been amplified since Catalonia started disclosing thousands more deaths last week after taking a tally from funeral homes.

Those Catalan deaths have not been recorded in Spain’s nationwide figures, despite the region’s calls for the government to do so.

Simon, the emergency response chief, has acknowledged that the ‘real number of deaths is hard to know’.

Even families burying their dead are not always certain what their loved ones died of.

In a nursing home near Barcelona, an 85-year-old woman died on April 8 of ‘possible’ Covid-19, said her daughter Amparo, citing a doctor’s death certificate.

Amparo said her mother was not tested, accusing political leaders of not protecting citizens and dismissing the official tally as useless.

‘Additional people have died because (politicians) have not made sufficient testing possible so that we can know the reality,’ she said. ‘We have left them to die alone.’ 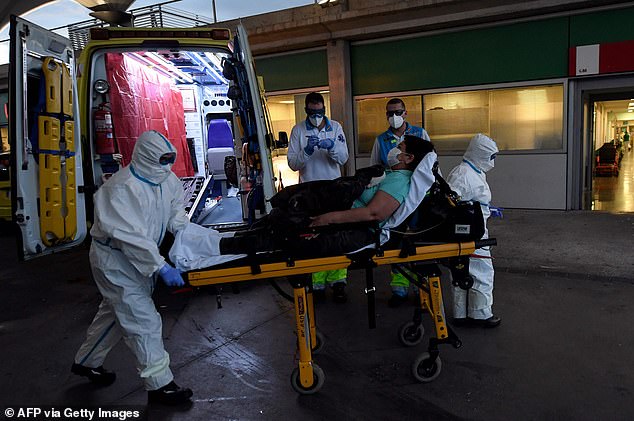 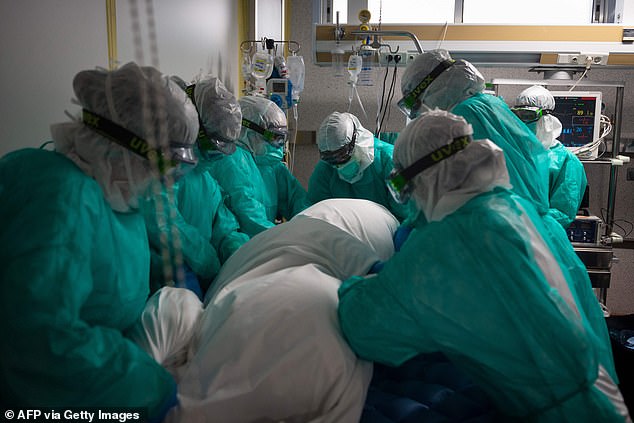 Healthcare workers prepare to move a coronavirus patient at the intensive care unit of the Povisa Hospital in Vigo, Spain

The government has defended its count – which only includes those tested – and said that tracking confirmed deaths allows it to better study the outbreak’s evolution.

Suspected deaths should be analysed at a later stage, the government says.

In other countries, such as Italy and the Netherlands, a large number of coronavirus deaths might not have been reported because of under-testing in nursing homes.

From March 1 to April 10, Spain reported 16,353 coronavirus deaths. But according to the National Epidemiology Centre’s database MoMo, there were 22,487 more deaths than normal for the time of year over the exact same period.

A large part of the 6,134 difference is likely related to COVID-19, said Pedro Gullon, a Spanish Epidemiology Society board member.

But it had to be carefully interpreted because it could also include non-coronavirus deaths of people who did not attend hospitals, he said.

A justice ministry spokesman said it was ‘ridiculous’ to say that the real number of coronavirus deaths could be concealed.

The issue is adding to friction between the government in Madrid and regions with a high degree of autonomy, including Catalonia, whose regional leadership has been waging a long campaign for independence.

The leader of the main opposition People’s Party, Pablo Casado, has demanded that ‘all the truth be told’ about the number of dead.

A lawmaker from the far-right Vox tweeted: ‘No smokescreen will cover the deaths you try to hide’.