A cosmonaut, who is the only Russian to board an American spacecraft amid global tensions over the war in Ukraine, is launching to the International Space Station (ISS) aboard a SpaceX rocket in a mission that is the first to be led by a female commander.

Russia’s Anna Kikina switched places with a NASA astronaut who took her seat aboard a Russian Soyuz flight to the ISS last month under a new ride-sharing deal signed by NASA and Roscosmos in July.

Kikina joins Nicole Aunapu Mann, the first indigenous woman to ever launch into space and the first female to take the commander’s seat of a SpaceX Crew Dragon –  NASA’s Josh Cassada and the Japan Aerospace Exploration Agency’s (JAXA) Koichi Wakata are also part of the historic Crew-5.

The rocket is set to take off at 12pm ET and the crew is set to dock at the ISS about 29 hours later on Thursday evening to begin a 150-day science mission aboard the orbital laboratory some 250 miles above Earth. 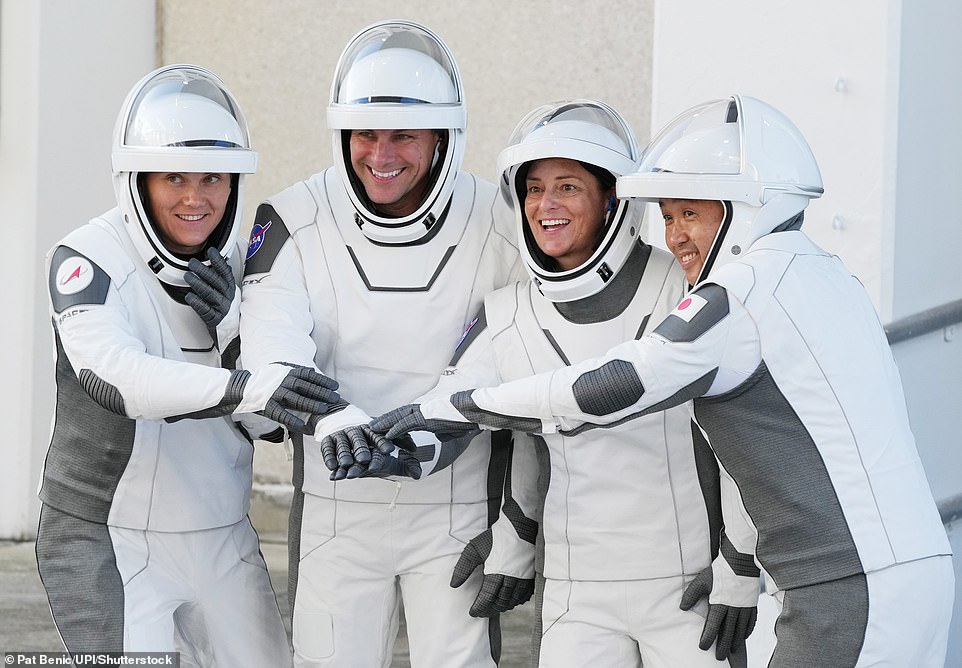 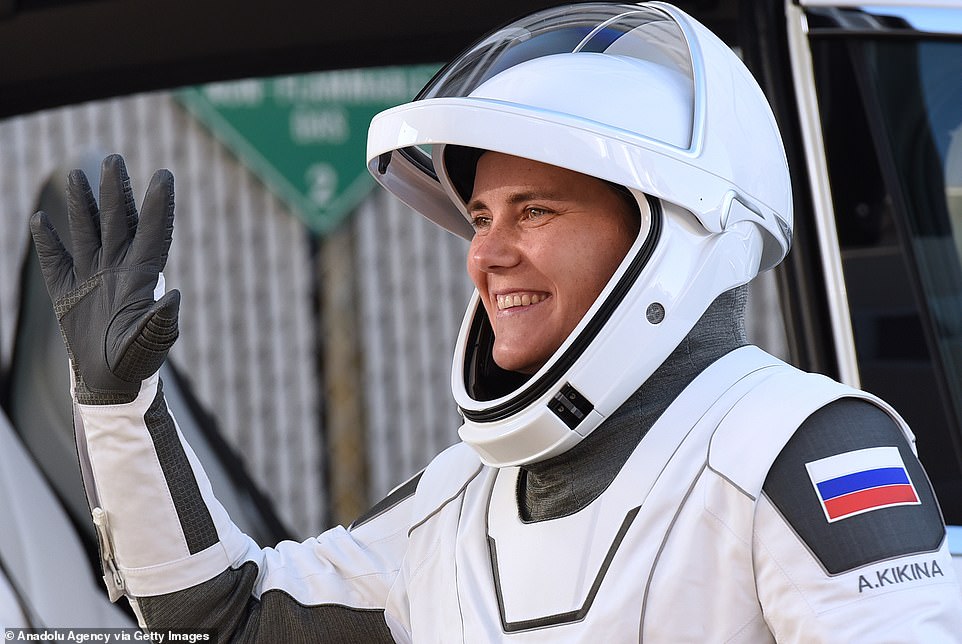 Russia’s Anna Kikina (pictured) switched places with a NASA astronaut who took her seat aboard a Russian Soyuz flight to the ISS last month. She is the first Russian to fly on an American rocket since 2002

The four individuals are patiently waiting inside the Dragon crew capsule, dubbed Endurance, on top of a Falcon 9 rocket at Kennedy Space Center in Cape Canaveral, Florida.

Earlier Wednesday, the crew conducted the pre-flight steps, specifically walking out of the hanger in their sleek, white suits to say goodbye to friends and family.

Then the four space faring heroes were driven to the launch pad inside two white Tesla vehicles.

The mission marks the fifth full-fledged ISS crew NASA has flown aboard a SpaceX vehicle since the private rocket venture founded by Elon Musk began sending US astronauts aloft in May 2020, which was nearly a decade since an American rocket launched from US soil.

Kikina will be only the fifth Russian woman sent to space in a historically male-dominated cosmonaut corps.

‘In general, for me, it doesn’t matter,’ she said in a recent interview, shrugging off the novelty of her Roscosmos stature. 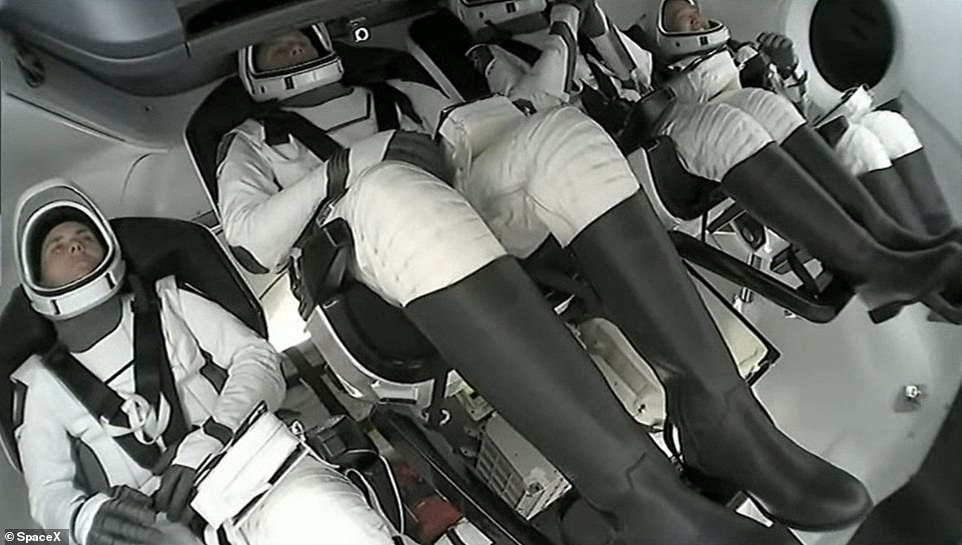 The four individuals are patiently waiting inside the Dragon crew capsule, dubbed Endurance 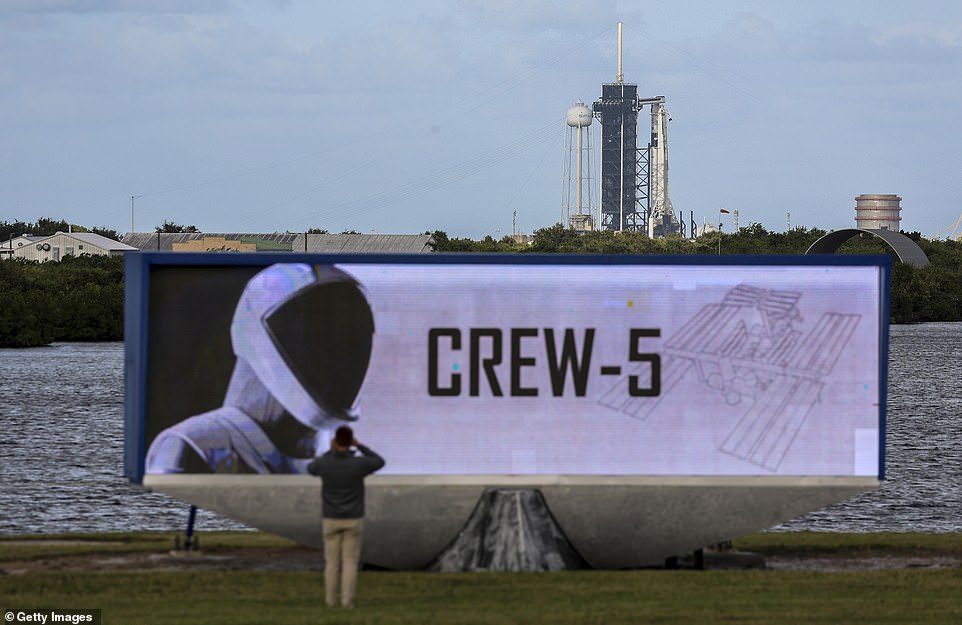 Crew-5 is waiting inside the Dragon capsule, dubbed Endurance. The countdown clock has yet to begin, but is set to start before the 12pm launch time. 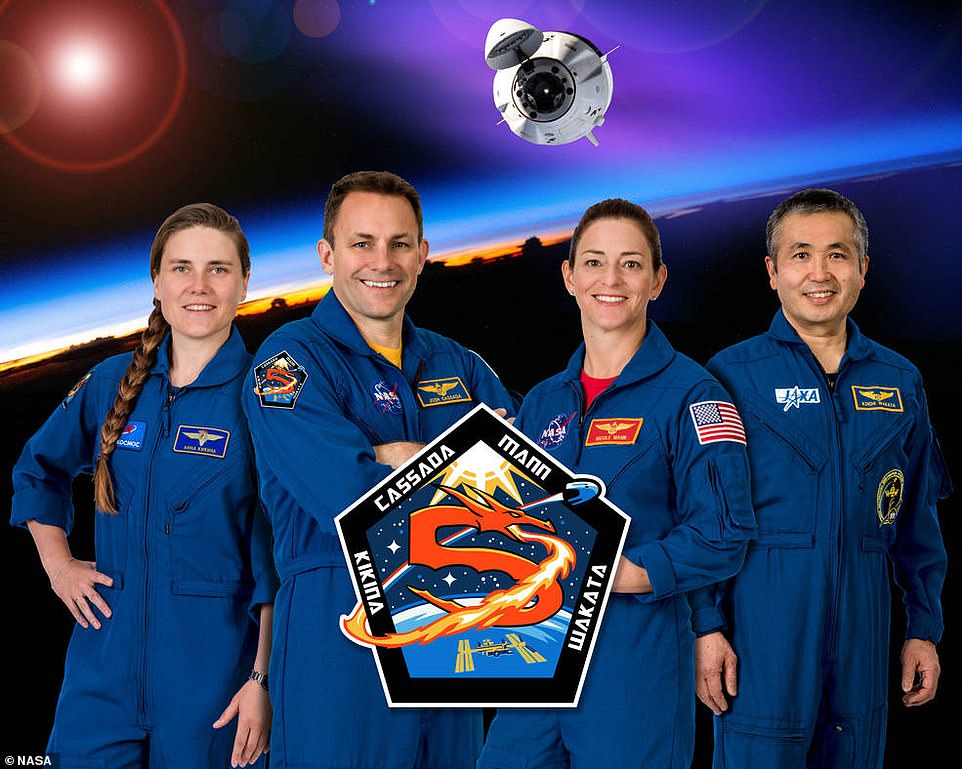 ‘But I realize the responsibility for it because I represent the people of my country.’

As a registered member of the Wailacki of the Round Valley Indian Tribes, Mann will become the first Native American woman to fly to space.

‘I am very proud to represent Native Americans and my heritage,’ Mann said. ‘I think it’s important to celebrate our diversity and also realize how important it is when we collaborate and unite, the incredible accomplishments that we can have.’

The only other indigenous American launched to orbit was John Herrington, who flew on a 2002 shuttle mission.

Spaceflight rookie Cassada, who is a US Navy aviator and test pilot with a doctorate in high-energy particle physics, is the designated pilot for the launch.

Rounding out the crew from JAXA is veteran astronaut Wakata, a robotics expert making his fifth voyage to space.

The Crew-5 team will be welcomed by seven existing ISS occupants – the Crew-4 team consisting of three Americans and an Italian astronaut – as well as two Russians and the NASA astronaut who flew with them to orbit on a Soyuz flight.

The new arrivals are tasked with conducting more than 200 experiments, many of them focused on medical research ranging from 3-D ‘bio-printing’ of human tissue to the study of bacteria cultured in microgravity.

ISS, the length of a football field and largest artificial object in space, has been continuously occupied since November 2000, operated by a U.S.-Russian-led consortium that includes Canada, Japan and 11 European countries.

Russia, however, revealed plans in July to pull out of the ISS by 2024 and use its own space station.

Days later news spread that the nation decided to keep its cosmonauts on the orbiting laboratory until their own orbital outpost is built – but this will not happen before 2028.

There is also tension between the US and Russia amid the war with Ukraine.

The US and allies support Ukraine, calling Russia’s invasion into its  neighboring country ‘premeditated, unprovoked and unjustified’ and has accused Russia of war crimes.

Russian President Vladimir has accused Washington of seeking to prolong the conflict in Ukraine and of fueling conflicts elsewhere in the world,

Regardless, NASA does not want any part in the war or the rift between the nations. 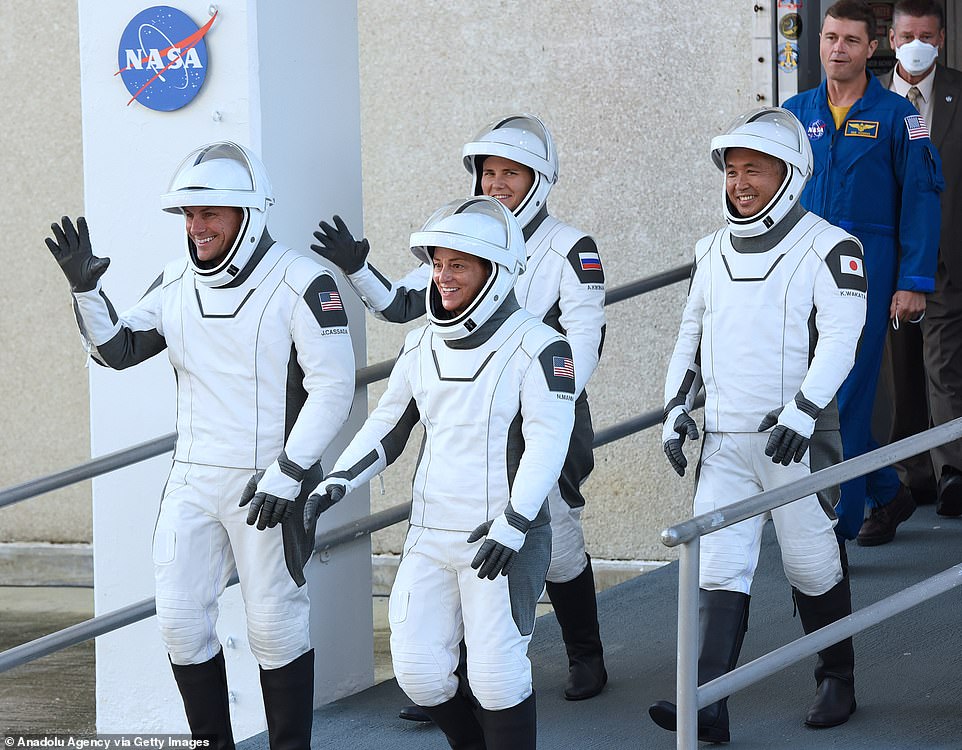 Earlier Wednesday, the conducted the pre-flight steps, specifically walking out of the hanger in their sleek, white suits to say goodbye to friends and family 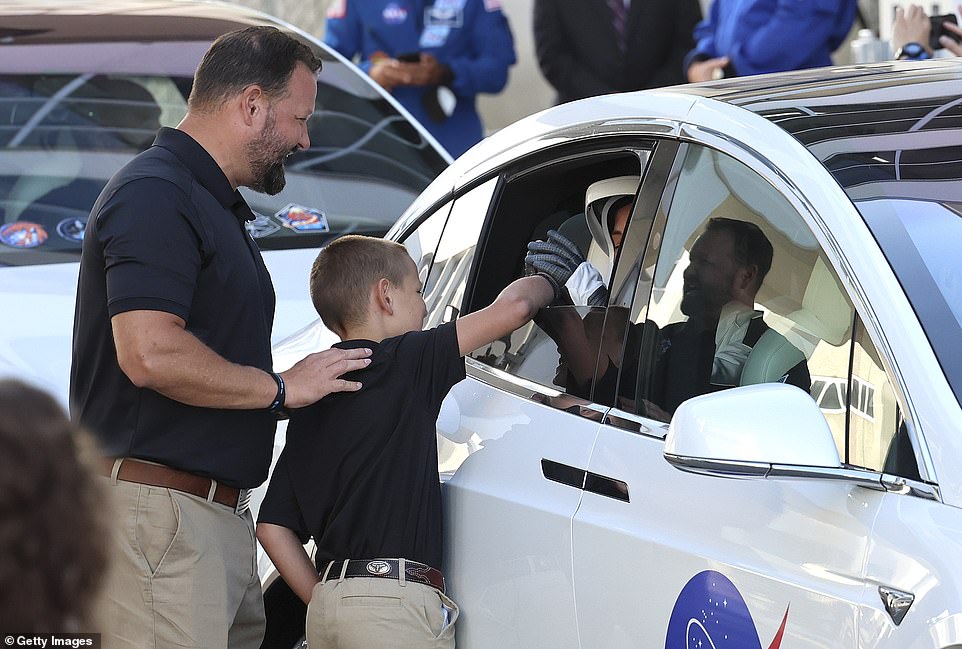 Then the four space faring heroes were driven to the launch pad inside two white Tesla vehicles. Pictured is NASA astronaut Nicole Aunapu Mann talking to her son Jack and husband Charlie as she departs for Launch Complex 39A 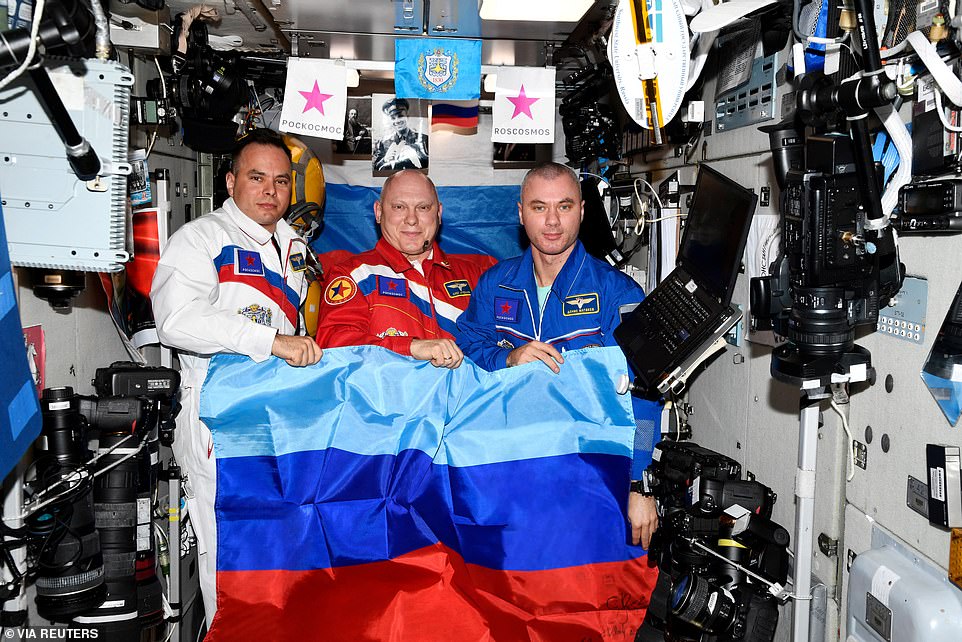 Also in July, the three cosmonauts currently on the ISS, displayed anti-Ukraine propaganda aboard the ship and NASA issued a fierce condemnation of the Russian space agency.

In response to the pictures, posted by Russia’s state space corporation Roscosmos, NASA said it ‘strongly rebukes Russia using the International Space Station for political purposes to support its war against Ukraine.’

NASA may be staying out of the war, but Musk is not keeping his opinions to himself and shared a poll on Twitter suggesting Ukraine should remain neutral and form a peace deal with Russia.

The Kremlin said on Tuesday it was a ‘positive step’ that Musk was outlining a peace deal, just hours after