Elon Musk is a step closer to Mars after his Starship spacecraft designed to go to the Red Planet notched a huge milestone ahead of its maiden launch.

The 395ft-tall rocket and accompanying craft was fuelled up and fully stacked for the first time ever on Monday, as SpaceX completed a ‘wet dress rehearsal’ for the vehicle at its Starbase facility in south Texas.

It is unclear when exactly it will blast off for the first time, but Musk has teased that it will be ‘soon’ and this test is certainly a step in the right direction.

The billionaire is famous for being overly-ambitious when it comes to targets, however, and Starship has faced months of delays readying for its debut lift-off.

Readying for lift-off: Elon Musk is a step closer to Mars after his Starship spacecraft (pictured) designed to go to the Red Planet notched a huge milestone ahead of its maiden launch

What will it be used for? Partly the lander for NASA’s moon missions but also to transport humans to Mars.

Is it reusable? Yes

Engines: Powered by around 32 Raptor engines

Crew module: Starship (ultimately able to carry up to 100 passengers)

Price per launch: Ultimately around $2 million (1.7 million), according to Musk

Where will it launch from? Likely the Starbase facility near Boca Chica, Texas. But possibly Launch Complex 39A at the Kennedy Space Center.

‘Starship completed its first full flight-like wet dress rehearsal at Starbase today. This was the first time an integrated Ship and Booster were fully loaded with more than 10 million pounds of propellant,’ SpaceX tweeted, as it shared footage of the wet dress rehearsal.

‘Today’s test will help verify a full launch countdown sequence, as well as the performance of Starship and the orbital pad for flight-like operations.’

The wet dress rehearsal includes many of the procedures SpaceX engineers will perform on launch day, such as pumping liquid oxygen and liquid methane propellant into the vehicle’s Super Heavy first stage and Starship upper stage.

Its success keeps Starship on track for an orbital test flight within the next few months.

In fact, Musk has said the mission — which will send the craft around Earth once, with a targeted splashdown in the Pacific Ocean near Hawaii — could happen as early as February.

Such a launch will act as an early milestone in his ambition for Starship to carry people and cargo to the moon and Mars.

SpaceX is planning to fly humans to space using a two-stage spacecraft composed of Starship (the passenger-carrying section) and the Super Heavy rocket booster.

Starship is able to generate 16 million pounds (70 Meganewtons) of thrust, making it one of the most powerful rockets in the world.

The firm has been testing prototypes of the $216 million (£189 million) Starship, previously known as ‘BFR’, by launching them into the air and landing them.

These launches have had various degrees of success, with some exploding in a chaotic ball of flames and others returning unscathed.

A full-scale orbital test flight of this current vehicle – which consists of a Super Heavy prototype called Booster 7 and the Ship 24 upper-stage variant – is still yet to take place, despite Musk saying a year ago that it would likely happen in 2022.

Now, the billionaire insists a launch attempt could happen in the next few months, likely in February or March.

On January 8 he posted to Twitter: ‘We have a real shot at late February. March launch attempt appears highly likely.’ 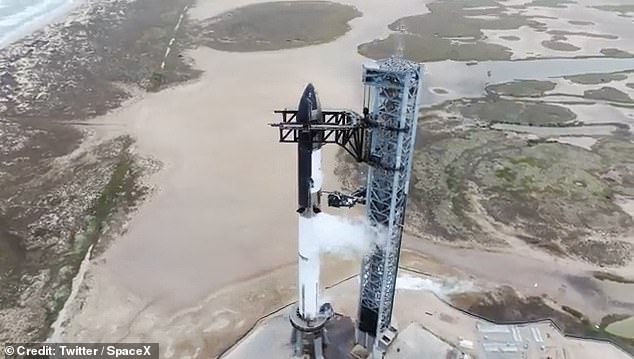 The 395ft-tall rocket and accompanying craft was fuelled up and fully stacked for the first time ever on Monday, as SpaceX completed a ‘wet dress rehearsal’ for the vehicle at its Starbase facility in south Texas 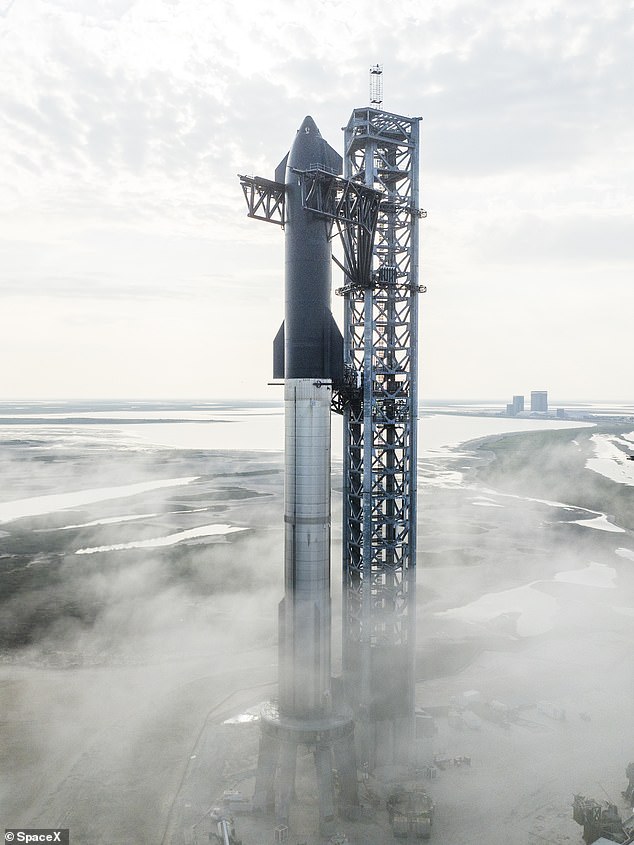 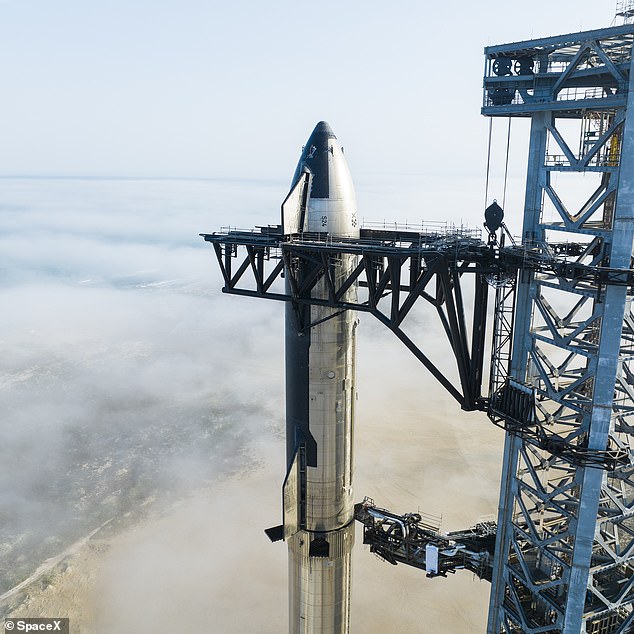 SpaceX still needs to tick off some important boxes to make that happen, however, including de-stacking Starship to test-fire all 33 of Booster 7’s Raptor engines at the same time.

It has so far only done this with 14 of the booster’s Raptors.

The company had originally planned to launch Starship into orbit in January 2022, but was forced to delay the mission following an environmental assessment of the Boca Chica site.

Once a successful orbital flight is in the bag, SpaceX will focus on launching valuable satellites and other payloads to orbit on the rocket.

The firm isn’t just planning on having one Starship — Musk has previously said his firm has built a ‘factory for making a lot of these vehicles’.

Ultimately, he wants to make human life ‘multiplanetary’ – living on several planets – which could require about a thousand Starships.

The billionaire thinks a natural or manmade disaster will eventually bring about the end of civilization, necessitating the relocation to another planet, with Mars ‘being the only realistic option’.

This could be a pandemic worse than Covid, continually decreasing birth rates, nuclear Armageddon or perhaps a direct hit by a killer comet ‘that takes out a continent’. 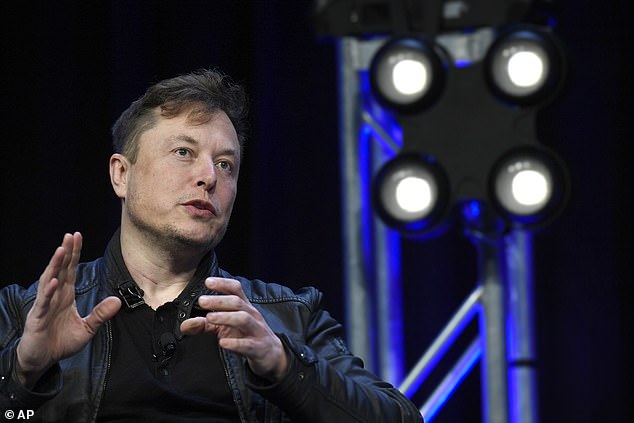 Aim: Musk has said the mission — which will send the craft around Earth once, with a targeted splashdown in the Pacific Ocean near Hawaii — could happen as early as February 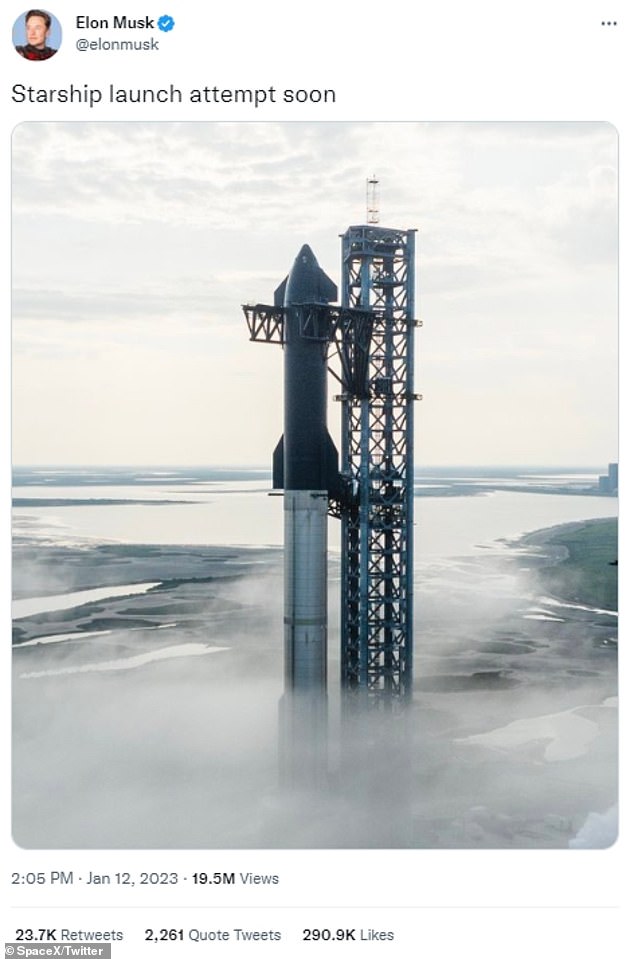 Earlier this month, he posted a photo of Starship on his Twitter account with the caption: ‘Starship launch attempt soon’ 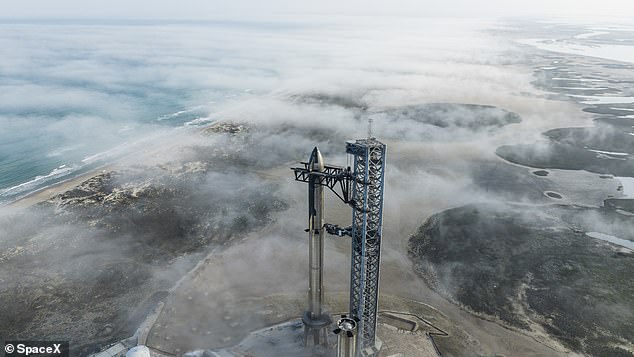 Delayed: A full-scale orbital test flight of the rocket is still yet to take place, despite Musk saying a year ago that it would likely happen in 2022

Japanese billionaire Yusaku Maezawa has also booked a round-the-moon flight on the Starship vehicle for himself and a group of artists and influencers, while NASA is teaming up with SpaceX to go to the moon.

It has contracted the company to use Starship for delivering astronauts to the lunar surface as early as 2025, as part of the Artemis programme (the successor to the Apollo programme in the 1960s and 1970s).

The Artemis missions aim to return humans to the moon ‘no earlier than 2025’.

Artemis I, which sent an unmanned spacecraft around the moon and back to Earth, was successfully carried out at the end of last year.

This will be followed by a human trip around the moon in 2024 as part of Artemis II, before the US space agency aims to land the first woman and first person of colour on the lunar surface on Artemis III in 2025.