The S&P 500 opened lower on Monday as investors paused ahead of crucial economic indicators later this week to take stock of what was set to be the benchmark index’s best November ever.

Wall Street’s main indexes were set to finish the month up more than 10% as investors bet that progress in the development of a COVID-19 vaccine would fuel a swift economic rebound next year.

The Dow is on track for its best month in more than 33 years, The Wall Street Journal reports, after last week topping 30,000 for the first time.

At the same time, oil, industrial commodities and other risk assets have surged, with emerging-market currencies posting their largest gains in almost two years, while safe-havens such as the dollar and gold slipped.

The S&P 500 is heading towards its best November ever; its is seen over the last month 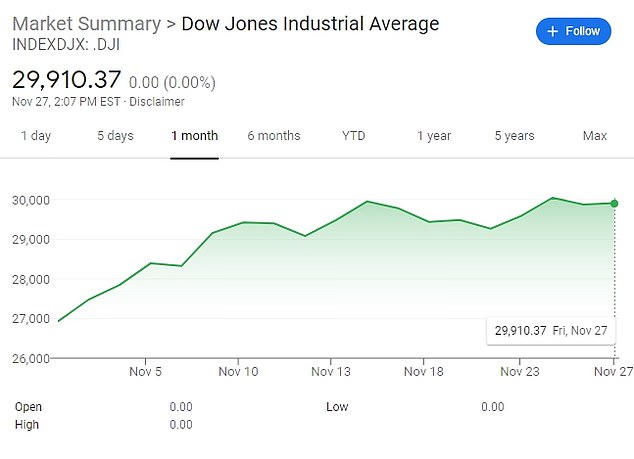 The Dow is on track for its best month in more than 33 years after last week topping 30,000 for the first time; it is seen over the last month 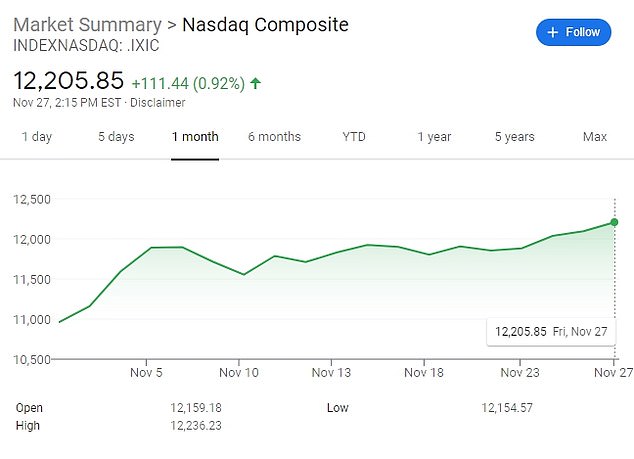 Wall Street’s main indexes were set to finish the month up more than 10% as investors bet that progress in the development of a COVID-19 vaccine would fuel a swift economic rebound next year; the Nasdaq is seen over the last month 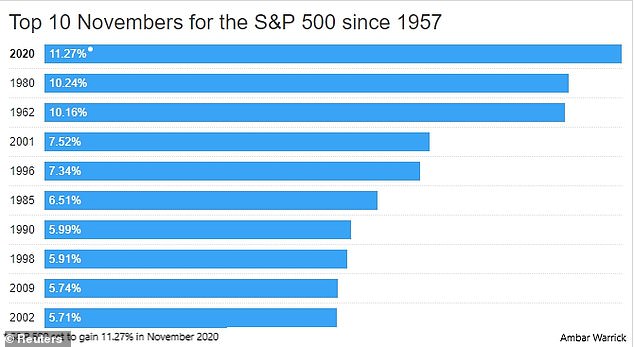 Prospects of a smooth handover of power to President-elect Joe Biden after weeks of legal challenges mounted by incumbent President Donald Trump have also aided the stock-market rally.

Biden and Vice President-elect Kamala Harris were set to receive their first classified presidential daily briefing on Monday, the first step toward the transfer of responsibility for the most sensitive intelligence to a new administration.

‘It has been a very, very strong month for markets, especially on the equity side but also on the fixed income side too,’ said Rabobank’s head of macro strategy, Elwin de Groot.

Ahead of opening bell shares of oil majors including Chevron Corp, Occidental Petroleum and ConocoPhillips were down between 1% and 2.4%, tracking a fall in crude prices on uncertainty about whether OPEC+ would agree to extend large output cuts at talks this week. 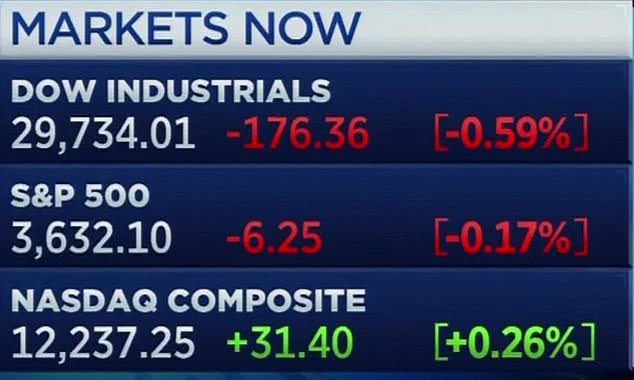 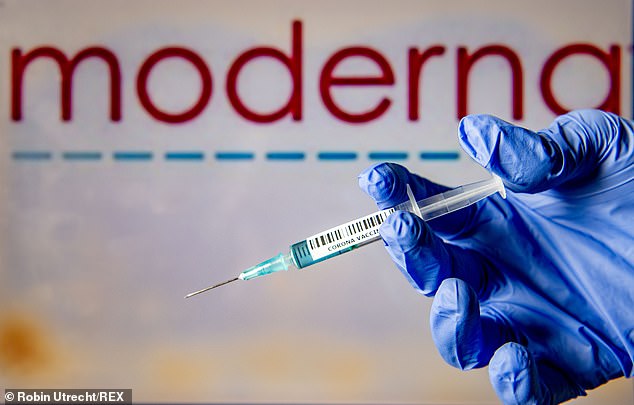 Moderna it will apply for emergency FDA approval of its COVID-19 vaccine on Monday after promising data revealed it is 94.1 percent effective

Drug maker Moderna jumped over 10% ahead of the bell in New York. The company said it will apply for emergency FDA approval of its COVID-19 vaccine on Monday after promising data revealed it is 94.1 percent effective.

Moderna is the second US company to submit for emergency approval; Pfizer submitted last week. Its vaccine is 90 percent effective.

‘A little bit of cautiousness and a little bit of trepidation…. the focus is going to continue to be on vaccine and its distribution, economic news and to see if there is a continuation of interest in early cyclicals,’ said Robert Pavlik, senior portfolio manager at Dakota Wealth in New York.

Macy’s Inc, Walmart Inc and Best Buy Co Inc slipped between 0.2% and 1.9% as masked shoppers turned up in smaller numbers at major U.S. retailers on Black Friday as early online deals and concerns about a spike in COVID-19 cases dulled enthusiasm for trips to the mall.

After an explosion in COVID-19 infections and business restrictions this month that undermined the U.S. labor market recovery, focus will be on the monthly employment report and the Fed’s Beige Book as well as an address by Fed Chair Jerome Powell before the Senate Banking Committee. 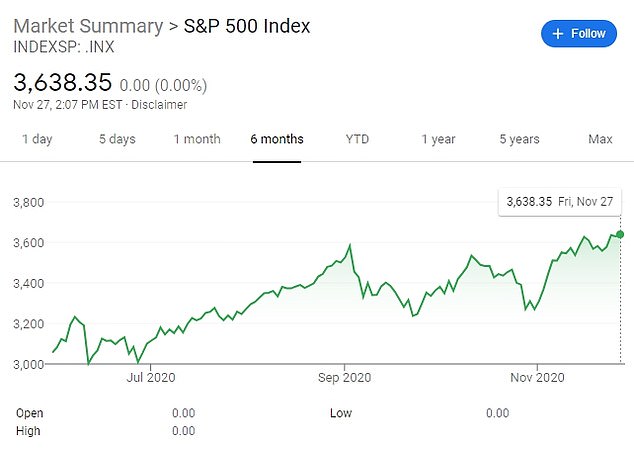 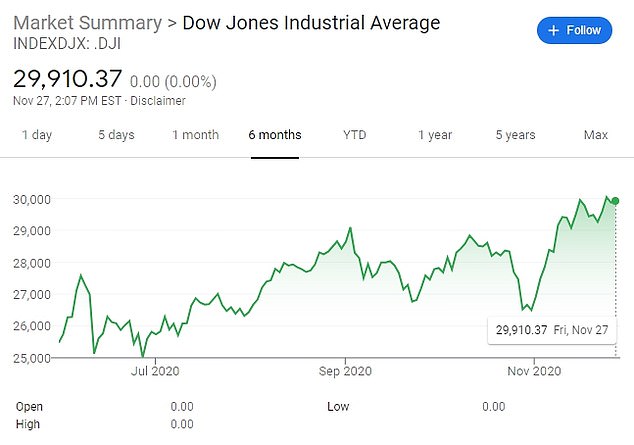 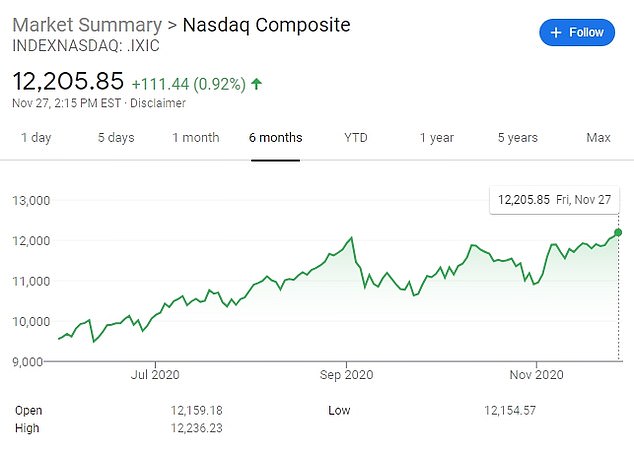 ‘Markets are overbought and at risk of a short-term pause,’ said Shane Oliver, head of investment strategy at AMP Capital.

‘However, we are now in a seasonally strong time of year and investors are yet to fully discount the potential for a very strong recovery next year in growth and profits as stimulus combines with vaccines.’

Helping sentiment further on Monday was a survey showing that factory activity in China beat forecasts in November, and the country’s central bank surprised with an extra helping of cheap loans.

Federal Reserve Chair Jerome Powell testifies to Congress on Tuesday amid speculation of further policy action at its next meeting in mid-December.

Against a basket of currencies, the dollar index was pinned at 91.704 after shedding 2.4% for the month to lows last seen in mid-2018.

One major casualty of the rush to risk has been gold, which was near a five-month trough at $1,769 an ounce, having shed 5.6% in November.

Oil, in contrast, has benefited nearly 30% from the prospect of a revival in demand should vaccines allow travel and transport to resume next year.

Some profit-taking set in early on Monday ahead of an OPEC+ meeting to decide whether the producers’ group will extend large output cuts.