Wild video has emerged of Australian police smashing a car window to arrest a so-called ‘sovereign citizen’ for driving without a licence and refusing to show a real ID after a tense roadside standoff.

The footage, shot from inside the man’s Mitsubishi 4WD, shows officers losing their patience after issuing several requests and warnings, then eventually breaking a rear window and removing the rebellious driver.

The incident occurred on December 11 on Spencer Highway, at Wallaroo north-west of Adelaide and resulted in a 42-year-old man being arrested on several charges.

Despite what appears to be a straightforward example of police dealing with a stubborn refusal to comply, the man has since launched a compensation claim with the SA government on several counts, including ‘armed kidnapping’. 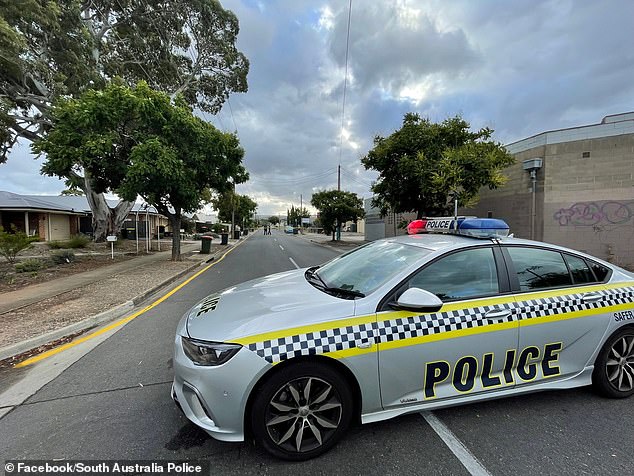 What is a sovereign citizen?

The contemporary sovereign belief system is based on a decades-old conspiracy theory.

Sovereign citizens believe that they – not judges, juries, law enforcement or elected officials – should decide which laws to obey and which to ignore.

Most sovereign citizens also don’t believe they should have to pay taxes.

As part of the strange ideology, Sovereigns believe maritime law should be used govern – even on land.

They also believe capital letters are used on birth certificates to make individuals a corporate entity, not a sovereign person.

The emergence of the video comes just a day after a woman who claimed she is ‘not part of the state’ clashed with a NSW police officer when she was pulled over for not displaying number plates.

In the South Australian video, police try to explain to the driver exactly how he’s broken the law and what he needs to do for at least 10 minutes before realising he won’t budge.

‘Last warning. Show us your real ID or you’re coming with us,’ an officer says through his passenger window after a long stalemate.

‘I don’t have real ID, I showed you the real ID,’ the driver stutters, before an officer forces entry and climbs into his back seat.

‘Now you’re under arrest,’ he is told.

The incident involved three South Australian police officers and the male driver, who speaks with a thick foreign accent.

At the start of the clip the officers state they believe the man is driving an unregistered vehicle on a suspended licence and request he gets out of his vehicle and provide identification.

‘The documentation you provided has a name on it, the name that is linked to that has a suspended driver’s licence,’ an officer explains.

The officers also determined his car is uninsured and request he provide identification and comply with a roadside breath test.

He refuses all requests.

The man is heard arguing throughout that hasn’t done anything wrong and lectures officers that his conspiracy-driven understanding of the law is correct – and that they are wrong.

In all Australian states and territories it is an offence to drive a motor vehicle on a road without a valid licence. You must carry your licence when driving and show it to a police officer when asked. 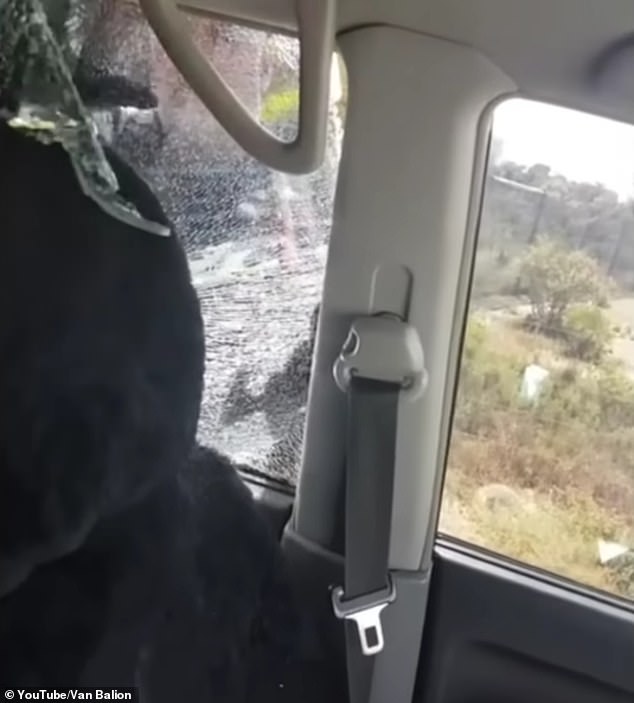 The footage, shot from inside the man’s Mitsubishi 4WD, shows officers losing their patience after issuing several requests and warnings, then eventually breaking a rear window and removing the rebellious driver

All motor vehicles that are driven on Australian roads must be registered. In SA, fines of up to $7500 are payable for driving an unregistered vehicle

Sovereign citizens are a loosely-affiliated but growing movement of people who connected with one another mainly on social media during the pandemic.

They often believe that they – not judges, juries, law enforcement or elected officials – should decide which laws to obey and which to ignore.

When an officer asks if he understands the implications of not complying with their requests, he replies ‘I don’t stand under you, I never will stand under you.’

When officers warn the driver in the latest video ‘you are going to be arrested’, he shoots back ‘what’s the crime [for me] to be arrested?’

‘It’s going to be driving an unregistered vehicle,’ he begins, but is cut off. ‘It’s not a crime. Where’s the victim?’ 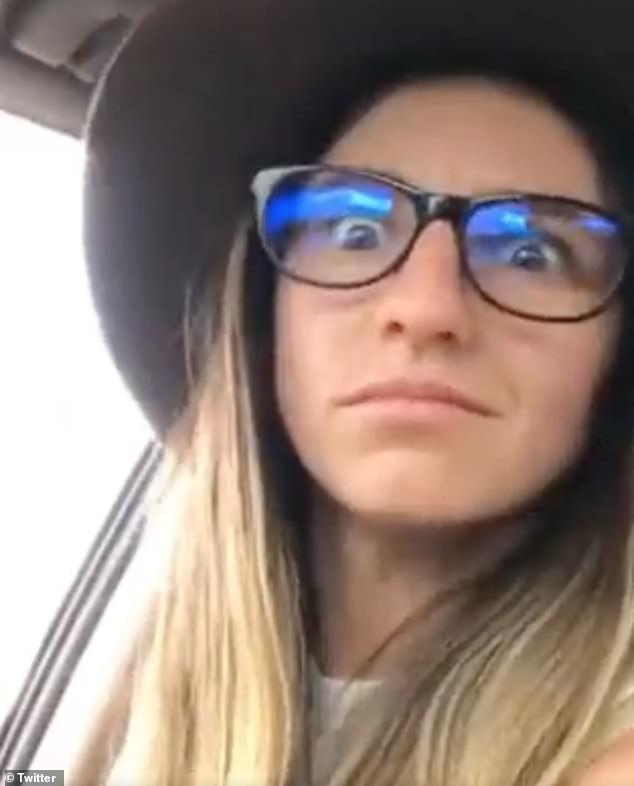 Chloe Fisher, was stopped by police while she was driving along the road at Gundagai, claimeed she was allowed to drive without licence plates because she was ‘going sovereign’

When the reality sinks in that the police are not buying his defence, he asks ‘why don’t you write a fine?’

She refused to accept the validity of an ID card he flashed through the window but refuses to hand over.

At that point the three officers appear to give up trying to negotiate with the uncooperative driver.

In a statement, SA Police told Daily Mail Australia that the man had committed multiple offences and refused all police directions.

‘About 10.40am on Sunday 11 December, police stopped the driver of a Mitsubishi 4WD on the Spencer Highway, Wallaroo after checks revealed the car was unregistered and uninsured,’

‘The driver was directed to submit to a road side breath test however he refused. He also refused to his exit his vehicle after several requests from police.

‘As a result, access was gained to his vehicle and the driver arrested.

‘A 42-year-old man from Wallaroo was charged with driving an unregistered and uninsured vehicle, driving while disqualified and refusing to provide personal particulars.’

The man was released on bail to appear in the Kadina Magistrates Court on 30 January.

A narrated clip of the frustrating incident was posted to a Youtube channel that shows the bizarre antics of ‘sovereign citizens’ from around the world.

The channel claimed that the man in the video believes he has ‘compensation claim’ against SA police for ‘armed assault, trespass on multiple counts, armed kidnapping, destruction of private property and unlawful detainment of liberties’.

In another apparent example of ‘sovereign citizens’ ignoring road rules, Chloe Fisher was stopped by police while she was driving near Gundagai, in rural NSW.

She used her phone to film her conversation with the policewoman who asked her for forms of identification and whether the vehicle was registered.

She stepped out of the car and explained she hadn’t displayed any number plates because she was in the process of ‘going sovereign’.

She handed the officer an ID card that described her status as a ‘sovereign living woman’ with the date of birth category replaced with ‘first breath’.

‘First breath location’ was among the bizarre headings with ‘Earth’ written next to it.

What is Sovereign Citizen Bingo?

The creator of the YouTube channel that posted the South Australian video, Van Balion, produced a cheeky mock ‘sovereign citizen bingo’ card for people to note the familiarity of the arguments used in the clips he posts. 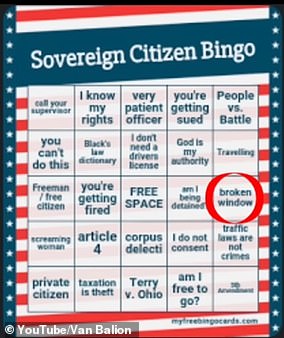 It contained several of the moments from the clip including the man’s excuse he didn’t need a licence because he wasn’t working, that breaking traffic laws is not a crime and the fact his window was broken by cops.

Presumably, like regular bingo, anyone playing Sovereign Citizen Bingo would simply mark off the excuses heard used sovereign citizens in the videos on his channel on their card.

When they mark off five in a row, they get to shout shout out ‘bingo’ and win.