A driver has narrowly escaped death after they nearly collided with three B-double trucks while overtaking another truck.

Dashcam footage of the would-be fatal crash was captured by a truck driver on the Sturt Highway in South Australia earlier this month.

A driver in a blue SUV was attempting to overtake the truck, who captured the dangerous manoeuvre on his dash cam, despite three B-double trucks speeding towards him in the opposite direction.

When would YOU overtake this truck?

However the driver overtaking severely misjudged the situation and found himself in the wrong lane speeding towards three huge trucks – running out of room fast.

Luckily for all five vehicles involved the blue car remerged into its own lane less than a second before the three trucks passed, missing them by metres.

The oncoming trucks were forced to dangerously move partially off the road to allow space for the blue car to pass.

The truck driver with the dashcam could see the incident unfolding as the blue car approaches beside him.

Once the blue car was back in its lane he summed up everyone’s reaction to the situation. 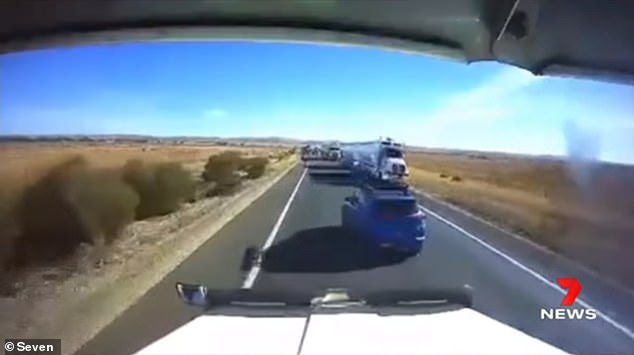 ‘Jesus there’s some f***wits around here isn’t there?’

Steve Shearer, from the Road Transport Association told 7 News that truck drivers are ‘putting their lives at risk’.

‘(They are) having to put their own lives at risk to avoid crashes with selfish pricks who make dangerous overtaking manoeuvres to save a few seconds,’ he said.

Charles Mountain, from the Royal Automobile Association, gave advice about how much space people should allow themselves when overtaking.

‘It takes a good kilometre and more like closer to two kilometres of clear road to safely get past,’ he said.

So far this year the has been 43 fatalities across 41 fatal crashes and 320 serious injuries on roads across South Australia. 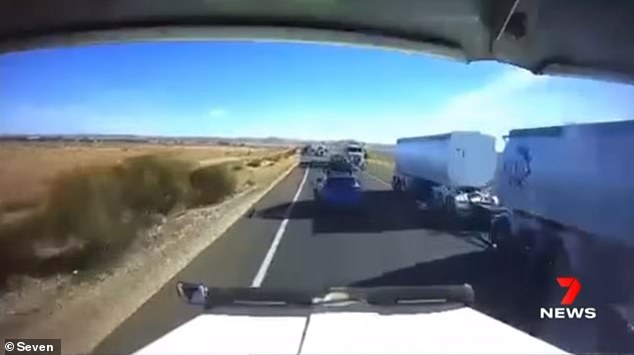