Scientists have analysed the mummified remains of two South American men to determine that they were brutally murdered over 1,000 years ago.

Solving an ancient cold case, they determined one died after being hit over the head and then stabbed, and another from a dislocated spine.

A third female mummy appeared to have died of natural causes, only showing skeletal damage that likely occurred after burial.

Researchers from Munich Clinic Bogenhausen discovered these causes of death after analysing the remains with 3D computed tomography (3D CT).

‘The types of trauma we found would not have been detectable if these human remains had been mere skeletons,’ said corresponding author Dr Andreas G Nerlich.

The study revealed important historic information about how prevalent violence was in prehistoric human societies.

After analysis with 3D-CT, the scientists believe the Marburg mummy (pictured) died after receiving a ‘full force’ strike to the head and then being stabbed in the back while still stood or kneeling. The injuries could have been inflicted by one assailant or an ambush of two between 996 and 1147 CE, according to radiocarbon dating 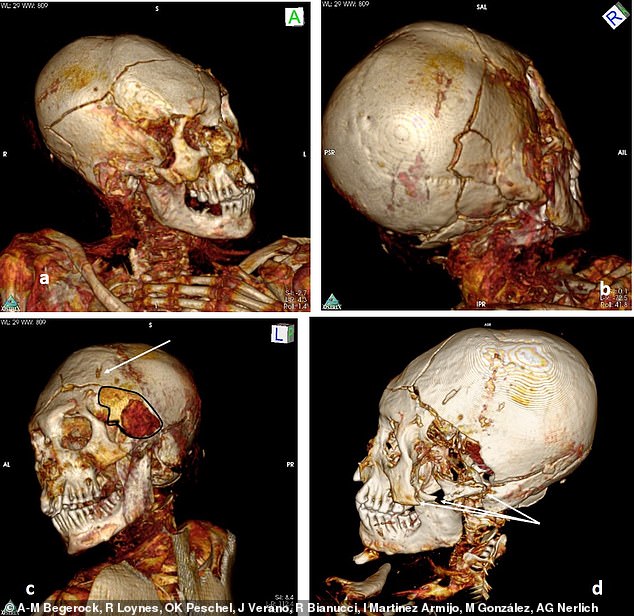 WHAT HAPPENED TO THE THREE MUMMIES?

Most previous studies into evidence of trauma in pre-Columbian remains have focused on skulls and other parts of the skeleton.

However, scientists can gain a lot more information from soft tissue, which is preserved through mummification.

The process is able to occur naturally in dry environments common in the southern zones of South America, as the body’s fluids are soaked up faster than its decay.

The examination of three mummies, from what are now Chile and Peru, using 3D-CT was published today in Frontiers in Medicine.

These were a male mummy at the Museum Anatomicum in Marburg, Germany, and female and male mummies at the Art and History Museum of Delémont, Switzerland.

The Marburg mummy belonged to the Arica culture in today’s northern Chile, and the goods he was buried with suggest he lived in a fishing community.

From the features of his bones, the authors estimated that he was a young man between 20 and 25 years old, approximately 5 foot 7 inches (1.72 meters) tall.

He was buried squatting down, and had some well-preserved teeth that showed some abrasions typical of pre-Columbian people who used maize as a staple food.

While his lungs were scarred from past severe tuberculosis, the scientists believe the death was the result of extreme intentional violence.

After analysis with 3D-CT, they believe the mummy died after receiving a ‘full force’ strike to the head and then being stabbed in the back while still stood or kneeling.

The injuries could have been inflicted by one assailant or an ambush of two between 996 and 1147 CE, according to radiocarbon dating.

The Delémont mummies probably came from the region of Arequipa in today’s southwestern Peru, based on the ceramics among the grave goods.

Both were buried lying face up, which is unusual for mummies from the highlands of South America. 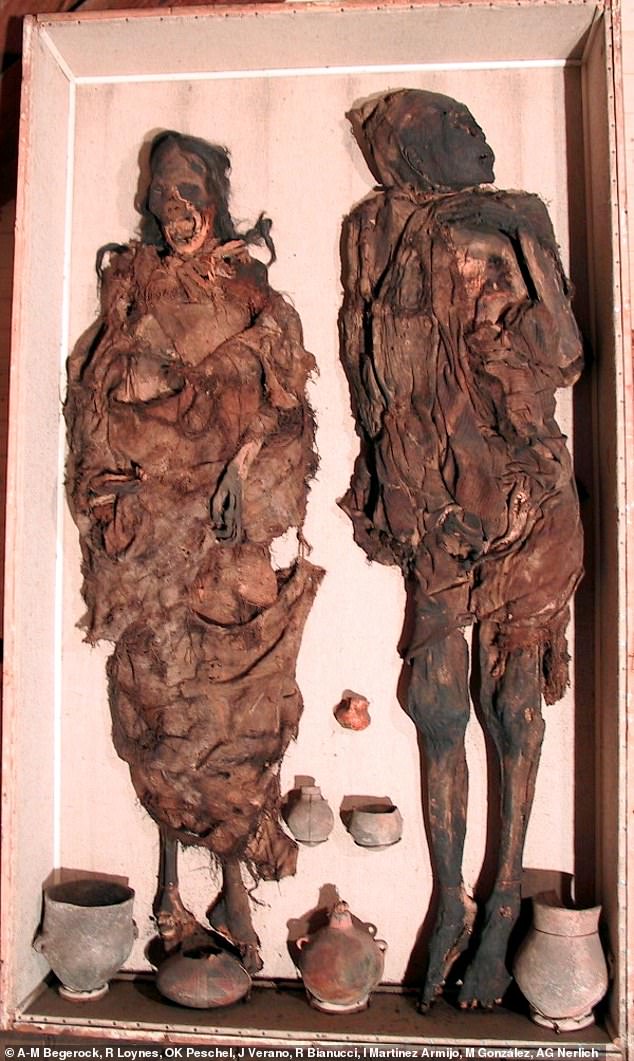 The Delémont male (right) and female (left) mummies probably came from the region of Arequipa in today’s southwestern Peru, based on the ceramics among the grave goods. Both were buried lying face up, which is unusual for mummies from the highlands of South America

They wore textiles woven from cotton and hairs of llamas or alpacas as well as vizcachas, rodents related to chinchillas.

While the state of the aorta and large arteries suggest the man suffered from calcifying arteriosclerosis in life, this was not determined to be his cause of death.

Instead, he showed ‘massive trauma against the cervical spine’, again thought to be the result of intentional violence.

The authors said: ‘The significant dislocation of the two cervical vertebral bodies itself is lethal and may have led to immediate death.’

The female, however, is thought to have died from natural causes, only showing damage to the skeleton likely sustained after her death.

Dr Nerlich said: ‘The availability of modern CT-scans with the opportunity for 3D reconstructions offers unique insight into bodies that would otherwise not have been detected.

‘Previous studies would have either destroyed the mummy, while X-rays or older CT-scans without three-dimensional reconstruction functions could not have detected the diagnostic key features we found here.

‘Importantly, the study of human mummified material can reveal a much higher rate of trauma, especially intentional trauma, than the study of skeletons.

‘There are dozens of South American mummies which might profit from a similar investigation as done here we did here.’

Mummies uncovered in Portugal date back 8,000 years and could be oldest in the world

Human remains uncovered in Portugal date back 8,000 years, and could provide the earliest evidence of mummification, a new study says.

Researchers have studied photographs of skeletal remains of 13 human individuals excavated in the early 1960s in the Sado Valley.

They were able to reconstruct the positions in which the bodies were buried, providing ‘a unique opportunity’ to learn more about 8,000-year-old mortuary rituals.

Until now, the Chinchorro mummies of northern Chile, dating back 7,000 years, are the oldest in the world to have been purposefully preserved by humans.

Meanwhile, the ancient Egyptians were embalming mummies up to 5,700 years ago, according to a previous study.

The research suggests that Sado Valley bodies are the first known human bodies to have been mummified.