EXPRESS INFORMER > News & Politics > Some wild creatures were too tasty to survive, but the result is a real feast

This is one of the saddest books you will ever read and also, perversely, one of the most entertaining.

Michael Blencowe writes about wildlife, works for wildlife conservation charities and is an all-round wildlife nut.

But since childhood he has also been obsessed with the wildlife that has gone, the species that were killed off so long ago that all we have left are a few museum exhibits and folk tales passed down the generations.

In this book he tracks down 11 of these species and writes about their lives and their deaths, the latter almost always being caused by the most fearsome predator on the face of the earth, the human race.

‘The dodo is one of the most recognisable species that has ever lived. It has achieved a dubious immortality: the smiling face of extinction.’

But there are other, less familiar creatures here, and all of them once prospered in their natural habitats.

Then humans turned up, killed them for food or fun, or because they wished to wear their natty feathers in their hats, and before long there were none left.

The terrible thing is, it keeps happening. As a wise man once said, those who cannot learn from history are doomed to repeat it.

The great auk was a huge bird similar in appearance to a penguin that once lived on and around the island of Lundy in the Bristol Channel, but flourished particularly off the coast of Newfoundland in Canada, where there were 100,000 of them.

It ate fish and only fish and its tiny wings meant it could not fly, but it became a master of the waters, its bulky body enabling it to dive deeper and fish for longer.

There was only one problem: it had to lay an egg, and you can’t lay an egg in water. For two months each summer the bird had to venture somewhere far more perilous: the land.

Blencowe writes: ‘Once ashore, the adaptations which had made the great auk the perfect underwater hunter left it totally vulnerable when it came face to face with the most vicious killer of all.’ 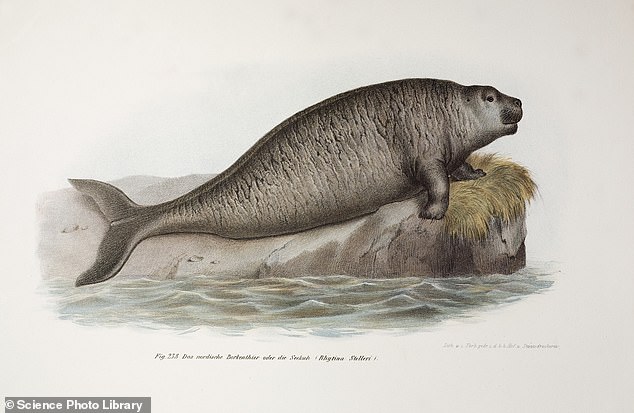 Steller’s sea cow (pictured), which was said to taste like ‘fine beef’, took just three decades to be eaten and were extinct by the 1770s

Humans 1, great auk 0. The last one in North America was eaten by sailors before 1800. A pair of auks on the Orkney Islands were stoned and shot in 1812. A lone great auk was captured on St Kilda in 1821, declared to be a witch and beaten to death, reveals Blencowe.

The last substantial colony of the birds holed up on a remote island off the coast of southern Iceland, defended by ‘deadly currents and ominous superstitions’.

But unknown to the birds, they were on a volcanic island. In 1830, there was an eruption and it sank. What finally did for the great auk, though, was the realisation that there were so few of them left. Museums across the world scrambled to secure specimens. They offered high prices to anyone who could shoot the birds and help them add to their collections. The irony is almost overwhelming.

Or take Steller’s sea cow, a marine mammal ‘longer than a killer whale, heavier than an elephant’, once found around Bering Island, near the Kamchatka Peninsula. Its intestinal tract was nearly 500 ft long — about a tenth of a mile — its stomach was so huge that four men together could barely lift it and its meat tasted like ‘fine beef’. The sea cows took just three decades to be eaten and were extinct by the 1770s.

Several chapters are set in New Zealand where, I didn’t realise until now, there were no mammals at all, other than a few bats and seals, until about 1300. Then the Maori sailed in from nearby Polynesia and changed everything.

Before the mammals, a number of bird species had developed that lived very happily and safely in the ancient woodlands, noshing on plants without any fear of being eaten by something bigger and nastier. There were nine species of moa, ranging from the turkey-sized little bush moa, to the giant moa, which stood 7 ft tall, or some 12ft with their necks stretched out, making them the tallest birds ever known.

They ruled for centuries, but their wings got smaller as their bodies got bigger, and they also had the misfortune to taste delicious. They were gone by 1445.

Massacre follows massacre in Blencowe’s book. Reading it, you begin to marvel that there are any wild animals left at all.

But he writes with such bubbling enthusiasm and a winning lightness of touch that his book never becomes depressing.

As you may have gathered, he is a practised truffler of extraordinary facts, and his travels to far-flung places to commune with fellow wildlife loons are never less than good fun.

The message is a bleak one, but the book is a hoot. A spoonful of sugar makes the medicine go down, as a wise woman once said.