With air travel in chaos, families are looking at alternative options for holidays closer to home.

But with demand and prices for hotels in the UK also rocketing, many people are seeking greater independence — including buying a touring caravan. About 555,000 UK households already have one, and the two main caravan clubs have seen memberships rise rapidly.

The caravan is only half the story, though. It’s one thing to have your own mobile home on wheels. But have you got a suitable vehicle to tow it — whether a big 4×4 like a Land Rover Discovery or Defender or rough-riding Jeep, or a more modestly sized SUV or estate car, petrol, diesel, hybrid or fully electric version?

A bit of oomph: The Tow Car Awards 2022 – have you got a suitable vehicle to tow your caravan?

Remember, it’s not just pulling power and stability that are key factors, but also range and fuel costs. Adding a wheeled home to your vehicle will more than halve your fuel economy. And there are particular challenges if your vehicle is electric, as ministers have decreed all new cars must soon be.

Both are well represented at the Motorhome & Caravan Show (mcshow.co.uk), taking place at Birmingham’s NEC from October 18 to 23 — with more than 1,000 leisure vehicles on display, plus towing sessions and test drives — for which tickets have just gone on sale.

PICK OF THE BUNCH

Cars can tow vehicles only to a set percentage of the vehicle’s own weight. Most were tested to 85 per cent, but some were at a lower limit if it was specified.

Tests on the track included driving at 60mph (the legal limit for towing on a motorway), 30mph to 60mph acceleration time and stopping distance from 30mph to stationary. Practicality and boot space were checked to see if it could accommodate ‘a typical caravanning load of luggage’, as were puncture repair kits and whether a trailer stability system is fitted.

Value for money, safety and running costs were also considered, as was how good the car was to drive without a caravan. Judges said of the winning Audi Q5 that it was ‘exceptionally stable’ and towed ‘serenely’ at all speeds, with a ‘near ideal blend of performance, stability and practicality’. Costing £46,650, it’s not cheap, but residual prices are strong for resale. 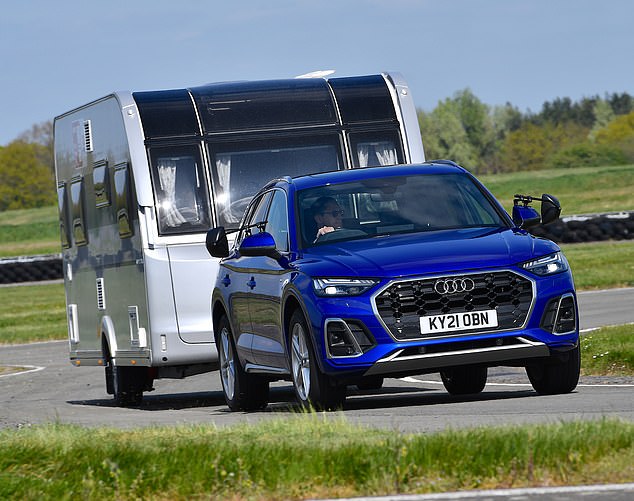 Judges praised the diesel engine’s strong pulling power which takes the caravan ensemble from 30mph to 60mph in 10.6 seconds.

The average fuel economy drop for an electric car towing a caravan is more than half (54.6 per cent) compared with a third in a petrol or diesel.

WhatCar? noted: ‘So it will be necessary to stop more often with an electric car. Plus, topping up is likely to be much more complicated.’

‘However, none of the motorway services run by the three main operators in the UK currently allows caravanners to charge without first unhitching. And due to one-way systems, some make it impossible to get back from the chargers to the towing parking area.’

Meanwhile, the rival Caravan and Motorhome Club Tow Car of the Year Awards 2022 named the SEAT Leon Estate as its overall winner, as well as in the 1,100-1,200kg weight category. It was praised for its ‘powerful petrol engine, composed handling, comfort and practicality’.

Priced from a more affordable £29,005 OTR, the SEAT Leon Estate FR 1.5 TSI 150PS DSG-auto can tow up to 1,700kg (max braked trailer weight) and can be fitted with a retractable towing hook for an additional £710. The Caravan and Motorhome Club tow car jury said: ‘The Seat Leon is a great all-round family estate. Judges loved the spritely, 1.5- litre TSI ­petrol engine, which worked well with the 7-speed DSG-auto gearbox.

Of tests carried out at the Millbrook proving ground in Bedfordshire, they said of the SEAT: ‘On the faster sections of the route, it remained calm and composed, while on hilly, twistier roads it felt agile, the engine coping really well with the inclines.’ It proved comfortable, roomy and with a decent-sized boot.

Nick Lomas, director general of The Caravan and Motorhome Club, said: ‘With the rise in popularity of the staycation, it’s more important than ever that the club continues to provide qualified and unbiased information to help members find the right tow car for their needs.

‘We’ve also been receiving an increasing number of inquiries about the technicalities and practicalities of towing with hybrid and electric vehicles.’

You don’t need a special driving licence to tow a caravan, but there are rules about the load that you can tow, depending on when you passed your driving test and your car’s suitability for towing.

Experts at car finance firm moneybarn.com said motorists should follow manufacturers’ instructions when coupling the trailer to the towball, check tyre tread, and ensure insurance covers you for towing.

Exercise caution while towing, especially when slowing down, stopping and at bends: ‘­Trailers tend to cut corners when turning, so it is important to allow extra room.’

Extra vigilance is needed with parking and road positioning, particularly when pulling over alongside kerbs, entering toll booths or stopping at petrol stations.’

If storing your caravan at home, on your driveway, or on private land. check the rules on planning permission — and especially whether there’s a ‘restrictive covenant’ on the lease of your property.

Are you braced for frantic Friday?

As the summer holiday getaway begins in earnest today with ‘Frantic Friday’, are you geared up to navigate your way through it.

You need to be, as UK families take more UK ‘staycations’ and even single ‘daycations’ to avoid foreign flight travel chaos and cancellations.

The RAC is predicting there will be 4.29million leisure drivers on roads across England and Wales today with nearly 19million cars on the road over the weekend. 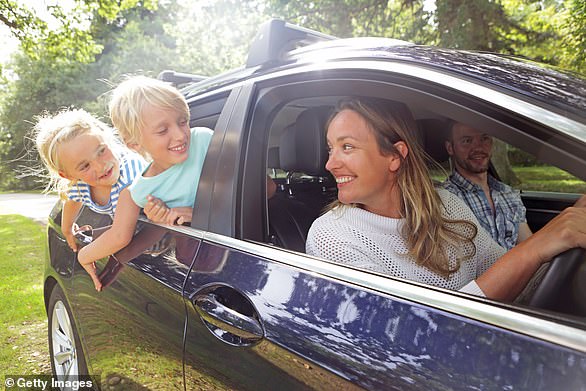 Beat the jams: As the summer holiday getaway begins in earnest, plan your trip ahead

INRIX, the transport analytics specialist, is recommending drivers plan well ahead and start their journeys either early in the morning or later in the evening.

The worst jams are expected on the M25 — especially near the Dartford Crossing, the M3, and the Surrey section between the M23 and M40. The A303 near Stonehenge, M4 between Cardiff and Newport and M5 south of Bristol are also likely to see big queues over the weekend, with vehicle breakdowns adding to problems.

Sat nav app specialists Waze says only a third (32 per cent) of UK motorists plan to spend their holidays abroad this summer, while 59 per cent expect to take day-trip ‘daycations’ — defined as a trip over ten miles from home with no overnight stay. Waze predicts that domestic travel will surge as drivers prepare to leave earlier and spend up to 12 hours on the roads.

Coastal roads, national heritage sites and hiking spots face the biggest increases in traffic with the Lake District (23 per cent), Cornwall (20 per cent), and Yorkshire (18 per cent) topping the list of destinations.