EXPRESS INFORMER > News & Politics > Soldier’s bedroom has not been touched since he died… in WORLD WAR I:

A First World War soldier’s bedroom has lain completely untouched in his former home since he died from injuries 102 years ago.

Dragoons’ Second Lieutenant Hubert Rochereau died aged 21 in an English field ambulance after fighting in the village of Loker, Flanders, on 26 April 1918.

His heartbroken parents, initially unable to locate their son’s body, said they would turn his bedroom into a permanent shrine to his memory.

Mr Rochereau was buried in a British cemetery and lay undiscovered by his family until four years after the war ended, in 1922. He was repatriated to a graveyard at his home village of Bélâbre, 44 miles from Poitiers, south-western France. His bedroom, where he was also born, remains untouched to this day as a permanent memorial.

Dragoons’ Second Lieutenant Hubert Rochereau died aged 21 in an English field ambulance after fighting in the village of Loker, Flanders, in 1918. His bedroom at home in Belabre, 44 miles from Poitiers in south-west France, was left untouched 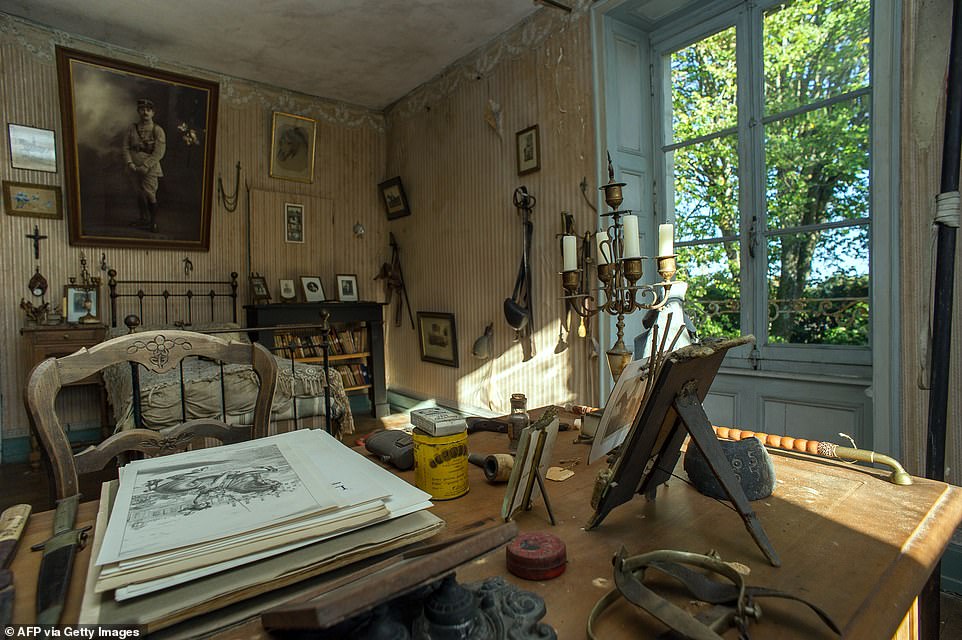 When his heartbroken parents bequeathed the house in 1935 they bricked up the entrance to the room and stipulated to the new owner, French General Eugene Bridoux, that no item was to be moved from the room for 500 years 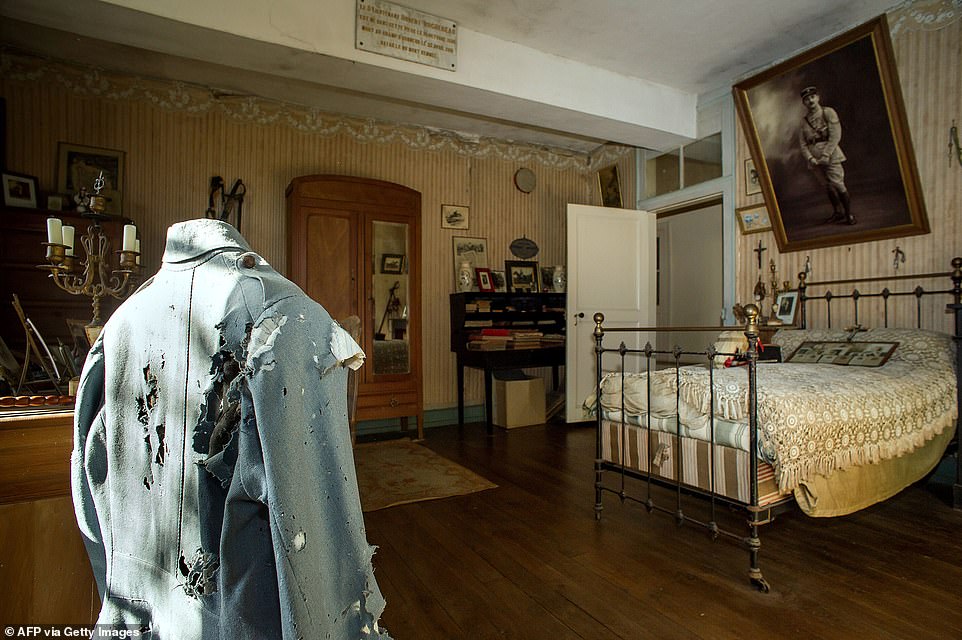 Today the dust-covered bed, military jacket and items of furniture are still lying where he left them 102 years ago

Stunning photos show the soldier’s dust-covered military hat still lying on his bedsheets, more than a hundred years after he last set foot in the room, while a military jacket still hangs in a corner.

A pistol, pipe and stirrup for horse riding remain on his desk positioned facing the window, which still has a chair tucked underneath ready for his return.

Discoloured books, a candle and a vase of brown withered flowers remain on his bedside table, in front of a picture of a soldier in uniform, and French flags still hang from poles propped against the wall.

His parents kept the room exactly as he left it and, when they bequeathed the large family home to French General Eugene Bridoux in 1935, stipulated no item should be moved inside it for at least 500 years.

The Second World War broke out three years later and, after France’s defeat in 1940, General Bridoux became Secretary of State for the Vichy Regime, which maintained compliance with the occupiers and oversaw the transfer of thousands of French Jews to Nazi concentration camps.

General Bridoux fled to Franco’s Spain at the end of the war, and remained there until his death in 1955. He was sentenced to death by French authorities in his absence and his property was confiscated. 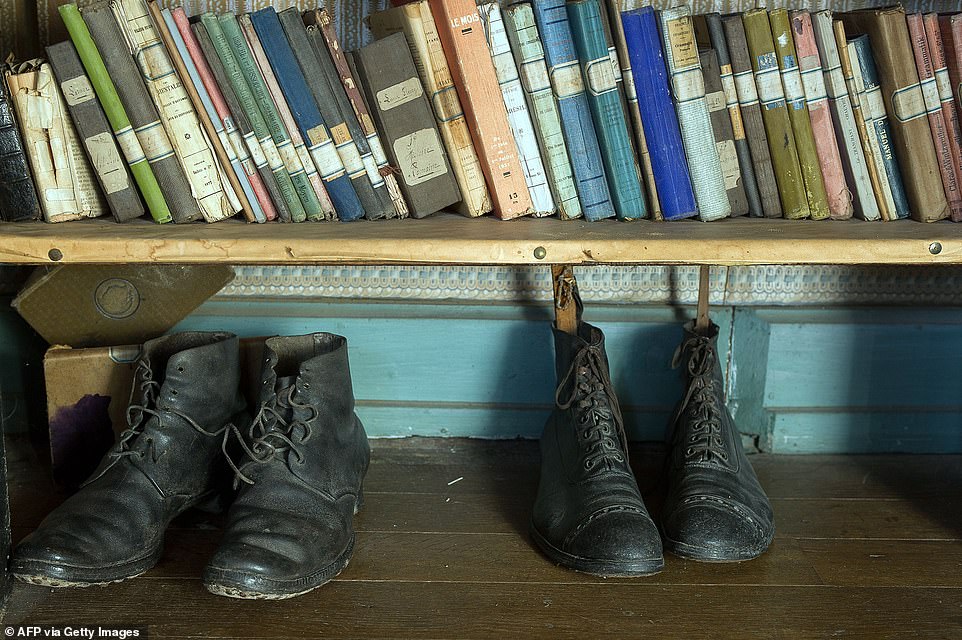 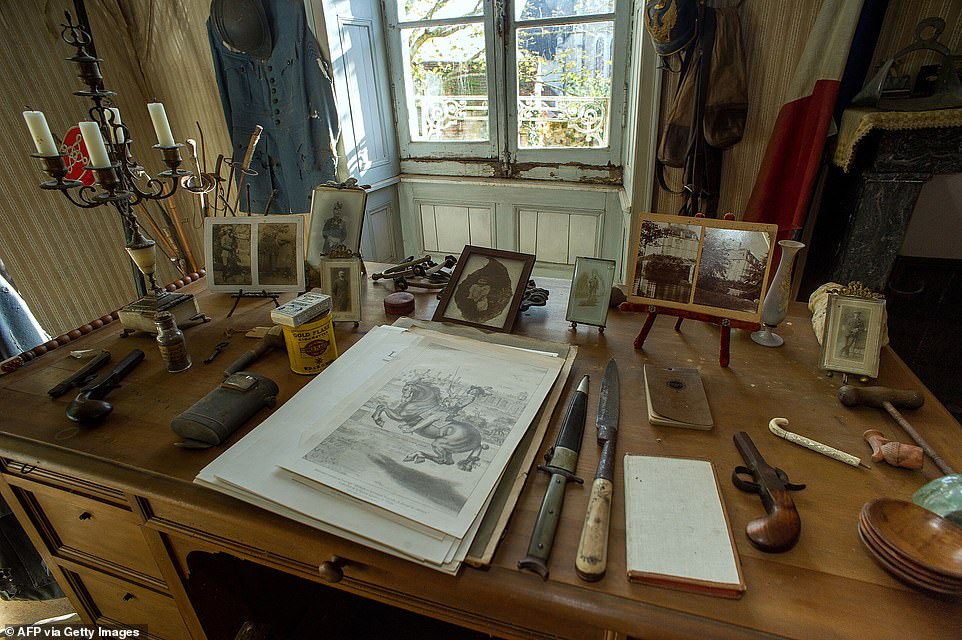 A pistol, knives and drawing remain on his desk. The house’s owners have said they will not move any items from the room 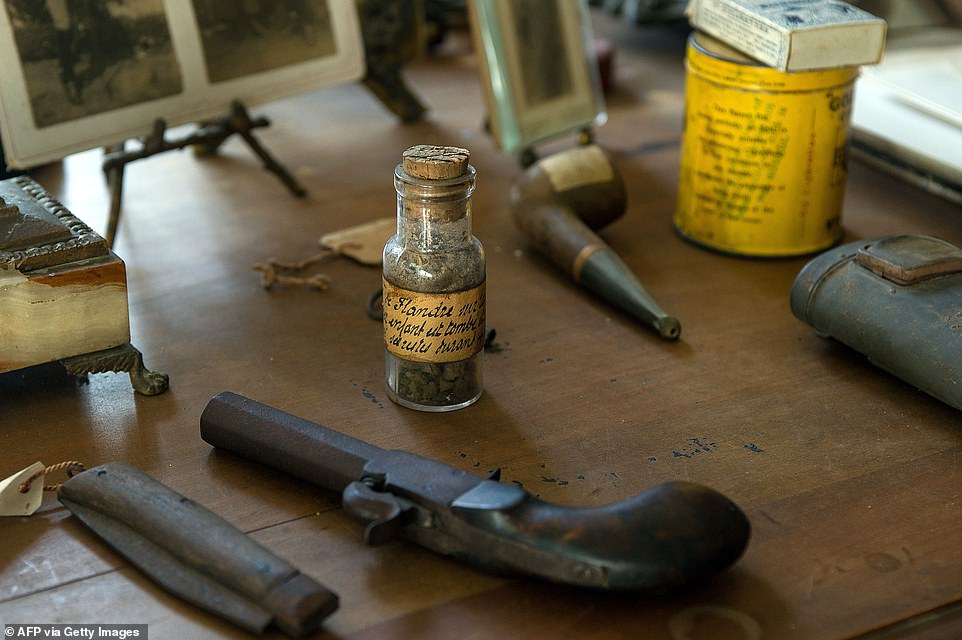 The pistol and pipe lying on the desk are pictured above. After receiving the house General Bridoux led the French Vichy regime which oversaw compliance with the Nazi occupiers and the transfer of French Jews to concentration camps 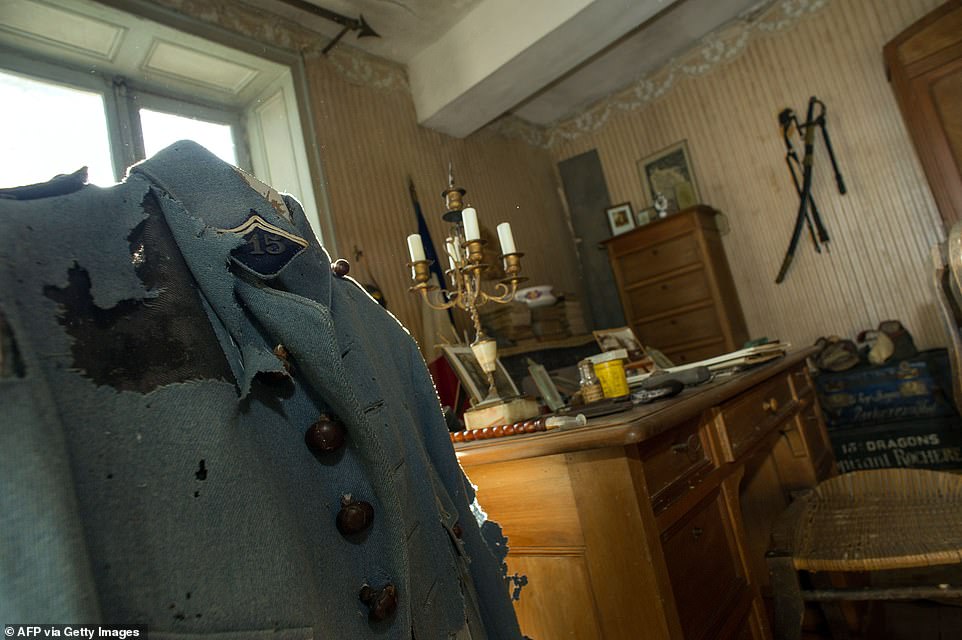 The solider’s moth-eaten military jacket hanging next to his desk is pictured above. A sword remains on the wall

The house was rented by a family of solicitors initially until it was purchased by General Bridoux’s granddaughter and her husband Daniel Fabre in the 1950s. Mr Fabre was still living at the property in 2014.

Aware of the hidden shrine in the house, they eventually decided to take down the brick wall concealing it.

Bélâbre’s mayor, Laurent Laroche, told The Guardian in 2014 the family invited local officials to see it in the 1980s and ‘said they intended to keep the promise made to keep the room untouched’.

‘We cannot forget that it is a private property,’ he added. ‘Mr Fabre has two daughters and we don’t know what they will do with it one day. Indeed, they are perfectly free to do whatever they want.’

The mayor has previously appealed for benefactors to help preserve the room and transform it into a museum. 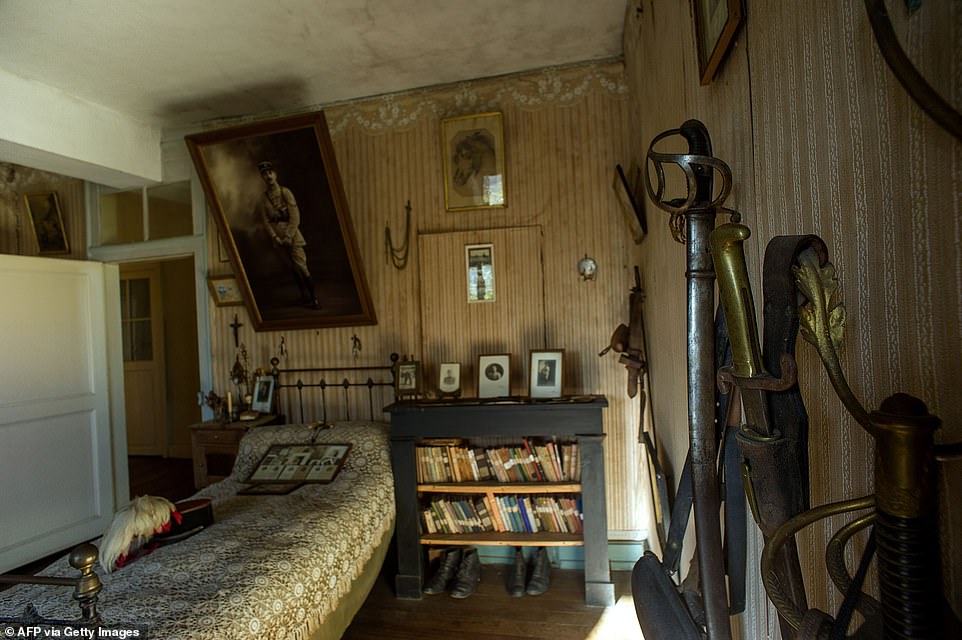 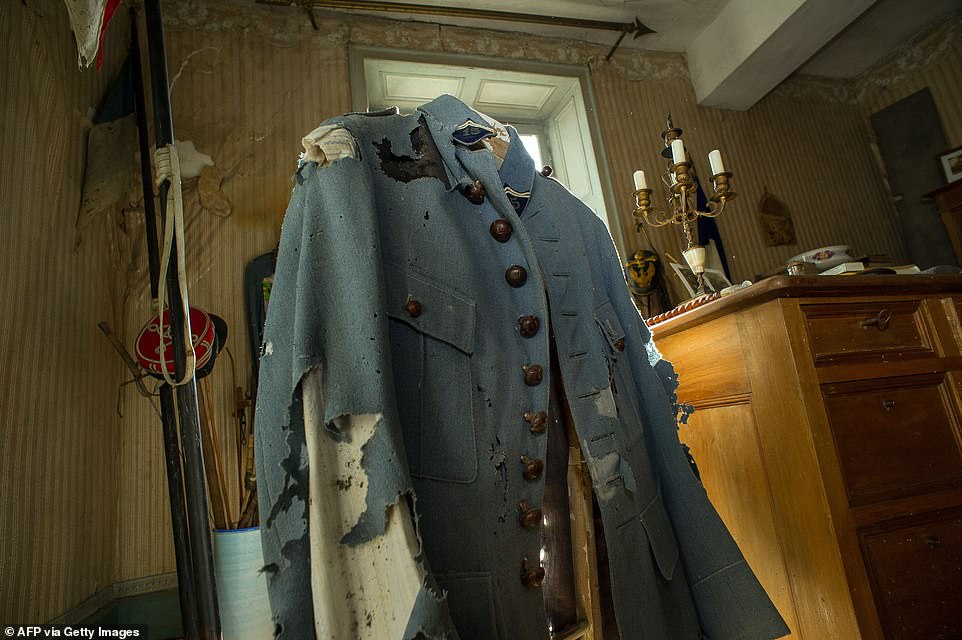 It is unclear whether, if the house is sold again, the items still in the room will be moved from their positions 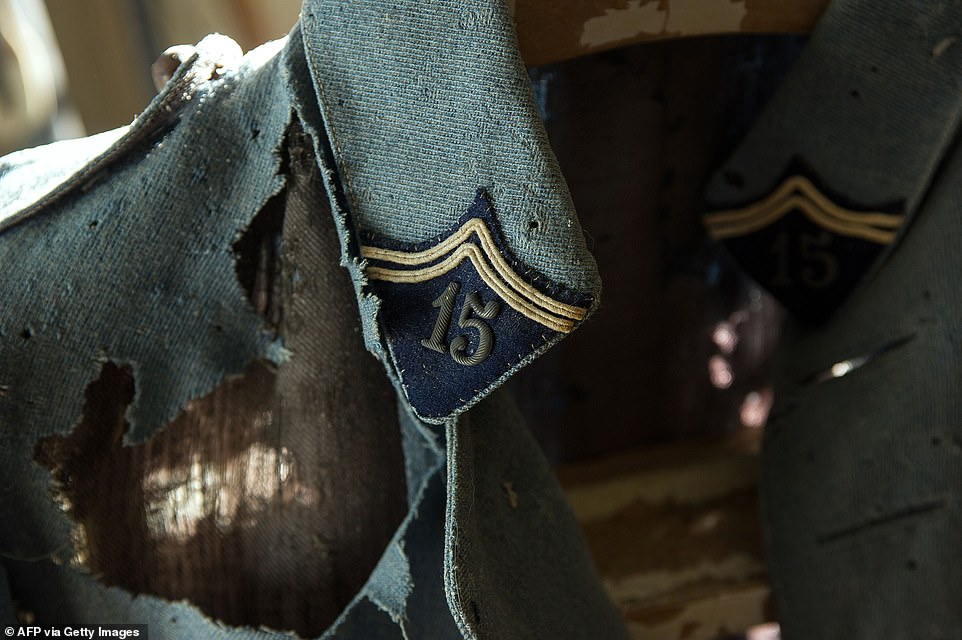 The moth-eaten military jacket he wore is pictured above, still hanging where he left it 102 years ago

General Bridoux’s granddaughter’s husband, Daniel Fabre, told French newspaper L’Express that he would keep the room in tact ‘not out of piety but out of respect’.

‘A sense of responsibility and perhaps pride certainly haunted this family of soldiers, one of whose ancestors had served as house marshal under Napoleon,’ he said.

Rochereau, who was born in 1896, received a posthumous croix de guerre for his courage in battle – which was placed on his bed by his parents before they left the house. He served with the 15th Dragoons based in Libourne, near Bordeaux.