Social media users have been left baffled after a photograph went viral showing landscape cereal boxes lined up on a shelf – rather than the traditional portrait packaging.

Taking to Twitter over the weekend, Laura Lexx, from Brighton, shared a snap from a local convenience store which showed a shelf filled with family favourites – including everything from Kellogg’s Crunchy Nut to Rice Krispies – alongside a caption which read: ‘Wtf when did cereal go landscape?’

And it wasn’t long before her initial post, which quickly garnered over 336,000 likes, was flooded with comments from shoppers across the nation.

‘I’m gonna answer your question with another question. Could you just swap the Mona Lisa to landscape? No. Don’t mess with art,’ wrote one, while a second penned: ‘The outrage here is that the only legitimately landscape cereal – Weetabix – has been placed in portrait orientation.’

Laura Lexx, from Brighton, shared a snap of a shelf filled with family favourites including everything from Kellogg’s Crunchy Nut to Rice Krispies

Alongside the image, Laura penned: ‘Wtf when did cereal go landscape?’ (pictured)

But while some were just outright confused by what appeared to be new, landscape packaging, others offered a possible explanation.

‘They’re special boxes for corner shops etc where they don’t have as much shelf space,’ explained one.

However, questioning the validity of the theory, one person pondered: ‘Surely landscape takes more shelf space per box? What am I missing here?’

In response, the other responded: ‘Vertical space. Look how close the shelves are to one another. There’s no way you could get portrait cereals in there.’ 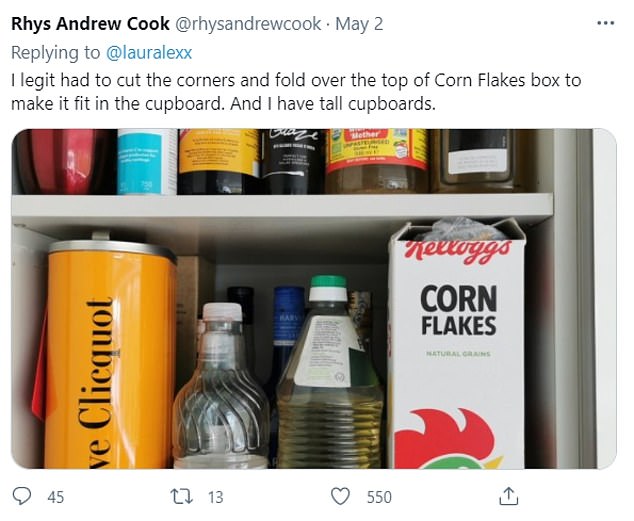 Taking to Twitter, one person joked: ‘The outrage here is that the only legitimately landscape cereal – Weetabix – has been placed in portrait orientation’ (pictured)

And many were in agreement with the local convenience store theory, with another writing: ‘Makes them easier to stack for small retailers.

‘If you flip ’em they’re portrait on the other side – and the box still opens the normal portrait way up, regardless of how they’ve been stacked.’

A third added: ‘Turn the box over and they are portrait. These are specially designed packets for convenience stores. Notice also the prices on the packets.’

Elsewhere, a fourth noted: ‘The price marked boxes are aimed at convenience stores where most customers do a ‘big shop’ elsewhere. Also they are large boxes not medium.’ 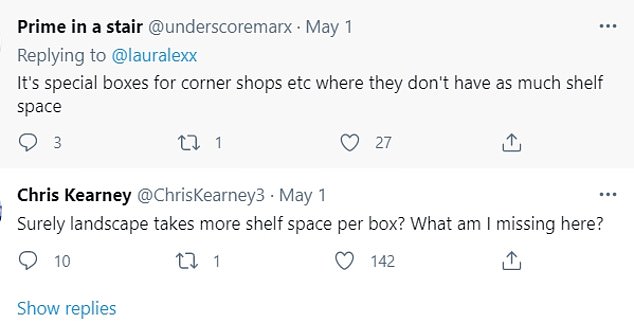