With the nation waking up to yet another day of uncertainty as several critical swing states are still in play, Americans are turning to social media for some much-needed light relief.

Twitter and Instagram has gone into overdrive with memes mocking the slow counting of ballots as the election hangs in the balance of votes yet to be tallied in Arizona, Nevada, Georgia, North Carolina and Pennsylvania.

Nevada is bearing the brunt of the jokes as going in to Thursday morning it still had roughly 25 percent of ballots left to tally after it temporarily suspended vote counting overnight for a second night.

The state, which is expected to swing toward Joe Biden and where Donald Trump has filed a lawsuit, will report its results at 12 EST today.

Nevada carries just 6 electoral votes but counters in the Silver State – many of whom are local volunteers – have found the spotlight of the nation on them as those votes could spell victory for Biden.

Biden currently leads with 264 of the 270 electoral college votes needed to claim the White House, meaning Nevada’s 6 would take him to a win.

He is currently leading by around 7,000 votes – less than 1 percent – in the state, where people have voted Democrat for the last 16 years.

However, Biden’s tally of 264 includes Arizona which Fox News and the Associated Press called for him early on Wednesday while votes were still being counted.

The state holds 11 crucial college votes but, since it was called, Trump has narrowed Biden’s comfortable lead in the state leaving the outcome now up in the air.

If Biden holds Arizona, he would only need to win one of either Nevada, Georgia, North Carolina or Pennsylvania to claim victory.

Pennsylvania has already said all counting won’t be completed until Friday once all mail-in ballots come in. While, Georgia and North Carolina are both tilting in favor of Trump.

This means all eyes are on Nevada and the volunteers in the counting centers processing the state’s votes, and impatient social media users are poking fun at the length of time being taken to get results. 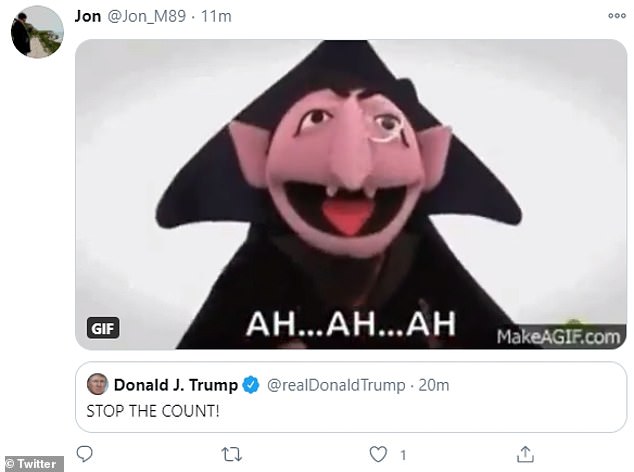 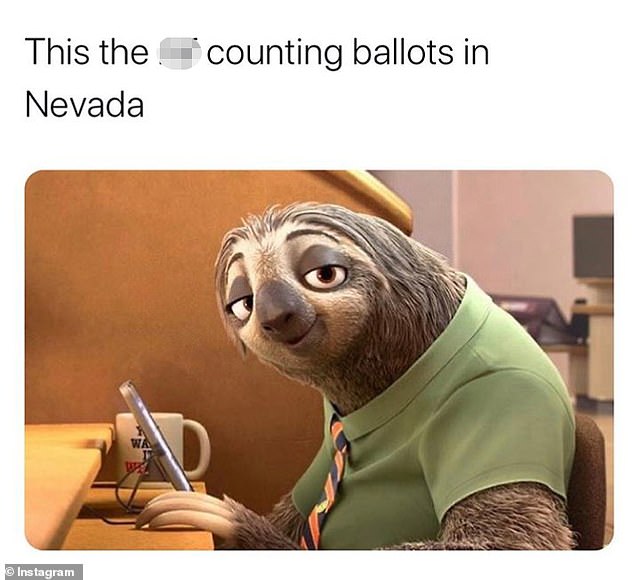 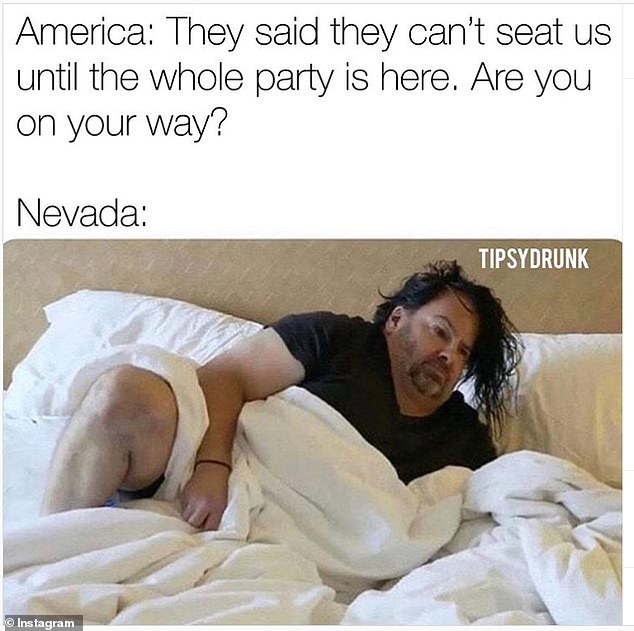 With the nation waking up to yet another day of uncertainty as several critical swing states are still in play, Americans are turning to social media for some much-needed light relief

One person shared an image of the character Flash Slothmore – the sloth from Disney film Zootopia – smiling with the phrase: ‘This is the mf counting ballots in Nevada.’

The iconic moment in Titanic where Rose says ‘it’s been 84 years…’ since she sailed on the doomed vessel was also a fitting example of how voters feel with the counting rumbling on.

‘When Nevada finally finishes counting,’ someone wrote alongside the snip from the blockbuster film.

The state was also likened to the comical character Mr Bean by one user who shared a picture and wrote: ‘We all have that one friend who is late for everything.’

Another person shared footage of Judge Judy tapping her watch impatiently – a not so subtle aim at the state’s counting process.

Others poked fun at Trump’s efforts to derail the election as he has filed multiple lawsuits to stop counting in several states and pro-Trump supporters descended on a counting center in Maricopa County, Arizona, Wednesday to demand all votes are counted, while descending on a separate counting center in Detroit, Michigan to demand the opposite – that all counting stop.

One person posted a hilarious photo-shopped image of Trump sporting a wig, make-up and drop earrings as a disguise to get inside a polling station, alongside the caption: ‘I want to speak to the poll manager.’

Another compared the president to a Dracula Muppet character laughing ‘ah-ha-ha’.

In another meme, Joe Biden and former president Barack Obama were imagined poking fun at Trump. 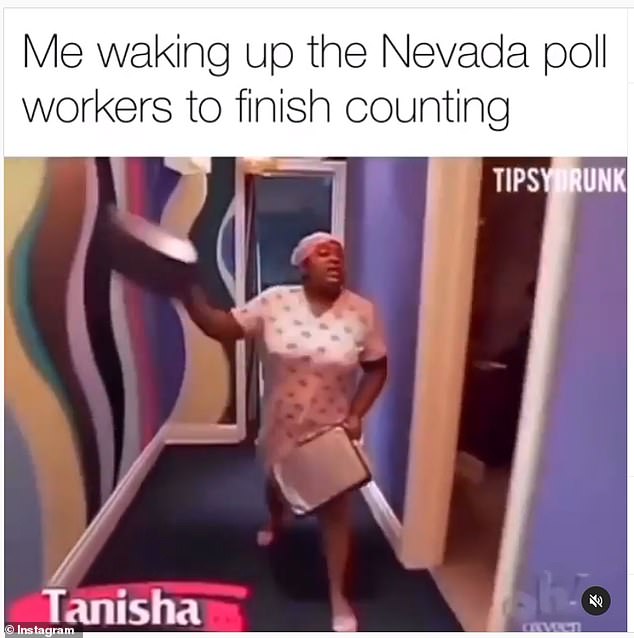 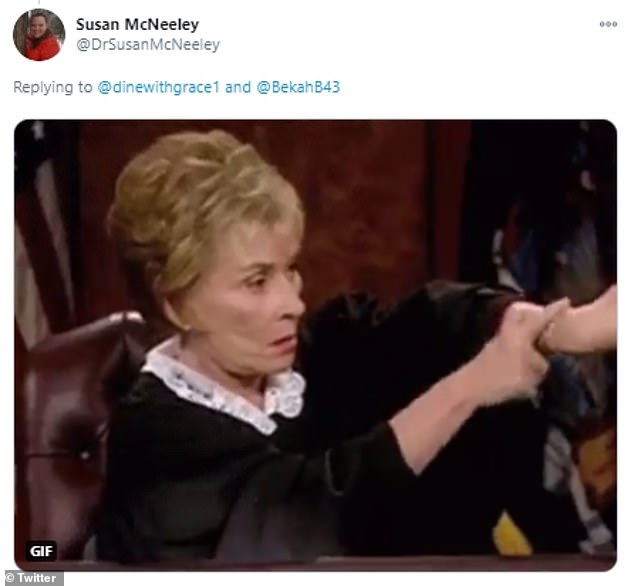 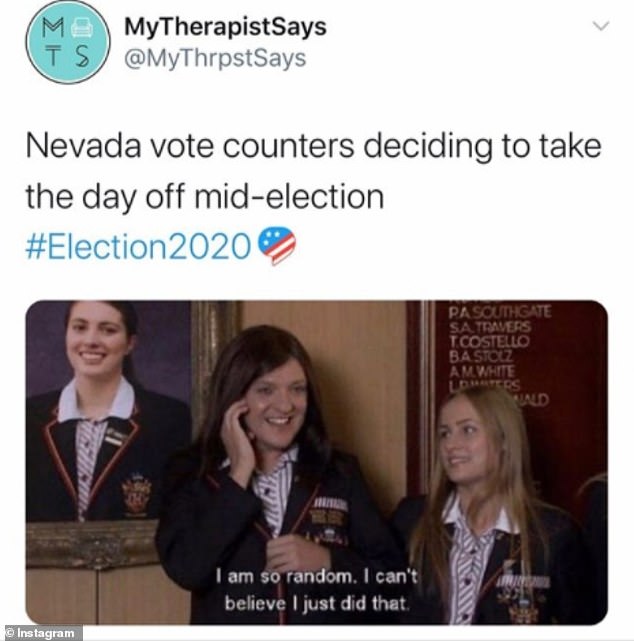 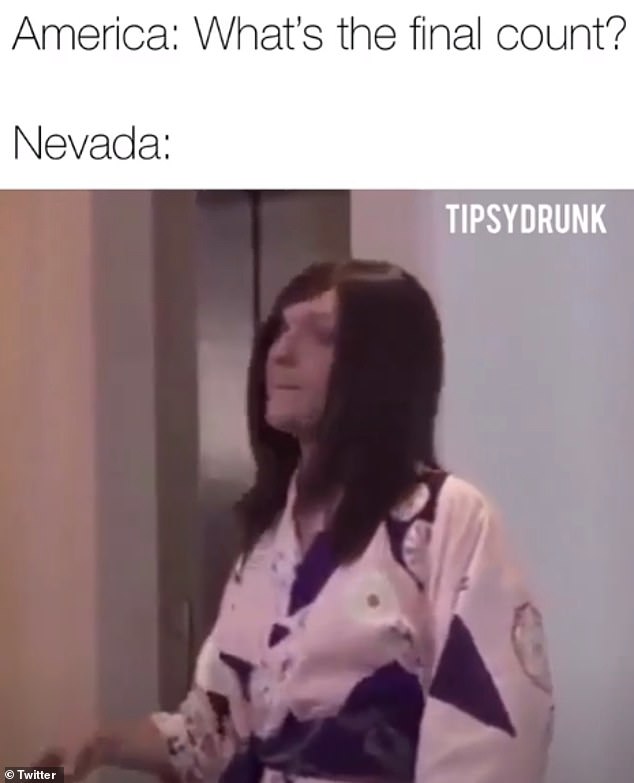 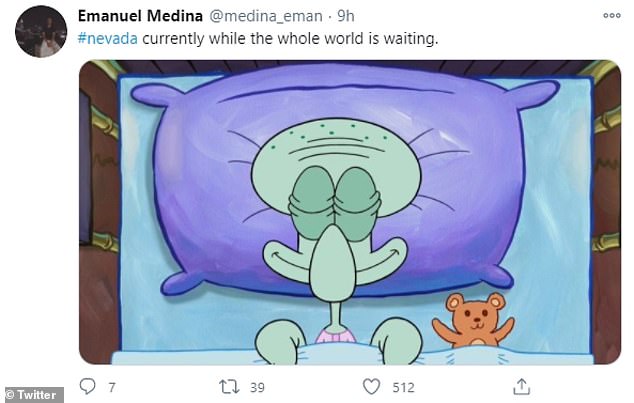 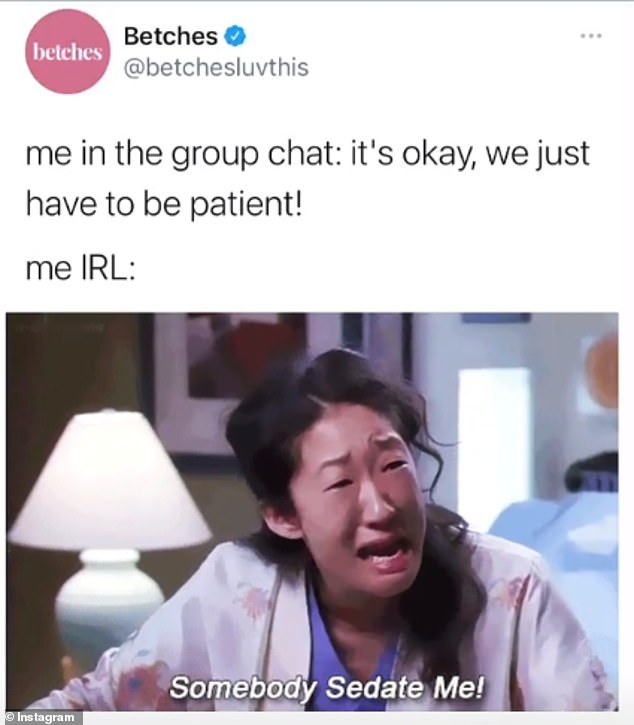 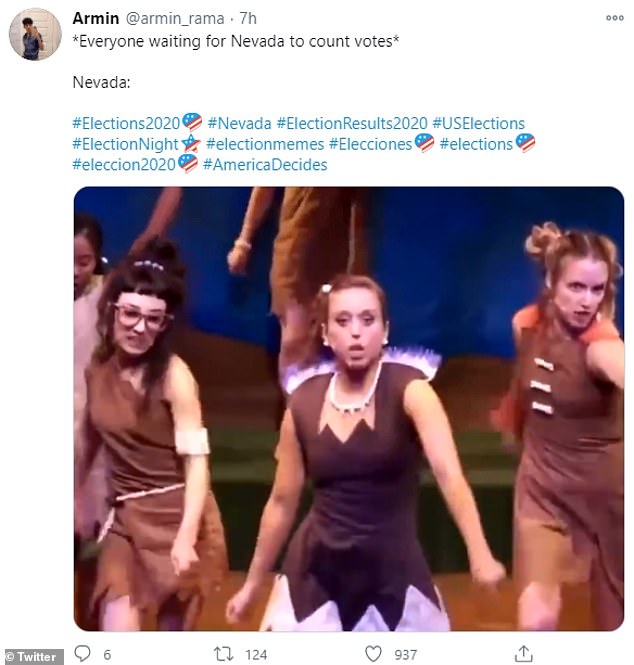 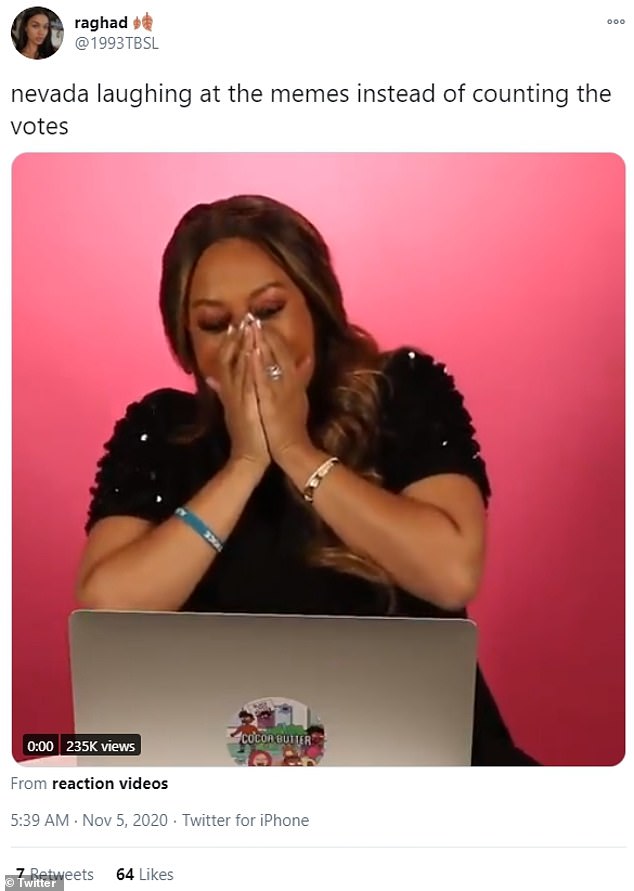 ‘Biden: You’d think he’d get why it takes so long to manually count ballots.

‘Obama: Why Joe. Biden: Small hands,’ read the meme alongside a snap of the pair, with Obama’s head in his hands.

Another social media user shared a meme of the iconic moment where Sandra Oh cried ‘Somebody sedate me’ in an episode of Grey’s Anatomy.

A new meaning was given to the phrase: ‘What happens in Vegas, stays in Vegas!’ with another person citing this as the tagline for ‘people in charge of counting votes in Nevada’. 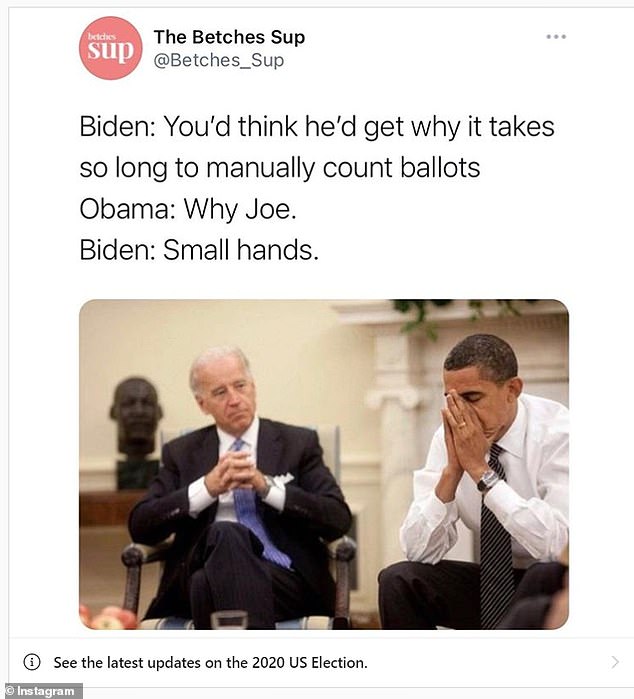 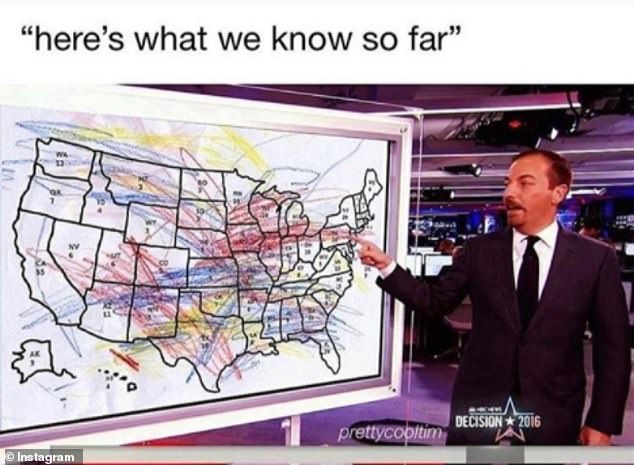 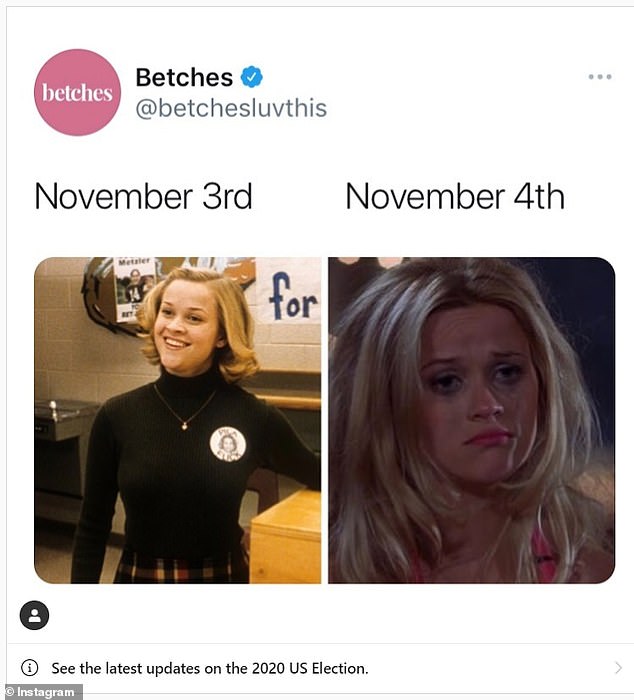 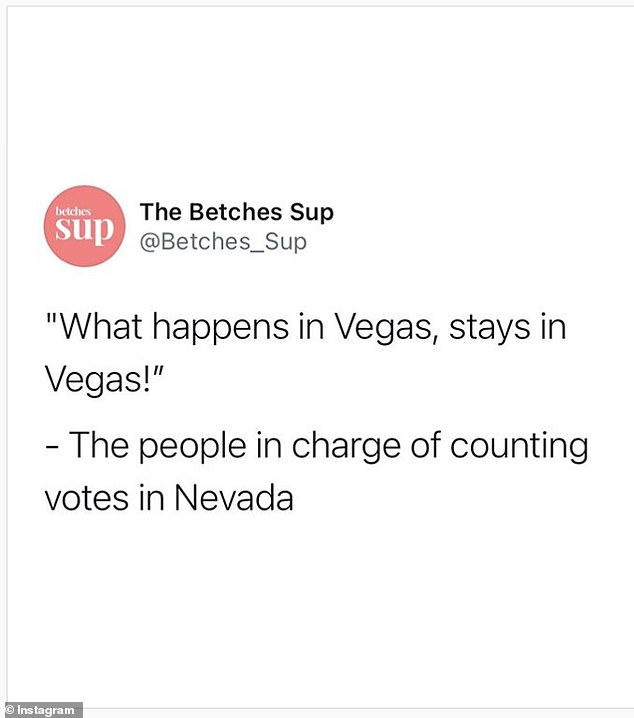 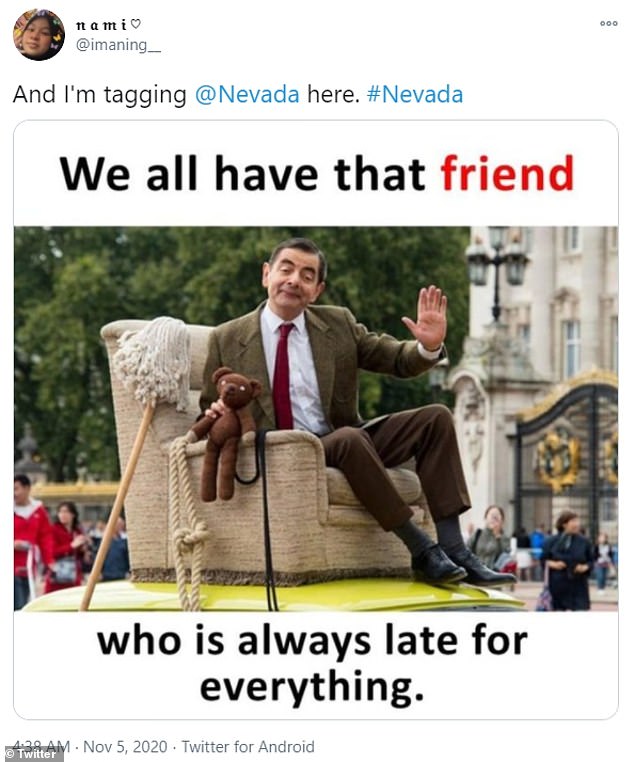 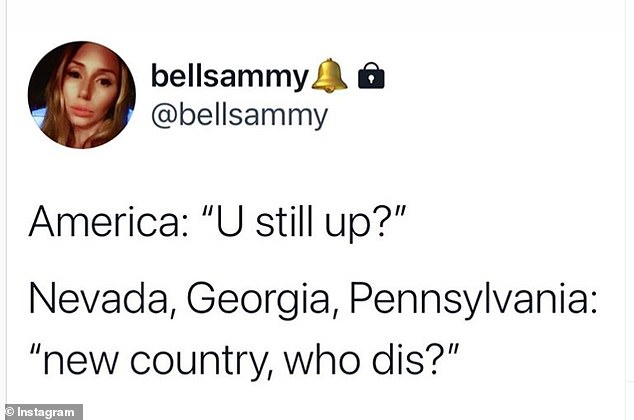 Another person likened the suspense to being on tabloid talk show Maury known for its dramatic on-air moments where guests take DNA tests to prove or disprove paternity or lie-detector tests to expose cheatning.

‘Feels like the whole country is on Maury waiting to find out who’s the father,’ they wrote.

‘I am so random. I can’t believe I just did that,’ the character says alongside the caption: ‘Nevada vote counters deciding to take the day off mid-election.’

The light relief comes as Trump demanded the nation stop counting votes in the presidential election as his campaign launched a lawsuit in Nevada Thursday which could hand Joe Biden the presidency should he win its six electoral votes.

Michigan, Pennsylvania, and Georgia as Biden approaches the 270 electoral votes needed to win the presidency.

In Wisconsin, a state called for Biden, the campaign has requested a recount.