Social media is causing petty playground spats among primary school pupils to escalate into serious violence – and even murder, a major report has found.

Arguments are continuing online after the school day has finished and ‘amplifying’ as children are goaded by their peers watching online.

Rather than petering out naturally, researchers said there was an expectation for the threats to be then carried out in the real world.

The three-year study by Crest Advisory found the problem was made worse by children being ‘routinely exposed’ to violent videos and adverts for weapons on the platforms.

It highlighted the murder of 13-year-old schoolboy Olly Stephens, whose trial heard how he was knifed to death in an attack both motivated by, and planned on social media.

Schoolboy stabbed to death after a row on social media

Olly Stephens was stabbed to death last year after a row both caused and coordinated on social media.

Reading Crown Court heard how the 14-year-old was lured to a park and knifed by two boys just a year older than him just metres from his home.

Olly was said to have taken a screenshot of a younger boy being humiliated that was posted on social media and shared it with the boy’s brother to try and protect him.

The middle-class defendants – who posed as wannabe gang members online – saw this as an excuse to seek retribution and planned to force him to apologise in footage online.

After exchanging messages on Snapchat planning the attack, they enlisted a 14-year-old girl – who was known to have fallen out with Olly – to bring him to the park.

The online threats leading up to Olly’s stabbing formed the central plank of the case against the trio.

The three defendants were sentenced to a total of 24 years in prison in September last year. None can be named for legal reasons.

Responding to the report, Olly’s mother Amanda said: ‘Our children live in an online world that means danger is close, it’s under your roof, it can attack them 24 hours a day, there is no respite from its harm.

‘The Government should listen to the findings from this report when they bring back the Online Safety Bill. Social media companies must be held accountable for the safety of children using their apps.’

The report, titled ‘Fixing Neverland’, has called for a ‘five star’ safety rating system for platforms to be added to the Online Safety Bill, to help parents decide which are suitable for their children.

Among its other recommendations were compulsory age verification and an ‘alerts’ mechanism to warn parents, police, and teachers about threats on social media.

Joe Caluori, head of research and policy at Crest Advisory, said: ‘Children and young people spend increasing amounts of time in unregulated, unsupervised online spaces which are accessible to them at ever younger ages.

‘Many of the dangers and risks children face have migrated into these online spaces, hidden from the eyes of parents and carers, teachers, police or social workers.

‘Our research shows that parents of primary school aged children are unprepared for the risks their children face online, including petty spats which are allowed to escalate quickly, resulting in serious violence, causing life changing injuries and even death, as in the tragic case of Olly Stephens.’

The report, funded by charity The Dawes Trust, accused both the government and tech companies of a ‘collective blind spot’ over the impact of social media on youth violence, with most research focusing on urban gangs.

Social media was found to drive violence among children in the wider population, with conflicts between pupils no longer ending with the school day but continuing online after.

Arguments escalated faster as users felt more emboldened to be offensive online and the ease in which they could post immediately.

The report highlighted the problem of ‘digital spectators’, their peers watching online who they might want to impress or would goad them on to seek revenge.

It added: ‘Rather than dying down over time or with distance, as you might have expected in a pre-social media world, the end of the school day or week builds anticipation of what might follow when the individuals in conflict do eventually encounter each other face-to-face. 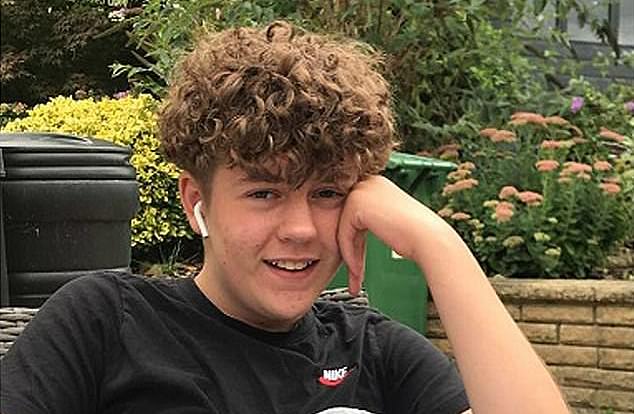 The three-year study by Crest Advisory found the problem was made worse by children being ‘routinely exposed’ to violent videos and adverts for weapons on the platforms. It highlighted the murder of 13-year-old schoolboy Olly Stephens (pictured), whose trial heard how he was knifed to death in an attack both motivated by and planned on social media

‘There is an expectation that threats made online should be followed through in person.

‘If a young person who has threatened someone else online does nothing when the opportunity arises, then the original humiliation is compounded with the fear that they’re social status will slide as they’re labelled someone who is ‘all talk’.

The report found the ‘sheer scale and rapid pace of development of social media’ made it harder for adults to protect children.

The Online Safety Bill, which is set to continue through parliament shortly, will impose a duty of care on social media giants. 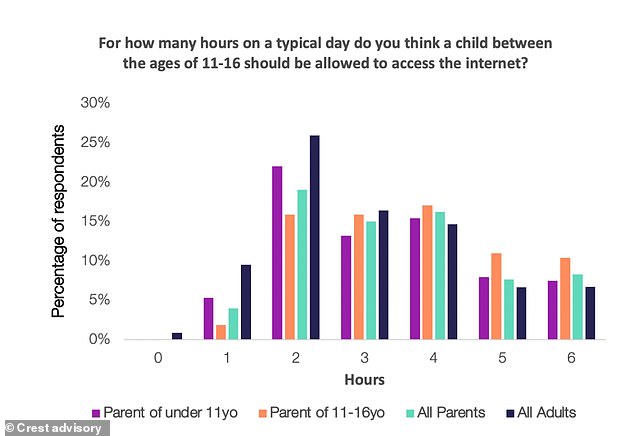 When asked how many hours a day children and young people aged 11-16 should be allowed access to the internet through their device, the most common response was a limit of two hours, selected by just over a quarter of respondents. Just 16% of parents with children aged 11-16 selected this option, perhaps reflecting the realities of enforcing limits with teenagers

Ofcom will act as watchdog and have the power to hand out hefty fines of up to ten per cent annual turnover – or even block sites from being used in the UK.

The report called for a ‘five star’ rating system, which will indicate how safe social media platforms are for children, to be compiled by Ofcom and added to the Bill.

Among its other key recommendations are for compulsory age verification for platforms through a standardised national system.

It also calls for an ‘Ofcom alerts’ mechanism so parents, carers, and practitioners can be warned about threats on social media platforms from systemic failures to security breaches.

Bullying can affect everyone; those who are bullied, those who bully, and those who witness bullying.

Bullying is linked to many negative outcomes including impacts on mental health, substance use, and suicide.

It is important to talk to children to determine whether bullying, or something else, is a concern.

Children who are bullied

Children who are bullied can experience negative physical, school, and mental health issues.

Children who are bullied are more likely to experience:

Depression and anxiety, increased feelings of sadness and loneliness, changes in sleep and eating patterns, and loss of interest in activities they used to enjoy.

These issues may persist into adulthood.

They are more likely to miss, skip, or drop out of school.

A very small number of bullied children might retaliate through extremely violent measures.

In 12 of 15 school shooting cases in the 1990s, the shooters had a history of being bullied.

Children who bully others

Childrens who bully others can also engage in violent and other risky behaviors into adulthood.

Children who bully are more likely to:

Children who witness bullying are more likely to:

The Relationship between Bullying and Suicide

Media reports often link bullying with suicide. However, most youth who are bullied do not have thoughts of suicide or engage in suicidal behaviors.

Although children who are bullied are at risk of suicide, bullying alone is not the cause.

Many issues contribute to suicide risk, including depression, problems at home, and trauma history.

Additionally, specific groups have an increased risk of suicide, including black and minority ethnic, lesbian, gay, bisexual, and transgender youth.

This risk can be increased further when these children are not supported by parents, peers, and schools.