‘How convenient!’: Social media explodes with memes at news that Boris Johnson and Rishi Sunak don’t have to self-isolate after being pinged as Covid contacts because they are in pilot testing scheme

Social media has exploded as people have expressed their frustration over Boris Johnson and Rishi Sunak not having to self-isolate because of a convenient pilot testing scheme.

The pair were both pinged by the Test and Trace app telling them to self-isolate after Health Secretary Sajid Javid tested positive for coronavirus.

They are to use a little-known pilot scheme which allows people out of self-isolation every day of they pass a lateral flow test to continue working.

And social media users have vented their anger because the scheme isn’t available to the majority of the British public.

The Health Secretary triggered fears of a disruptive ‘pingdemic’ striking at the heart of Government after reveling yesterday he has tested positive.

One insider warned that ‘half the Cabinet’ could be in isolation by the end of the week. 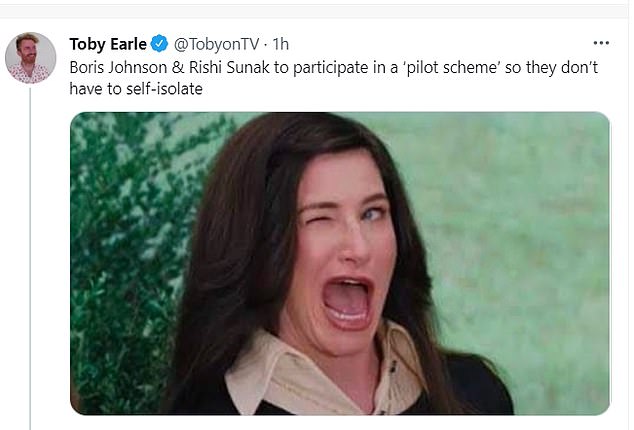 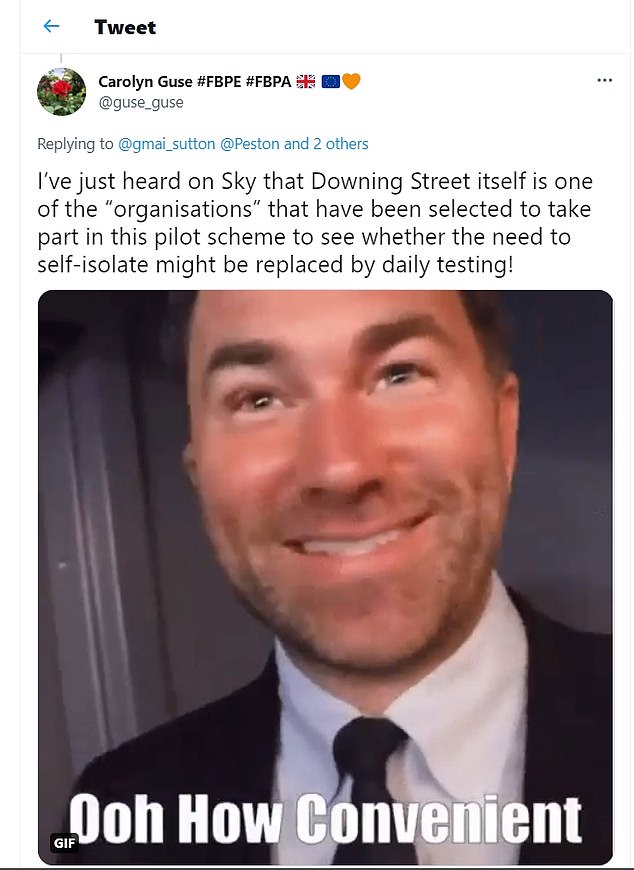 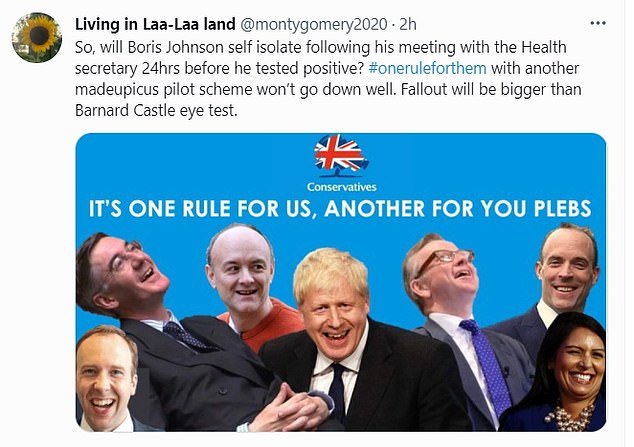 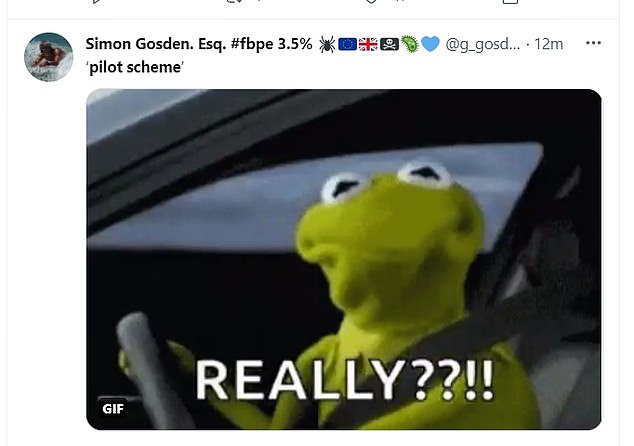 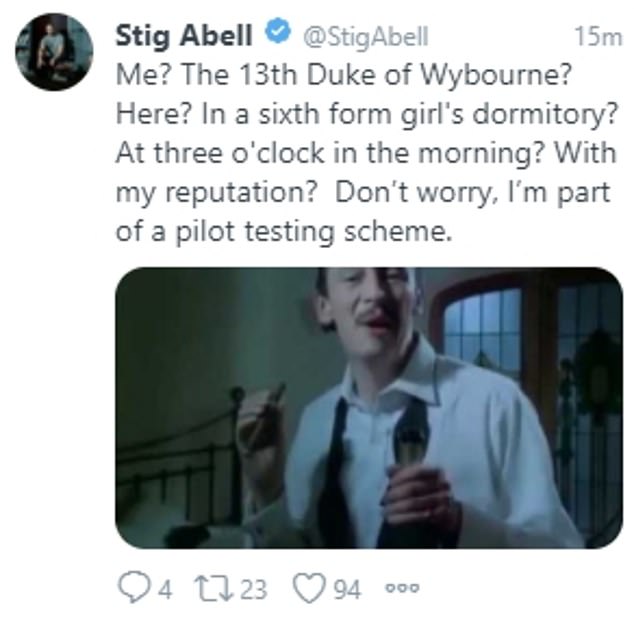 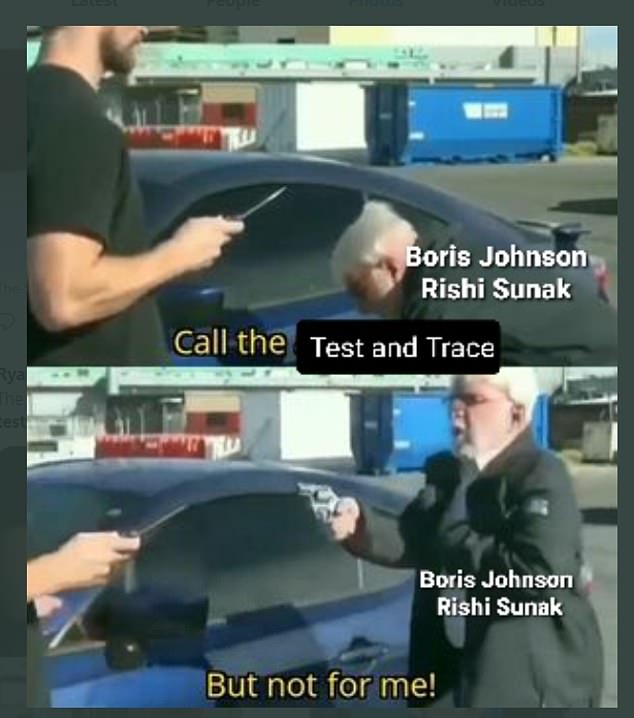 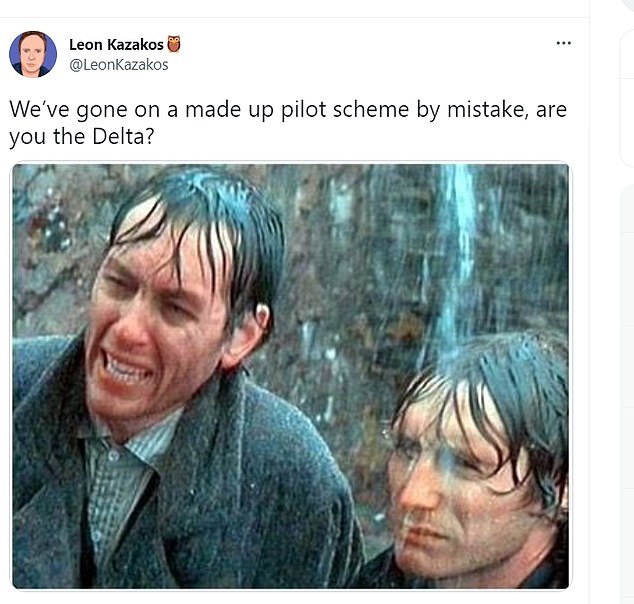 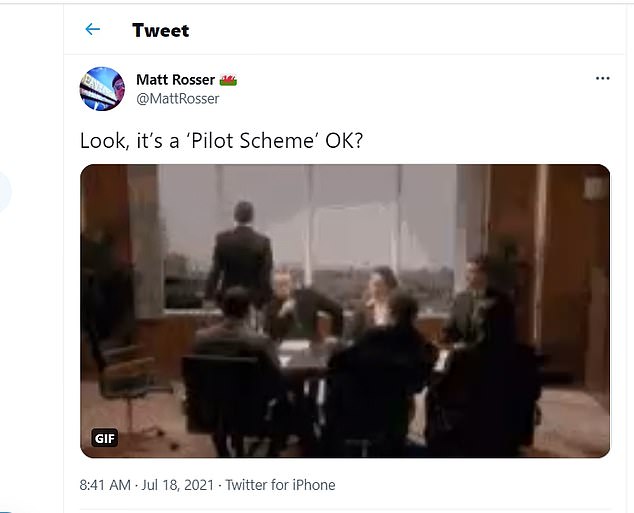 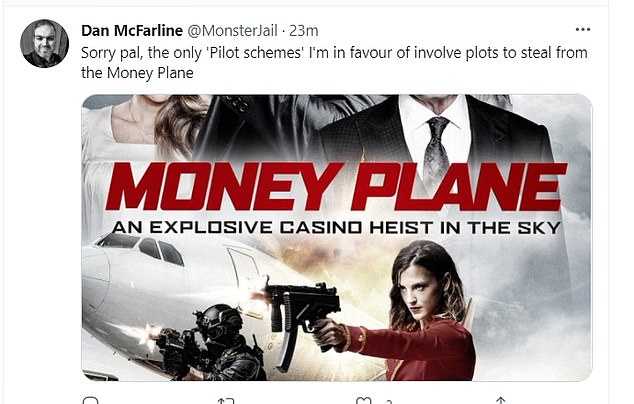 But this morning No10 said Mr Johnson would take advantage of the scheme not widely available to the public, leading to accusations they were using a ‘VIP lane’ while ordinary families struggled.

‘The Prime Minister and Chancellor have been contacted by NHS Test and Trace as contacts of someone who has tested positive for Covid’, a spokesman said.

‘They will be participating in the daily contact testing pilot to allow them to continue to work from Downing Street. They will be conducting only essential government business during this period.’

One social media user wrote: ‘So, will Boris Johnson self-isolating following his meeting with the Health Secretary 24 hours before he tested positive? One rule for them with another madeupicus pilot scheme won’t go down well.

‘Fallout will be bigger than Barnard Castle eye test.’

How does the pilot scheme work?

The daily contact testing study is being run by Public Health England to determine the effect of allowing people to avoid self-isolating.

It was launched in April and has already been used by Michael Gove, who was alerted after travelling to Portugal for the Champions League final.

It contains two groups. One is a test group who get one PCR test and have to isolate as normal even if it is negative.

But a second group is given a daily lateral flow test and members are allowed to leave isolation each day afterward if it is negative.

Only participants in the daily testing group who continue to test negative and do not have symptoms are excused from the legal duty to self-isolate each day,’ the Government said as it was announced.

‘Participants in the daily testing group will have a legal duty to tell their employer that they’re taking part in the study, and if they stop taking part for any reason.’

And another wrote, ‘I’ve just heard on Sky that Down Street itself is one of the ”organisations” that has been selected to take part in this pilot scheme to see whether the need to self-isolate might be replaced by daily testing!’ above the words, ‘Oooh, how convenient’.

The move triggered a furious backlash as rules forcing close associates of Covid cases to self-isolate for 10 days threaten to bring Britain to its knees.

The NHS has warned of staff shortages, unions say factories could start closing with in days and there are fears over some food supplies.

Yesterday parts of the London Underground were forced to cease running due to a lack of staff.

‘For many of them, waking up this morning to hear that there is a special rule, an exclusive rule, for Boris Johnson and Rishi Sunak, they will be saying that this looks like one rule for them and something else for the rest of us,’ he told Sky’s Trevor Phillips on Sunday.

Mr Ashworth continued: ‘Nobody understands how you can get access to this special treatment or VIP lane where you don’t have to isolate yourself.

‘I do think a lot of people are going to be looking at this and thinking ‘what on earth is going on?”

Mr Ashworth added: ‘This is at a time when we need to maintain confidence in the isolation policies, because isolation, taking yourself away from society if you’ve been in contact with someone who’s got the virus, is one of the key ways we break transmission and, of course, we know infections are rising.’

Communities Secretary Robert Jenrick said members of the public who are pinged should still self-isolate.

He said the test-and-release pilot being used by Mr Johnson and Mr Sunak was being trialled by about 20 public sector organisations including Border Force and Transport for London.

He said the two minsters would be tested at a special testing centre which has been set up in Downing Street.

‘It is correct that the Cabinet Office and Downing Street are part of the pilot. I am not aware that other (government) departments are,’ Mr Jenrick told Sky News.