While there have certainly been some intense training drills at the FIFA World Cup so far in Qatar, the Socceroos squad took some time out in the leadup to their knockout match against Argentina to take things a bit easier.

Out came the trusty wheelie bin with the players lining up to see who could chip the ball up and into the trash disposing icon of Australian culture.

For international readers who may not know what a wheelie bin is, it is a an outdoor rubbish bin on wheels commonly known as a dumpster in other countries.

You could tell it has been many years since this crop of Socceroos have been forced to practice their skills in such a backyard fashion, with most coming well short of the mark.

But one suspects that Miloš Degenek has been putting a shot or two up after bin collection day in recent times.

On his first attempt, the defender calmy plonked the ball straight into the wheelie bin, pointing his finger to the heavens, removing his shirt and taking a victory lap.

As Jason Cummings and Mitch Duke – who scored the match-winning goal for the game against Tunisia – put up wayward shots, it seemed this was a game best left to the defenders with Bailey Wright also making light work of the task.

That had the Socceroos boys calling for Degenek to see if he could make lightning strike twice.

As he pulled his shirt back on, Degenek said to his teammates:  ‘I can’t do it twice’.

He proved himself wrong, though, walking up to the mark and putting the ball in the bin – although he had to rely on a bit of luck.

The ball hit the rim of the bin, bouncing straight back up in the air, before falling safely back into the bin for his second ‘goal’ and another celebration lap. 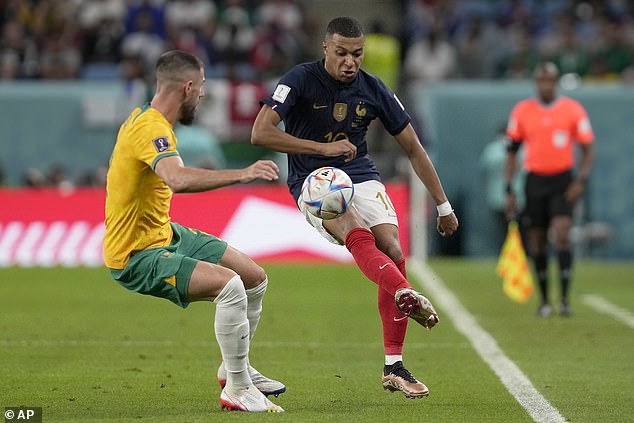 ‘I hope Messi doesn’t see this,’ warned another.

‘Every team has a fun session after the proper training session, it helps team chemistry,’ another fan replied.

Australia will play Argentina in their knockout match in the round of 16 at the FIFA World Cup in Qatar at 6am AEDT.