Craig Goodwin has given Australia the most unlikeliest of starts against reigning worlds champions France, finishing off a stunning team goal at Al Janoub Stadium on Wednesday morning.

It was the Socceroos first goal in open play since Tim Cahill’s iconic volley at the 2014 World Cup – a full 438 minutes of football ago.

A pinpoint long ball from the lanky Harry Souttar at centre back found Mathew Leckie on the right wing, whose deft first touch saw him easily round the French defence. 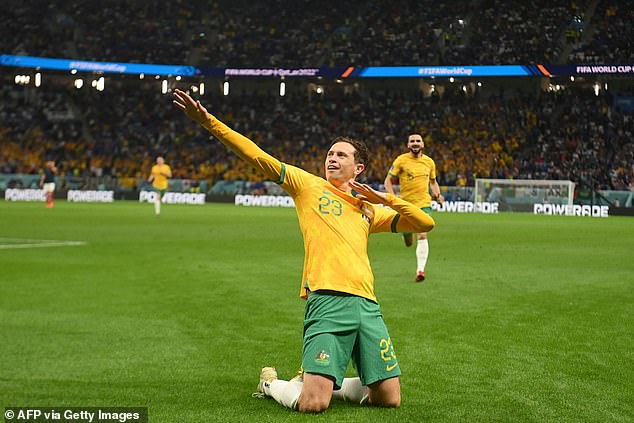 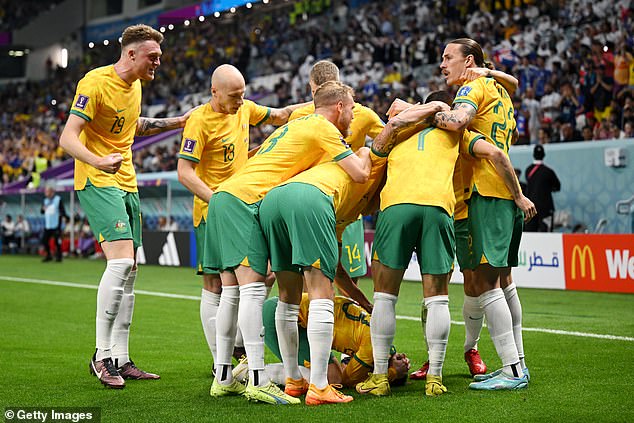 Socceroos players gather around Goodwin, who was in a state of shock, disbelief and happiness, after his goal

On the back of a shock win to Saudi Arabia over tournament favourites Argentina, it is proof really anything can happen at a World Cup.

Not even the most ardent of Aussie supporters could have imagined scoring a goal against France, let alone one in open play that had absolutely nothing to do with luck or a foul from the opposition.

Fans collectively lost their minds over the astonishing goal to Goodwin, and it’s build-up, with Australian Prime Minister Anthony Albanese quick to write ‘Go Socceroos’, accompanied by a pair of green and gold heart emojis.

After a particularly rousing rendition of Advance Australia Fair pre-game, there were extraordinary scenes at Federation Square watch party as Aussie supporters were filmed going completely bonkers in reaction to Goodwin’s goal.

The electrifying reaction to the Socceroos’ first goal against France has been captured in Melbourne. #9News | WATCH LIVE 6pm

Fans were even losing it on the 6.09am train from the Central Coast to Sydney over the incredible start. That’s how football can unite people when it isn’t so concerned about excluding people (looking at you, FIFA).

The commentators on the SBS broadcast were equally as incredulous and joyous as the supporters.

‘Oh, my god! A ball from Souttar. Fantastic ball. Leckie, what a touch, being able to take it past that defender and put that ball on the six yard line. That is the cross, exactly where you want to put a cross. Goodwin, as any good winger, is on the back post to stick it away,’ the callers said.

‘That is a sweet as it gets from Craig.

‘And he had to fight to be fit for this World Cup, Craig Goodwin. An amazing moment, and look at the quality. From Matthew Leckie, in behind, perfect in delivery and execution.’ 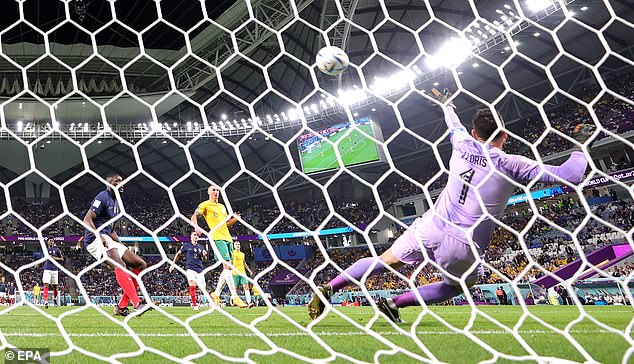 ‘The French bench are stunned … and a stunned silence at Al Janoub Stadium. The reigning world champions down a goal and Australia full of great energy and belief,’ callers could be heard saying on the broadcast.

Many were keen to point out the remarkable journey of Goodwin to be playing football on the greatest stage of all, too. He has not had the silver spoon journey to a nation team so many do.

Goodwin’s first major heartbreak in football came as a youngster when we was overlooked for South Australia’s under 15s side despite featuring at under 13 and 14 level. 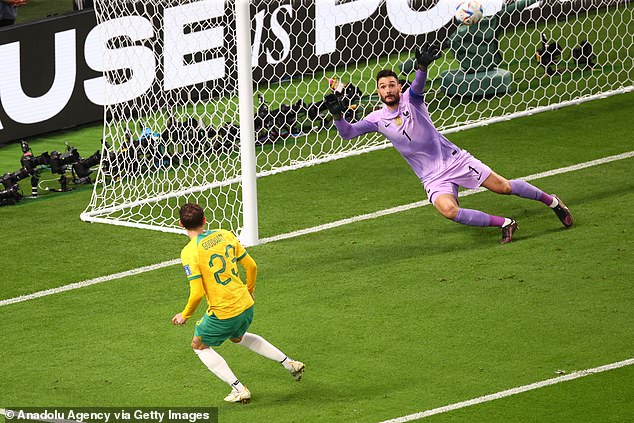 The Adelaide-native was left angry, hurt and frustrated – but it would not be for the last time.

Rejection, bad luck and a cancelled youth program continued to foil Goodwin as he sought a spot at a UK academy, before his current club Adelaide United rejected his press for a senior spot.

He then left to play in the NPL in Victoria with the Oakleigh Cannons (whose theme song was heard reverberating around Al Janoub Stadium) – and was forced to work for KFC in order to make ends meet.

‘There were times I had to find coins around the house to pay for petrol to get to training. The money I was earning wasn’t enough to cover my rent, groceries, phone, the car and whatever else,’ he wrote for Athlete’s Voice in 2018.

In fact, when he made his A-League debut, for the now-defunct Melbourne Heart, he was STILL working at KFC.

From working at KFC to make ends meet while playing in the NPL to opening the scoring v France at a World Cup. Craig Goodwin take a bow what a finish, what a start! #FRAvAUS

Sitting in a pub in Sydney as an Adelaide boy and watching my home town captain scoring for the Socceroos has made me feel so proud!

What a start to this game!!!
Should I try to get a Craig Goodwin chant going? Haha

And now here Goodwin is, announcing himself to literally billions of people all over the world.

Unfortunately for the Socceroos, France were ahead 2-1 by just the 32nd minute mark, after easy goals to Adrien Rabiot and Olivier Giroud.

The French are too quick, too skilful – but they don’t have the Boxing Kangaroo spirit on their side, do they.