EXPRESS INFORMER > Business & Finances > So could a sleeping bag you wear get you through the winter?

Back in September, I vowed that I would delay turning on the central heating for as long as I could bear — or until my children’s howls of protests became intolerable. In a bid to stop my energy bills bankrupting me, drastic action was needed.

How long could I last without touching the thermostat? I secretly thought I might cave in before the clocks changed, or certainly by Guy Fawkes Night.

But — to my surprise — I am still holding out; my wife is (mostly) supporting me and the children’s complaints are only at grumbling, rather than caterwauling level.

Thermal ratings: Writer Harry Wallop (pictured) and his family have been trying out various items designed to warm the body – rather than the room

It’s true the 17-year-old is ostentatiously wearing his outdoor coat inside, claiming he is too cold to do his homework without it.

But I think this is his way of protesting at his father, rather than being genuinely uncomfortable from the lack of heat.

Admittedly, until a week ago, autumn has been mild. The Met Office says the UK mean temperature was 11.5c in October — 1.8c above the long-term average.

It turns out I am not the only one to have turned down — or turned off — my thermostat.

Energy analysts BFY estimate the amount of gas we used in the UK was 19 per cent lower compared with typical usage in October.

But it is not just the milder weather that has helped. The other reason my family is coping is the fact we have been trying out various items designed to warm the body — rather than the room.

This is my key tactic for surviving without firing up the boiler. Putting the central heating on for just six hours in a typical household (with 2.4 people, not the five we have), costs £6.76, according to calculations by financial publisher Bloomberg. But a typical heated blanket costs 30p to run for six hours.

Lots of companies, from Argos and Currys to specialists such as Lakeland and Silentnight, have developed an increasingly large range of heated products. There are throws and ponchos, electrically warmed slippers and neck warmers.

Some of them are just gimmicky, while others are fantastic at enveloping you in heat, even though the rest of the room is parky.

Temperatures have yet to fall to winter-levels of cold, but our house is starting to get fairly chilly in the evenings. As a family, we have road-tested six products, and it is revealing which ones we fight over to wear while watching television, and which have been discarded. 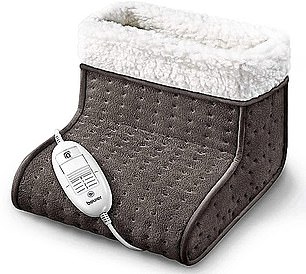 Does it use electricity? Yes

Is there anything more miserable than cold feet? No. This, in theory, is the perfect solution for people working at a desk. Take off your shoes and slip your feet into this contraption. It plugs in and has three heat settings.

On the highest, it’s only moderately warm, rather than toasty hot. Maybe that is because it uses very modest amounts of power (100W), which means it costs just 3.4p an hour to run. However, it’s not very well made, with the thin fleece lining coming unstuck from the main ‘shoe’. 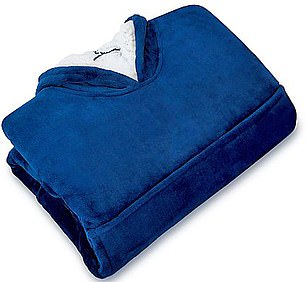 There are lots of versions of this wearable blanket being sold this year. This one is pretty unglamorous but, gosh, it’s brilliant.

A big poncho made of thick, fleecy polyester, it slips on easily over your clothes and immediately warms you up in the most comforting way. Coming to mid-thigh level, it does not constrict you nor make you look a complete fool if you answer the door in it.

It will be my staple outfit this winter — if I can wrestle it off my wife (‘life-changing’ is her verdict) and my ten-year-old. 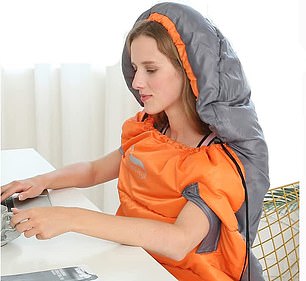 My daughter says this makes me look like a caterpillar — and a not very happy one. It’s made by a company called Desert Fox and is a sleeping bag with arm holes and a zip, allowing you to free your feet if you need to walk anywhere.

However, it is poorly designed — the arm holes are too small, the bag slips down your body when you’re sitting at a desk and to move across a room you have to shuffle clumsily.

The company’s claim that ‘it’s so convenient . . . [there’s] no need to take off the sleeping bag when reading, eating and other indoor or outdoor activities’ is optimistic at best. 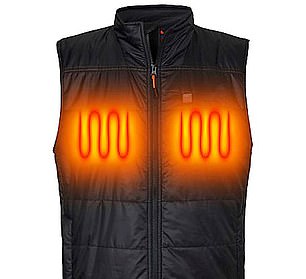 Does it use electricity? Yes

This is very clever. It is a thin, quilted gilet which, thanks to a matchbox-sized battery (which tucks into a pocket and plugs into an internal wire), heats the jacket.

There are three settings and, on the highest, you get two hours’ heat before you need to recharge the battery, at a cost of just 1p. However, the heat is pretty localised — just on your chest and top of your back, not your lower back. For such a hefty price tag, I’d have hoped for more coverage.

Unlike the Desert Fox, this is a genuinely wearable sleeping bag, a giant romper suit made from recycled polyester.

If you want, you can cover pretty much every inch of your body, with hand coverings, a hood as well as detachable booties.

It is very efficient at keeping you warm and even has zippable air vents in the legs in case you get too hot.

However, it is bulky and couldn’t be described as stylish. But if you feel the cold, it may do the trick.

This is fantastic value and, in some ways, is brilliant — but it’s suitable for only one specific use: lounging on a sofa or chair.

That’s because it is no more than a fleecy hospital gown. Sure, your arms are kept warm thanks to sleeves and your feet have a little pocket to tuck into, but stand up (without tripping over) and you are left with an exposed back.

Go to make a cup of tea and you look like a cut-price ghost from Scooby Doo.

Still, the kids thought it was fun; it’s cheap, soft and folds into a cushion when not in use.

Why it may be time for a new dryer 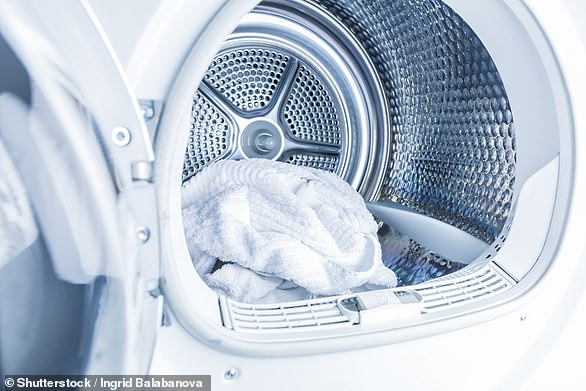 Clean up: An A++ tumble dryer may be more expensive to buy than less efficient machines but costs just £35.36 a year to run if used twice a week

The stark difference buying a top energy-rated tumble dryer makes to your energy bill has been revealed by Uswitch.

The comparison website found that a £499 Hotpoint tumble dryer carrying an A++ rating costs £35.36 to run over the course of the year, based on two uses per week.

Another Hotpoint tumble dryer with a C rating had a cheaper £259 outlay, but cost £198.80 for the same usage. While picking the pricier model won’t help reduce bills this year, it will over the longer-term.

Ben Gallizzi, energy expert at Uswitch, says: ‘Anyone in need of a new household appliance will pay close attention to the price tag.

‘But these days, it’s just as important to check the energy-efficiency label.’