Support for Scottish independence has plummeted amid the bitter row between SNP leader Nicola Sturgeon and her predecessor as First Minister Alex Salmond.

The majority of people in Scotland no longer want to break away from the rest of the United Kingdom following recent infighting, a bombshell survey has revealed.

The Survation poll, carried out for the Sunday Mail, concluded that support for independence has fallen from 58 per cent in the same poll carried out in October to just a 50 per cent split.

It is the first time in 22 consecutive polls that a Yes vote has not been favoured.

The row has broken out amid the ongoing Holyrood inquiry into the Scottish Government’s ‘botched’ investigation of sexual harassment claims against Mr Salmond. 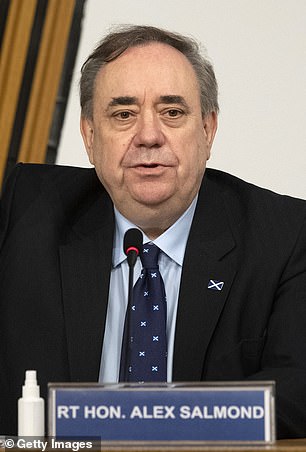 The survey, carried out on Thursday, asked 1,000 residents across Scotland how they would vote in an independence referendum if it was held tomorrow.

If those who were undecided are excluded from the statistics, support for the referendum was left at 50 per cent which is the lowest it has been in nine months.

The poll also revealed that 50 per cent believed Ms Sturgeon, who is due to give evidence to a committee of MSPs this week, should resign if she is found to have broken the ministerial code of conduct.

And a further 39 per cent believe there has been a Scottish Government cover-up over its disastrous handling of sexual harassment complaints against Mr Salmond.

It comes after Mr Salmond finally gave evidence to the specially created harassment committee at Holyrood after a protracted wrangle over the publication of his evidence, which saw him twice pull out of appearances. 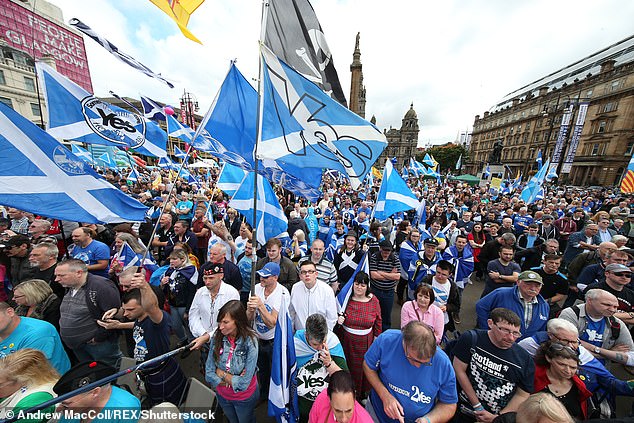 The majority of people in Scotland no longer want to break away from the rest of the United Kingdom following recent infighting, a bombshell survey has revealed. Pictured: Previous rally in Glasgow

What are the key issues in the row engulfing SNP?

How and why did the Scottish government mishandle allegations against Alex Salmond?

The Scottish government launched an investigation in 2017 after two women made formal complaints against Alex Salmond.

He launched legal action against the government’s handling of the investigation and won a judicial review in January 2019, receiving £512,000 to cover his legal fees.

The parliamentary inquiry is examining how ministers and civil servants conducted the probe.

Mr Salmond was charged with 13 counts of sexual assault, including attempted rape, but was acquitted of all charges in March 2020.

Mr Salmond has claimed he was the victim of a conspiracy by senior SNP figures to end his role in public life.

What did Nicola Sturgeon know and when?

Ms Sturgeon originally told MSPs she learned of complaints against Mr Salmond on April 2, 2018, when the pair met at her house.

That meeting is crucial as it is unclear whether it was SNP business, or government business – which should have been officially recorded.

Peter Murrell, the chief executive of the SNP and Ms Sturgeon’s husband, initially said he was not at home, but later revealed that he arrived home during the discussion.

He insists he did not ask what they were talking about.

Ms Sturgeon has also admitted she ‘forgot’ about a discussion with Mr Salmond’s ex-chief of staff four days earlier where they talked about the issue.

The ministerial code says that ‘ministers who knowingly mislead the parliament will be expected to offer their resignation to the First Minister’.

Ms Sturgeon is facing a separate independent investigation led by James Hamilton, who has to decide if she broke the ministerial code. However, it is thought that she is the final arbiter of whether the code has been breached.

Does Mr Salmond have evidence of a conspiracy against him?

Mr Salmond has said he is the victim of a ‘prolonged, malicious’ conspiracy by senior SNP and government figures.

He has suggested Mr Murrell was part of efforts to damage him.

Ms Sturgeon has demanded he presents hard evidence that is the case. However, he insisted that he is not in the dock and the government has already conceded it acted illegally.

Why was Mr Salmond’s evidence to the inquiry redacted?

Mr Salmond’s submission to the inquiry was released online on Monday, but the Crown Office raised concerns with Holyrood about it, asking for redactions.

He has raised questions about why the step was taken and whether it amounted to inappropriate interference.

It was the first time he had spoken at length about the Government’s probe into sexual misconduct allegations against him.

After he was cleared of 13 charges against nine women in March last year, he said evidence that he had not been able to lead during his trial at the High Court in Edinburgh would ‘see the light of day’.

And, earlier today, it was revealed Mr Salmond is set to launch a devastating second attack on Ms Sturgeon  – in a move which could force her to resign as First Minister.

He is due to give evidence in private on Monday or Tuesday to a second inquiry – set up to establish whether Ms Sturgeon has broken the Ministerial Code.

Ms Sturgeon is already set to face tough questioning from MSPs at the Holyrood inquiry on Wednesday – the same day the UK Budget is announced.

Last night, a source close to Mr Salmond said: ‘He will be able to say things in private which he hasn’t been able to mention up until now.

‘It will likely be damning and devastating for Nicola Sturgeon.’

Appearing before a Holyrood inquiry on Friday, Mr Salmond launched an astonishing attack under oath on Ms Sturgeon’s leadership – and accused her of multiple breaches of the Ministerial Code and of misleading parliament.

He disputed her account of their meetings at her home and said she was aware beforehand that they were arranged to discuss complaints to the Government about him.

However, he said he was unable to talk about some aspects of the crucial meetings because of legal restrictions.

Now he will give evidence to the second inquiry led by James Hamilton, QC.

If this probe establishes Ms Sturgeon broke even one of the rules governing ministerial conduct, she will face calls for her resignation – just weeks before the crucial Scottish parliament election.

Mr Salmond’s delivery of evidence to the Holyrood inquiry highlights the astonishing levels of bitterness that now exist between the former SNP leader and Ms Sturgeon – a pair who for many years seemed to have forged one of the most rock-solid partnerships in politics.

He also called for the resignations of Ms Sturgeon’s chief legal adviser, the Lord Advocate James Wolffe, and some of those closest to her, including her husband, the SNP chief executive Peter Murrell, Permanent Secretary Leslie Evans and her chief of staff Liz Lloyd.

Mr Salmond said some in the SNP and Scottish Government had been involved in a ‘deliberate, prolonged, malicious and concerted effort’ to put him in prison.

Sources have since confirmed he will speak directly to Mr Hamilton, the former director of public prosecutions in Ireland, by video link tomorrow or on Tuesday.

They said it could be even more devastating than the evidence he gave to the committee on Friday.

That is because he will not be limited in what he can talk about by the Crown Office and Holyrood lawyers.

It is also understood Mr Hamilton has received evidence from Geoff Aberdein, Mr Salmond’s former chief of staff, whose evidence to the Holyrood committee could not be published.

If that corroborates Mr Salmond’s version of events, rather than Ms Sturgeon’s, it could dramatically increase pressure on the First Minister.

The evidence is said to include claims she knew of harassment allegations ‘weeks earlier’ than she admitted.

It also suggests Ms Sturgeon’s team leaked the identity of a sexual assault complainant against the former first minister – which Ms Sturgeon rejects.