The Scottish National Party is at the centre of a criminal fraud probe amid claims cash donated to a £600,000 fundraising drive has gone missing.

Police Scotland said the investigation focused on seven complaints about donations and had been launched after consultation with prosecutors.

Detectives are looking at allegations that cash which was earmarked for campaigning for a second independence referendum has been diverted elsewhere.

The Tories voiced concern over the ‘increasingly murky’ affair which could see officers interviewing senior figures in the SNP.

The probe follows a series of resignations from the SNP’s ruling body in a row over the transparency of the party’s accounts.

The Scottish National Party is at the centre of a criminal fraud probe amid claims cash donated to a £600,000 fundraising drive has gone missing

Last night Scottish Tory chief whip Stephen Kerr said: ‘The SNP has failed to be fully transparent over this funding for months.

‘Senior figures have resigned from the party’s executive committee over the matter but the SNP leadership have still not addressed these serious claims.

‘The public to deserve to know the truth. It is only right that Police Scotland are stepping up their investigations having received numerous complaints.

‘The police must be allowed to explore every aspect of these complaints to ensure they get to the bottom of this increasingly murky situation.’

Since 2017, the SNP has used fundraising websites to raise more than £660,000 to be used for the specific purpose of a referendum campaign. 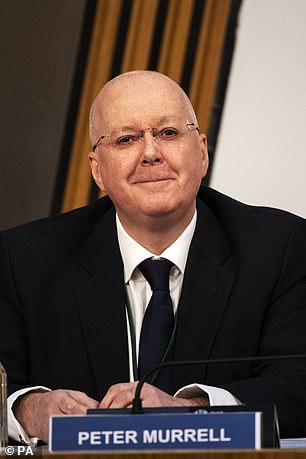 That led to some independence supporters contacting police, accusing the party of behaving fraudulently.

Nicola Sturgeon has previously denied any money has gone missing, saying the party’s finances have been independently audited.

Two SNP MPs quit the ruling National Executive Committee (NEC) in May, citing a lack of transparency from the party.

At that point, Police Scotland said it was assessing a fraud allegation relating to £600,000 of funds ‘to determine if an investigation is required’.

Yesterday a spokesman said: ‘Police Scotland has now received seven complaints in relation to donations that were made to the Scottish National Party.

‘After assessment and consultation with the Crown Office and Procurator Fiscal Service, we will now carry out an investigation.

‘Inquiries are continuing and anyone who has any information which may assist with this investigation is asked to contact police.’

The force has not stated exactly which donations the investigation relates to.

In May, MPs Douglas Chapman and Joanna Cherry resigned from the NEC.

Mr Chapman had been the party’s national treasurer and said he had not been given enough information to do his job.

On Twitter, he said: ‘Despite having a resounding mandate from members to introduce more transparency into the party’s finances, I have not received the support or financial information to carry out the fiduciary duties of National Treasurer.

‘Regretfully, I have resigned with immediate effect.’

The SNP’s business convener Kirsten Oswald said she ‘fundamentally disagreed’ with this description.

Last night Scottish Labour deputy leader Jackie Baillie said: ‘I very much welcome the news that Police Scotland has launched an investigation into the claims of impropriety regarding donations to the SNP.

‘For many months the SNP has been embroiled in internal fighting and recriminations over this most serious of matters.

‘The truth must be known, and Police Scotland must be allowed to carry out a thorough and detailed investigation.’

In June, the First Minister told STV News: ‘I’m not concerned about the party’s finances.

‘The finances of the SNP are independently audited, our accounts are sent to the Electoral Commission in common with other parties and of course published, so there’s full scrutiny around that.

‘We don’t hold separate accounts, we’re under no legal requirement to do that, our accounts are managed on a cash-flow basis.

Last night an SNP spokesman said: ‘We will co-operate fully with any investigation.

Mr Chapman’s resignation came after three members of the SNP’s finance and audit committee stood down, claiming they had been denied access to the accounts.

Mr Chapman’s replacement as treasurer, Colin Beattie MSP, has insisted ‘amounts equivalent to the sums raised’ will be spent on campaigning in future.

It emerged last month that the SNP had returned a donation to its independence fund after the man who gifted the cash threatened to go to the police alleging fraud.

Mr Murrell sent a personal message to a disgruntled former member who questioned how the £600,000 independence fund was used.

The party said at the time that other donations had also been refunded, but these related to a ‘tiny number’ of former members.

The independence supporter wrote to the party: ‘I asked you to return my monies paid into the ‘ring-fenced’ Independence Fund.

‘I have failed to receive a response. Please note that if you fail to respond within the next seven days or return monies paid, I will report you to the police for theft/ fraud.’

Mr Murrell himself then emailed in response: ‘The National Treasurer has approved your refund and the bank transfer of £40 will be processed today. Kind regards, Peter.’

Yesterday activist Sean Clerkin, who made the initial police complaint, said: ‘I’m very pleased the police have proceeded to a full criminal investigation so that all facts can be investigated and appropriate taken when the investigation is completed.’

Alba Party General Secretary Chris McEleny, who defected from the SNP in March, said he first raised concerns about the party’s campaign funds in June 2019.

A former member of the SNP’s ruling body, he said his life was then ‘made a living hell by SNP HQ staff members’.

Yesterday he said: ‘As this is now a formal police investigation it will be inappropriate for me to provide public comment; however like any responsible citizen I will answer any questions Police Scotland put to me on the matter.’