Saturday Night Live staff writers are boycotting this weekend’s show over the decision to have Dave Chappelle host it, according to reports.

The news about the 49-year-old comedian was confirmed during last week’s episode of the long-running sketch show, which was hosted by Amy Schumer.

But some staff writers at New York City’s 30 Rockefeller Plaza are said to be furious that the showrunners have chosen the controversial Chappelle to host due to his history of making transphobic and homophobic jokes.

The SNL writers are so angry, they are boycotting the episode, an insider has told Page Six. The show’s actors will not be taking a stand, the insider noted.

Saturday Night Live staff writers are boycotting this weekend’s show over the decision to have Dave Chappelle (pictured in his ‘The Closer’ Netflix special) host it, according to reports

‘They’re not going to do the show,’ the unnamed insider was quoted as saying by the news site. ‘But none of the actors are boycotting.’

However, a representative for Chappelle said there had been no signs of a boycott when they had attended meetings with the writers during the week. 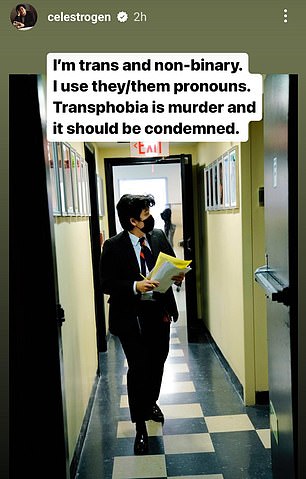 After Saturday’s announcement that Chappelle would be hosting, non-binary SNL writer Celeste Yim posted this to their Instagram stories

Chapelle was at 30 Rock on Tuesday where he met with both writers and producers to hear ideas. The comedian’s rep told Page Six:  ‘The room was full of writers.

‘They all pitched ideas and they seemed very excited about it…. Dave is looking to have some fun,’ they added.

After last Saturday’s announcement that Chappelle would be hosting, non-binary SNL writer Celeste Yim posted a picture of themselves in what appeared to be the writer’s offices to their Instagram Stories.

Over the picture, they wrote: ‘I’m trans and non-binary. I use they/them pronouns. Transphobia is murder and it should be condemned.’

While Yim did not directly reference Chappelle, the timing suggested their post was criticism of Chappelle being chose as host.

It is unclear whether Yim is one of the writers boycotting this weekend’s show.

DailyMail.com has contacted NBC about the reports of a boycott for comment.

It has also been pointed out by observers that the forthcoming instalment of the show will air just after the midterm elections in the United States.

Variety reported that the comedian’s appearance on the show would mark the third time that he would host the program following an election.

Chappelle is also set to be joined by rap duo Black Star, who will serve as the evening’s musical guests.

He last hosted the show well before the release on Chappelle’s Netflix special ‘The Close’, which angered some viewers because some of the jokes were aimed at the trans community.

In The Closer, Chappelle is at pains to stress that he does not hate transgender people, and tells a long anecdote about a trans woman comic, who he describes as a friend, who came to his defense in earlier entanglements with the community.

He was criticised for intentionally misgendering the trans friend. 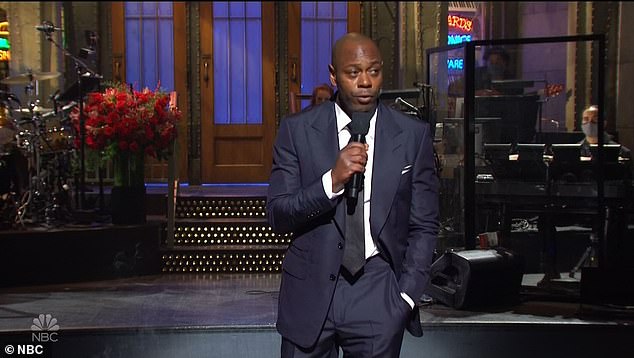 Not his first rodeo: Variety reported that the comedian’s appearance on the show would mark the third time that he would host the program following an election

The star also jokes about the anatomy of transwomen in the special, joking that they lacked real female reproductive organs and that they did not have blood but ‘beet juice.’

The performer’s debut as the series’ host took place in November of 2016, just after former president Donald Trump was elected into office.

During his appearance, the actor spoke via USA Today about the implications of the former television personality’s then-new position as the head of the country.

‘America’s done it — we’ve actually elected an Internet troll as our president,’ he stated.

However, Chappelle unexpectedly ended his opening monologue on a positive note.

He stated: ‘I’m wishing Donald Trump luck, and I’m going to give him a chance, and we, the historically disenfranchised, demand that he give us one too.’

The performer went on to receive the Emmy Award for Outstanding Guest Actor in a Comedy Series for his work on the program.

The comedian subsequently returned to the show in 2020, during a episode that also followed that year’s presidential election.

At the time, the vote counts were delayed as a result of the COVID-19 pandemic and had only been confirmed on the day of the show’s taping.

During the episode, Chappelle expressed via Vox that the United States had become deeply divided and that the value of reconciliation was more important than many would expect.