LEG-go of me! Snake winds itself round heron’s legs in desperate bid to avoid being eaten – before losing its hour-long battle with the bird

This is the moment a desperate snake wrapped itself around the legs of a heron to try to avoid becoming the bird’s dinner.

Michelle Siefken, 55, was watching wildlife around Lake Hollingsworth, Florida, when she came across the great blue heron on the lookout for a snack.

Her gripping footage shows a Florida banded water snake fighting to remove its head from inside the hungry bird’s beak and throat.

Literally clinging on for dear life, the snake wraps itself round both of the heron’s legs, forcing the predator to loosen its grip around its neck.

Michelle Siefken, 55, was watching wildlife around Lake Hollingsworth, Florida, on January 28 when she came across a great blue heron on the lookout for a snack 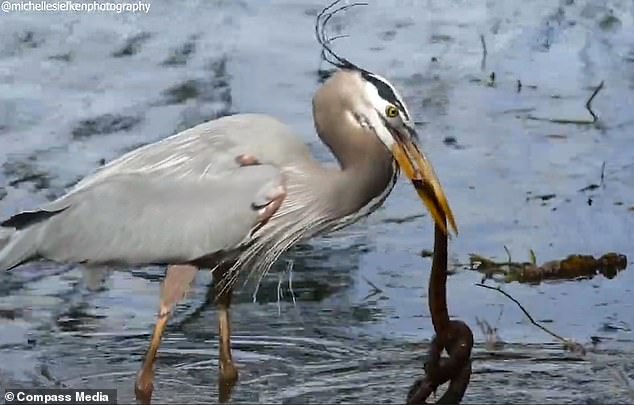 In another manoeuvre, the snake ties its own body into a giant knot to avoid being swallowed, but the heron’s persistence proved the whole defence to be futile.

Michelle said: ‘It was fascinating to watch the snake attempt to escape the great blue heron’s grip, first while its head was already in the heron’s throat and later when the heron’s bill was squeezing its neck and head.

‘The struggle started before I arrived and probably lasted at least an hour.

‘Initially, when the snake’s head was in the heron’s throat it managed to wrap its tail around first one and then the other leg, pulling its own head and upper body out of the bird’s throat.

‘Off-balance and unable to fly or walk steadily, the heron was forced to drop its prey briefly. Unfortunately for the snake, its body was still tangled around the heron’s leg making it impossible to escape.

‘When the heron was finally able to loosen the hold by stepping out of the entanglement, the snake fought yet again by knotting its body underwater, making it impossible to be swallowed. 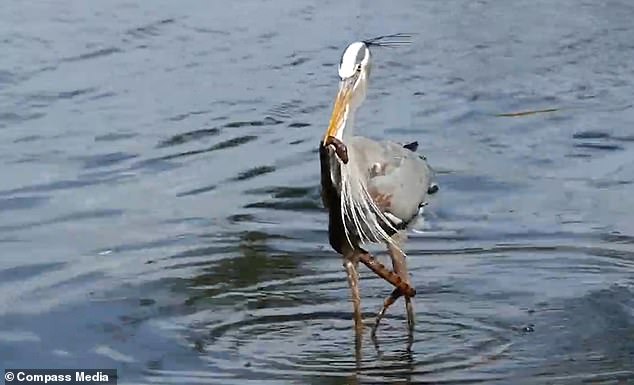 Literally clinging on for life, the snake wraps its body around both of the heron’s legs, forcing the predator to relinquish its grip around its neck 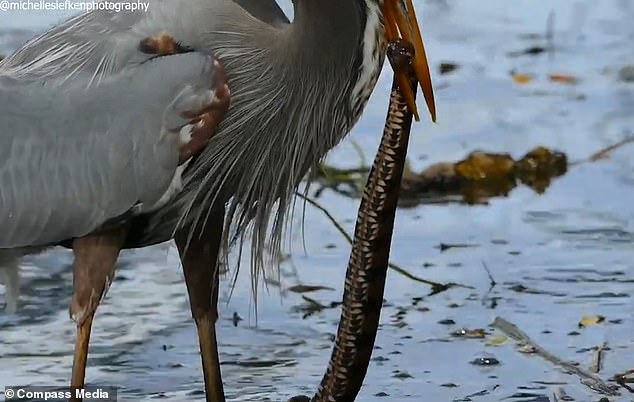 In another brave manoeuvre, the snake ties its own body into a giant knot to avoid being swallowed, but the heron’s persistence proved the whole defence to be futile

‘Unfortunately for the snake, the heron’s patience, sheer determination and unyielding grip on its head appears to have suffocated this worthy adversary in the end.

‘I have never seen anything like this while taking wildlife videos, before or since. It was gripping to watch.

‘I was fascinated by both warriors and wanted to see what would happen next. Most of all it was incredible to watch the snake’s struggle to survive and the heron’s unwavering patience.’ 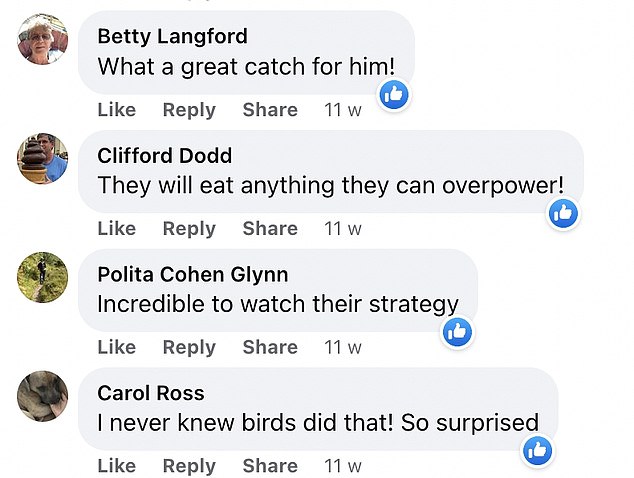 She posted the gripping footage to Facebook group Birding in Florida with the caption: ‘Great blue heron wrangling a brown water snake gives new meaning to “I’m all tied up at the moment!” (and yes, he finally downed the whole snake) Lake Hollingsworth, Lakeland (1/28/22).’

And the footage left many social media users stunned. One wrote: ‘Incredible to watch their strategy.’

Another said: ‘They will eat anything they can overpower!’

While a third wrote: ‘I never knew birds did that! So surprised.’