Bowleven PLC, the Africa-focused oil and gas company, was this week’s best performer after it revealed it has a new partner on its Etinde permit, located offshore Cameroon.

The company has been informed by New Age (African Global Energy) Limited, the operator of the Etinde joint venture (JV), that New Age has signed a definitive conditional agreement with a subsidiary of Perenco SA to transfer all of New Age’s participating interests in the Etinde permit, and operatorship of the Etinde JV, to Perenco.

Bowleven will continue to be entitled to a final investment decision payment of US$25million from its Etinde JV partners which, following completion of the transaction, would include Perenco.

The news sent the company’s shares 80 per cent higher.

Bowleven, the Africa-focused oil and gas company, was this week’s best performer after it revealed it has a new partner on its Etinde permit, located offshore Cameroon

IG Design Group PLC, up 42 per cent, enjoyed a relief rally after it extended the term of its existing banking agreement to 31 March 2024.

‘Our seasonal order book remains strong and this revised facility provides us with sufficient funding for our working capital requirements,’ said Stewart Gilliland, the chair of the stationery and paper bag company.

The annual general meeting of Parity Group PLC, the recruitment group, was probably a happy one after the company issued an upbeat statement.

The company said that as a result of cost reductions implemented in 2021, it has had scope to make investments in building capability in areas where the market is stronger and where it can deliver on new business opportunities in the second half of the year.

Caspian Sunrise PLC is apparently not as Russian as you might think, which cheered the market considerably.

The shares climbed 28 per cent to 5.05p – back to pre-invasion levels – as the company emphasised its oil ‘is Kazakh oil, not Russian oil.’

‘To date there we have had no problems in accessing the Russian pipeline network to deliver our international oil and we do not believe there will be any issues in this respect no matter how long sanctions continue. Whatever happens, we do not see these pipelines being closed,’ it added.

The revenue for the initial three-year cloud subscription period is US$19million and is expected to generate similar margins to Netcall’s overall group margin, providing a significant contribution to the group’s revenue and profit. 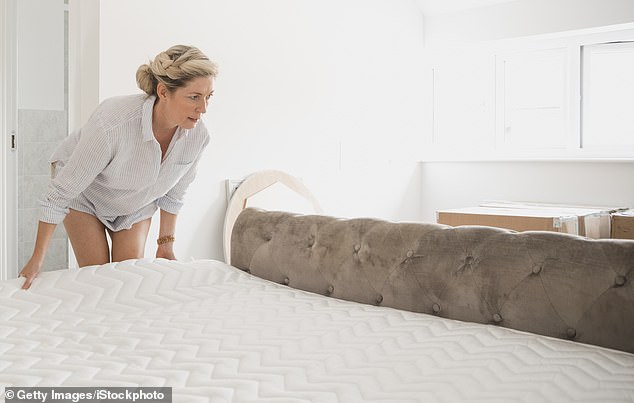 Share decline: Taking a tumble this week was Eve Sleep, a humble mattress manufacturer that tried to pass itself off as some kind of sleep science company

The shares rose 22 per cent this week.

Renalytix PLC shot up 23 per cent this week after it announced that its KidneyIntelX bio-prognostic testing system successfully risk-stratified adult patients with type 2 diabetes and early-stage chronic kidney disease (stages 1 through 3) for key clinical outcomes, including heart failure hospitalisations and death.

‘These results show the potential of KidneyIntelX to enrich clinical trials for patients at higher risk of these complex conditions, which could improve trial efficiency for pharmaceutical companies,’ said Steven Coca, the co-founder of Renalytix.

It’s safe to say the result of the drilling of Clontarf Energy PLC’s Sasanof-1 exploration well in Western Australia was a big disappointment.

No commercial hydrocarbons were intersected and the well was plugged and permanently abandoned.

Investors promptly abandoned the shares and the oil exploration company lost around three-quarters of its value.

Also taking a tumble was Eve Sleep PLC, a humble mattress manufacturer that tried to pass itself off as some kind of sleep science company (it even had the trendy but annoyingly pointless all lower-case first word in the company name).

The company put itself up for sale as it believes it needs additional investment to accelerate its push into ‘the wider sleep wellness space’.

Floated in May 2017 at 101p, when it was valued at £140million, the shares slumped 39 per cent this week to a penny and a market capitalisation of just £3million.

ADVFN PLC, the financial information provider, has been the subject of a power struggle in recent years and the market was probably wondering why this week as the shares lost a third of their value following a trading update.

Sales this year have been disappointing, the company said, with the run rate broadly flat, sales below the preceding six-month period and down year-on-year.

In particular, advertising sales have been disappointing reflecting among other things a softer market for financial media, the company said.

Full marks, at least, for not sugar-coating the bad news or leading with some inconsequential smidgen of positive news and then burying the bad news in paragraph 12, although it did wait until the fifth paragraph to drop the bomb about suspended dividend payments.