After several days of stock market turmoil sparked by the government’s mini-budget, London’s junior market capped off the week and the month with a small bounce and frenzy of results releases.

A 0.4 per cent rise on Friday meant the AIM All-Share index dropped 3.9 per cent for the week as a whole, compared to a 1.7 per cent decline for the internationally flavoured FTSE 100 and a 5.6 per cent fall for the mid-caps of the FTSE 250.

Even in the smoking rubble of the market, there were a number of small cap success stories that still shone through, including Attraqt, which jumped after receiving a cash takeover bid at a premium of around 71.43 per cent to the previous day’s closing share price.

Bright spot: Amidst stock market turmoil, London’s junior AIM market capped off the week and the month with a small bounce and frenzy of results releases

Among those sticking around on the market, Eden Research stood out among the 80-plus companies releasing results at quarter’s end on Friday and 100-plus in preceding days by saying it is on track to meet its sales guidance for the year after reporting a 32 per cent jump in first-half revenue.

Helping lift shares up 29 per cent over the week, the sustainable biopesticides group said it cut losses in the first half and entered the second with on an even stronger footing after the US approval of the company’s products.

This, said chairman Lykele van der Broek, ‘opens up significant revenue and growth opportunities for us, with our total addressable market in the region of US$500million.’

7Digital also hit the right notes with its results on Wednesday too, with shares in the digital music specialist bopping 27 per cent higher after it reported a 21 per cent rise in half year revenues and broke even on an underlying level.

The company, which last week unveiled a £500,000 fundraising with a loan from shareholder Magic Investments, said it had secured five new licensing customers, three contract expansions or extensions and was entering the second half with a ‘solid new business pipeline’.

Back home in the UK, Billington shares built up a good rise after the structural steel firm predicted better than expected results for this year and next.

With revenues for the first six months of the year up 22.4 per cent to £46.2million and profits almost doubling to £1.5million, the Barnsley-based group said it had secured a significant amount of new work since the end of the half.

In particular, it said it had won contracts in the data centre, energy-from-waste and industrial warehousing sectors at improved margins.

Chief executive Mark Smith said: ‘Whilst macroeconomic headwinds are likely to remain for some time, particularly with regard to material availability, price volatility and continuing inflationary pressures, we are seeing a consistent stream of opportunities at better margins.’

There were some winners at the lower reaches of the mining sector, with tiny explorer Tertiary Minerals shooting up 56 per cent after two Zambia updates, where it said tribal and stakeholder engagement was ‘successfully completed’ and it has now earned a 90 per cent joint venture interest from local company Mwashia Resources.

The company said it is beginning soil sampling at its Jacks copper prospect, following drilling this summer, and has hired an experienced exploration manager in the country. 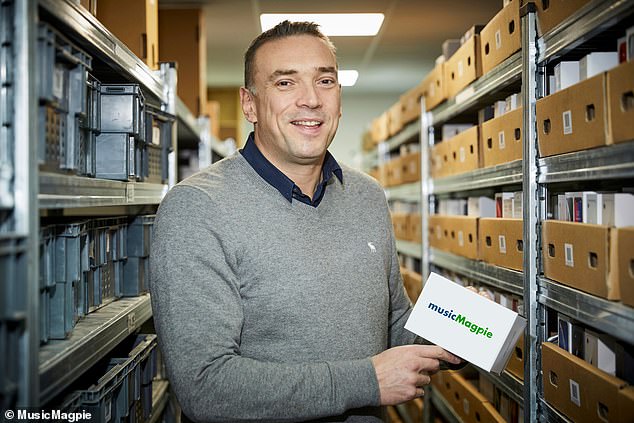 MusicMagpie, co-founded by Steve Oliver (pictured), lost over half its value over the week after its worries over the UK economic outlook led it to cut its profit target

Focused across its border on Mozambique, Pathfinder Minerals shares jumped 29 per cent after announcing that it has entered into an option agreement with a US firm that specialises in international asset recovery to bring a claim against the government of the southern African government for expropriating a mining licence.

If the agreement is approved, Delaware-based Acumen Advisory Group will pay £2million cash to Pathfinder to acquire 100 per cent of its IM Minerals subsidiary and the rights to the claim, with legal proceedings to be launched within three months with the aim of reaching conclusion within five years and sharing the proceeds from the legal claim.

Pathfinder said doing the deal would mean it is transformed into a cash shell, but could also eventually also benefit from potential upside from the claim that has been ‘independently evaluated to be worth in a range of US$110million to US$1.5billion.’

But fallers dominated the week, many of which were warning on profits alongside the release of half-year results, as the economic outlook darkened.

MusicMagpie lost over half its value over the week after its worries over the UK economic outlook led it to cut its profit target.

Even though the aim of the company is to help people drum up a few pounds from selling their second-hand DVDs, CDs and electronic goods, the company expects sales and profit growth will be weaker than previously hoped.

‘Whilst the group continues to expect that Black Friday will prove to be a peak trading period, it now believes it is prudent to reduce its expectations for contribution from this period due to the worsening economic outlook and increasing cost of living pressures on the UK consumer,’ it said.

Results from Fire Angel Safety Technology were also a damp squib as the supplier of home safety products warned that while revenues rose in the first half and are expected to come in strong for the year, the impact of the rising cost of components and the weaker pound means underlying profits will be ‘materially below’ what the market had pencilled in.

Pressure Technologies slumped after saying it would make a full year loss and was in talks with its bank as a recovery foreseen in the second half has not materialised.

This, the engineer said, would result in it not being able to meet the requirements of its banking terms.

Directors are in ‘constructive dialogue’ with Lloyds Bank about this, while also working with advisers on alternative funding options to replace the bank facility and potentially allow it to win some of the ‘significant’ hydrogen projects in its pipeline.

The biggest fall was at data software group Glantus which fell 68 per cent over the week as it warned on profits due to delays and higher costs from its relocation to Costa Rica.