Small businesses in the South West are most hampered by poor broadband, Mastercard says as it ramps up digital help for fledgling firms

Small businesses in the South West of England are being hampered by poor broadband performance, a new report has claimed.

The East Midlands, West Midlands and the South East of England achieved the highest scores for broadband performance, while the South West, Yorkshire & the Humber and the North East came in at the bottom of the pile.

The effective use of technology across different small business operations varies widely, with just over 32 per cent saying its use for human resources and recruitment matters was ‘good or very good’ at their company.

Slowdown: Small businesses in the South West of England are being hampered by poor broadband performance, a new report has claimed 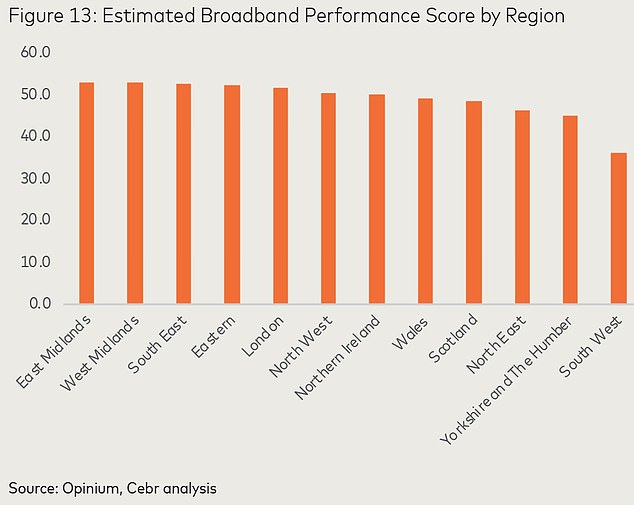 Variable: A new report has highlighted the importance of fast broadband for small businesses

At the better end of the spectrum, nearly 70 per cent of small businesses said their use of technology for accounting and finance matters was better than most.

Small businesses, according to the data, comprise around 36 per cent of turnover in the private sector and make up 48 per cent of the country’s labour force.

Recent figures from Goldman Sachs suggest that nearly two-thirds of small businesses suffered a fall in revenue in 2020, with 44 per cent cutting jobs.

But, over the next five years, small businesses hope to boost their combined revenue by up to £827billion, and the use of technology is expected to be at the heart of this mission. By 2026, turnover stemming from small businesses is predicted to reach £1.9trillion.

According to the report, over 40 per cent of small businesses said they would not have stayed afloat during the pandemic without ‘digital tools.’

A further 47 per cent think technology will become more important to their company’s success over the next five years, while 45 per cent said it had already helped them bolster their customer base. A third said technology had helped them increase their profits.

However, the use of technology can be something of a minefield for many small business owners, and nearly 40 per cent admitted they felt overwhelmed by the number of different options available.

Kelly Devine, president of Mastercard for the UK and Ireland, said: ‘Small businesses are the beating heart of the British economy.

‘The past 18 months have proved almost unendurably tough for many, and data shows that small businesses are in urgent need of support if they are to survive and grow post-pandemic.

Sam Miley. an economist at the Cebr, said: ‘The data highlights the scale of small businesses’ growth aspirations. Realistically, many businesses may fall beneath these expectations as a result of a number of factors, such as weaker productivity or a slump in economy-wide demand.’

Mastercard has launched a scheme called ‘Strive UK’ which has been designed to try and help around 650,000 of the country’s small businesses bolster their digital prowess via free guidance, tools and ‘personalised, one-to-one mentoring.’ 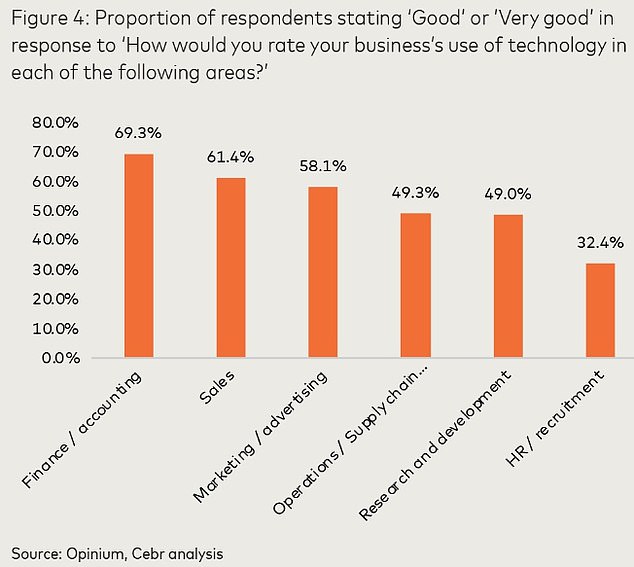 Tech trouble? The use of technology across different segments of small businesses

Small businesses interested in taking a look at what Mastercard’s Strive UK scheme has to offer can visit its online site to start developing a personalised plan for their company.

‘After grants and support schemes, help in accessing digital tools was the most frequently cited external source in helping to achieve this growth’, today’s report by Mastercard and the Cebr said.

The latest in-depth findings on small businesses also suggest that the North East of England falls short on a number of issues when it comes to the development of small businesses.

It said: ‘The North East lags behind on a number of measures, including minority worker representation and small business representation.’