Skins actress Kathryn Prescott is no longer in a life-threatening condition after she was hit by a cement truck in Brooklyn, her mother said Friday.

The 30-year-old Londoner was taken to hospital in a critical condition after the accident on Tuesday, her twin sister Megan revealed last night.

Kathryn broke both her legs, her left hand, a foot and has two breaks in her pelvis, her distraught sister said as she revealed she was trying to get an exemption to travel to New York to be at her bedside.

Today their mother Theresa said at the family’s home in north London that the Skins star’s condition had improved.

Martin Prescott, Kathryn’s father, said: ‘I’m sorry I’m not trying to be difficult but I don’t think it’s right we speak to you just now.

‘It’s all about Kat. I’m on the phone to my son and I’m trying to get him over there.

The 30-year-old Londoner was rushed to hospital on Tuesday following the horror crash, her twin sister Megan revealed on Instagram on Thursday 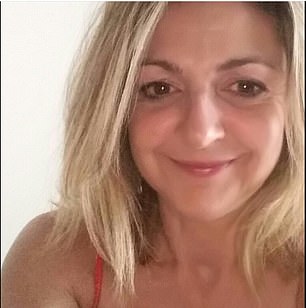 ‘I don’t want anything I say to you to compromise the situation.

The family lives in a three-floor family home in Palmers Green, North London.

The NYPD told Mail Online that the incident happened at around 17.25pm at the intersection of Bergen Avenue and Vanderbilt Avenue in Prospect Heights.

The concrete mixer truck being operated by a 55-year-old man was traveling on Bergen and attempting to make a right turn onto Vanderbilt Avenue when Prescott attempted to cross the street and was struck. 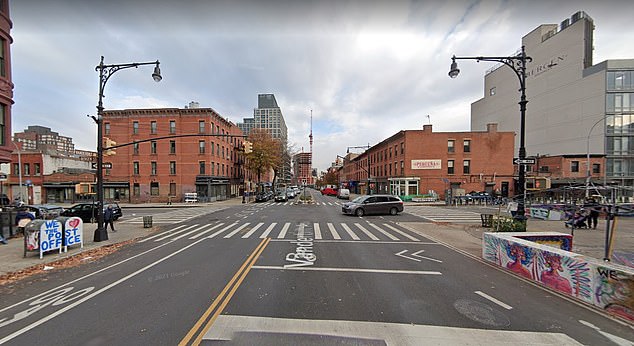 Prescott suffered injuries to both legs, both arms and a possible head injury, according to the NYPD. She was taken to hospital ‘conscious and alert.’

The driver of the concrete mixer truck was issued a summons for failing to yield to a pedestrian.

Prescott’s twin sister Megan revealed her agony at being blocked from entering the United States while her sister lays in hospital after the crash.

Megan, 30, has taken to social media in recent days confessing that she has been unable to get an exemption to be with her sister after applying for a National Interest Exemption.

Megan wrote: ‘I received the most terrifying phone call I’ve ever received in my life on Tuesday evening.

‘My twin sister Kathryn was hit by a cement truck while crossing a road in New York on the 7th September.’

She outlined the extent of her injuries, including a ‘broken pelvis in two places, both of her legs, her foot and her left hand’.

Megan pointed out that, although her sister would be taken care of by medical professionals, her mobility could have been severely affected long-term.

She was denied an exemption to travel from the UK to the US, which means the quickest she could possibly get to Kathryn would be if she traveled to a country with easier travel to the United States.

However, she would have to quarantine for 14 days if she did.

Mail Online sent a request for comment to the US Embassy in London. 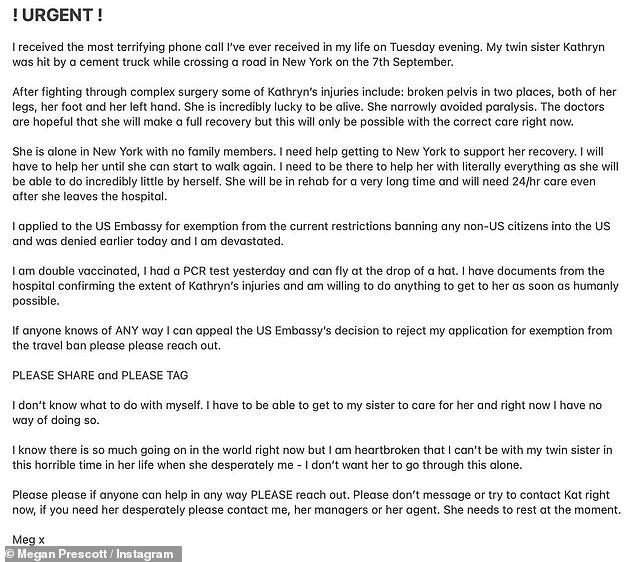 Megan pointed out that, although her sister would be taken care of by medical professionals, her mobility could have been severely affected long-term

She wrote Kathryn ‘narrowly avoided paralysis. The doctors are hopeful that she will make a full recovery but this will only be possible with the correct care right now.’

She also pointed out her sister is currently ‘alone in New York with no family members’.

‘I have documents from the hospital confirming the extent of Kathryn’s injuries and am willing to do anything to get to her as soon as humanly possible.’

She continued: ‘I don’t know what to do with myself. I have to be able to get to my sister to care for her and right now I have no way of doing so.’

She added: ‘I know there is so much going on in the world right now but I am heartbroken that I can’t be with my twin sister in this horrible time in her life when she desperately needs me – I don’t want her to go through this alone.’

Megan asked her followers to let Kathryn recover undisturbed and to direct all of their concerns to either her or to the actress’ representatives.

She said: ‘Please don’t message or try to contact Kat right now, if you need her desperately please contact me, her managers or her agent. She needs to rest at the moment.’

A Gofundme has been started to raise £2,000 to get their brother Ben a plane to Canada, where he can visit Kathryn after quarantining 14 days

She also shared a message to her Instagram Story where she pointed out she was ‘not interested in spending two weeks in another country to see my sister… I need to go NOW.’

Megan, who is based in Britain, went on to blast the US government’s policy towards foreign nationals after being told she could not see her sister.

She wrote: ‘I applied to the US Embassy for exemption from the current restrictions banning any non-US citizens into the US and was denied earlier today and I am devastated. 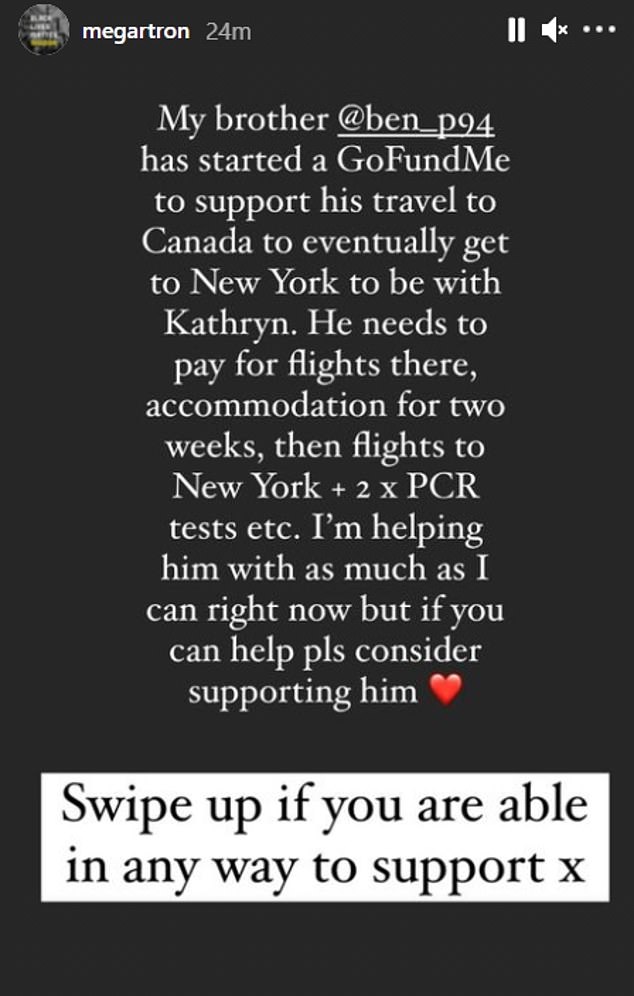 The girls’ brother, Ben, is going to attempt to get to the United States the long way.

A Gofundme has been started to raise £2,000 to get him a plane to Canada, where he can quarantine for the required two weeks and then fly to New York to be with Kathryn.

Prescott has been left in a critical condition after being hit by a cement truck while crossing a road in New York. 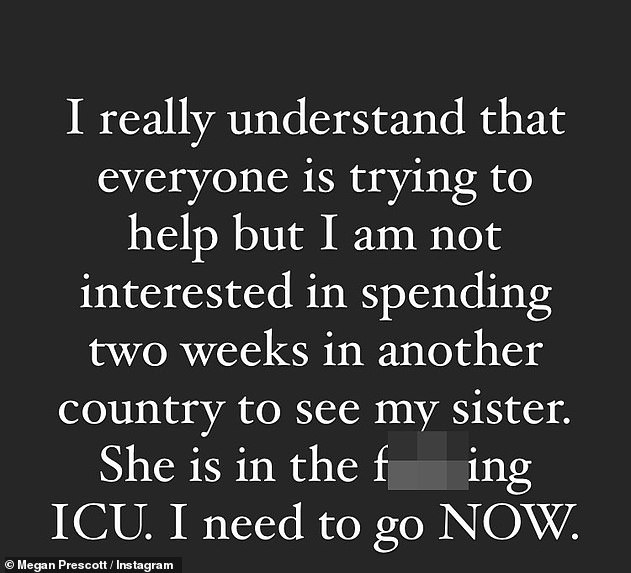 She got into acting in 2008 when the pair featured in an episode of soap opera Doctors. Pictured: Megan’s post on Instagram

The 30-year-old Londoner was rushed to hospital on Tuesday following the horror crash, her twin sister Megan revealed on Instagram on Thursday.

The actress, know for playing Emily Fitch in Skins and Carter Stevens in Finding Carter, is in an ICU at a New York Hospital and is ‘incredibly lucky to be alive’. 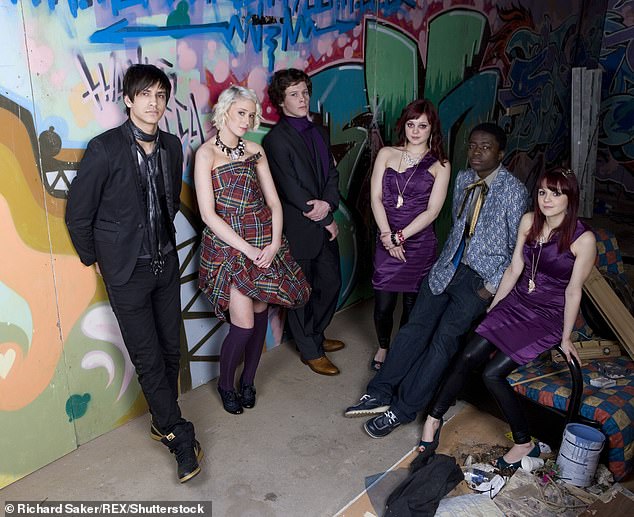 The twin sisters are pictured with the Skins cast, including Luke Pasqualino, in 2009 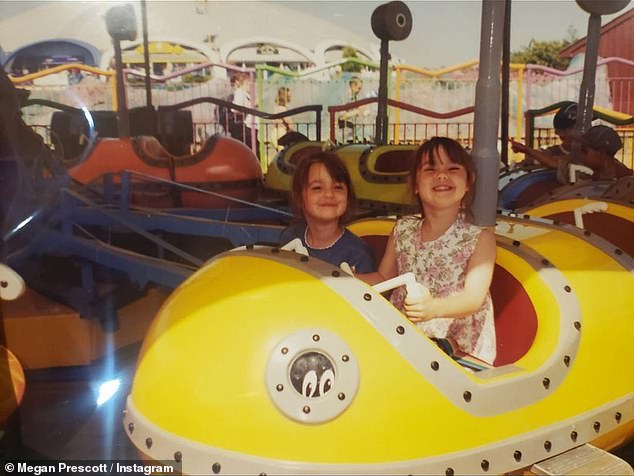 She wrote Kathryn ‘narrowly avoided paralysis. The doctors are hopeful that she will make a full recovery but this will only be possible with the correct care right now.’ Pictured: The twins as children 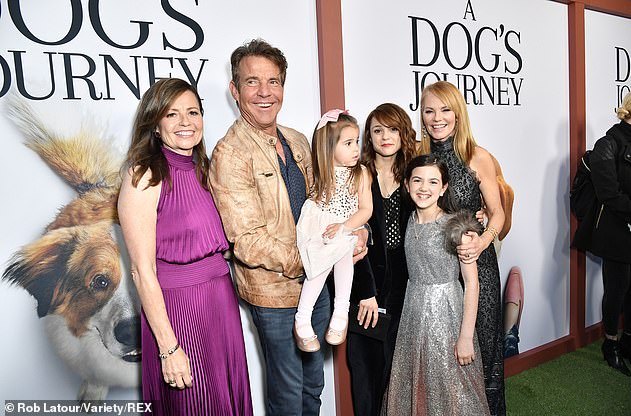 What films and TV shows have Kathryn Prescott been in?

Megan, a bodybuilder, announced the shock news through her social media on Thursday and said her twin had a broken pelvis, legs, foot and hand.

Kathryn was born in Palmers Green, north London, and is six minutes older than twin Megan.

She got into acting in 2008 when the pair featured in an episode of soap opera Doctors.

Kathryn joined the Skins cast a year later when she took on the role of Emily Fitch through series three, four and seven.

She revealed on her website during a q&a with fans that she does not assign a sexuality to herself.

She said she ‘does not think people are defined by their sexuality’, saying ‘it doesn’t change who you are as a person’.

Megan said she wanted to serve as a caregiver for her sister, who will require further treatment following her release from the medical facility.

She added: ‘I need to be there to help her with literally everything as she will be able to do incredibly little by herself.

‘She will be in rehab for a very long time and will need 24/hr care even after she leaves the hospital.’

Megan soared to fame in 2009 on Skins as her character Katie Fitch and – after leaving the show in 2010 – she went on to appear on Silent Witness and Holby City.

In 2016, Megan pursued a bodybuilding career and documented her fitness transformation in a documentary called  Megan Prescott: Dumbbells And Donuts.

The actress spent months working out for the UK Bodybuilding and Fitness Federation Bikini-Fitness event in May 2016. 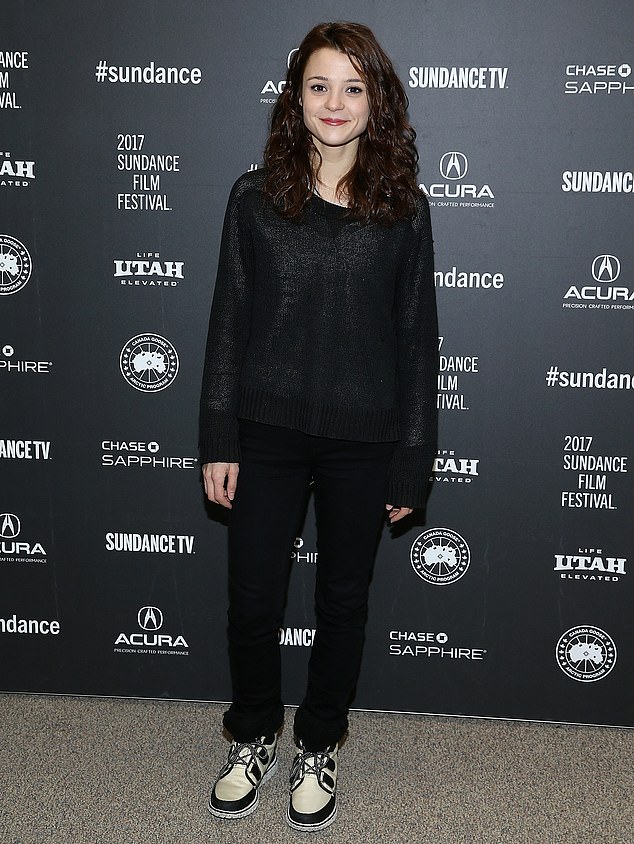 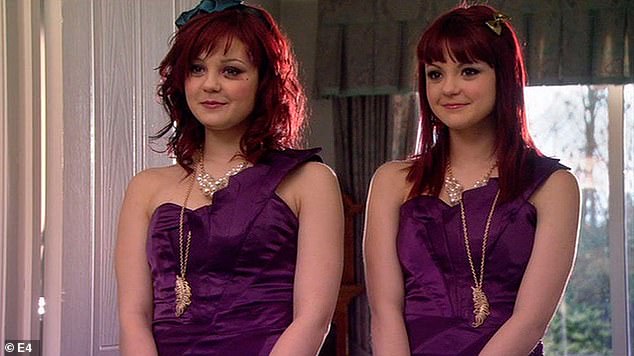 Megan soared to fame in 2009 on Skins as her character Katie Fitch (pictured) and after leaving the show in 2010, the actress went on to appear on Silent Witness and Holby City 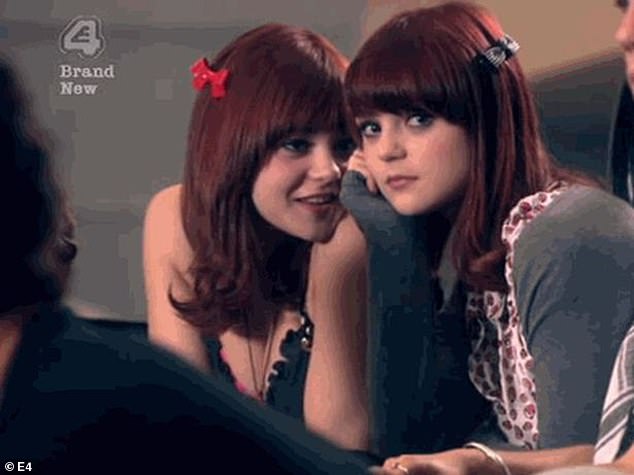 Megan and twin Kathryn appeared on Skins as Katie and Emily Fitch, with Megan leaving the show in 2010 (pictured) 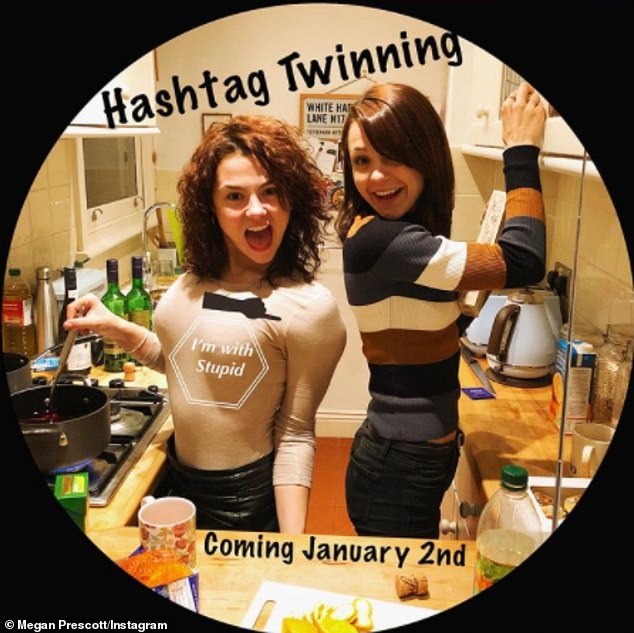 Kathryn, who played Emily Fitch on the E4 series, has appeared in Netflix film To The Bone – alongside Lily Collins and Keanu Reeves (the sisters are pictured 2019)

Megan previously said: ‘I’m super into my fitness. I’ve been training in the gym for a few years now, weight training for the last couple.

‘And now I’m really excited to take it to the next level. The idea to compete really came to me a few months after I started weight training.

‘I started realising how much better I felt mentally and physically. Something that started as a ‘bucket list’ idea started to be a general lifestyle for me. You feel better mentally, physically, you feel stronger.’