On Nov. 30, 2017, Gagnon lost her edge making a turn and crashed into the netting during downhill training in Lake Louise, Alta., suffering a torn anterior cruciate ligament in her right knee and dislocated left shoulder.

The native of Lac-Etchemin, Que., missed the 2018 Olympics and didn’t feel entirely comfortable skiing fast for 14 months after her injury until a World Cup stop in Crans-Montana, Switzerland in February 2019.

“The mental [hurdle] of coming back into the speed discipline was a lot harder than I thought it would be,” Gagnon said ahead of Saturday’s season-opening World Cup event in Soelden, Austria, where she will compete in giant slalom. “Consciously, I was feeling good but subconsciously my body was like, no, you’re not doing this.”

Gagnon, 31, felt she turned a corner with a career-best 13th-place finish in Bansko, Bulgaria, at a World Cup downhill on Jan. 24, 2020. Though the “difficult, steep and technical” hill suited Gagnon and her giant slalom background better than others, she wasn’t completely satisfied.

“My goal is to be a lot better than 20th, 30th or 13th,” she stressed. “You sometimes see skiers, especially on the men’s side, start winning the [downhill and giant slalom] at 30 years old. It’s a patience game with the speed events because you need mileage on the hill and experience.” 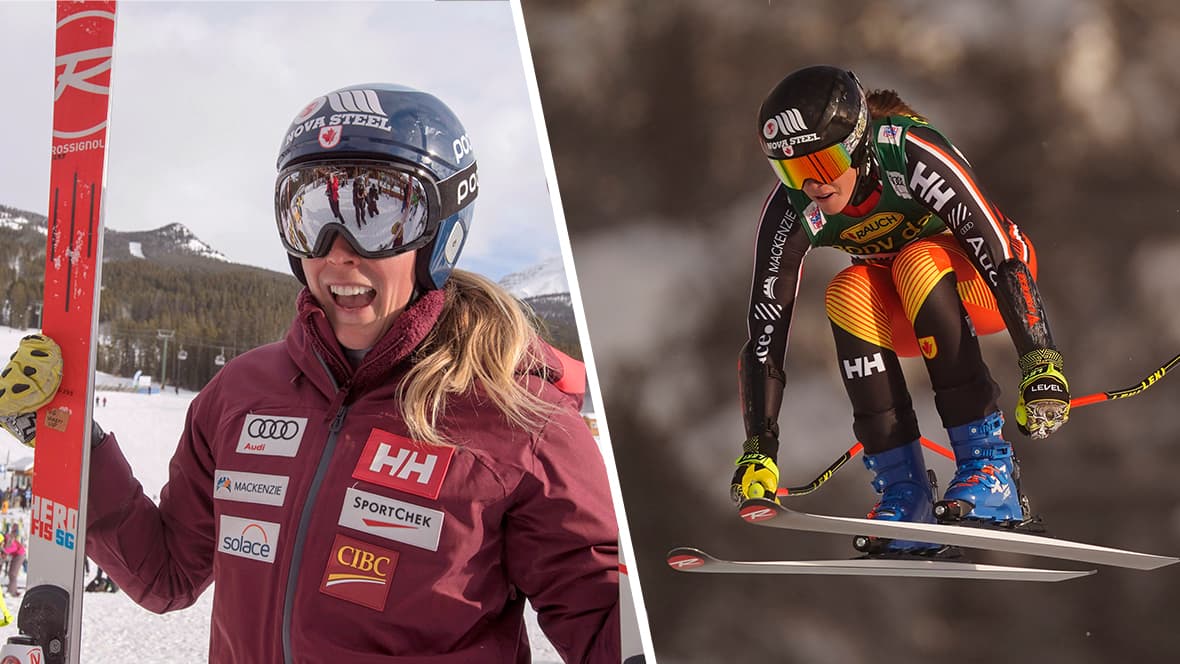 World cup and Olympic alpine ski racer Marie-Michèle Gagnon has anxiously awaited her return to the hill after COVID-19 halted the 2020 season. 3:06

Toronto’s Candace Crawford and Val Grenier of St. Isidore, Ont., are also racing at the Soelden event, which was moved forward a week to avoid tourist crowds at the Austrian resort. Grenier returns after breaking her right tibia (shinbone) and fibula (calf bone) and right ankle during a downhill training run in Are, Sweden in February 2019. She finished a career-best 11th in the GS at Soelden in 2018.

Toronto’s Trevor Philp and Calgary’s Erik Read, who placed a career-high seventh a year ago in Soelden, are scheduled to race in the men’s giant slalom on Sunday.

Competing in downhill at the 2022 Winter Games in Beijing is an Olympic dream for Gagnon, whose boyfriend Travis Ganong is a member of the U.S. national Alpine team.

In her 2010 Olympic debut, she finished 21st and 31st, respectively, in the giant slalom and slalom in Vancouver. Gagnon dislocated her left shoulder four years later after straddling a gate during the slalom run of the Alpine combined — her first event in Sochi, Russia — but managed to race three more times and place ninth in slalom.

Gagnon’s pain threshold was on display again in February of this year when she grazed the bottom of a downhill gate and broke a bone in her right hand in the second downhill race in Crans-Montana because the gloves she was wearing for aerodynamic reasons offered little protection. Gagnon managed to tape her ski pole to the hand the next day, figured how to go in and out of her tuck and placed 15th in the combined — a downhill and slalom combo event — after not racing the latter all season.

Six days later, an ailing Gagnon raced a super-G — a hybrid of downhill and giant slalom testing a skier’s speed and technique — before calling it a campaign in which she ranked 27th in the world in combined, 30th in downhill and 37th in super-G.

“I knew I wasn’t my best [in Italy] and … when you take 10 to 20 per cent away from your physical strength there’s almost no chance of performing [well],” said Gagnon, who had 12 top-30 finishes last season.

This season, with no North American stops on the tour to reduce travel amid the coronavirus pandemic, Gagnon said she will probably remain in Europe until March after arriving in Switzerland in mid-August to resume ski-race training.

I want to ski to my potential which I haven’t for a few seasons. … I think top-10s are in the cards.— Canadian alpine racer Marie-Michele Gagnon

The four-time World Cup medallist is planning to race all the super-G and downhill events, so at least six of the 14 World Cup stops before the Feb. 8-21 world championships in Cortina d’Ampezzo, Italy. Gagnon is also hopeful of competing in a much-delayed Olympic test event due to COVID-19 on Feb. 27-28 in the Yanqing district of China.

The first speed races are Dec. 5-6 in St. Moritz, Switzerland.

“Being consistent is what I strive for,” said Gagnon, who has yet to win an Olympic or world championship medal. “I want to ski to my potential which I haven’t in a few seasons. My goal is to have strong results on the speed side and be a [podium] contender on the weekends of races.

“I think top-10s are in the cards but I have high expectations. I would like to be ranked in the top 15 in both downhill and giant slalom.”

While many people associate Gagnon with the downhill, she feels super-G is her best event, despite several poor outcomes last season.

“I was missing consistently [in that discipline] because I would go super-fast in two or three sections [of a race] and then make one big mistake or go out,” said Gagnon, who launched her own ski fitness website in 2017.

“I had a lot of DNFs [did not finish] so my [ranking] in super-G was not good despite having a lot of good sections and doing well in training.

“It didn’t show my potential so I’m excited to find a little more consistency this season. And I’m on Head skis now and have renewed energy and excitement.”