A woman, who is a UK size 10, was ‘mortified’ when doctors told her to lose two and half stone because she was ‘obese’.

Regan Ellis, from Milton Keynes, took to her TikTok @reganellisx to share the shocking story which astonished her followers.

The aesthetics practitioner, who is 5ft 7 and weighed 11st 12Ibs at the time of the comments, explained that she’d gone to see her doctor for blood test results when he made the remark on her weight.

Regan’ had a BMI of 26, according to her height and weight, meaning she would be classed as ‘overweight’ but not ‘obese.’ 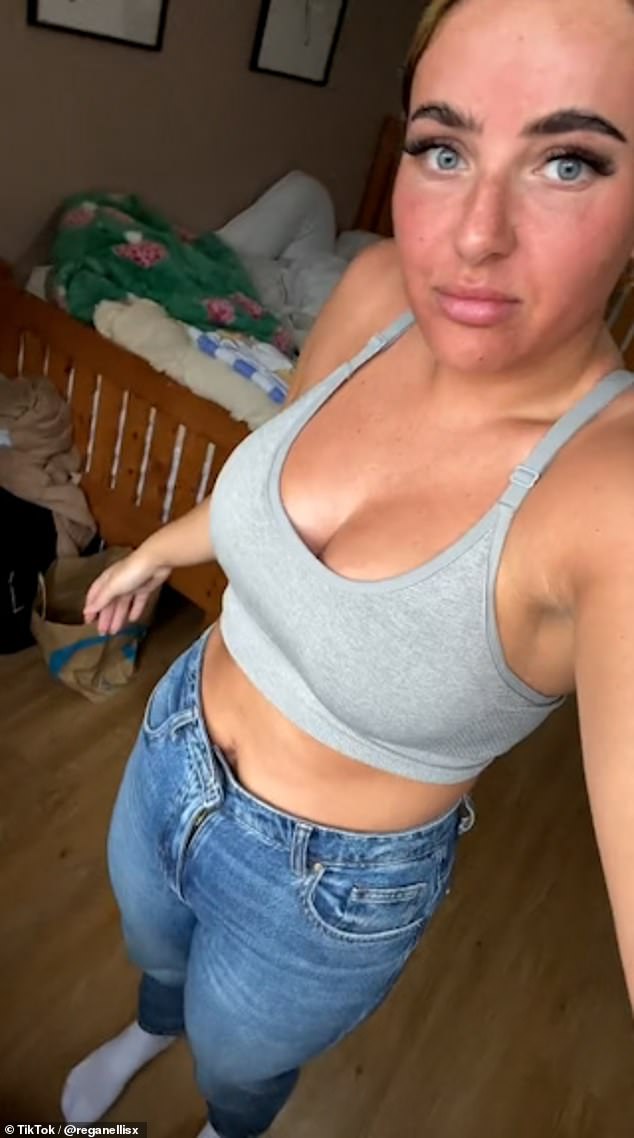 Regan Ellis, from Milton Keynes,  has since lost 10lbs after being prescribed weight-loss medication

‘And I need to set the scene for you guys because it’s actually a f***ing monstrosity, it’s not good.

‘So I went to the doctors a couple of months ago, about June/July time and I was weighing about 11st 12lbs.

‘A bit bigger than what I usually am but it is what it is and I feel like every girl around this age – between 20 and 25 – we put on a bit of weight, it is what it is. It’s relationship weight. Well, it’s Wagamama’s weight if I am completely honest with you.’ 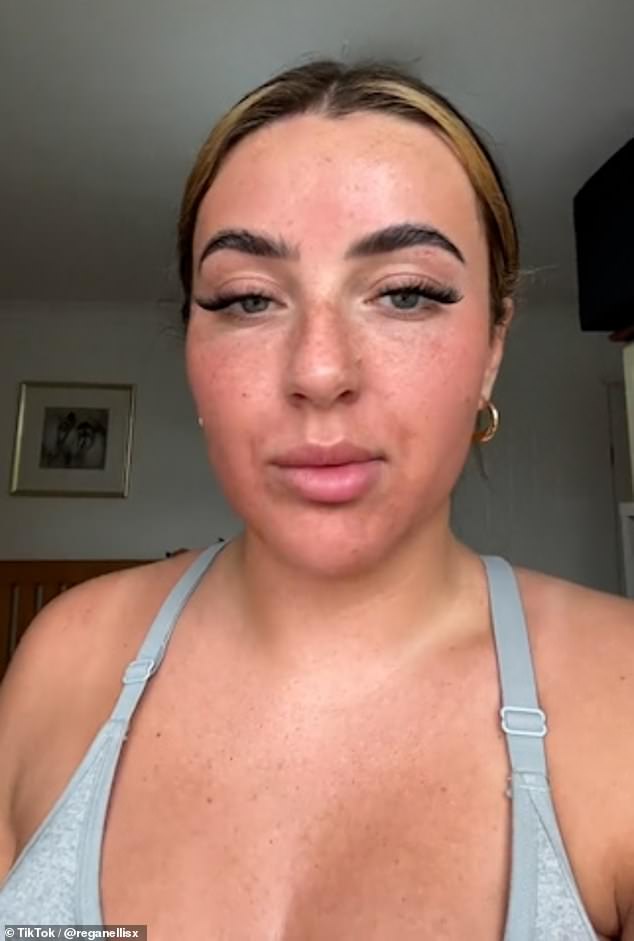 She continued: ‘So I went to the doctors and I went to get a blood test result up at the hospital in Milton Keynes and he sits there and before giving me my results goes: “Regan, you’re obese”.

Regan replied by saying that she was there for her blood test results only and not for a warning about her weight.

She said: ‘He proceeded to tell me how fat I was and I was like, ”Right, ok, brilliant. That’s given me a complex and ruined my day”.

‘So then he was like, ”I’m going to give you some weight-loss medication, you need to lose two and a half stone before Christmas.”

‘And I’m sat there thinking, “That’s like six months, so that’s not healthy to start”.’ 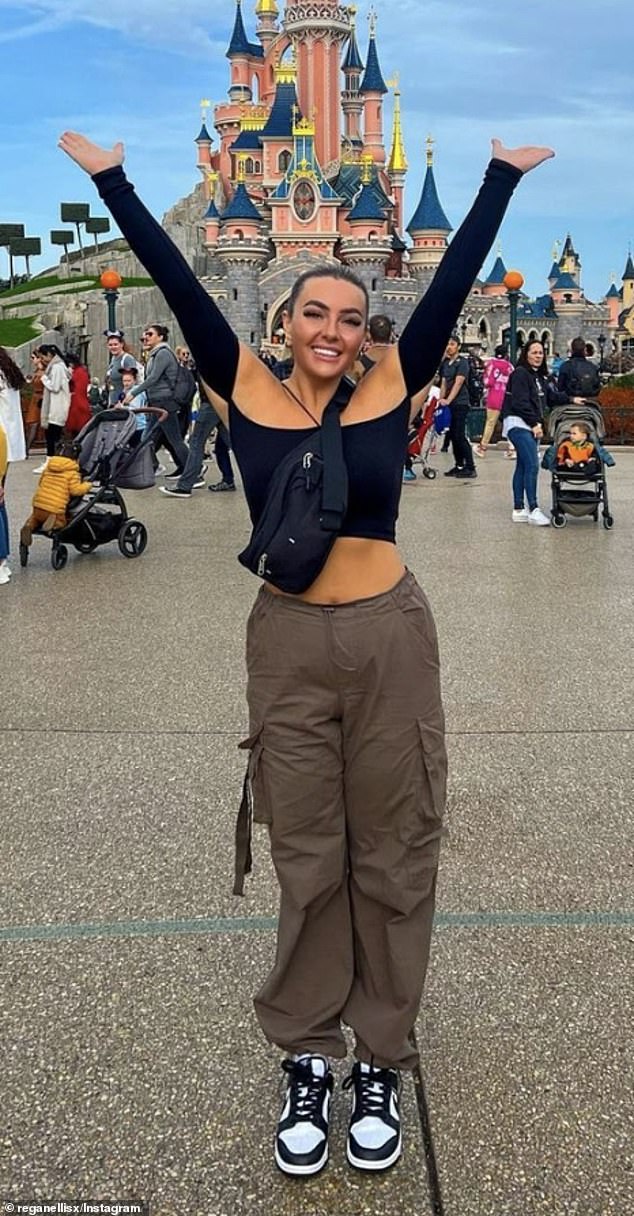 Regan showed off her toned midriff with her 31,000 Instagram followers recently during a  visit to Disneyland

She went on: ‘So he gave me these tablets called Orlistat, I call them Orli-s***, because you s*** your pants at any given opportunity and you get what I call booty juice. It’s not nice and it’s not pleasant, I took them for two weeks and started crying because I was on the toilet constantly.’

Orlistat is usually used alongside a doctor-approved reduced-calorie diet and exercise program to help significantly overweight people lose weight, according to medicinenet.com.

She explained that she started using an Ozempic pen, which works by reducing your appetite and is available for those with a body mass index of 30 and over, and she lost 10lbs.

She went back into the doctors for a check up and was measured again, but despite the weight loss she was told she still needed to lose another 10lbs because she was still over weight.

The TikToker said: ‘By this point I left a single tear go down my face and I am thinking. “OMG I am mortified”.

How to calculate your BMI

There are online calculators that can swiftly determine your body mass index (BMI) — but you can also work it out yourself.

‘What a complex to give a young girl, it’s not like we don’t feel crap about ourselves already. Just let me be happy, let me be who I am.

‘It’s no longer hot girl summer but it’s hot girl winter, and just let me be happy alright. So I am fuming and that just really really humbled me.’

Many people were shocked with the situation and rushed to the comments to share their thoughts.

One person wrote: ‘NAH the way my jaw dropped when I saw how slim you are.’

Another said: ‘I’m so confused by this because you look small and toned to me… is she reading this chart right.’

While someone else wrote: ‘Please ignore BMI measurements they don’t take into account any sort of muscle mass at all! Ignore them.’

Others explained some similar situations they have had in the doctors office.

One woman wrote: ‘Girl, I was sat in my gym gear, fittest I’ve been in years, really proud of my body and the nurse handed me a BHF diet book. Then I binge ate that day.’

Another wrote: ‘I went to the docs about headaches and was told I was fat and ignore the headaches.’

While someone else said: ‘I rang for the pill, told them my height and weight over the phone… got called obese! Amazing haha thanks doc. I’m now pregnant.’