News of the 80 per cent rise in the cap to £3,549 from October will have caused huge shock among pensioners, who are now coming to terms with the reality of what it means for them, according to Age UK.

It sets out six ways the incoming Prime Minister can help elderly people, such as ensuring those at risk of missing out on energy support receive it, introducing discounts for those most in need, and reinstating the triple lock on state pensions.

Rising bills: Candidates for Prime Minister should make it clear that they will stand by those with most to fear from soaring inflation, says Age UK

The Bank of England has forecast the headline rate of inflation will top 13 per cent this autumn, while investment bank Citi has predicted it could peak at a near 50-year-high of 18.6 per cent early next year, and Goldman Sachs said it could reach 22 per cent amid soaring energy prices.

This includes the £650 payment for those on means-tested benefits, including pension credit, an extra £300 for eight million pensioner households to help them cover rising energy costs this winter, and £150 for those on disability benefits – see below.

Caroline Abrahams, charity director at Age UK, says of the Tory leadership contest due to conclude on 5 September:  ‘It would be extremely helpful if both candidates made it clear that they will stand by those with most to fear from soaring inflation, among them many pensioners, over the difficult months to come.

‘We understand that there is essentially a transition underway between one Prime Minister and the next, but every day the economic forecasts seem to worsen and yet there is no clear word from the centre about how they will respond.

‘Unfortunately, this is increasing the sense of insecurity many older people feel.’

What help does Age UK want for the elderly?

Age UK adds that energy providers have a duty to offer support if people are struggling with bills or debt, and you can contact your supplier direct to ask about an affordable repayment plan.

– Provide a significant new package of financial support which will fully mitigate the impact of these price rises for vulnerable consumers.

– Help those older people who are at greatest risk of missing out on energy support, particularly the around one million older households with a pre-payment meter, those living in park homes, those who are ‘off grid’, care home residents and people without access to the internet.

– Reassure older people in Northern Ireland that help will reach them despite the lack of a sitting Assembly.

– Keep their promise to reinstate the triple lock in April 2023.

>>>State pension could hit £10,880 a year if inflation keeps surging: Will the Government keep its triple lock promise this time?

– Introduce a social tariff into the energy market which discounts bills for those most in need, automatically enrols eligible households, sits alongside existing support and is mandatory for all suppliers.

– Help insulate vulnerable consumers from spiralling energy bills by investing in household energy efficiency for those on the lowest incomes.

‘I can’t really afford boiler insurance, but what if it stops working in the middle of winter’

Mary is in her late 70s and has various medical conditions affecting her mobility. She lives alone in a static home in Somerset. She spoke to Age UK after the latest energy price cap hike.

‘Things are very tight, and that’s before the latest increases. I’m not using my heat, electric. No TV or radio, or just for short times.

‘Anything that uses the electric, I try to keep off. And the ground rent has just gone up, so that’s something else.

‘My sister is in a home with carers because of her dementia, so it costs the petrol to see her. I’m starting to think I’m going to be forced to cut back on food to save for the petrol.

‘I’m very worried about my boiler insurance. I can’t really afford it anymore, but I worry about what happens if it stops working. I’m nearly 80; I can’t have no hot water in the middle of winter!

‘And this £400. I read people like me can’t get it because we live in a park home. I never wanted to claim anything, but I don’t know how they expect us to survive.’

>>>Read more comments on the crisis from elderly people below

Soaring energy bills are a ‘truly frightening prospect’ that most elderly people could not have prepared for and never expected to face at this point in their lives, according to Abrahams.

She says the new Prime Minister should make it their first act to provide additional support for households who are set to be overwhelmed by rising inflation.

‘We are fast approaching a national emergency which will leave a significant proportion of the population unable to afford even a basic standard of living.

‘Every day older people are telling us how scared they are,’ adds Abrahams. ‘They need urgent reassurance from the Government that they will not abandon them. It’s later than the Government thinks.’

A government spokesperson said: ‘We know people are incredibly worried about rising energy bills, following unprecedented gas prices across the continent driven by global events, including Putin’s aggression in Ukraine and his weaponisation of energy in Europe.

‘Direct support will continue to reach people’s pockets in the weeks and months ahead, targeted at those who need it most like low-incomes households, pensioners and those with disabilities.

‘As part of our £37billion package of help for households, one in four of all UK households will see £1,200 extra support, provided in instalments across the year, including millions of pensioners receiving an extra £300 through their Winter Fuel Payments.

‘The civil service is also making the appropriate preparations in order to ensure that any additional support or commitments on cost of living can be delivered as quickly as possible when the new Prime Minister is in place.’ 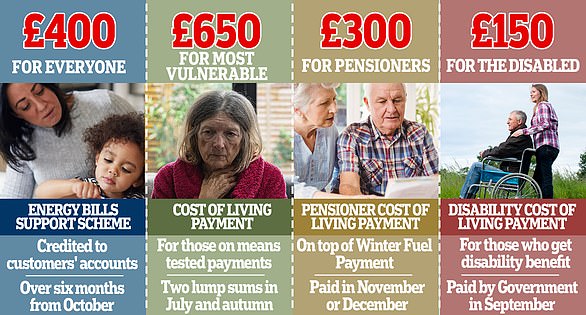 Former Pensions Minister and campaigner Ros Altmann says: ‘It is vital that pensioners are not frightened to heat their homes this winter.

‘The Government has already announced significant support for those on pension credit but pensioners just above the means test threshold and those who are too proud to claim are left much poorer than those with lower pensions or savings and this will jeopardise their health.

‘It’s time for Government to roll winter fuel payments into the state pension and make them taxable to recoup some of the outlay for taxpayers. Adding more tax free money is not the best solution.’

Altmann adds that is it also important the Government reforms the standing charge and social housing heating costs.

She says these impose higher bills on single pensioners least able to cope, and struggling on fixed incomes way behind rising living costs.

What older people say about bills

Age UK carries out surveys of over-65s who are struggling as inflation worsens. Here is what older people have recently told the charity about the impact of rising bills on their lives.

‘The cost of electric to cook a meal. Starting to live on sandwiches. Also I drink more tap water as the cost of boiling a kettle for a cup of tea is expensive. Don’t know what I will do when winter comes and the cost of gas and electric goes up again.’

‘As pensioners we have no prospect of improving our incomes and we simply cannot keep up with the dramatic increase in inflation. I have just received my new plan details from my energy provider which is £400 per month. That’s before we eat or anything else. It is totally unmanageable and so, so scary. Think they are trying to kill us off with worry.’

‘I worry how long before my income is less than what’s going out. What will happen if I have an emergency that I have to pay for. I have already started to cut back. Soon no treats.’

‘The price of fuel, gas and food prices are now out of control. We are still in summer at the moment and I am dreading winter. Eat or stay warm if you can afford to. The situation is frightening especially if you don’t have other income apart from state pension.’