As the cost of energy spirals, it’s all hands on deck to stop bills from decimating the finances of households. On Thursday, new Prime Minister Liz Truss revealed the Government’s latest support package, a cap on gas costs that could be worth around £150billion.

The move will freeze energy bills at about £2,500 a year until 2024, sheltering households from the true cost, which is predicted to rise to £5,386 on average by January.

This is welcome relief for beleaguered families, who are already struggling under the weight of the rising cost of everything – from rent and mortgages to shopping and bills. But even with this intervention, households will still need to do their bit to keep energy bills in check.

They will still be double what they were a year ago.

One course of action that all households can take in the coming weeks is to ensure their heating controls are set properly. Done correctly, it will save them hundreds of pounds on energy bills over the coming months.

Last week, I sought expert advice on this issue from Jerry Whiteley, technical manager at the Chartered Institute of Plumbing and Heating Engineering.

I invited him to my home in East London to give me the lowdown on the six simple things I could do for free to get my home fit for winter, against a backdrop of big energy bills.

1) Check the radiator dial on your boiler

Most boilers have a control that sets the temperature at which water is piped around the radiators. In the depths of winter, I have been known to whack this setting right up under the false belief that it was necessary to get the house nice and warm.

But Jerry tells me that you can often get your home just as warm by keeping the radiator dial on a lower setting – and save money in the process.

‘You can usually achieve the same temperature at a lower setting, but it may take a few minutes longer to get there,’ he says.

‘It’s like the difference between driving from London to Manchester at 50mph or 80mph. At the lower speed, it’ll take you longer, but you’ll still get to the same destination and save money from fuel efficiency.’

Jerry recommends a temperature of around 55C for optimal warmth and efficiency. Most boilers have a separate temperature display and you can simply move the radiator dial until it reaches around 55C.

Some older boilers do not show the temperature. In this case, you can buy a pipe thermostat for a few pounds, which you can attach to the pipe underneath your boiler to do the same job.

There are hundreds of different types of boilers and so this, like all of Jerry’s tips, are useful rules of thumb, but may need to be adapted for your own set-up at home. How your household uses energy also affects the optimal settings for you.

Next we move on to the hot water dial, found on most combination boilers like mine. This determines the temperature at which water comes out of the hot taps.

‘Many people set this dial too high and then have to mix in cold water to get the right temperature for showering and washing the dishes,’ says Jerry.

‘This uses more water – which in turn can add to both your water bill and consumption.’

Jerry says an optimal temperature is around 43 degrees if you have a combination boiler, which is one that only heats the water that you need.

However, if your heating system involves a hot water cylinder, you will need to keep the temperature much higher – more like 60 degrees.

This is because legionella bacteria can multiply in cooler water, leading to illness if you inhale it.

Jerry does his best to hide his dismay, but I can tell he is slightly appalled when he sees the exposed copper pipes coming out from my boiler.

‘You can buy a bit of pipe insulation for a couple of pounds from a DIY store and you will make your money back several times over during the winter,’ he says.

The boiler is under the stairs where all sorts of flotsam – including camping equipment, mops, and a fold-up bike – is stored. It turns out that because the pipes are not insulated, they are warming up all this stuff instead of the heat being directed to radiators. 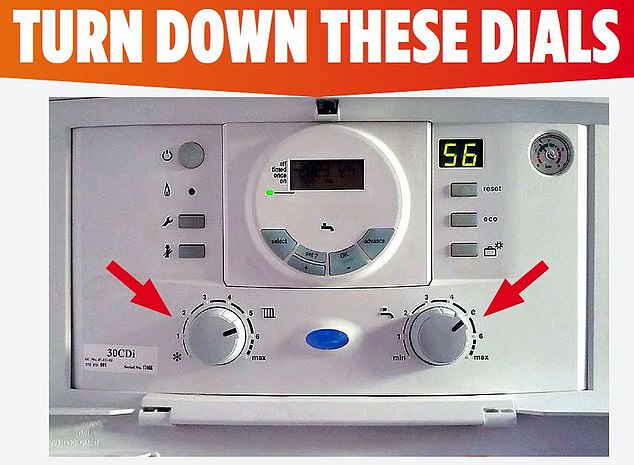 Your home will be just as warm if you turn down two dials on your boiler – the left one pictured above controls the water flowing to the radiators, while the right one changes the temperature in taps

In other words, we are spending money to keep our camping equipment warm instead of ourselves.

My DIY job this weekend will be buying and fitting pipe insulation. It can be cut down to size with a good pair of scissors and fitted in a couple of minutes.

Jerry adds that lots of households with a hot water cylinder make such a mistake. ‘People often store their towels with their cylinder and congratulate themselves on having lovely warm towels,’ he says. ‘But it can be a sign they need better insulation.’

Millions of households set their heating to go on automatically throughout the colder months. But not all check that the timings are still right for them every year.

‘Have a think about how your habits might have changed,’ says Jerry.

‘For example, you may find that you no longer need the heating going on at the crack of dawn if you are getting up later these days.’

Jerry recommends setting it at between 18C and 21C, but it comes down to personal choice, need and affordability.

The more radiators you have on, the higher your bills, so it makes sense to switch them off or down low in rooms you aren’t using.

The dials on them, called thermostatic radiator valves, measure the temperature in the room. So, Jerry says it is essential they are clean and dust free and away from direct sunlight to get an accurate reading.

If you don’t have control valves on your radiators, you could save hundreds of pounds by getting them installed, he adds. Without them, you have little control over the temperature blasted out.

Finally, Jerry recommends that households have their boiler serviced every year and seek out a professional plumbing and heating installer if you need to upgrade your heating and hot water controls.