Sir Stirling Moss has passed away aged 90 after a long illness as his wife Lady Moss reveals the British racing legend ‘died as he lived, looking wonderful’

Sir Stirling Moss has died at the age of 90.

The great motor-racing driver and one of the most lionised figures in the history of British sport, he ‘closed his eyes’ in the early hours of Easter morning.

Lady Moss was at his bedside as he died, having nursed him through a long illness, at their Mayfair house. She told the Daily Mail: ‘He died as he lived, looking wonderful. 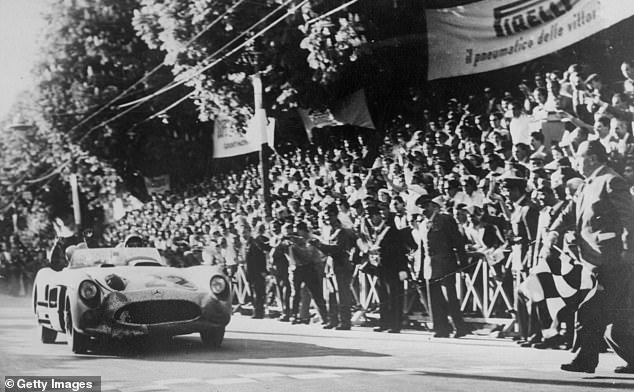 ‘He simply tired in the end and he just closed his beautiful eyes and that was that.’

Moss’s fame was secured in the years after the Second World War by his style and skill that earned him acclaim as the greatest all-round racer ever. His versatility won him 212 of his 529 races in every conceivable kind of car.

He famously never won the Formula One world title but that was owing to his preference for British machinery and acts of conspicuous sportsmanship that denied him the chance.

He would rather win a race that play the percentages for the sake of the title. Between 1955 and 1961, he was championship runner-up on four occasions and third three times.

Stylish, debonair, brave, he kept two books of cuttings in the his Mayfair house – one of motor racing, the other of ‘crumpet.