Legendary Hollywood actor Sidney Poitier, the first black man to win an Oscar for best actor, has died. He was 94.

His passing was confirmed on Friday morning by Fred Mitchell, Minister of Foreign Affairs, for the Bahamas, where Poitier grew up. His cause of death is not yet known.

Twice-married, he had four daughters with his first wife Juanita Hardy and two with his second wife Joanna Shimkus.

RIP: Oscar-winning Hollywood star Sir Sidney Poitier has died at 94. He made history as the first black man to win an Oscar for best actor (above) in 1964 for Lillies In The Field 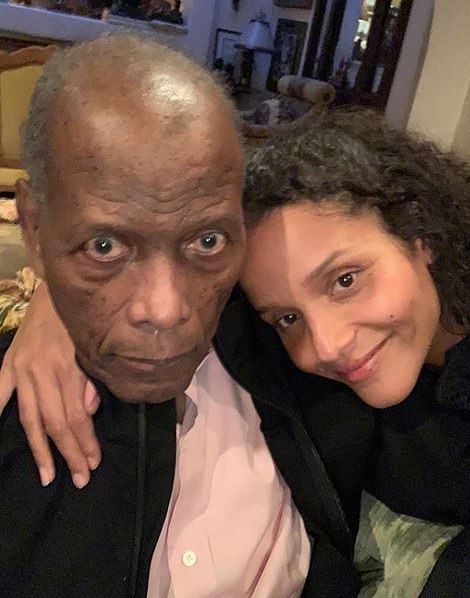 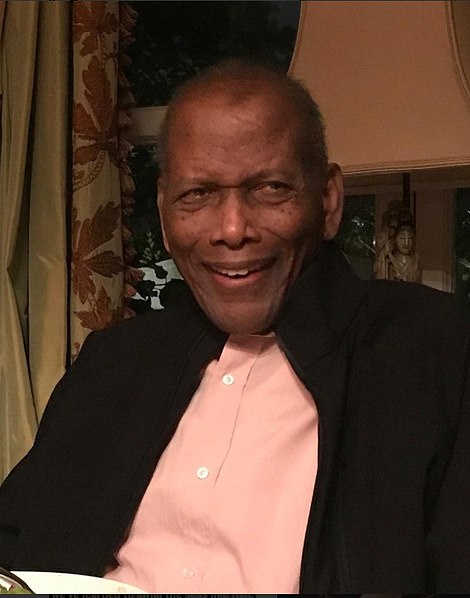 In the last known photo of him, Poitier is seen left in February 2021 celebrating his 94th birthday. Right, he is at his 92nd birthday in 2019

During his first marriage, he began a nine-year affair with actress Diahann Carroll who he met when they worked together on the 1959 movie Porgy and Bess.

In 2016, Poitier was awarded a BAFTA fellowship, but did not attend the event due to ill health.

Actor Jeffrey Wright lead tributes on Friday, tweeting: ‘Sidney Poitier. What a landmark actor. One of a kind. What a beautiful, gracious, warm, genuinely regal man. RIP, Sir. With love.’

Poitier received the Kennedy Center Honor in 1995 and an received the Presidential Medal of Freedom from Barack Obama in 2009.

He was also awarded an Knight Commander of the Order of the British Empire by Queen Elizabeth II in 1974. 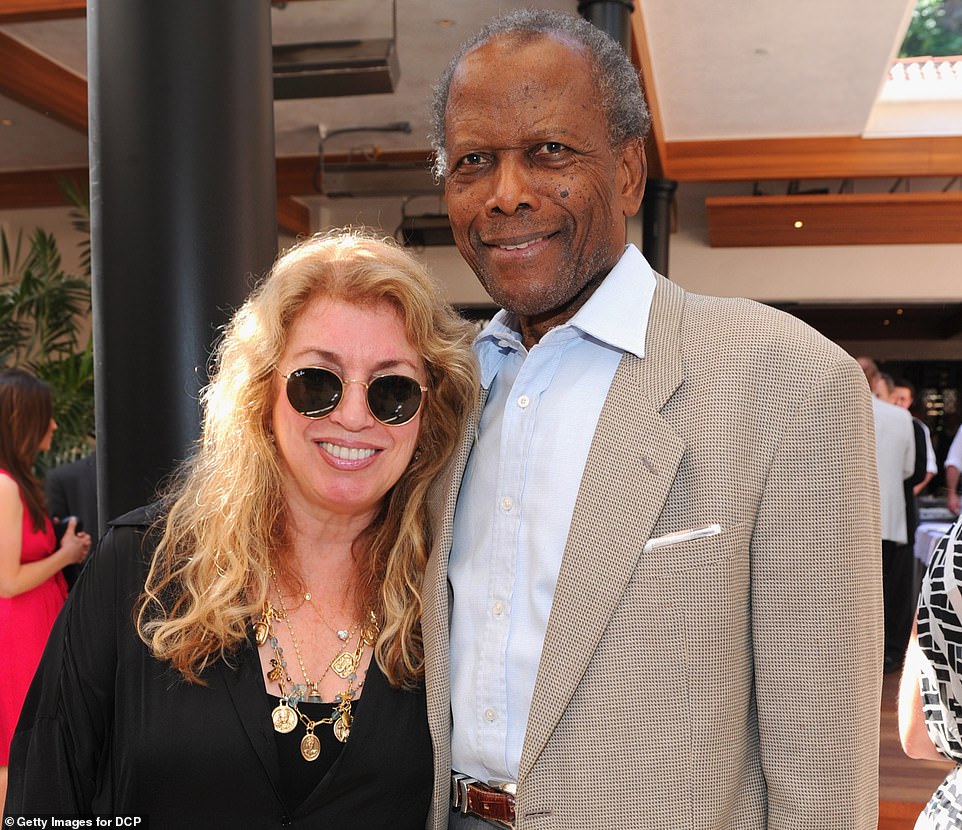 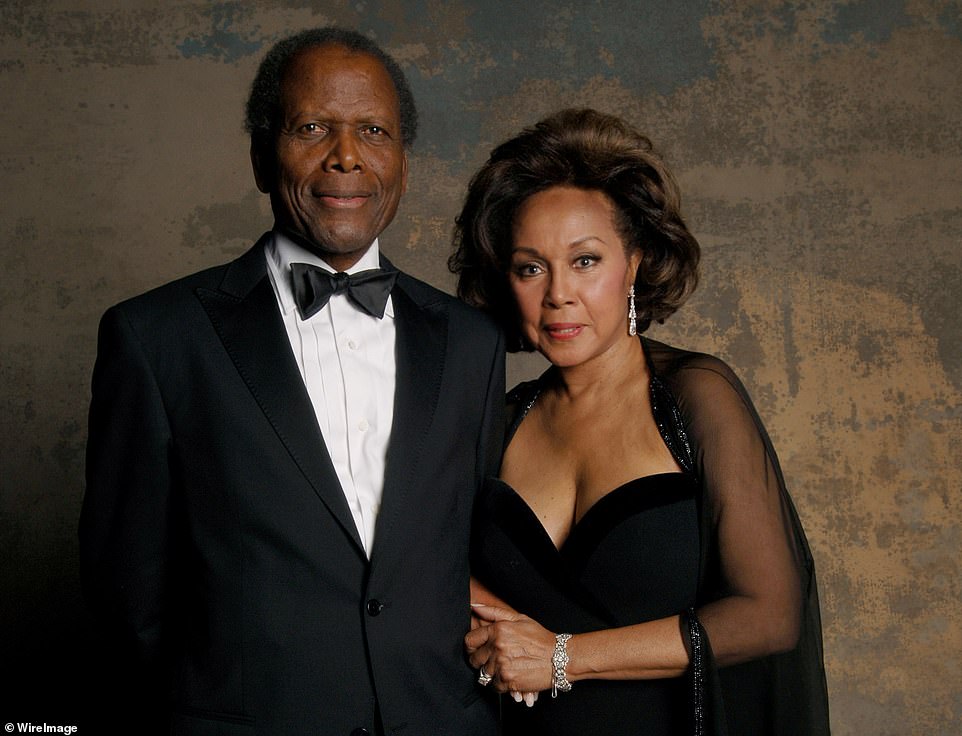 During his first marriage, Poitier began a nine-year affair with actress Diahann Carroll (with him in 2005) who he met when they worked together on the 1959 movie Porgy and Bess 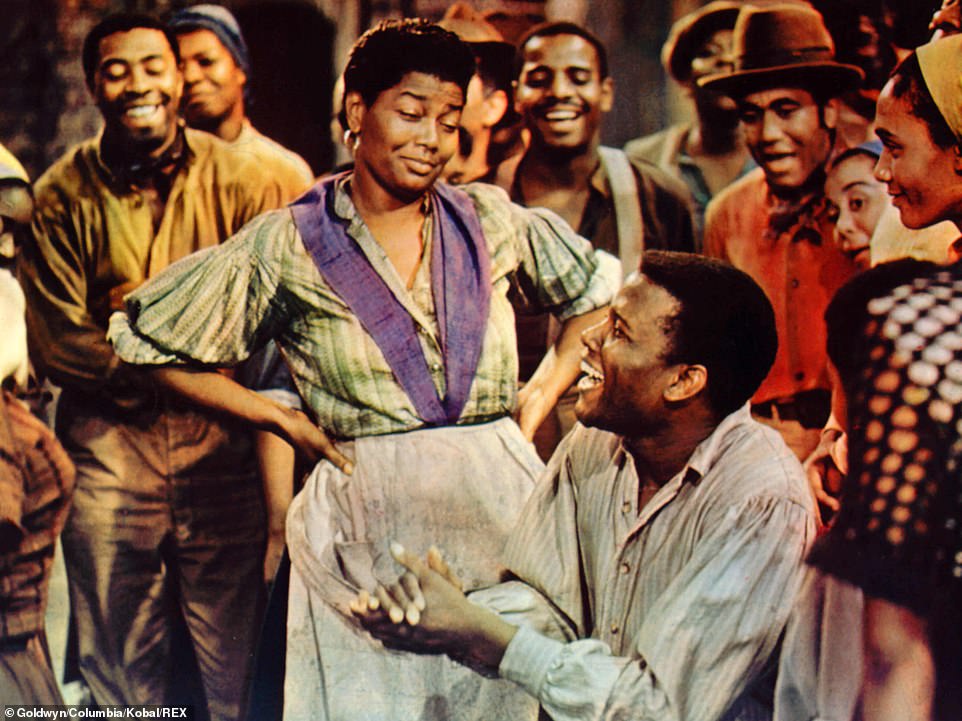 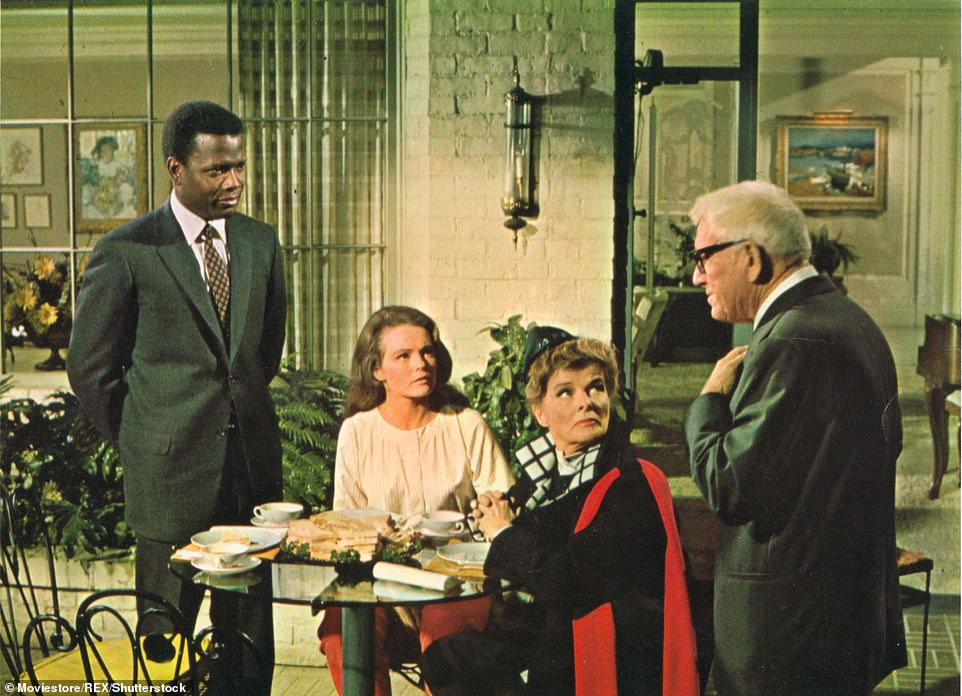 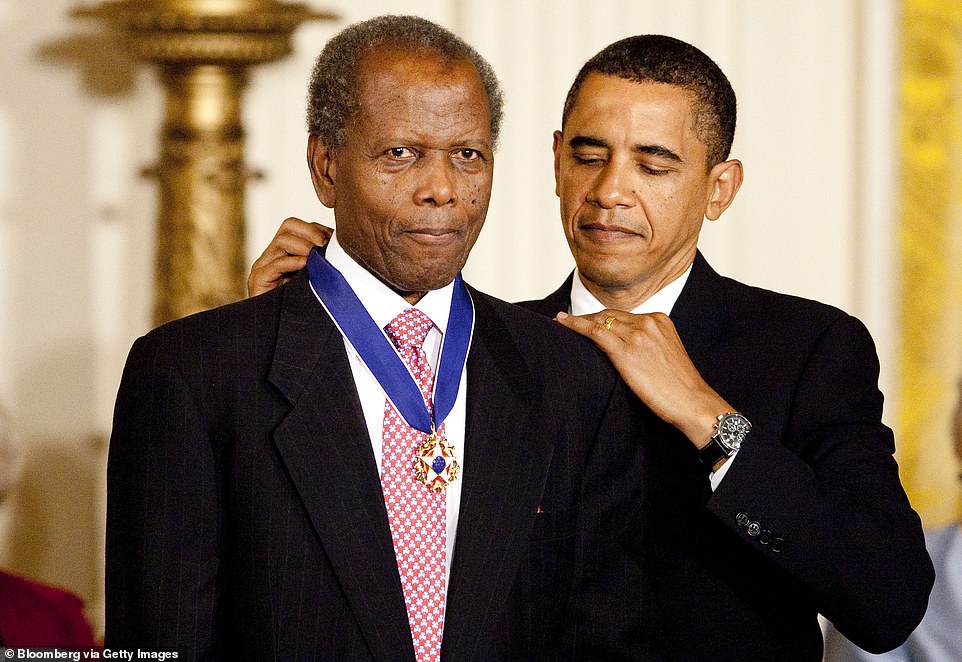 Actor Sidney Poitier receives the Presidential Medal of Freedom from U.S. President Barack Obama during a ceremony in the East Room of the White House in 2009 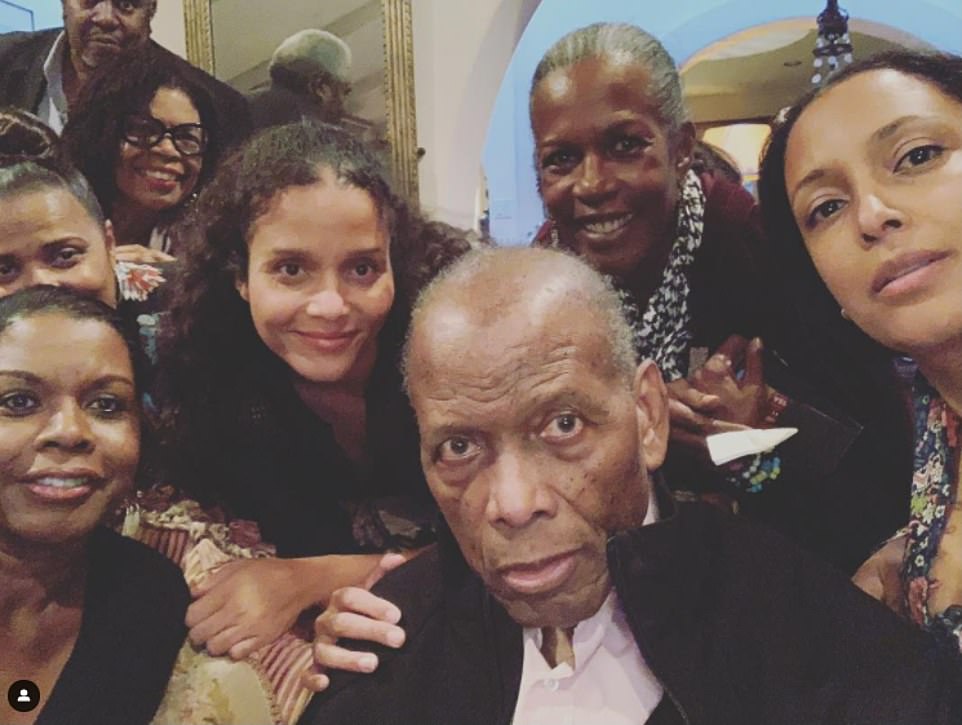 Poitier created a distinguished film legacy in a single year with three 1967 films at a time when segregation prevailed in much of the United States.

In Guess Who’s Coming to Dinner he played a black man with a white fiancée and In the Heat of the Night he was Virgil Tibbs, a black police officer confronting racism during a murder investigation. He also played a teacher in a tough London school that year in To Sir, With Love.

At the time, Poitier had already won his history-making best actor Oscar for Lilies of the Field in 1963, playing a handyman who helps German nuns build a chapel in the desert.

Five years before that Poitier had been the first black man nominated for a lead actor Oscar for his role in The Defiant Ones. 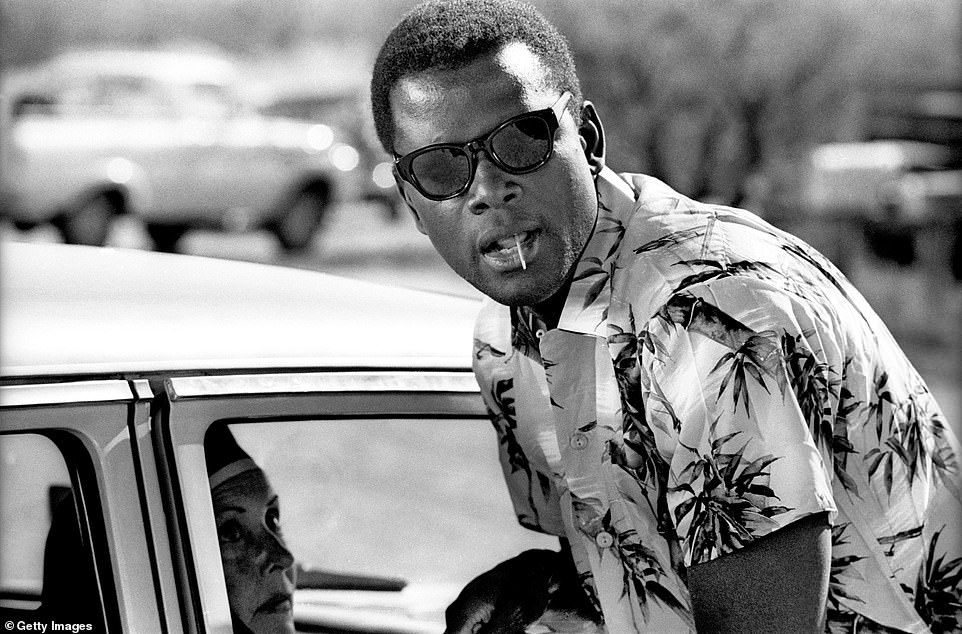 Poitier won his history-making best actor Oscar for Lilies of the Field in 1963, playing a handyman who helps German nuns build a chapel in the desert 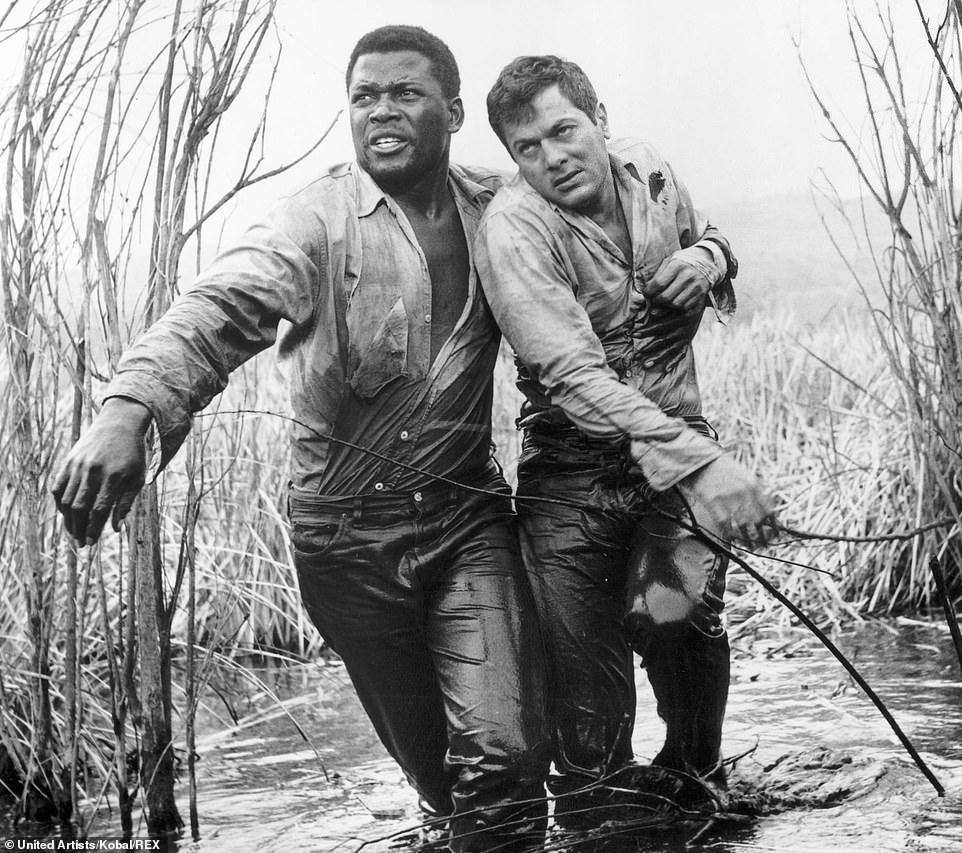 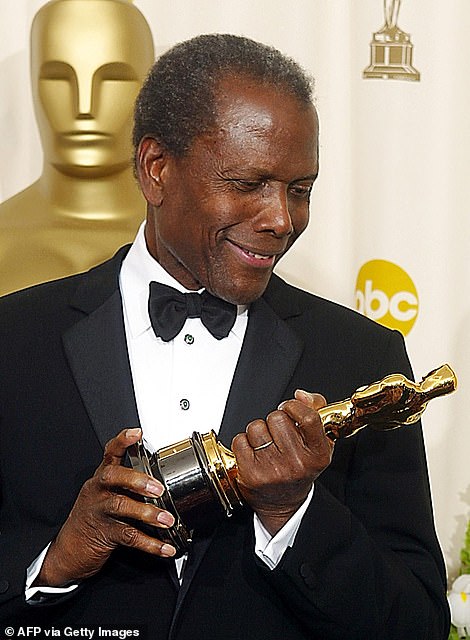 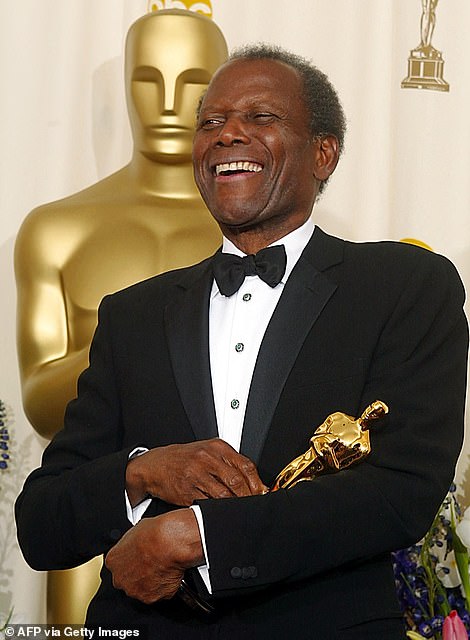 His other classic films of that era included A Patch of Blue in 1965 in which his character is befriended by a blind white girl, The Blackboard Jungle and A Raisin in the Sun, which Poitier also performed on Broadway.

Poitier was born in Miami on February 20, 1927, and raised on a tomato farm in the Bahamas, and had just one year of formal schooling. He struggled against poverty, illiteracy and prejudice to become one of the first black actors to be known and accepted in major roles by mainstream audiences.

Poitier picked his roles with care, burying the old Hollywood idea that black actors could appear only in demeaning contexts as shoeshine boys, train conductors and maids.

‘I love you, I respect you, I imitate you,’ Denzel Washington, another Oscar winner, once told Poitier at a public ceremony.

As a director, Poitier worked with his friend Harry Belafonte and Bill Cosby in ‘Uptown Saturday Night’ in 1974 and Richard Pryor and Gene Wilder in 1980’s ‘Stir Crazy.’

Poitier grew up in the small Bahamian village of Cat Island and in Nassau before he moved to New York at 16, lying about his age to sign up for a short stint in the Army and then working at odd jobs, including dishwasher, while taking acting lessons. 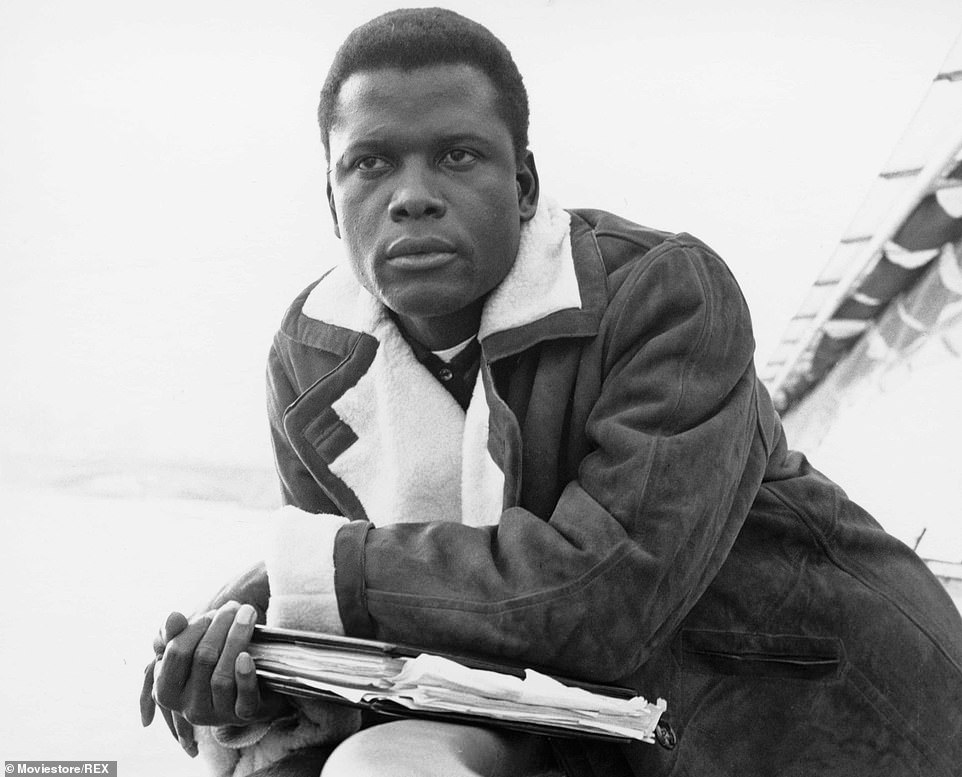 Poitier picked his roles with care, burying the old Hollywood idea that black actors could appear only in demeaning contexts as shoeshine boys, train conductors and maids 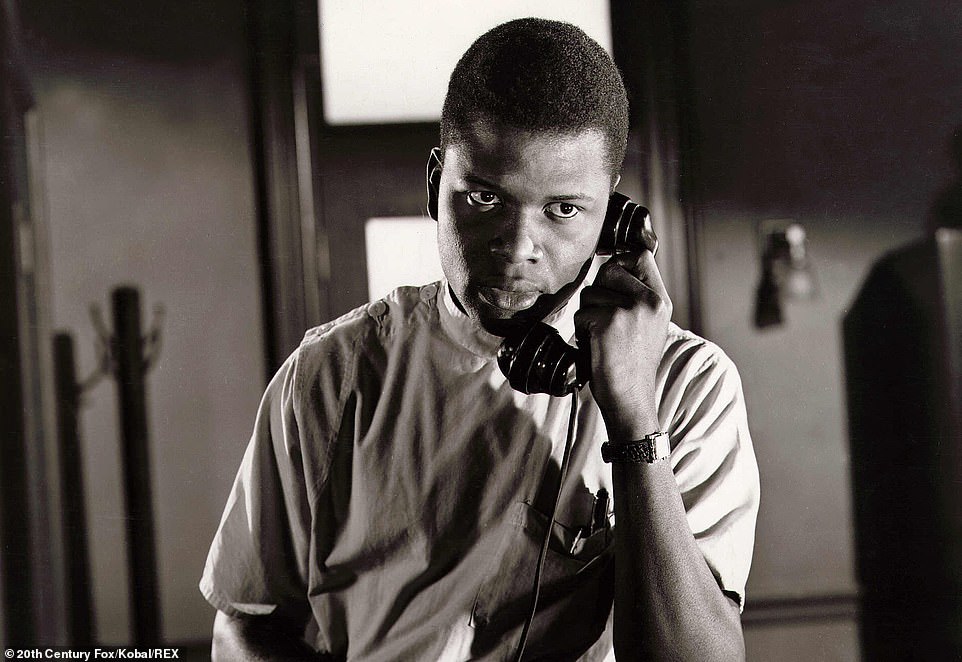 Sidney Poitier is seen in No Way Out in 1950, his first movie role after he found success on Broadway

The young actor got his first break when he met the casting director of the American Negro Theater. He was an understudy in ‘Days of Our Youth’ and took over when the star, Belafonte, who also would become a pioneering black actor, fell ill.

Poitier went on to success on Broadway in ‘Anna Lucasta’ in 1948 and, two years later, got his first movie role in ‘No Way Out’ with Richard Widmark.

In all, he acted in more than 50 films and directed nine, starting in 1972 with ‘Buck and the Preacher’ in which he co-starred with Belafonte.

In 1992, Poitier was given the Life Achievement Award by the American Film Institute, the most prestigious honor after the Oscar, joining recipients such as Bette Davis, Alfred Hitchcock, Fred Astaire, James Cagney and Orson Welles.

‘I must also pay thanks to an elderly Jewish waiter who took time to help a young black dishwasher learn to read,’ Poitier told the audience. ‘I cannot tell you his name. I never knew it. But I read pretty good now.’

In 2002, an honorary Oscar recognized ‘his remarkable accomplishments as an artist and as a human being.’

Poitier married actress Joanna Shimkus, his second wife, in the mid-1970s. He had six daughters with his two wives and wrote three books – ‘This Life’ (1980), ‘The Measure of a Man: A Spiritual Autobiography’ (2000) and ‘Life Beyond Measure: Letters to My Great-Granddaughter’ (2008). 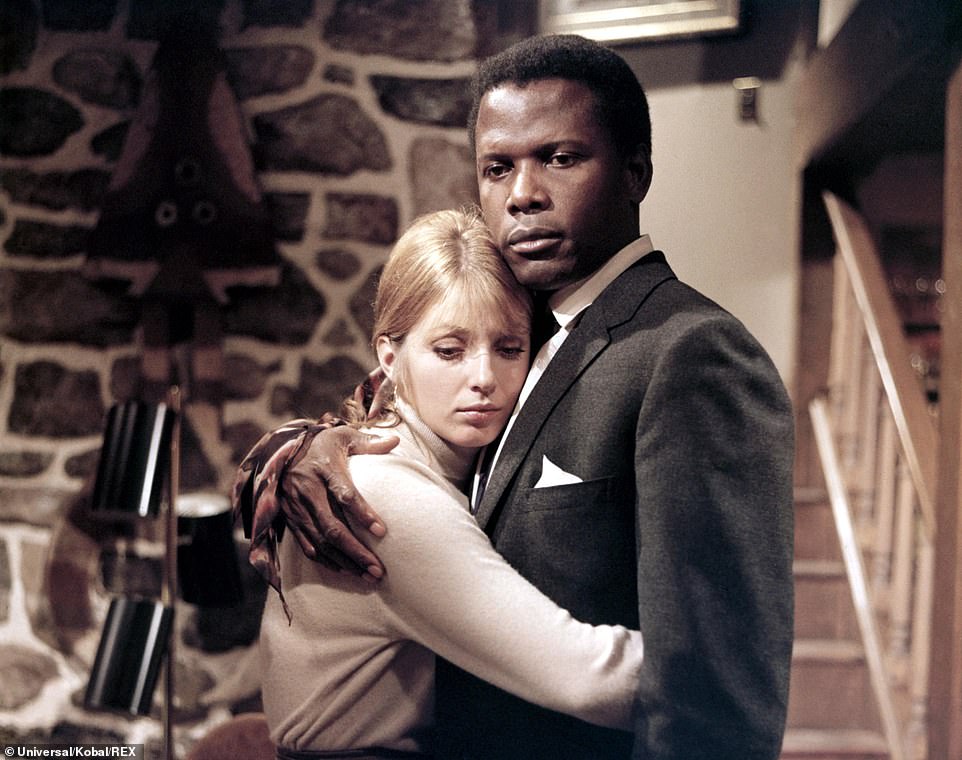 Poitier married actress Joanna Shimkus, his second wife, in the mid-1970s. Above they are seen together in The Lost Man 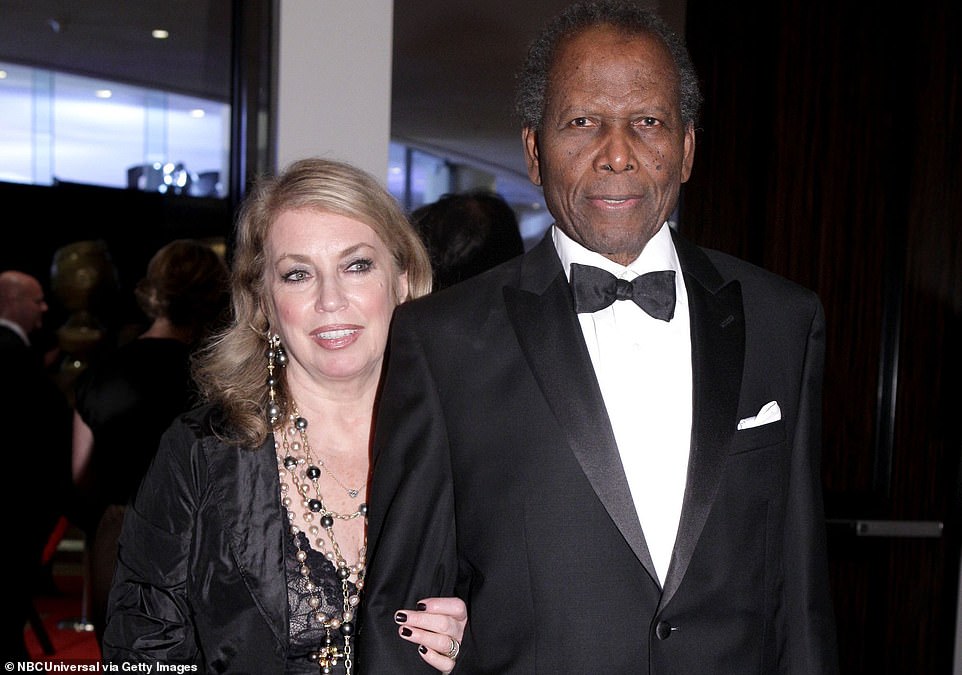 ‘If you apply reason and logic to this career of mine, you’re not going to get very far,’ he told the Washington Post. ‘The journey has been incredible from its beginning. So much of life, it seems to me, is determined by pure randomness.’

Poitier was knighted by Britain’s Queen Elizabeth II in 1974 and served as the Bahamian ambassador to Japan and to UNESCO, the U.N. cultural agency. He also sat on Walt Disney Co’s board of directors from 1994 to 2003.

In 2009, Poitier was awarded the highest U.S. civilian honor, the Presidential Medal of Freedom, by President Barack Obama.

The 2014 Academy Awards ceremony marked the 50th anniversary of Poitier’s historic Oscar and he was there to present the award for best director.