Ministers must act now to end the misery of homeowners who are stuck with fire-trap flats, writes Father of the House of Commons SIR PETER BOTTOMLEY

By Sir Peter Bottomley For The Daily Mail

Hundreds of thousands of leaseholders face ruinous costs if they are forced to pay for the mistakes of others.

But why? Two prime ministers, three secretaries of state and successive housing ministers stated leaseholders should not pay to make their homes safe.

Now, Parliament must ensure the Government indemnifies leaseholders from the costs.

It will take years to allocate blame and costs. The only certainty is that the leaseholders are innocent. Faults were made by regulators, governments, component manufacturers, designers, developers, builders and sales forces.

Listen to the heartbreaking testimony by the cladding groups in the North and the Midlands. Hear the evidence by the National Leasehold Campaign.

‘Buy your own home!’ Buy? No. The more accurate description is lease-renter. Pay for a lease to own nothing except the possible liability to pay for the actions, decisions and sometimes the greed of others.

In law, a leaseholder is the most vulnerable type of tenant.

The social tenant is protected. The private tenant can leave liabilities behind by moving away at the end of the rental period.

After the Grenfell tragedy, many leaseholders consulted the Government-funded Lease advisory service. Some were advised to go the property tribunal for protection against the costs of replacing dangerous cladding systems. 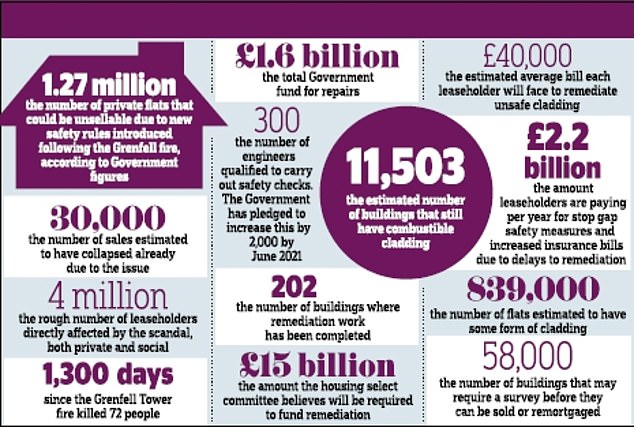 The campaigning charity Leasehold Knowledge Partnership knew better. Feudal lease terms, as if carried forward from the time of William the Conqueror, could not protect the vulnerable leaseholder.

Nearly three years ago, I warned that instead of waiting for years for an inquiry to reach conclusions, the Government should have a round-table meeting in the open with the landlords, the builders and representatives of leaseholders.

1 The burden of paying for repairs to be lifted from leaseholders.

2 The Government to guarantee necessary funding will be available ASAP. Only the Government can provide comprehensive up-front funding – and work cannot begin in earnest until it does. Ministers can recover costs later.

4 Reduce the number of unsellable flats caught up in red tape. Thousands of low-risk buildings need forms to prove they are safe, but this could take up to ten years. Sensible guidance would allow homeowners to sell their properties again.

5 Ensure firms responsible for defects pay their fair share, minimising the burden on the taxpayer.

It is time to settle on simple, effective ways to remove and replace products that still endanger residents in blocks of flats. Make funds available at once so each block is made safe. End the costs of expensive ‘waking watch’ fire patrols. Make homes safe and saleable.

The responsibility for paying should be apportioned later between those who caused the disaster. The only condition is that the leaseholder is recognised as not responsible.

Can we trust the Prime Minister and ministers to achieve justice? They must stick to their words.

Months ago, the National Audit Office stated that the pace of progress lagged behind the ministry’s own expectations, particularly in the private residential sector. That is why it’s so vital that all buildings are now made safe for residents.

No leaseholder, lease-renter, should suffer anxiety facing costs well beyond their ability to pay. For there are huge sums involved here: replacing unsafe cladding on buildings may total £15 billion, nearly ten times the funds now available.

Just 202 dangerous buildings have been fixed completely so far, but the Government’s own estimates suggest there could be 11,760 in total.

Until this problem is fixed, people will continue to suffer. Meanwhile, every constituency has flats which have become a frozen part of the housing market.

Both ethically and politically, the Government must act now to fulful its promises.