The first person who came to see me in hospital when I woke the morning after having a stent inserted into a coronary artery was not a doctor or a nurse, but a fitness trainer.

The trainer said I was booked onto a weekly exercise programme starting in a fortnight’s time, when the acute phase of my recovery would be over.

It began on time and lasted three months. There was no sweat for the first few weeks as I walked more and more briskly on the treadmill, but I did sweat before the three months were up.

The exercise — and the encouragement of other survivors — were wonderful as they gave me back both the confidence and the fitness lost in the two weeks I was housebound.

The first person who came to see me in hospital when I woke the morning after having a stent inserted into a coronary artery was not a doctor or a nurse, but a fitness trainer. Just 12 hours earlier, I’d had a heart attack, signalled by severe chest pain

The consultant who inserted the stent had also prescribed the exercise and helped me understand that fitness was even more important than it was before the heart attack — as it is for people with any chronic problem.

Exercise is literally a miracle treatment, with no side-effects, only benefits.

Further evidence of the miraculous nature of exercise therapy was provided by my younger daughter, who developed type 1 diabetes as a teenager and fractured her spine in a skiing accident five years later.

She needed surgery but suffered severe post-surgical pain and immobility, which compounded her diabetes problems.

Yet she dealt with her health problems in a gym, not in a clinic, with the punchbag more important than any drug.

Indeed, in 2015 the Academy of Medical Royal Colleges, the body that advises on standards of care and education across the UK, published a report with the unusually dramatic title Exercise: The Miracle Cure.

This summarised the evidence about the benefits of exercise for common physical and mental health problems, emphasising that the benefits outweigh any risks. 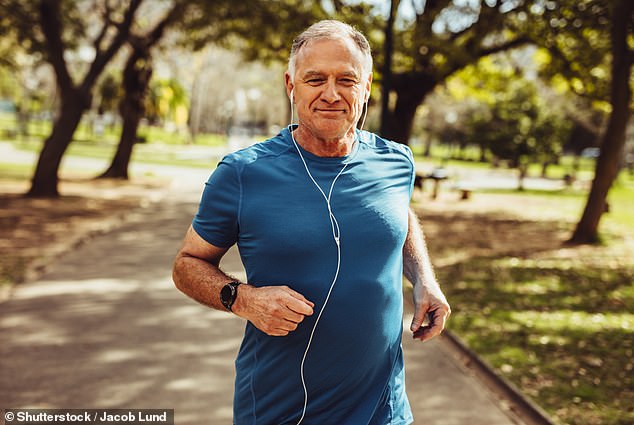 For example, it said that for type 2 diabetes, ‘exercise has a statistically and clinically significant beneficial effect on [blood sugar] control’. For arthritis, ‘physical activity improves symptoms of osteoarthritis by 22 to 83 per cent and does not lead to worsening of this condition. It has benefits in reducing pain, improving function, improving quality of life and mental health’.

Yet this advice, despite very strong evidence of safety and effectiveness, is not yet getting transmitted by the NHS.

Take, for example, a friend who coincidentally had a heart attack the same week as me.

Because she was admitted to a general medical ward, and not a cardiology ward, after her stent was put in she was told she had ‘better take it easy’. This left her depressed and tearful for days because she felt her life was over although only in her 50s, while I was getting geared up for my classes. Exercise cured her: we got her onto the right pathway.

Exercise is still not generally promoted or prescribed by the NHS. Since the end of my three-month, post-stent gym sessions, not one piece of encouragement or information about the need to exercise has been given to me.

By contrast, I’ve had at least 1,000 leaflets from all those boxes of pills I collect from the pharmacy describing the benefits and side-effects of my medication.

Of course, people need more than just information about exercise. Many also need encouragement, coaching and support, and there are just not enough doctors and physiotherapists to meet even the acute needs of the population. Physiotherapist vacancy rates are running as high as 20 per cent.

So how can exercise or activity therapy not only be recommended but delivered?

The answer is to engage personal trainers, many of whom currently work in gyms with healthy young people. This group of professionals are knowledgeable about the human body and psychology and need to be drawn into healthcare.

To support them, there is the wonderful We Are Undefeatable campaign being delivered by 16 of the biggest health and social care charities, backed by Sport England and the National Lottery.

Activity therapy could significantly reduce the demand for healthcare by preventing recurrence of disease or by reversing, or even curing, people with long-term conditions such as depression, type 2 diabetes and high blood pressure. It would also reduce the need for social care by preventing or delaying the onset of frailty, disability and dementia.

Every locality would have its own NHS Activity Therapy Service.

This revolution is already under way and, to fund it, resources should be shifted from interventions that are ineffective — about 10 per cent of all prescribed drugs, according to a Department of Health report on over-prescribing. This wasted money adds up to about £1 billion a year.

This is not just about reducing mortality to help people live longer, it is to enable people to live longer, better.

Sir Muir Gray is an NHS public health consultant and a professor of primary healthcare at Oxford University.