Residents in the city, home to around 600,000 people, and two neighbouring areas were banned from visiting any other households back at the start of September, in a desperate attempt to curb the spread of Covid-19.

The decision, announced by First Minister Nicola Sturgeon, was prompted by figures revealing Glasgow’s spiralling outbreak was to blame for nearly a third of new cases in Scotland.

Around 37 people were testing positive for the life-threatening infection each day on September 2, the day when the restrictions came into place.

This had risen six-fold from the middle of August, when an average of six people were being diagnosed each day, and was up massively on the rolling average of just one infection a day in July.

But government statistics show the city’s infection curve had started to flatten just five days after the measures were imposed, showing the rolling average had hit 52 on September 7 and has barely risen since.

A similar pattern was shown in West Dunbartonshire

In East Renfrewshire, cases continued rising (blue line) after restrictions were imposed on September 2. But since then, cases have dropped back down again 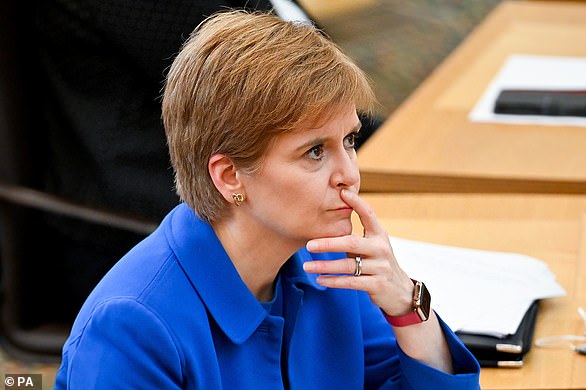 Figures from Public Health Scotland, the country’s health agency which updates Covid-19 data daily, shows a small uptick in cases over the past few days, with the rolling average standing at 64 on September 20.

Fresher data is not yet available because it is based on when samples were taken and not how many were actually registered on any given day. It can take several days for patients to get their results back.

This uptick in the past two weeks is in line with the rest of the UK, which has been blamed on children and adults returning to school and work, and appears to now be dipping again.

Sir Harry Burns, a professor of global public health at the University of Strathclyde, said data shows the lockdown measures in the west of Scotland are working.

Because of this, he supported Ms Sturgeon’s decision to impose a blanket ban on social mixing in households from today.

Around 1.7million Scots are now under tougher local restrictions — almost a third (31 per cent) of the country’s 5.4million population.

Aberdeen, home to 208,000, had previously been under a strict ‘lockdown’ from August 5 to August 23, which included the closure of pubs and restaurants, a household mixing ban and a travel restriction of five miles.

South Lanarkshire is starting to show improvements in Covid-19 cases (blue line), having been added to the list of places in Scotland hit with harder measures on September 12 (pictured)

Glasgow, West Dunbartonshire and East Renfrewshire were then slapped with new Covid-19 control measures on September 3.

It was expected to be in place for two weeks, however the Scottish Government has not yet lifted them.

Restrictions on visiting other households were applied because ‘transmission appears mainly to be happening inside people’s homes and between households, rather than in pubs and restaurants’, Ms Sturgeon said.

The daily average of cases in Glasgow at the time was 36.6. Cases continued to be diagnosed, reaching an average of 52 five days after the measures were announced.

But then, a week after the restrictions were put in places, cases levelled off at 44.6, suggesting the spike had been stopped in its tracks.

A similar pattern was shown in West Dunbartonshire, home to 89,000 people.

The average went from seven on September 2, to nine on September 6, before levelling off between five and seven cases a day.

It appears both Glasgow and West Dunbartonshire saw a sudden spike in cases again in mid-September. But data from the past two to three days shows this may be resolving.

In East Renfrewshire, around four people a day were testing positive for the coronavirus when the area was put under ‘local lockdown’.

This continued to rise sharply, doubling to eight by September 11. But since then, cases have dropped back down to four per day.

Although it is at the same level as when the measures were imposed, the data shows the outcome is still better than what could have been, had the virus been allowed to continue spreading.

On September 7, Ms Sturgeon ‘regrettably’ extended the measures to East Dunbartonshire and Renfrewshire, home to around 286,000 people, combined.

Both have seen a significant stalling in the spiralling Covid-19 cases.

South Lanarkshire is starting to show improvements, having been added to the list of places in Scotland hit with harder measures on September 12. But North Lanarkshire’s cases are still climbing.

Ms Sturgeon has now taken the Covid-19 response a step further in Scotland, proving to be moving more cautiously than neighboring England once again.

Scots are being barred from visiting other people in their own home – with some exemptions – officially from Friday. But people are being encouraged to comply from today. Ms Sturgeon also confirmed that Scotland would be following England in imposing a 10pm curfew on pubs and restaurants.

It came as part of a package of measures to try to stop coronavirus from ‘spiralling out of control’ in Scotland.

Sir Harry told BBC Scotland’s The Nine: ‘I can understand the reasons for the decisions the First Minister has made.

‘That’s basically because the data on the progress of the partial lockdown in the west of Scotland shows that it’s been effective, so she’s extending that to the rest of Scotland.

‘I don’t think we can do this too early, to be honest. I think we were a bit late going into the first lockdown and that may be why we had such significant impact. But I think we are seeing increasing daily cases.

‘Initially they highest number of cases were in the 20-40 year olds. We are now beginning to see cases increase in the over 60s and hospitalisations are increasing.

Ms Sturgeon accepted the ‘tough’ new restrictions felt like a ‘step backwards’, but they had not been introduced lightly.

She also defended her decision to introduce tougher coronavirus restrictions than in England.

The Scottish First Minister insisted the expert advice she received was that a curfew on pubs alone, as is the case in England, would not be sufficient to halt rising case numbers.

She refused to directly criticise UK Prime Minister Boris Johnson for failing to take action to prevent households from mixing indoors, as she has done.

But she did say she believed governments should ‘try to co-ordinate as much as possible across the UK’.

Speaking on ITV’s Good Morning Britain programme she said Scotland and the UK were in a ‘tough spot’.

Warning that ‘we are again at a tipping point with Covid’, Ms Sturgeon added: ‘If we don’t act now, urgently and decisively, then we might find Covid running out of control again.

‘The judgment I have made, and it is not an easy one, is if we take tough action now we might actually manage to be under these restrictions for a shorter period of time then we would end up being if we delayed that action.

‘So these are tough judgments but I think, given the loss of life we know that Covid can result in, the health damage that it does, we’ve got to be prepared at moments like this, people like me, to take tough decisions and to be prepared to do things even if they are unpopular, for the greater good.

‘I can only look at the situation in Scotland and I can only speak for the judgments I am making.

‘And my advisers say to me, yes, a curfew on pubs is certainly something that should be done and we have taken that decision, but in and of itself it is not going to be enough to arrest this increase in Covid cases and bring the R number down and bring the epidemic under control again.

‘That’s why I made the difficult judgment yesterday to go further.’