EXPRESS INFORMER > News & Politics > Sir Keir gets the all clear: No further action for Starmer over crash that left cyclist in hospital

Sir Keir gets the all clear! Labour leader Starmer faces no further action over car crash that left cyclist in hospital

Labour party leader Sir Keir Starmer will face no further action over his involvement in a car crash that left a cyclist in hospital.

The decision came after a thorough investigation, a spokesperson for London’s Metropolitan Police said, who added that ‘both parties have been informed’, the Sun reported.

A witness to the crash in Kentish Town, North London claimed that Starmer was performing a U-turn in the road when he collided with the cyclist on October 25.

Millionaire Starmer, 58, was asked by the unnamed cyclist, a rider for food delivery service Deliveroo, ‘How did you not see me?’ after being struck.

Labour party leader Sir Keir Starmer will face no further action over his involvement in a car crash that left a cyclist in hospital in October. Pictured: Sir Keir attending Prime Minister’s Questions on Wednesday

The Labour leader, who is the former Director of Public Prosecutions, was in his Toyota RAV4 just a mile from his home.

Starmer exchanged insurance information with the cyclist – who was described by an onlooker as ‘in a lot of pain’ on the ground – before leaving him in the care of paramedics, who took him to hospital with an injured arm.

Sir Keir had left the scene in north west London by the time two police cars arrived at around 12.20pm on the day.

Speaking at the time, witness Nicolas Janes, 39, said: ‘I was walking and there was a bang. A loud bang. I didn’t witness it directly but could hear the impact.

‘I saw what happened after. The cyclist was on the pavement, he was holding his arm. He looked like he was in a lot of pain.

‘There were people helping the cyclist. He just remained on the floor in pain. They looked concerned for him.’ 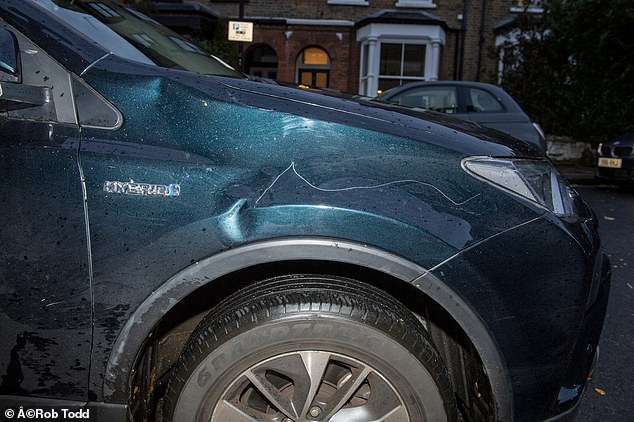 It later emerged that the cyclist involved in the crash was a driver for food delivery service Deliveroo and was riding an electric bicycle.

Sir Keir was on his way to a ‘private appointment’ with his tailor, Stitch & Clean, when the crash happened.

The haute couture clothing alterations service counts a number of celebrities among its clientele, including actor Jude Law and actresses Gillian Anderson and Billie Piper – as well as Labour heavyweights Ed and David Miliband.

The incident happened on Grafton Road in Kentish Town, close to a junction which outlaws right turns.

A right turn would have taken the former Director of Public Prosecutions directly to his appointment at the tailor.

A witness told the Daily Mail that Sir Keir instead performed a U-turn and the collision with the cyclist occurred when his car was ‘in the middle of the road’. 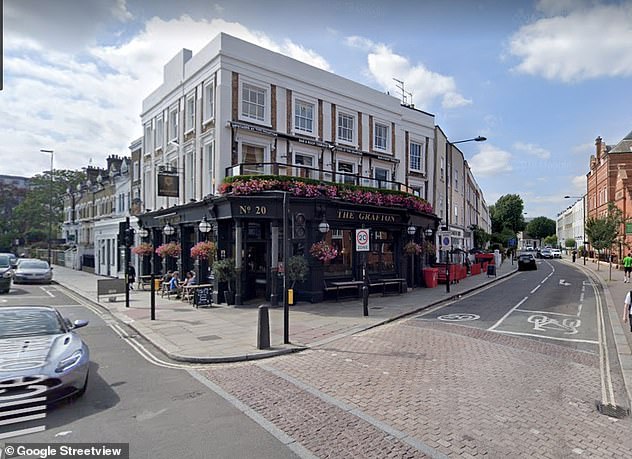 Pictured: The Grafton pub in Kentish Town where the incident occurred in October 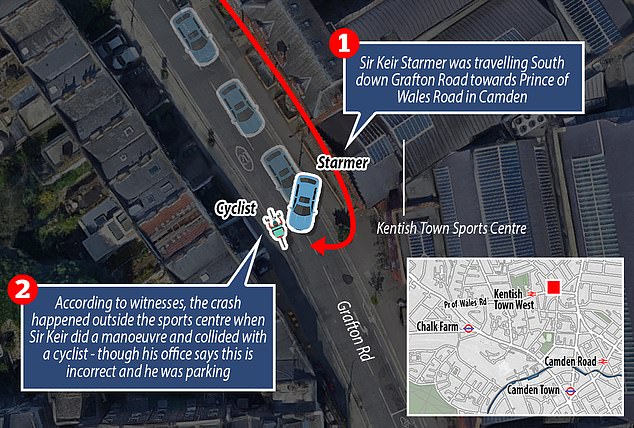 Sir Keir crashed into a cyclist while trying to perform a U-turn close to a busy junction with traffic lights, eyewitnesses said

However, a Labour Party source said Sir Keir was not performing a U-turn and was instead pulling over to park.

Another witness said: ‘The cyclist hit the car from the driver’s side. The side door was damaged and it was scuffed. When I went over to see what happened I heard the cyclist say, ‘How did you not see me?’

‘Sir Keir then reversed his car and parked up. He looked like he’d just come back from the gym and was wearing a black bomber jacket.’

He added: ‘I then went to finish taking the shopping inside and within ten minutes he was gone. The cyclist was nearly in tears, holding his left arm in pain. He looked angry and very annoyed.

‘In the end, traffic police, two police vans, three or four police cars and one ambulance turned up. If I was to do that I’d get in trouble. I can’t believe he had left so early.’