Sir Jim Ratcliffe’s new utilitarian 4X4 will be available to order from May and priced from £52,000 for the five-seat passenger model, it has been confirmed.

The eagerly anticipated Ineos Grenadier, the brainchild of richest man in Britain as the replacement for the previous-generation Land Rover Defender, will be available as both a passenger car and a commercial vehicle, with prices starting from £49,000 for the latter.

Customers are currently able to reserve one with a refundable fee of £450, though deposits of £2,500 for vehicle build slot will be taken from 18 May for those who want to make their interest in the SUV concrete.

First deliveries are expected to arrive by the end of the year, with production due to begin in July at the company’s new French factory, which Ratcliffe – a passionate Brexiteer – bought from Daimler in January 2021 having controversially ditched plans for a state-of-the-art vehicle plant in Wales.

Price confirmed: Sir Jim Ratcliffe’s new utilitarian 4X4 will be available to order from May and priced from £52,000 for the five-seat passenger model (pictured)

By February, more than 15,000 potential customers were said to have reserved one of the ‘back to basic’ 4X4s.

Ineos Automotive estimates that it will sell around 6,000 Grenadiers annual in the UK once assembly at the new Hambach factory – which resides on the French-German border – reaches full capacity.

It says sales to customers here will be skewed towards commercial variants over the five-door passenger SUV.

Performance figures for the new model have been clarified, with the workhorse 4X4 expected to rival the market’s most the latest pragmatic off-roaders, including Toyota’s Land Cruiser and the new Land Rover Defender ‘Hard Top’ – both favourites among farmers in particular.

Ineos Automotive’s offering for this market, called the Grenadier Utility Wagon, has just two seats, freeing-up the rear space for a load space of 2,088 litres. 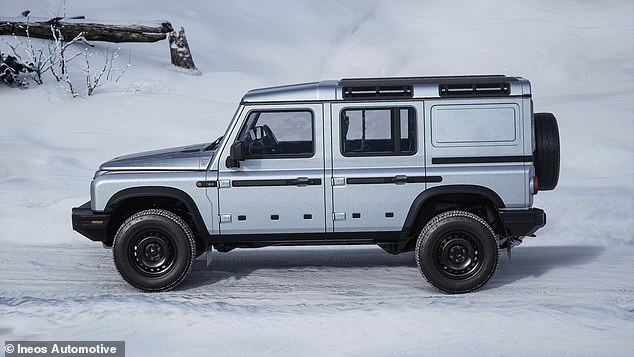 The eagerly anticipated Ineos Grenadier will be available as both a passenger car and a 2-seat ‘Utility Wagon’ commercial vehicle (pictured), with prices starting from £49,000 for the latter 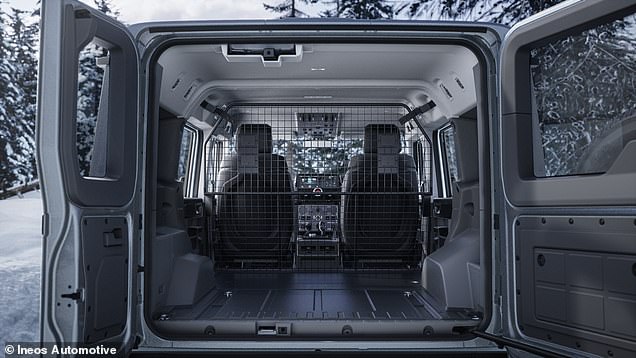 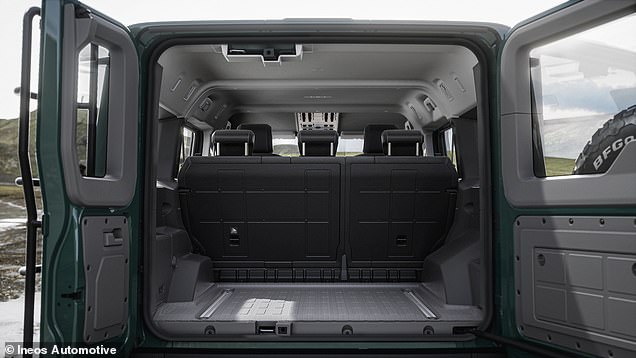 The 2-seat Grenadier Utility Wagon has load space of 2,088 litres (left). Adding a rear bench for the 5-seat passenger model (right) cuts it down to 1,152 litres – that’s 77 litres more than a Land Rover Defender 110 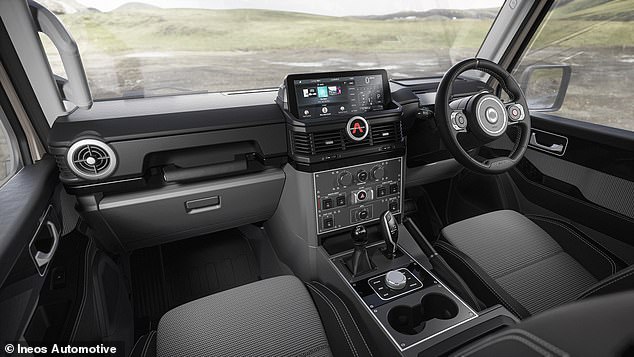 This is the interior of the new car, which is a mass of switches and control functions. It looks more like the cabin on a military vehicle than a family SUV

The passenger model, which adds a bench in the rear to make it a five-seater and costs an extra £3,000, has the same towing and winching capabilities.

However, the additional seating means the boot space is cut to 1,152 litres. That’s 77 litres more than its biggest rival – the five-door Land Rover Defender 110, which costs a premium on the Ineos, starting from £59,835 in the UK.

The all-new British car brand also confirmed today that it will have two special edition versions of the Grenadier from launch.

These have been developed in partnership with Ineos-owned clothing brand Belstaff, with the nameplates based on the iconic fashion label’s stylish jackets.

Both the Trialmaster and Fieldmaster will be priced from £59,000 and come with additional equipment as standard, including electrically-adjustable heated mirrors, a raised air intake, auxiliary battery, front park assist and a reversing camera. 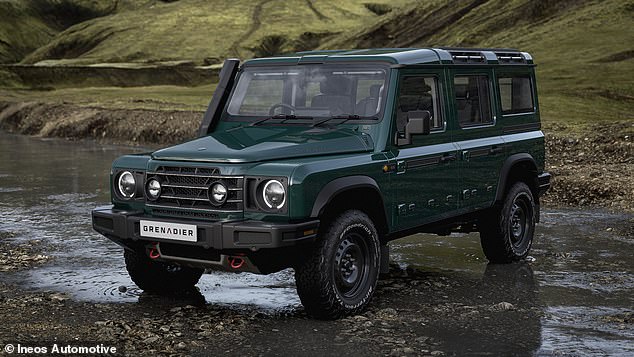 The Trialmaster Edition (pictured) is one of two special edition versions of the Grenadier sold from launch, both of which are named after Belstaff fashion jackets. Ratcliffe also owns the clothing label 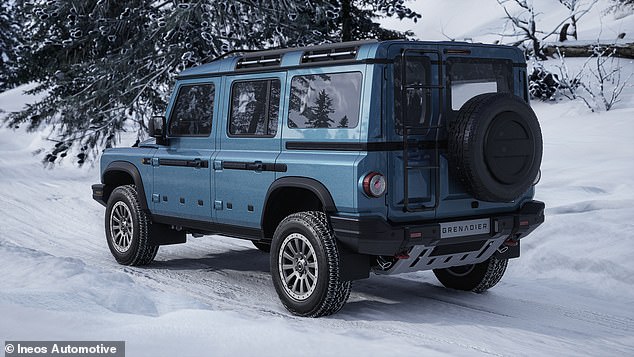 Both the Trialmaster and Fieldmaster (pictured) editions will be priced from £59,000 and come with additional equipment as standard, including electrically-adjustable heated mirrors, a raised air intake, auxiliary battery, front park assist and a reversing camera 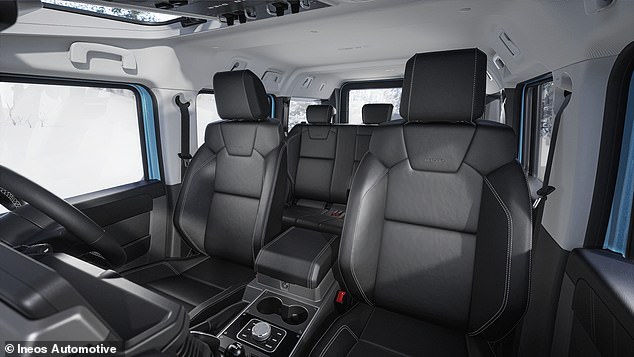 ‘As a new vehicle manufacturer, opening our first order books is a significant milestone and we know thousands of customers have been patiently waiting for that day,’ said Dirk Heilmann, the car brand’s CEO

‘Now we invite buyers to join us on the next stage of our journey and look forward to seeing how they spec their vehicles when finalising their orders.’

So far, it has announced a network of 24 franchised dealers across the country, which will be based in existing Audi, BMW, Ferrari and Ford dealerships, including Jardine Ferrari in Colchester and Sevenoaks, Day’s Audi in Neath, Halliwell Jones BMW in Chester and Harwoods Ford in Portsmouth.

Another 10 UK retailers will make up the UK sales force.

All Grenadiers will be available with BMW-developed 3.0-litre straight-six-cylinder, twin-turbo diesel and petrol engines, boasting 249 horsepower and 285 horsepower respectively.

Both will be mated to the German brand’s slick-shifting eight-speed automatic gearbox. 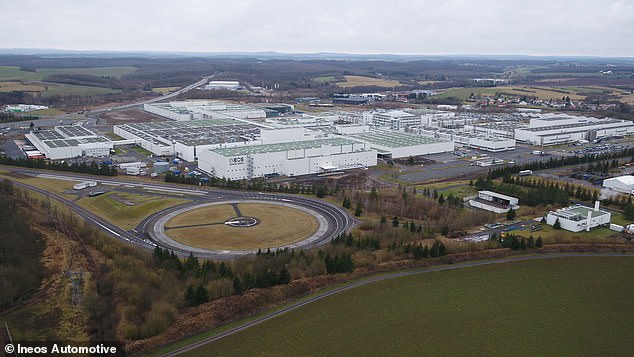 Sir Jim’s automotive home: This is the Hambach factory bought by British billionaire Sir Jim Ratcliffe as the new production site of his first vehicle, the Ineos Automotive Grenadier 4X4 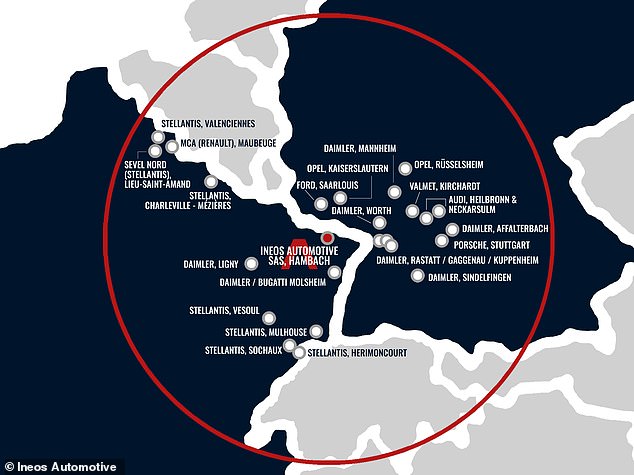 The new Grenadier vehicles will be built by British petro-chemical billionaire Ratcliffe at his new state of the art factory on the Franco-German border in Hambach, which is a hub of automotive production and provides open supply lines in Europe

There was huge disappointment in Britain when Ratcliffe chose the ready-made Hambach factory ahead of publicly-shared plans for a UK factory on the site of the former Ford plant at Bridgend, which would have provided a huge economic and job boost for the region.

This was especially the case after the billionaire, who has topped the British rich list, had been a vocal Brexit supporter.

Yet, bosses said the economic argument for choosing the Hambach plant proved irresistible and impossible to ignore, especially in terms of providing delay-free part supply channels.

Mercedes-Benz had invested €470million in an all-new state of the art production line to build an electric 4X4 at Hambach in 2019, which it subsequently decided to switch elsewhere. 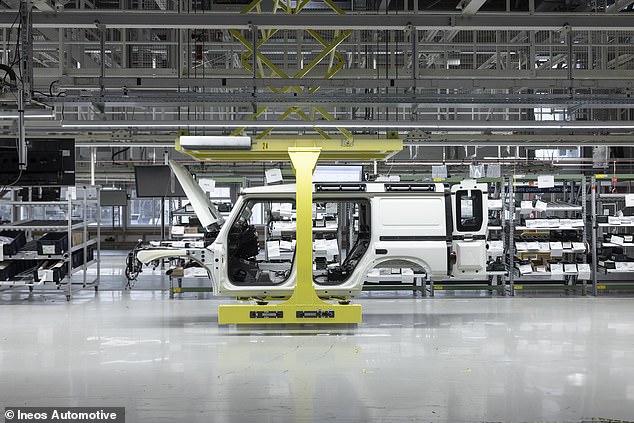 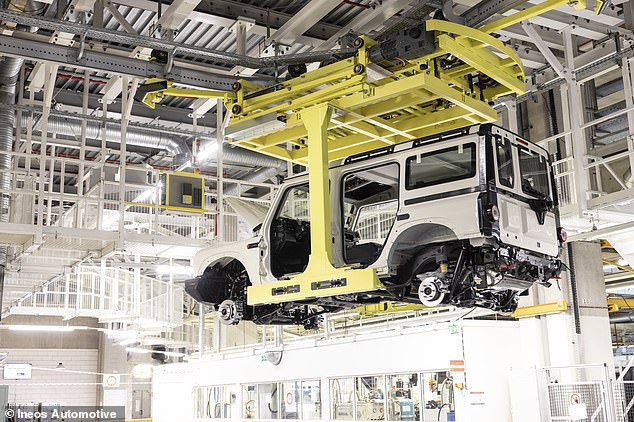 The availability of the Daimler site, which had recently been converted to handle the production of large SUVs, was an economic no-brainer for the new auto company 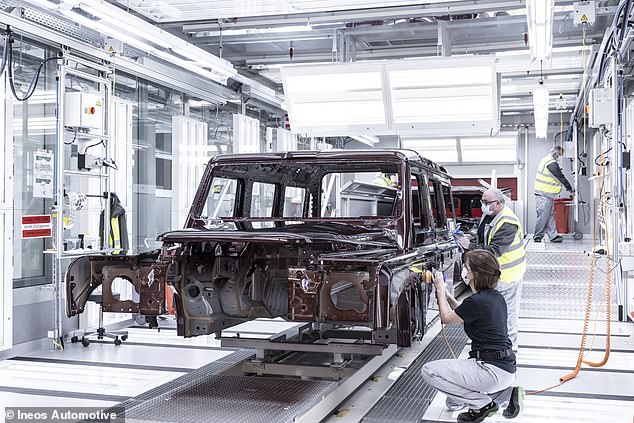 Ineos stepped in and snapped up the Hambach factory for an undisclosed sum – but believed to be a bargain price – and has invested an additional €50million over the last 12 months to adapt it for Grenadier production, using the existing highly skilled 1,000-strong former Mercedes-Benz workforce.

Part of the deal also included an agreement for Smart – also owned by Daimler – models to continue being built at the site under contract.

The factory has more than 250 robots for steel and aluminium welding and other functions.

Ineos Automotive’s headquarters are still based on the UK, at its London’s Knightsbridge HQ, yet its operational base is in Stuttgart, Germany, and its engineering partner is Austrian specialists, Magna Steyer.

Will it fit in my garage? Ineos Automotive Grenadier 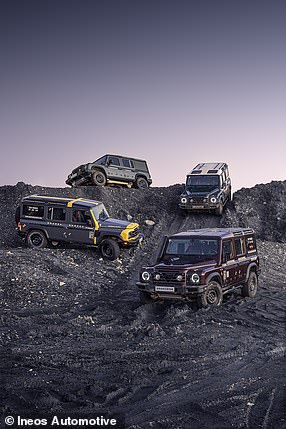 In the pipeline: Hydrogen fuel-cell electric, and battery-electric prototypes