Sir Frank Williams will no longer be involved in Formula One after it was announced that one of the sport’s best-known families are stepping aside.

Claire Williams, who has acted as the de facto boss of the British team since 2013, revealed she will be departing her role as deputy team principal.

Claire Williams has been acting as deputy team principal to her father Sir Frank since 2013. They are both pictured in discussion during the British Grand Prix in 2019

The Williams name will leave the sport following this weekend’s Italian Grand Prix. The identity of the team’s replacements are yet to be confirmed.

Claire Williams said: ‘With the future of the team now secured, this feels like the appropriate time for us to step away from the sport.

‘We believe now is the right time to hand over the reins and give the new owners the opportunity to take the team into the future. 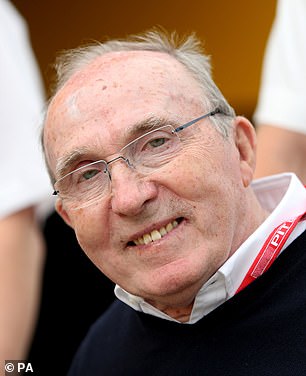 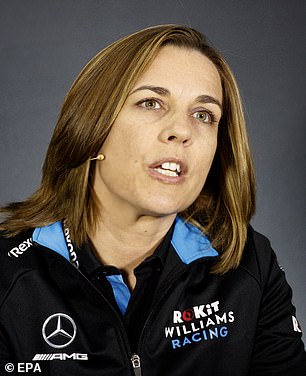 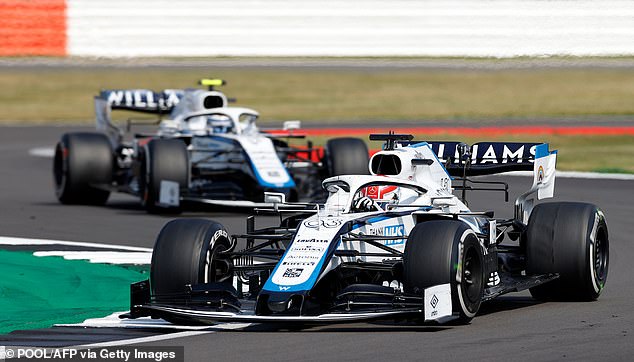 ‘We have been in this sport for more than four decades. We are incredibly proud of our track record and the legacy we leave behind.

‘We have always been in it for the love of it, for the pure pleasure of going motor racing, so this is not a decision that we have taken lightly but after much reflection and as a family. 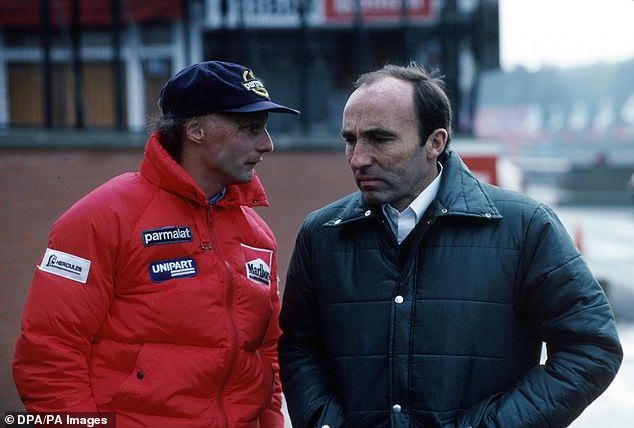 Williams rose to success during the 1980s, with Sir Frank pictured alongside Niki Lauda in 1982 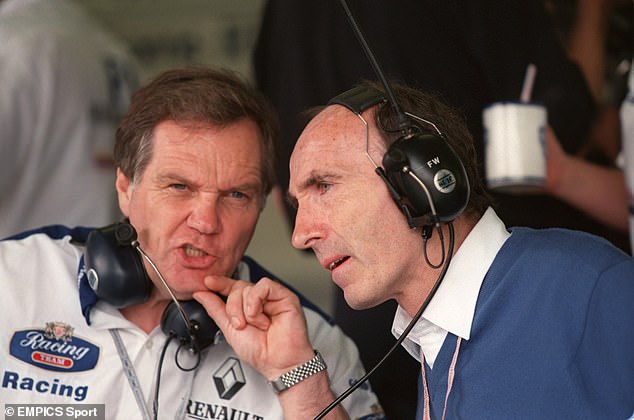 Sir Frank Williams, 78, founded the team in 1977 but has been competing in F1 since 1969 when he purchased a Brabham chassis to run his drivers.

Williams enjoyed a remarkable rise in the sport, with the team winning the world championship with Alan Jones in 1980 as a team led by Sir Frank and his technical director Patrick Head started to gain prominence in the sport.

By 1986, he had arguably the best team on the grid with heavyweights Nigel Mansell and Nelson Piquet driving for him, even if their rivalry cost them the world championship. 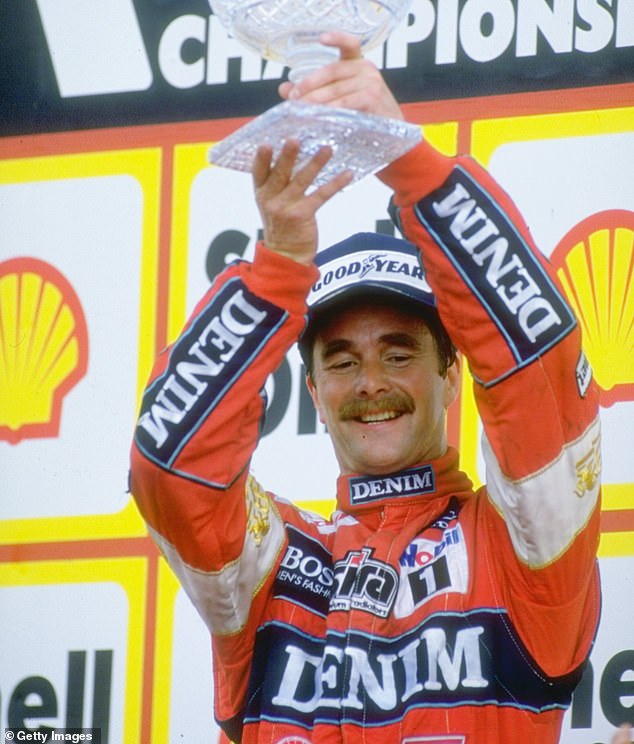 Despite a car accident in the same year that saw him wheelchair bound, Williams continued to run the team from the front and Williams’ dominance continued in 1987 when Piquet strolled to title success.

While the 1980s saw them become an established front running team with title wins for Jones, Keke Rosberg in 1982 and Piquet, the 1990s would  heard a new era of dominance.

Every top driver wanted to drive for Williams and it brought title success for Mansell in 1992 and Prost in 1993, while Damon Hill and Jacques Villeneuve also tasted championship glory in 1996 and 1997 respectively.

The legendary Ayrton Senna also landed a highly sought drive with the team in 1994 but was tragically killed at the San Marino GP just three races into his spell with the team.

Williams remained competitive into the early 2000s as Michael Scumacher and Ferrari started to wrestle control but gradually faded away following the 2004 when Juan Pablo Montoya took the team’s penultimate F1 victory.

The team have won just one race since Montoya’s Brazilian GP success, when Pastor Maldonado took a shock win at the 2012 Spanish Grand Prix.

A year later Sir Frank passed the day-to-day running of the team over to his daughter Claire.

They have finished bottom of the constructors’ championship for the past two seasons, and are without a point in 2020 with the team having struggled to compete financially with their rivals. 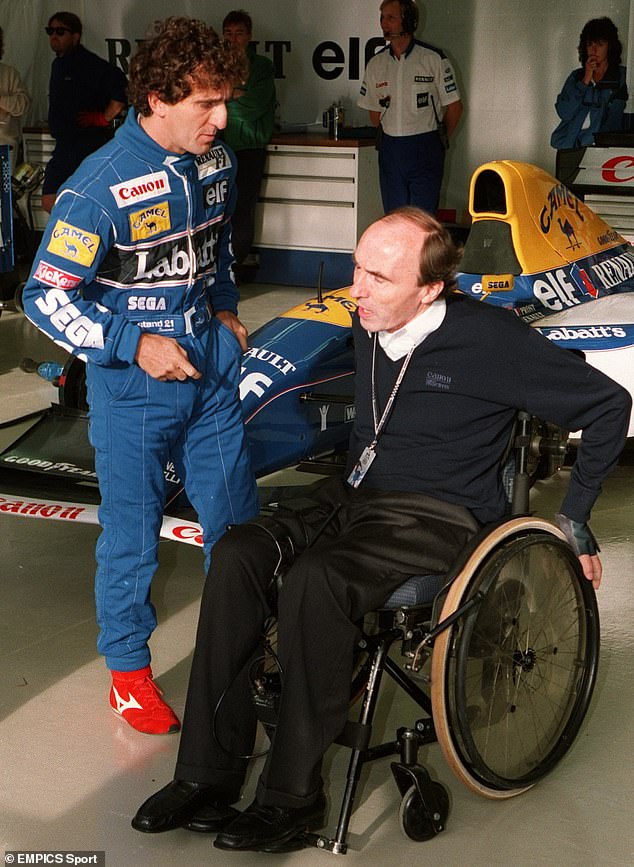 Williams dominated the sport throughout much of the 1990s, with star drivers including Alain Prost, who won the title with team in 1993, desperate to drive for Sir Frank 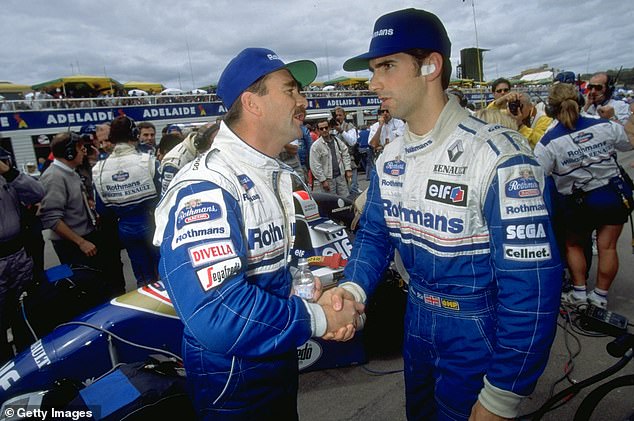 The 1990s brought world championships at Williams for British duo Mansell (left) in 1992 and Damon Hill (right) in 1996. They are pictured before the 1994 Australian Grand Prix 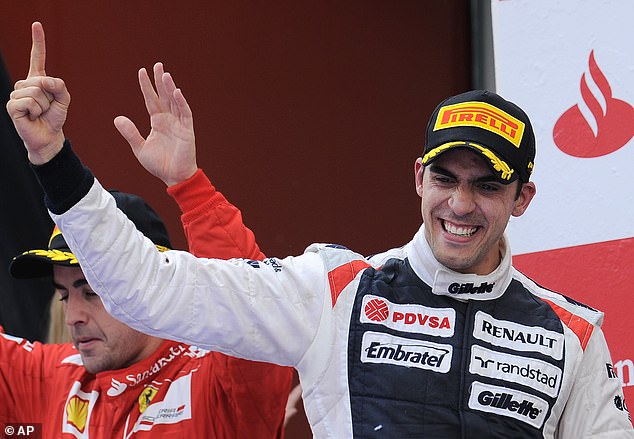 But Williams have fallen on hard times in recent years and have only won one race since 2004, with Pastor Maldonado tasting a rare victory at the 2012 Spanish Grand Prix (above)

Claire Williams added: ‘On behalf of Frank and the Williams family, I would like to say how incredibly grateful and humbled we are for the support we have enjoyed over the years, from our friends in the paddock to the many fans around the world.

‘But mostly, we would like to thank our team. People who have worked at Williams in the past and present.

‘They are the true warriors of this team and have made it what it is and we wish them well. Formula One has been our life for so long and now it’s time for a new chapter in our lives to begin.’