A terrifying simulation shows how a nuclear strike from Russia could trigger a war that kills 34 million people in just five hours.

Known as ‘Plan A’, the four-minute animation aims to highlight the ‘potentially catastrophic’ consequences of conflict between Russia and NATO countries.

It was developed by Princeton University researchers associated with the Program on Science & Global Security (SGS), and was originally released in 2017.

However, the Ukraine war has reignited discussions around the prospect of nuclear war, and renewed interest in models like this one.

Dr Alex Glaser, one the creators of Plan A, told Newsweek: ‘As far as one can tell, this is the most serious crisis with a potential nuclear dimension involving Russia and the United States/NATO since the end of the Cold War, even if the risk of a nuclear war is still considered ‘small’—as many analysts would argue.

HOW WOULD THE WAR PROGRESS?

The simulation begins with a conventional, non-nuclear conflict.

Russia fires a nuclear warning shot from a base on the Black Sea, with the aim of halting a US–NATO advance.

After this, the conflict escalates thus:

Each side strives to take out the other’s offensive nuclear capacity.

Both sides fire 5–10 nukes at the opposition’s 30 most populated cities or economic centres.

This causes 85.3 million deaths and injuries in 45 minutes.

The model – based on realistic data on nuclear force postures, targets and causality estimates – predicts that 34.1 million people would die within hours.

The catastrophic conflict would leave another 55.9 million injured — figures which do not include subsequent deaths from nuclear fallout and other effects.

Nuclear war simulators may seem scary, but they can be used by governments to develop contingency plans, and educate the public on how to survive an attack.

This simulation begins within the context of a conventional, non-nuclear conflict.

Russia fires a warning shot from a base near Kaliningrad, on the Black Sea, to stop a US-NATO advancement, before they retaliate with a single, tactical air strike.

Russia then sends 300 warhead explosives, carried either by aircraft or short-range missiles, towards NATO bases and advancing troops in Europe.

The international military alliance would then respond with around 180 aircraft-borne nukes.

At this stage, casualties would be expected to reach around 2.6 million people within a three-hour period and Europe is left essentially destroyed.

Following this, NATO acts from the continental US and nuclear submarine fleets, launching a strategic nuclear strike of around 600 warheads.

Before this strike hits and its weapons systems are destroyed, Russia launches nukes from its complement of missile silos, submarines and mobile launch pads.

The model projects 3.4 million casualties from this phase of the war, which would last only 45 minutes.

In the final phase of the conflict, both sides take aim at each other’s 30 most populated cities and economic centres — deploying 5 to 10 nukes for each one — to attempt to inhibit each side’s recovery from the war.

Such a move, the researchers conclude, would see another 85.3 million casualties within the space of 45 minutes. 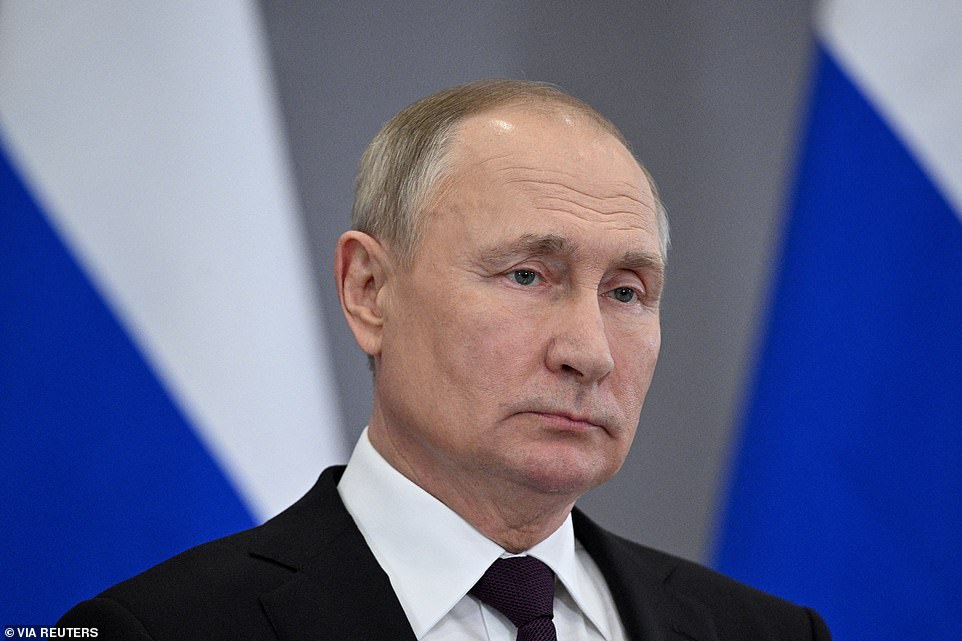 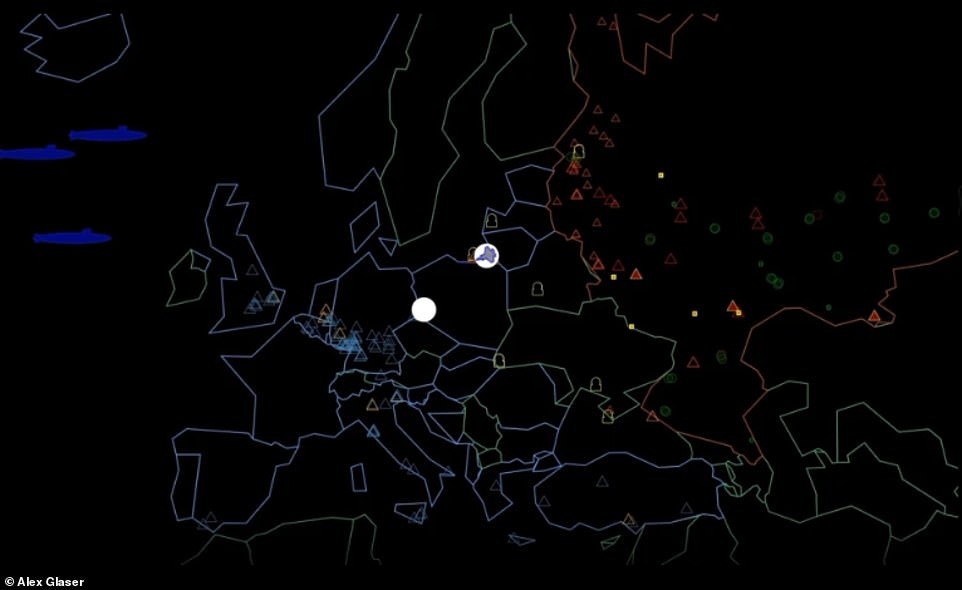 The model — based on realistic data on nuclear force postures, targets and causality estimates — predicts that 34.1 million people would die within a matter of hours 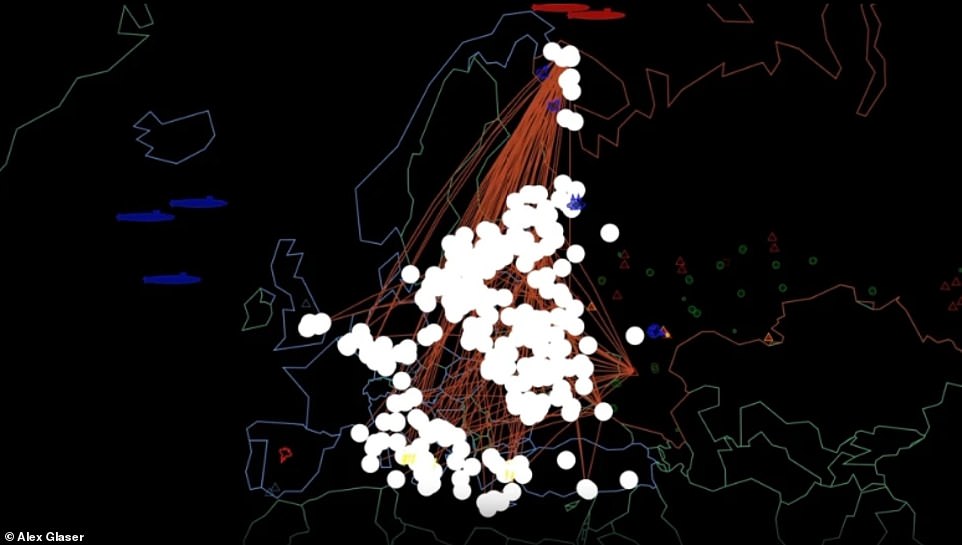 The catastrophic conflict would leave another 55.9 million injured — figures which do not include subsequent deaths from nuclear fallout and other effects

WHAT IS THE IMPACT OF A NUCLEAR BOMB?

A nuke’s impact would depend on factors like the weather, weapon design and the blast zone’s nature.

About 35 per cent of the bomb’s energy would be released as heat.

Flash blindness from a 1 megaton nuke could be triggered up to 13 miles away on a clear day and 50 on a clear night.

Those within a 5-mile-radius would receive third degree burns.

The blast of air pressure generated would destroy nearby buildings.

Winds of up to 158 mph would affect people up to 3.7 miles away, causing objects to fly around.

Many countries in the model appear to escape being the direct target of a nuke, such as those in the southern hemisphere, and Scotland.

However, the effects of the nuclear fallout, collapsing medical systems and longer-term impacts on the Earth’s climate, population and food production would have wide-ranging effects.

The computer simulation is based on independent assessments of current US and Russian force postures, nuclear war plans, and nuclear weapons targets.

The team also used publicly available data of currently deployed nuclear weapons, potential targets for the weapons and the order they would likely be detonated.

An online tool called NUKEMAP was used to determine the immediate fatalities and casualties that would occur in each phase of the conflict.

It was originally exhibited at Princeton’s Bernstein Gallery in 2017, but was made available to the public in 2019.

While it gained some interest initially, the video remained relatively under the radar until February this year, when Russia launched a full-scale invasion of Ukraine.

Vladimir Putin made remarks in April alluding to using nuclear weapons if ‘threatened’ by countries ‘interfering’ in Ukraine.

The Russian president said: ‘If someone intends to interfere in what is going on from the outside they must know that constitutes an unacceptable strategic threat to Russia. 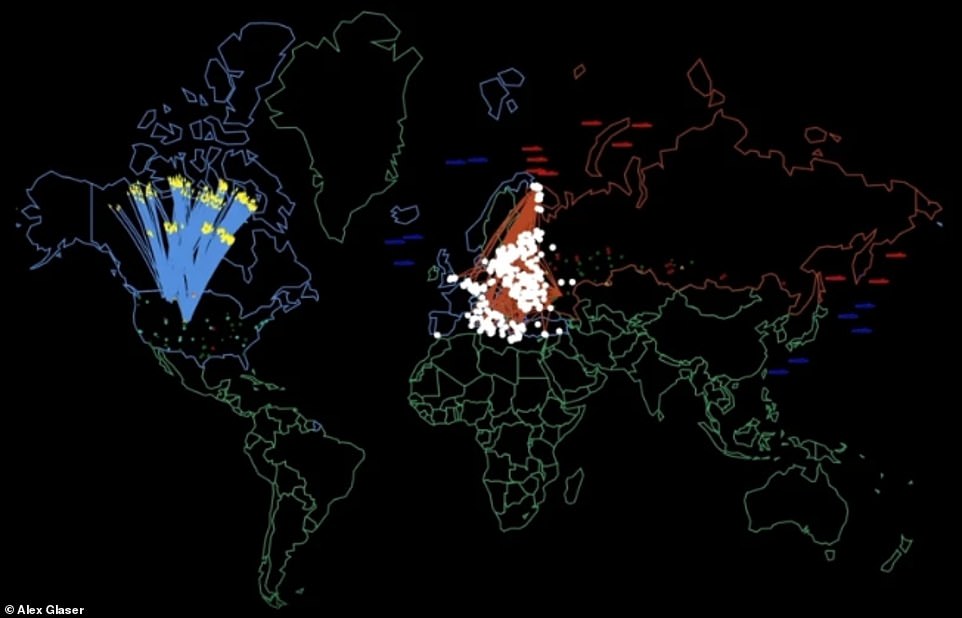 ‘They must know that our response to counter strikes will be lightning fast. Fast.

‘We have all the weapons we need for this. No one else can brag about these weapons, and we won’t brag about them. But we will use them.’

As a result of these references to nuclear attacks, the ‘Plan A’ video has now gained over four million views.

German engineer Dr Ivan Stepanov has also developed his own nuclear war simulator program, which he has used to predict the outcome of a Russian strike.

His model is called Nuclear War Simulator and allows users to simulate ‘realistic large-scale scenarios between major powers with thousands of warheads’.

Dr Stepanov was born in the city of Semipalatinsk, Kazakhstan, which is less than 100 miles from a site where Soviet authorities once tested most of their nuclear weapons. 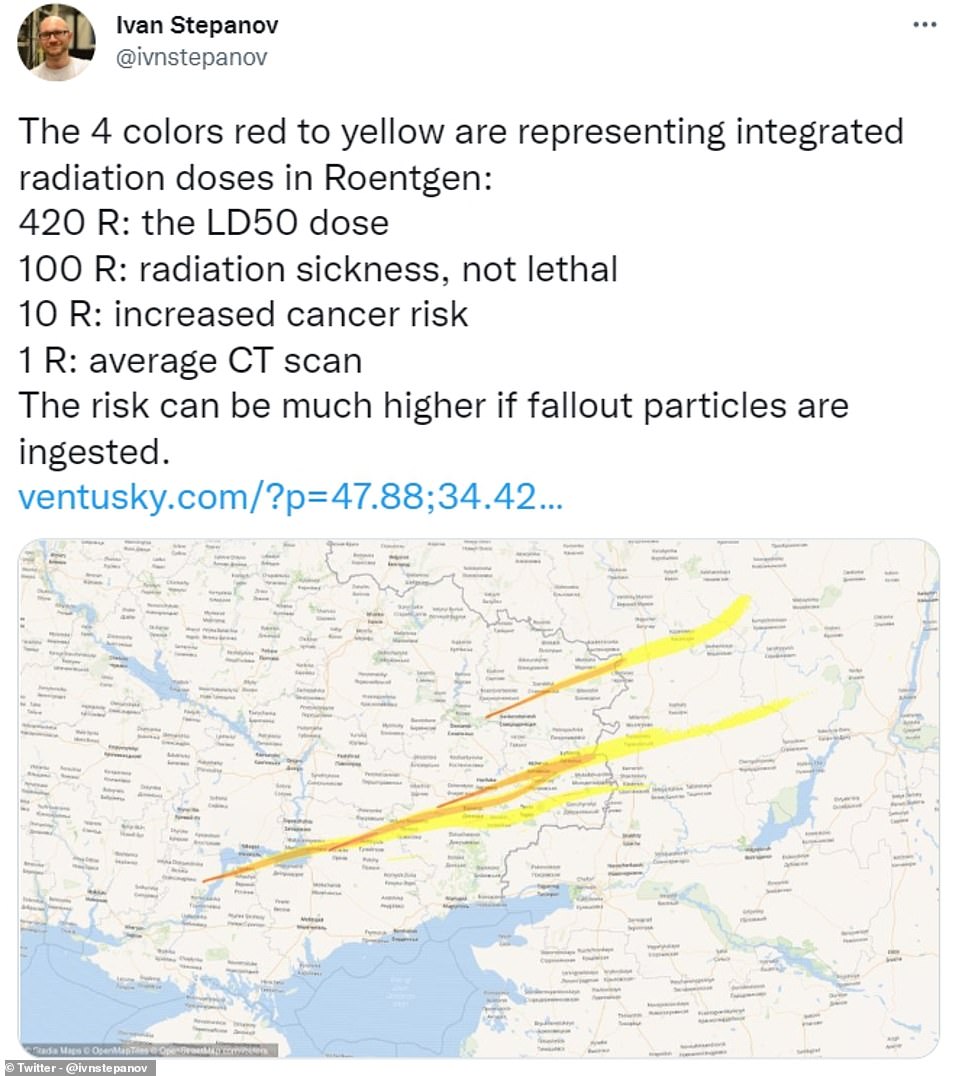 German engineer Dr Ivan Stepanov has also developed his own nuclear war simulator program, that he has used to predict the outcome of a Russian strike

In a series of tweets, he reveals what consequences the Nuclear War Simulator predicts of a Russian nuclear attack on Ukraine.

He says that they will differ depending on the wind conditions, but that ‘it is very likely that the fallout will be transported in the direction of Russia’.

‘However, only small amounts will be deposited there,’ the engineer tweeted.

‘It is possible to find wind conditions carrying the fallout in the western direction.

‘Still, the wind is usually slow and it is unlikely that significant fallout will reach NATO countries.’

He goes on to say that predicting nuclear fallout is ‘very hard’, and that it depends significantly on the wind and rain.

HOW TO SURVIVE A NUCLEAR BOMB

Experts have detailed a number of tips to improve your chances of survival in the event of a nuclear disaster, including:

When a nuclear bomb goes off, it sends out radiation that can ruin your mobile phone and laptop, so preparing battery-powered radios for communication is wise.

For the blast, it is important to get as much concrete between you and the blast as possible.

For the fall-out it’s important to have thick walls and a thick roof, he says, and in a house it is a good idea to blockade all the windows. 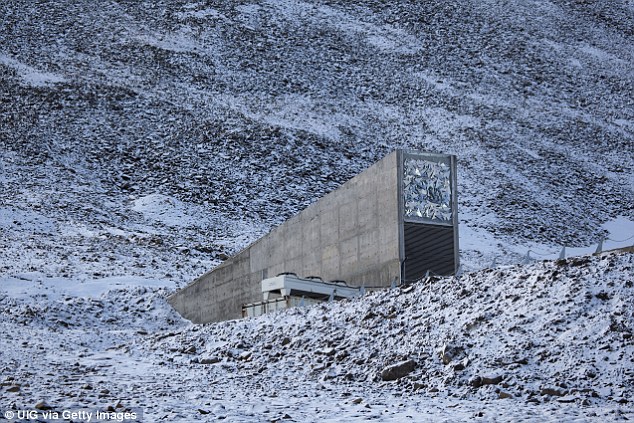 Scientists have devised the Svalbard Global Seed Vault (pictured) as a way to protect the world’s food supply in the event of a global disaster. It’s located in Norway

But if you are outside and know the blast is coming, you might have time to get to a better shelter.

First you should get on the ground with your hands behind your head and brace yourself for the blast.

Never look at the blast, because it can cause you to go blind temporarily.

The, after the blast, you have 30 minutes to get to the best place.

Once you get inside remove your clothes and clean yourself straight away and blow your nose, to stop the radioactive materials from spreading, and do not use conditioner.

If you cannot have a shower, wipe yourself with a wet cloth.