The cost of living crisis is eating into household finances up and down the country. While some higher costs such as utility bills are unavoidable, others can be cut by boxing clever.

Last week, Toby Walne was tasked with a mission: to reduce his weekly grocery bill. Aware that many food stores offer special discounts, he sought to find out how easy they were to obtain, when to get the best deals, any tricks he could employ to get bargains, and from which retailer.

He also used his phone to see whether food apps which offer to source cheap or free food are as good as they claim to be. It didn’t all go to plan, but the result was the purchase of food worth around £40 for just over £14.

What a catch: Toby Walne with a selection of the discounted food that he found while shopping at Waitrose

8AM: NOT THE BEST POSSIBLE START

You have to get up early in the morning to take advantage of grocery discounts using food saving apps.

Free shopping app TooGoodToGo is one of the most popular – with ‘magic bag’ sales of goodies worth £10 or more selling for less than half price. Coffee shops Caffe Nero and Starbucks are among those signed up to the app offers, as is bakery Greggs and the Spar.

Logging on just after 8am, I had already missed out on some deals that had come up the night before. But I was still able to buy a £4.50 ‘magic bag’ from Starbucks in Bishop’s Stortford, Hertfordshire, that could be picked up after 6pm. I paid by credit card. The bag, it said, offered ‘a selection of delicious wraps, paninis, crunchy salads, sweet treats, yogurts, juices, healthy snacks and your favourite pastry items’.

I also bought a £3.09 ‘magic bag’ from convenience store Spar, again worth at least £10. This said I could get anything from cakes and pastries through to fish and meat. I licked my lips in anticipation. I was told I would have to wait until after 7pm to pick up my items.

Too good to be true? Sadly, a big yes. Just after 3pm, I received a text from TooGoodToGo about my Starbucks magic bag. By magic, it had disappeared: ‘Hi, it turns out the store doesn’t have any food to rescue today, so we have refunded your payment!’

Three hours later, I got the same text about my Spar magic bag. Gone in a puff of smoke.

Perhaps other shopping apps would get me spending and saving at the same time. App Olio offered free food from fellow subscribers who might otherwise throw it away. But it was slim pickings where I live. Within half a dozen miles of my home, I could only find free baby food (no thanks) and a jar of mincemeat (as unappealing as the baby food).

Finally, I gave food discount app Karma a whirl. Bizarrely, it thought I was in Stockholm rather than Bishop’s Stortford. Karma offered a ‘vegoboxen’ for 92 krona (£7.50), a third off its normal price. A mix of vegetarian meat balls, tomatoes and other delights.

Sadly, I would have to travel to Sweden to pick up my vegetable box. Not feasible on so many levels: cost and the likelihood of my flights being cancelled. An inauspicious start.

MIDDAY: A SUPERMARKET SWEEP FOR DISCOUNTS

Having failed to get any discounted food via these apps, I decided to hit the road to see if I could hunt down any in-store bargains.

Supermarkets reduce the price of certain items during the day – usually because they are perishable and on their sell-by date.

At lunchtime in Bishop’s Stortford, all I could find that represented a bargain was a pizza, reduced from £3.75 to £2.99 at Sainsbury’s. It was marked with a yellow sticker, with a sell-by date of the same day.

I snapped up the pizza, comprising of Italian ham, Napoli salami and Spanish chorizo – all placed on hand stretched sourdough. Big enough for more than one serving.

Staff at Marks & Spencer said they offered yellow sticker food at the start of the day and at 2pm – and sometimes later.

There was nothing on offer when I visited. There were no magic bags on display at Spar, but it had one item reduced for quick sale – biscuits with two days to go before they reached their sell-by date. Normally costing £1.25, they were available for £1. Gripped by bargain fever – buying for the sake of a discount rather than necessity – I handed over my pound coin.

Speaking to staff at a number of stores, It became clear the best time to hunt down yellow stickers would be 6pm.

I consider shopping at Waitrose a luxury. So it came as a pleasant surprise to discover that it is generous in its use of yellow stickers, indicating reduced prices.

There were bargains to be had at the back of the vegetables aisle – as well as near the front of the shop’s meat section.

I picked up a £2.60 box of strawberries for £1.25. Although they had hit their sell-by date, they looked fresh – and as I discovered later that night, they tasted delicious. Manna from heaven.

A fancy chickpeas, spinach and quinoa dish was reduced from £2 to 75 pence. A dish that normally would impress Gwyneth Paltrow acolytes, but this time drew me in. The basis for three meals.

I also bought some rocket salad for 99p (normally costing £2), two shiny red romano peppers for 95p instead of £2.10, and two large cod fish cakes for £1.35 (retail price of £4.50). Enough for two good meals, at least. I had less luck at the nearby Sainsbury’s supermarket. Its ‘last chance to buy’ section had been stripped bare of most items.

All that was left was a rather sad looking £2.25 fruit pot of apple, mango and strawberry priced at 25p. Bags of mixed vegetables (perfect for a stir fry) and lettuce were both available for just 10 pence, down from £1. I snapped them up before driving to an out-of-town Tesco a mile away. 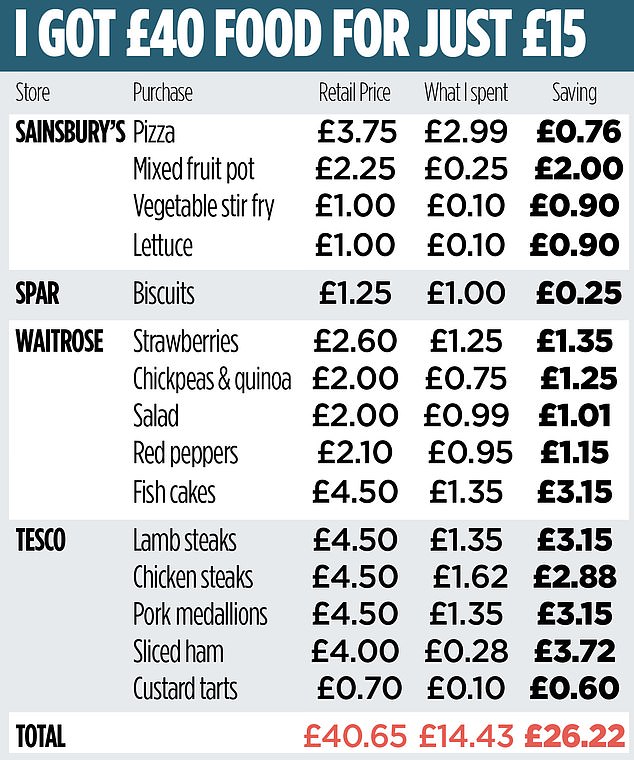 7PM: ‘CS’ TIME… FOR THE BIGGEST SAVINGS OF ALL

I timed my arrival at Tesco to perfection. Half a dozen eager shoppers were eagerly waiting for the arrival of end-of-day bargains. Among them was 45-year-old James Knights. He said: ‘In a moment, staff will come along with the store’s final bargains for the day. You know they are final because they have a ‘CS’ sticker on them. It stands for ‘colleague shops’, which means nothing to me other than it represents the cheapest price Tesco will offer these goods at. It’s when people like me pounce.’

A £4 packet of 20 breaded ham slices was a snip at 28p (retail price, £4) and would provide enough filling for a week’s worth of lunchtime sandwiches.

As far as treats were concerned, a packet of two custard tarts were bought for 10p, down from 70p. There was a real sense of camaraderie as the group shared with me their food buying tips. The most popular was to go for food that could be frozen – as it is being sold on its final best-buy-date. Being able to put it straight into a freezer extends its lifespan to when you want to turn it into a meal. Another was to get on friendly terms with supermarket staff who can advise when the best times to turn up might be – as yellow sticker times can vary between stores.

I was also told not to be too picky or rely on just one store – as it can be a lucky dip on what is available. The menu choice grows by visiting more shops.

But Josephine Hall, 58, said bargain hunting did sometimes turn nasty. ‘People snatch groceries out of your hand,’ she said. ‘I have seen tears shed.’

I SAVED MONEY…AND HELPED THE PLANET

So if you decide to go bargain hunting for food, may I finish with a few golden tips.

One, leave your search for discounted food until late in the day (around six o’clock).

Two, don’t go with a shopping list. Be totally flexible about what you are prepared to buy. It might mean an overload of meat one night, salad the next.

Three, ensure you have some space in your freezer to accommodate food on its sell-by-date.

And finally, don’t feel ashamed about what you are doing. After all, you’re reducing food waste and in some small way helping save the planet.