Simon Cowell and his partner Lauren Silverman put on a loved-up display on Thursday when they strolled hand-in-hand through London following a double date night at hotspot Harry’s Bar with Richard Desmond and Joy Canfield.

Simon, 61, looked typically dapper in a black suit and white shirt while Lauren, 43, wowed in a patterned dress teamed with open-toe black heels.

Socialite Lauren – who shares seven-year-old son Eric with the America’s Got Talent judge – wore her glossy brown hair loose and kept the cold at bay with a chic cardigan.

Date night: Simon Cowell, 61, and his partner Lauren Silverman, 43, put on a loved-up display on Thursday when they strolled hand-in-hand through London

She toted her belongings in a stylish black handbag and wore a bracelet on both her right wrist and left ankle.

The doting mother posed for photographs alongside media mogul Richard, 69, and his wife Joy, who looked glamorous in a plunging floral dress and heels.

Simon and Lauren hopped into a cab after saying their goodbyes.

It comes after Simon reportedly pulled out of jetting to Israel to take part in their version of The X Factor due to the violence in Gaza. 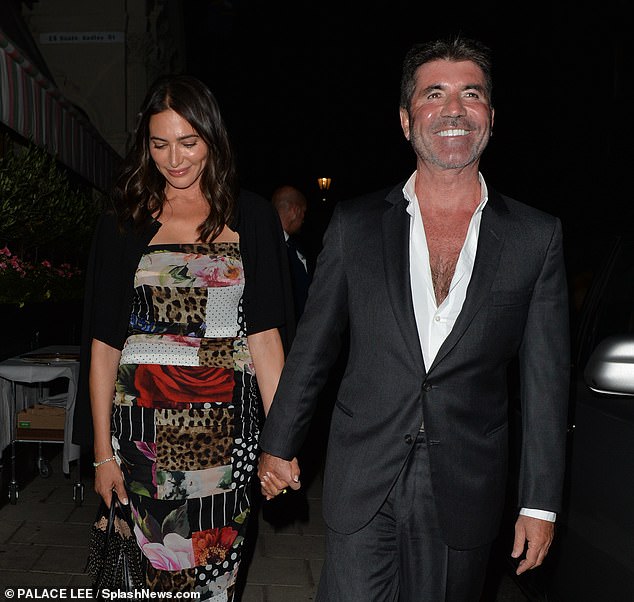 According to Jewish News, the music industry titan pulled out of sitting on the panel for The X Factor Israel after having ‘legitimate concerns’ about travelling there.

The current eruption of violence in the Gaza Strip began last month in Jerusalem, where heavy-handed Israeli police tactics during Ramadan and the threatened eviction of dozens of Palestinian families by Jewish settlers ignited protests and clashes with police.

The X Factor’s production company, Reshet, said that Simon had pulled out ‘for his own reasons’ and that he was ‘bitterly disappointed’ by the decision. 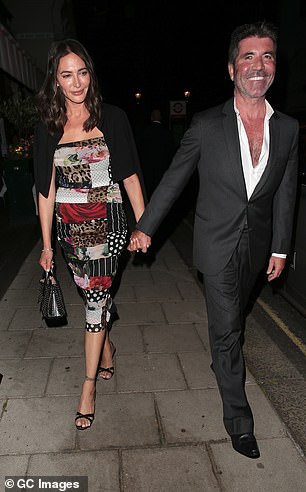 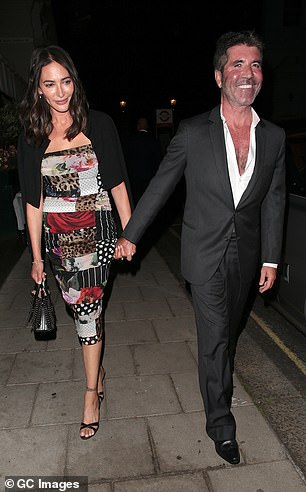 Parents’ night out: Lauren – who shares seven-year-old son Eric with the America’s Got Talent judge – wore her glossy brown hair loose and kept the cold at bay with a chic cardigan 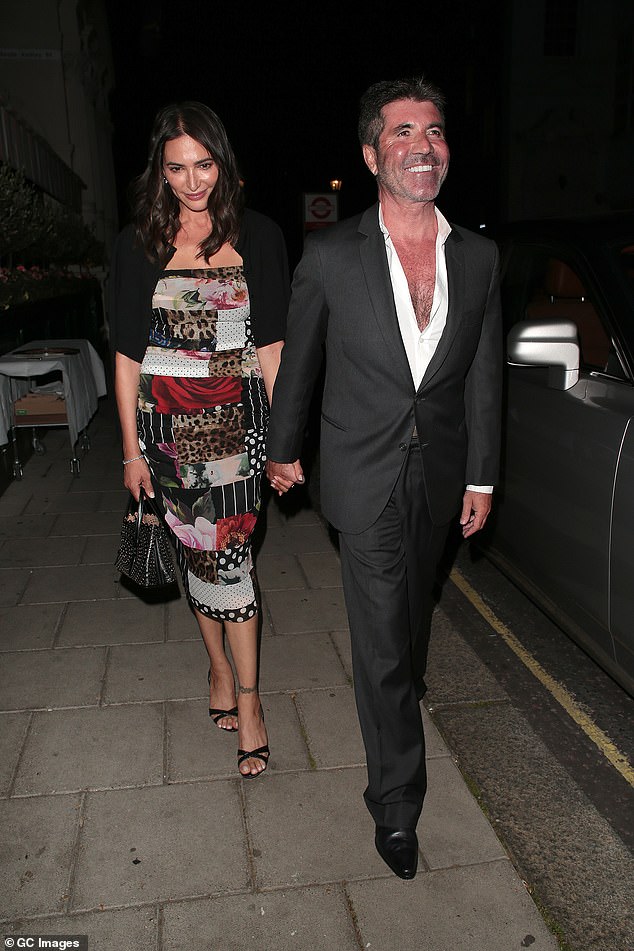 All in the details: Lauren toted her belongings in a stylish black handbag and wore a bracelet on both her right wrist and left ankle

A source added: ‘Simon won’t be going to Israel after all. I know it has already been announced that he was one of the judges, but for a number of reasons he just can’t be there in Israel to film the show now.

‘Of course he is bitterly disappointed – but it was a decision he had to take.’ 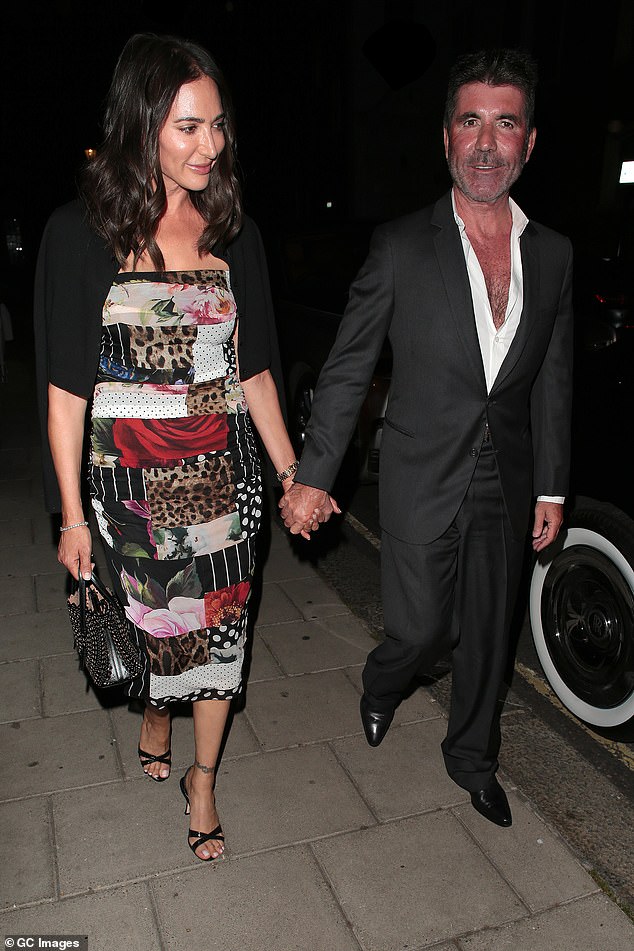 Happy: Simon and Lauren were in high spirits as they strolled through the capital and made sure to smile for photographers 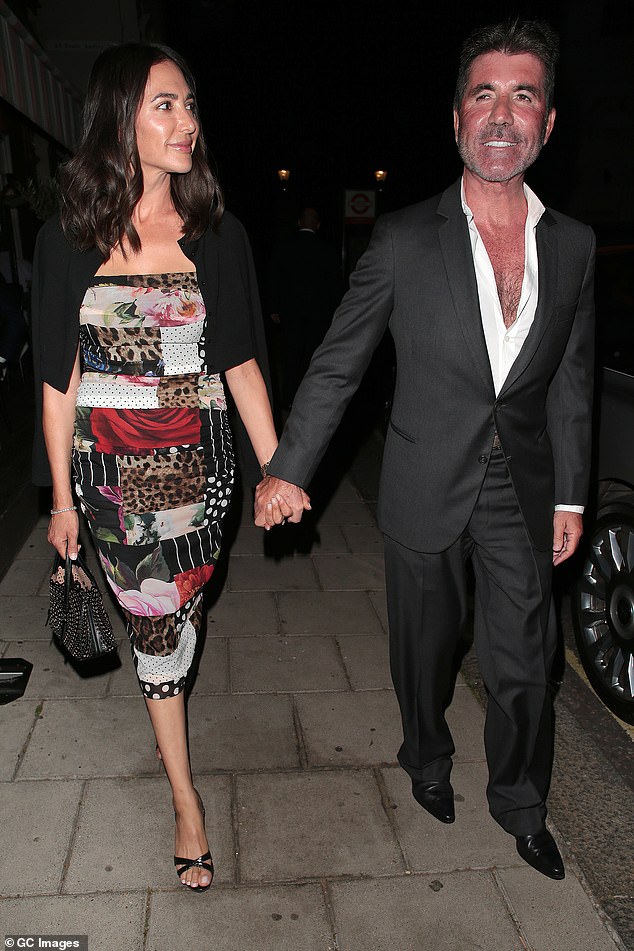 Hot spot: The pair had spent the evening at Mayfair hotspot Harry’s alongside media mogul Richard Desmond and and his wife Joy Canfield 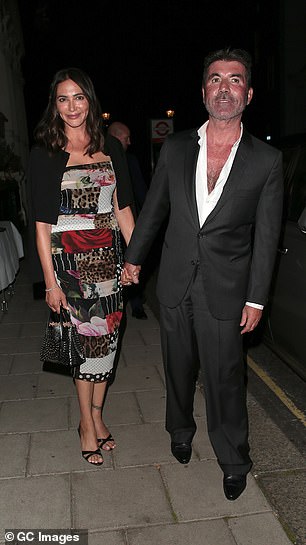 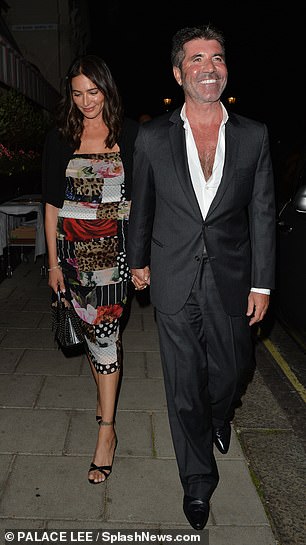 Glam: Lauren opted for natural-look glam while Simon was sporting an impressive sun tan after spending time in the US

The show had already been delayed due to the pandemic, originally intended to begin production at the end of 2020.

Simon was set to be a judge, alongside 2018 Eurovision winner Netta Barzilai, and singers Aviv Geffen, Margalit Tzanani, Miri Mesika and Ran Danker.

‘I can barely wait to see what the Israelis have to offer,’ was Simon’s comment when he was first slated to appear on the show.

Yet it seems he won’t be taking part at all as the the violent clashes between Arabs and Jews in Israel have resulted in terrible scenes not witnessed in more than two decades. 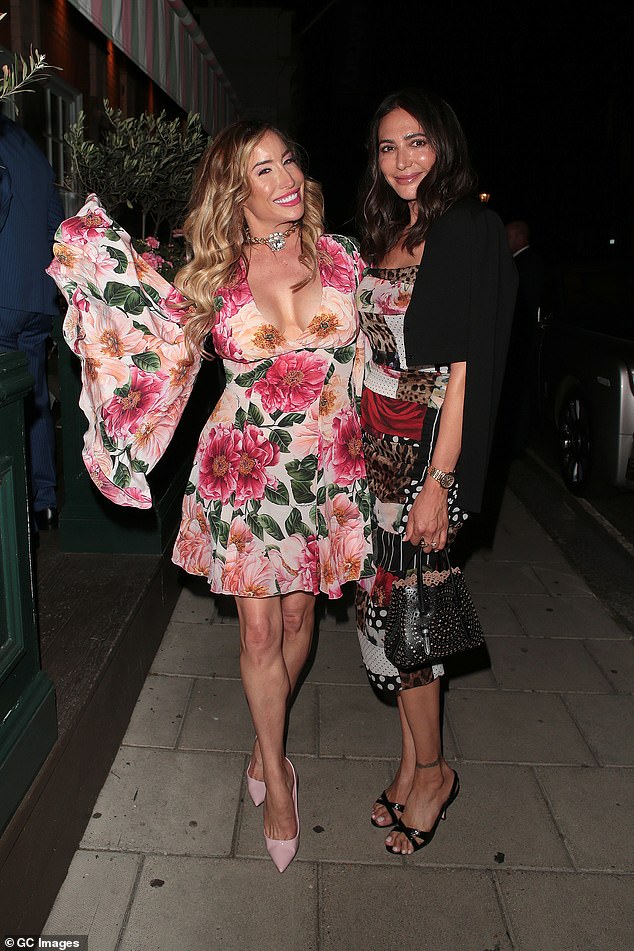 Friends: Doting mother Lauren made sure to pose with Joy, who looked fabulous in a plunging floral dress

Standing tall: Joy teamed her summery frock with a pair of pale pink heels and wore a swipe of bright pink lipstick 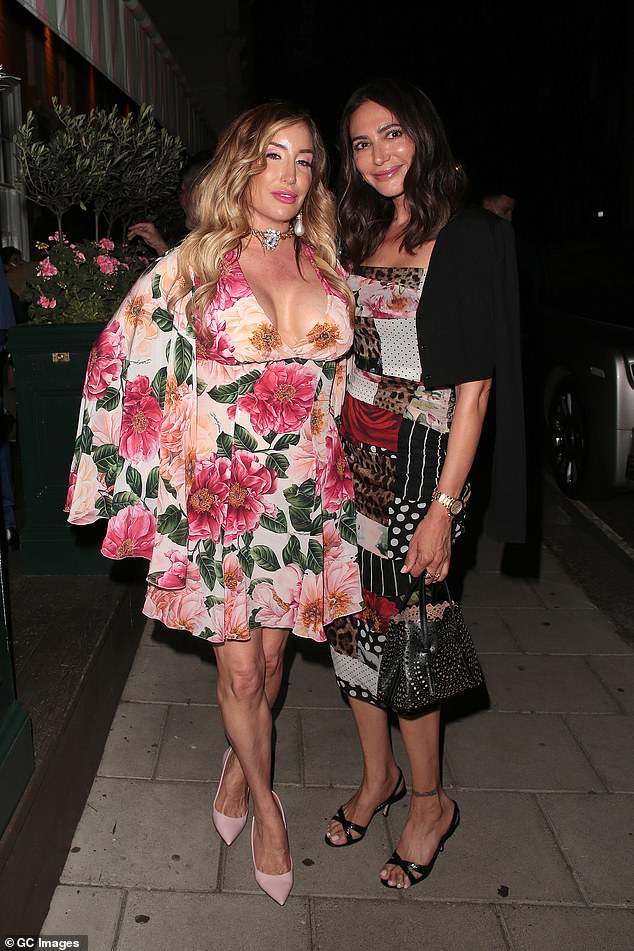 Smile! Both Lauren and Joy took the time to pose for photographers before heading home

A focal point of clashes was Jerusalem’s Al-Aqsa Mosque, built on a hilltop compound that is revered by Jews and Muslims.

Israel regards Jerusalem in its entirety as its capital, while the Palestinians want east Jerusalem to be the capital of their future state.

Simon reportedly has his hands full with other projects meanwhile, as he is said to be working on a new talent show with plans to air it on one of ITV’s ‘rival channels’.

The mogul is currently ‘weighing up his options’ and even considering taking his new show to a streaming platform such as Netflix instead of airing it on a terrestrial channel. 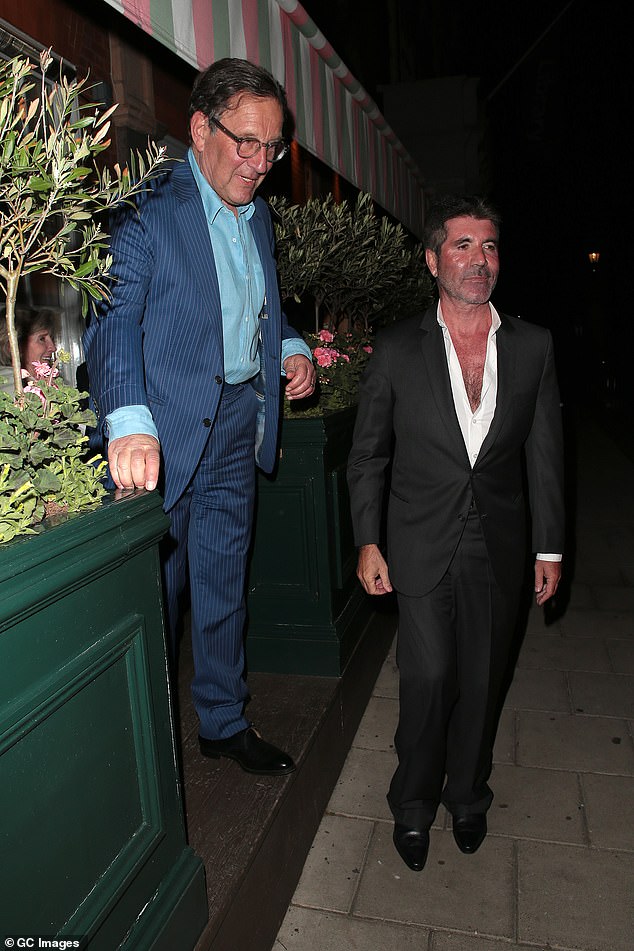 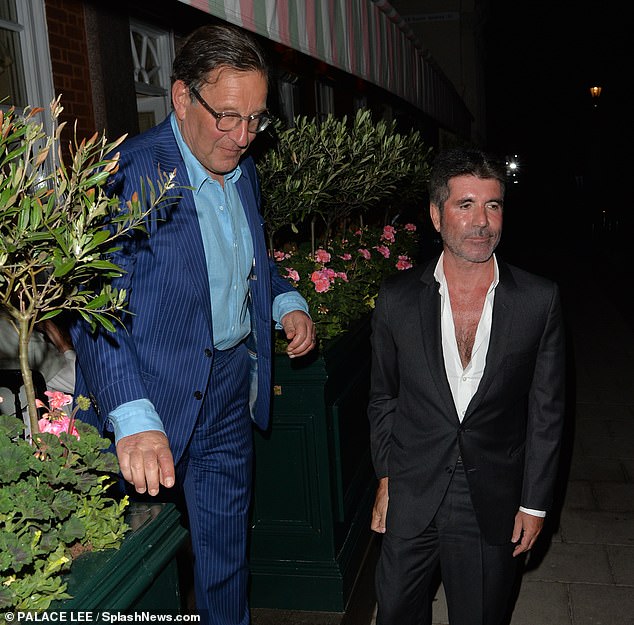 Smart: Richard looked smart in a navy pinstripe suit which he teamed with a bright blue shirt and smart shoes 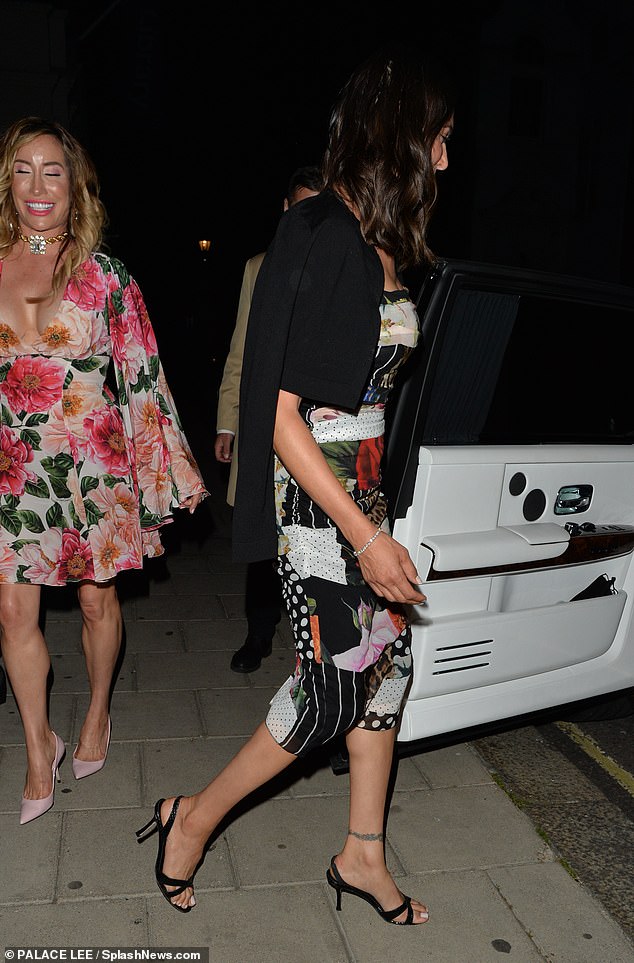 Time to go home: Lauren showed off her immaculate pedicure as she stepped into her and Simon’s cab

The Sun reports that ‘Simon has told friends he is sick of competitors trying to out-do the brand, so decided he would do it himself’.

A source told the paper: ‘Simon is constantly thinking creatively of new ideas and shows, innovating and evolving all the time. He’s vowed that his next show will be bigger and better than BGT.’

They added: ‘He’s weighing up his options. Simon has a big vision and the likes of Netflix have hundreds of millions in their coffers to help make it a reality.’

Simon recently returned to the America’s Got Talent judging panel after breaking his back in a horrific bike accident. 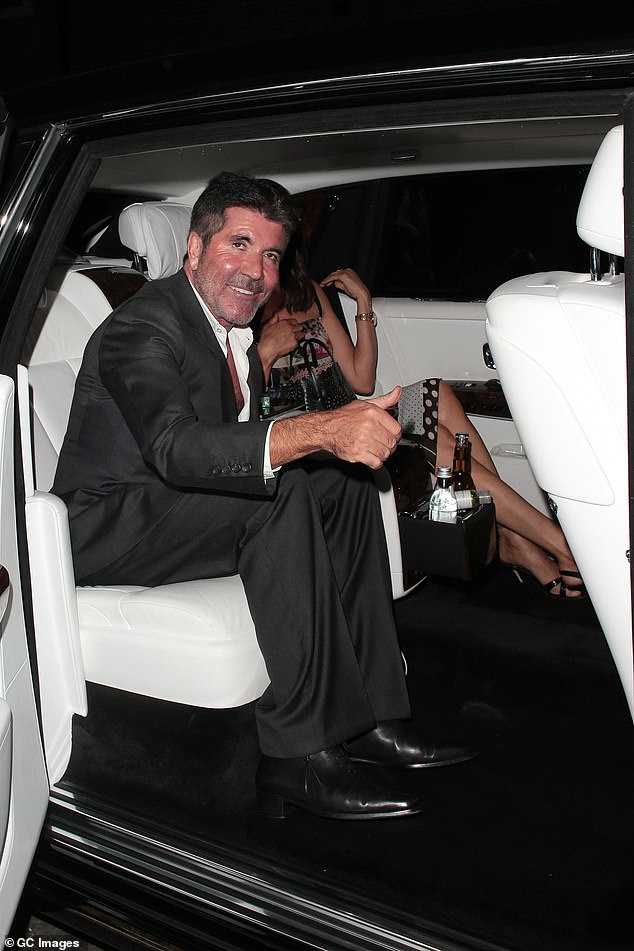 Thumbs up! Happy to be calling it a night, Simon flashed photographers a thumbs up before closing the car door 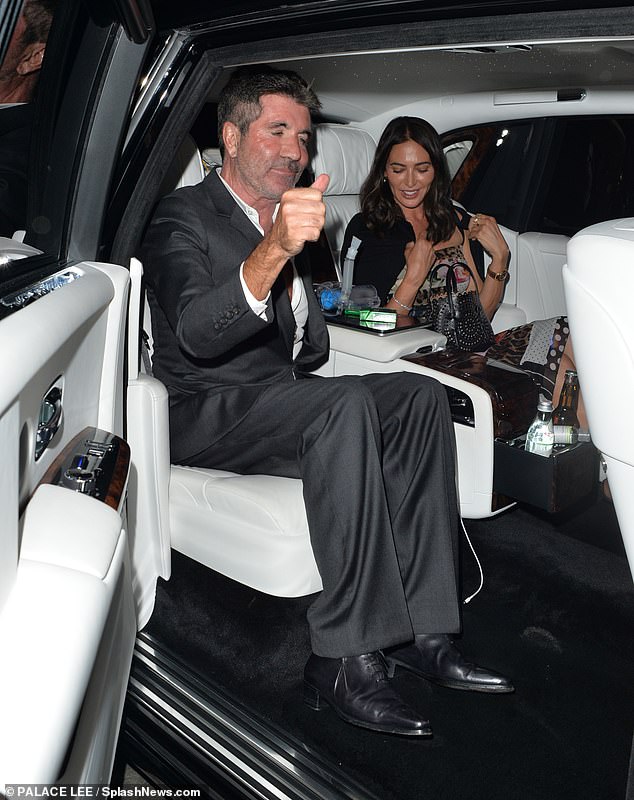 Stocked to the nines: Simon and Lauren’s transport was freshly stocked with bottles of water for them to enjoy

The father-of-one had to undergo a six-hour surgery to have a rod inserted after the crash.

He was at least doing well enough after the accident to share a short message on his social media accounts.

‘Some good advice… If you buy an electric trail bike, read the manual before you ride it for the first time,’ he wrote ominously.

‘I have broken part of my back. Thank you to everyone for your kind messages. And a massive thank you to all the nurses and doctors. Some of the nicest people I have ever me.’

Simon was with his girlfriend Lauren, their son Eric and her son from a previous relationship at the time of the accident, according to ABC News.

Because of his injuries, the record executive was forced to miss out on the return of his series America’s Got Talent.

In October, The Sun reported that Simon had taken a turn for the worse that would delay his recovery significantly.

He suffered complications from surgery to fuse two vertebrae, which required him to mostly stay in bed for six months.

At the time, he was reported to be on heavy painkillers and was too unwell to even record short promos for America’s Got Talent from home. 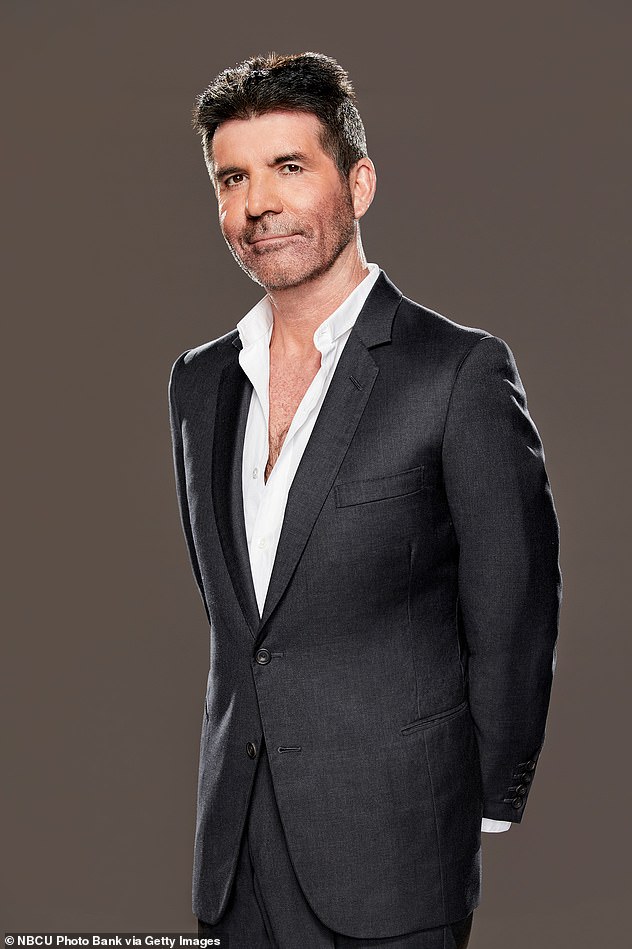 ‘Legitimate concerns’: Simon has reportedly pulled out of jetting to Israel to take part in their version of The X Factor due to the violence in Gaza

However, he was still able to walk a bit around his home garden and to do some light physical therapy in a pool.

But by February of this year, Simon said he was doing considerably better and seemed to be in high spirits.

‘The first four weeks were the hardest,’ he recalled to ET in that month. ‘Because you feel kind of helpless, and it was the first time in my life I’ve ever felt helpless. Then you’re bored and frustrated, and I was in so much pain, if I’m being honest with you.’

As he described it, the pain disappeared miraculously weeks after recovery.

‘Just like the doctor said, you hit this kinda seven, eight-week mark, and it’s like it never happened. I mean, literally like that, so there were a lot of pluses,’ he continued. 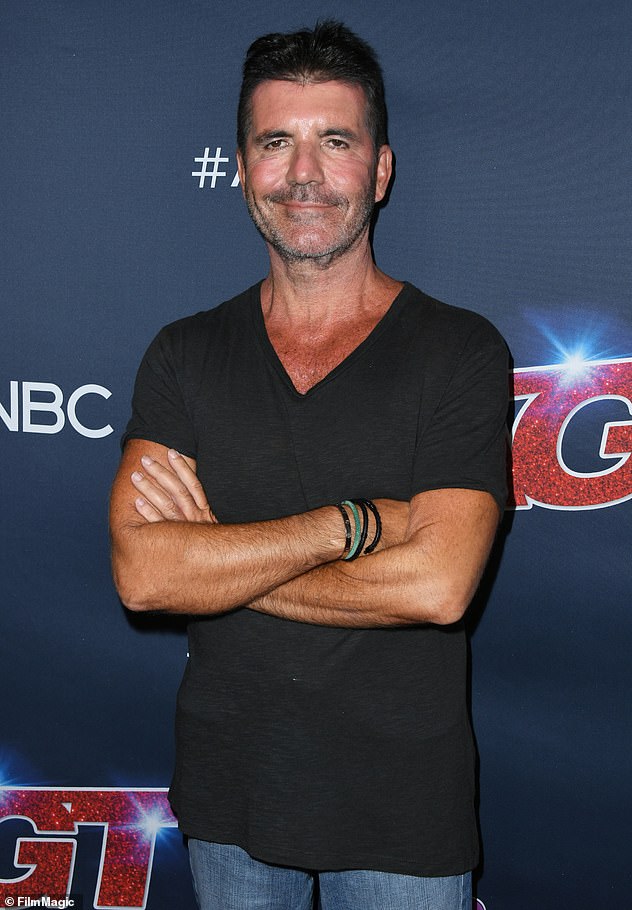 A source said: ‘Simon won’t be going to Israel after all. I know it has already been announced that he was one of the judges, but for a number of reasons he just can’t be there in Israel to film the show now’