Simeon Boikov’s  flag-waving soiree to celebrate the Soviet Union’s victory against the German Nazis in World War II was attended by Russian loving bikies, diplomats and his glamorous wife Katia.

On a boat decked out with hammer and sickle flags, balloons in Russian flag colours of red, white and blue, the guests enjoyed food and wine, Russian folk songs and danced on the decks.

Dressed in military uniform and a nautical style striped shirt, Mr Boikov stood stiffly at attention while a Russian anthem was played before columns of balloons in the Russian St George colours of orange and black and a glorious view of the harbour behind him.

In a particularly disturbing moment Boikov asks members of the Australian chapter of the Lone Wolf Motorcycle Club – Putin’s confessed favourite bikie gang – what they want to say to Asov Battalion, the Ukraine regiment holding out against Russian forces in the besieged port city of Mariupol, and two of them reply: ‘You’ll be gone” and ‘You won’t last long’. 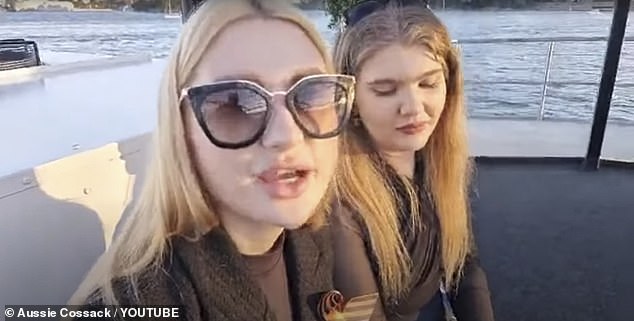 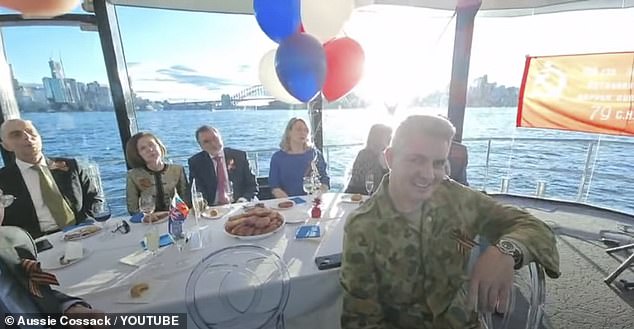 When the Aussie Cossack asks members of the Australian chapter of the Lone Wolf bikie gang what to say to a Ukrainian regiment, they reply, ‘you’ll be gone’

The self-styled ‘Aussie Cossack’ also used the event to stage a mock Russian ‘invasion’ with a tiny motor boat with two dogs and a Russian flag aboard speeding past, a NSW Water Police craft in pursuit.

Boikov can be heard saying as guests laugh on one of several videos he’s posted online of his party, ‘Guys. Can you believe this? We’ve got a Russian ship.

‘We’ve got Putin’s operatives on Sydney Harbour and in close … proximity we’ve got the NSW Police are hot on their tail.

‘I don’t know how this is going to end. But I’ve never seen this before.’

Mr Boikov’s harbour party was held on Sunday to celebrate the  ‘9th of May Victory Day’ marking Russia’s defeat 1945 over Nazi Germany in World War II.

Across Russia on Monday, Russian President Vladimir Putin is holding massive Victory Day parades including a huge show of strength rolling out in Moscow, even as his army marks up to 25,000 soldiers killed in the war against Ukraine.

With a video camera following him, Boikov does a walk-through of his party, interviewing his wife Ekaterina Olshannikova about her great grandfathers fighting in WWII.

He approaches members of the Australian chapter of the Lone Wolf Motorcycle Club, which is Vladimir Putin’s confessed favourite bikie gang, who he describes as ‘scary looking bikers’.

Russian ambassador (HE Alexey Pavlovsky) was there. My speech outlined a five point plan for world peace – see?

Cameron is an evangelical Christian who revealed he’d had an extramarital affair with an ‘exotic solicitor’ while his wife was pregnant with twins, and lost his seat of Parramatta two months later in the 2004 election.

Ruddick is an anti-vaxxer, a mortgage broker and author of a 2018 book, Make the Liberal Party Great Again, and the Liberal Democrats lead NSW Senate prospect. 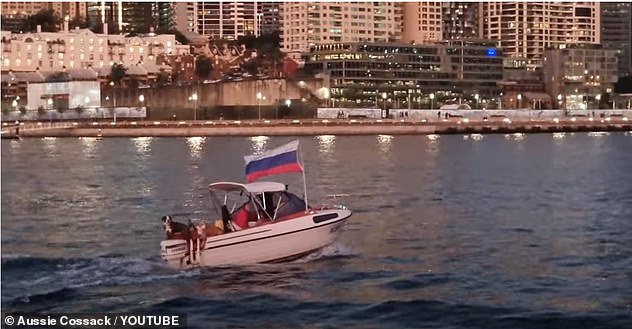 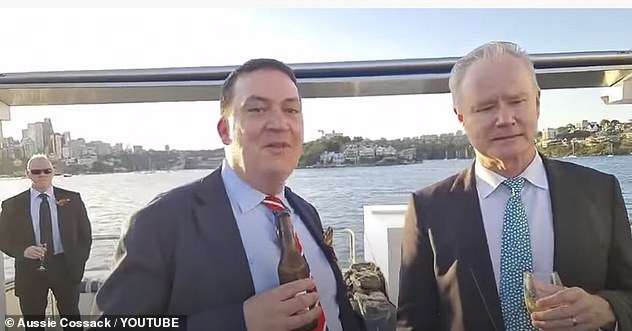 But Ruddick went on to say, ‘we don’t agree on everything … that’s why we’re mates, but it also includes … for Ukraine to … have a constitutional amendment saying no military alliances.

‘We also want NATO out of the Baltic states. It’s too provocative. If one nuclear bomb goes off , 50 will go off.’

Ross Cameron, who once described Vladimir Putin as  ‘Russia’s finest leader since Peter the Great’ said on camera, ‘I’m here on victory in Europe day, the celebration of the defeat of fascism in Europe which, let’s be honest, was a close run thing.

‘It could have gone either way. And whilst we say that war is an ugly thing …. It is for leaders to avoid avoidable war. 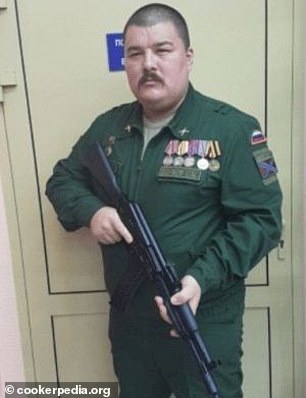 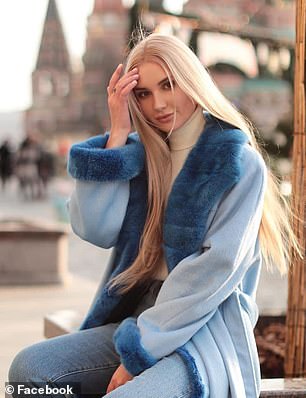 ‘And I believe we are on the brink of a completely avoidable war. This is a war which is capable of being completely resolved.’

Simeon Boikov has been Pro-Russian campaigner since the start of the war in Ukraine, and has denounced Prime Minister Scott Morrison’s $70m military support for Volodymyr Zelensky’s regime.

The 32-year-old construction professional, who is the founder of the patriotic Russian Australian Aussie Cossack movement, is keen for Australians to see Putin as a ‘liberator’ not an invader or ‘occupier’.

Mr Boikov and his glamorous wife – who he says is even more ‘staunch’ and ‘disgusted’ with West’s support of Ukraine have promoted the belief that Ukrainian forces are ‘neo Nazi’. 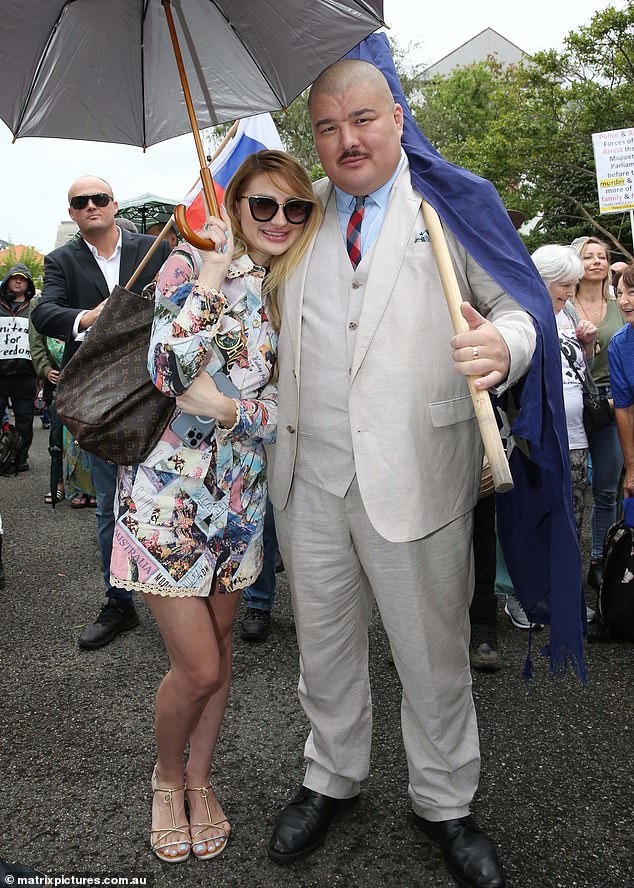 Mr Boikov has attacked Australia’s plan to send Ukraine missiles, saying the Prime Minister is ‘a complete fool’ who has put Australia’s national security at risk.

He said Mr Morrison’s  pledge to fund missiles for Ukraine had made Australia a ‘target’ for Russian President Vladimir Putin.

Mr Boikov told Daily Mail Australia described the West’s campaign to get behind Ukraine and oppose Russia as ‘virtue signalling’ and derided ‘Instagram models …. who suddenly overnight become interested in the war’ and put the yellow and blue colours of the Ukraine flag on their Instagram pages like ‘they’re Parramatta Eels supporters”.

‘I am against war, but the war has replaced Covid as the latest fear mongering campaign,’ he said.