A couple who lost their puppy only for it to re-appear two weeks later believe he got stuck down a rabbit hole.

Stephen and Kathy Arnott of Marlborough, Wiltshire took their dog out for a country walk when he suddenly vanished.

Despite an intensive search involving the fire service and even a psychic, Kathy and Stephen couldn’t find Simba anywhere.

Stephen said: “It was terrible, he was with us one minute then like a puff of smoke he was gone the next minute.

Stephen and Kathy Arnott of Marlborough, Wiltshire took their dog out for a country walk when he suddenly vanished

“We live in the middle of beautiful farmland with hundreds and hundreds of rabbit holes and we had no idea where he’d gone.

“We initially thought he could have been taken by a buzzard or a red kite because he’s a tiny little dog but we then narrowed it down that he must be down a hole, but where to begin?

“We spent a week with the help of a couple of local volunteers looking for him but no luck at all.”

When the couple ran out of ideas, they turned to a psychic for help – sending her a picture of the dog. The psychic then dialled in to Simba and said she could see through his eyes, determining his last known location with frightening accuracy. 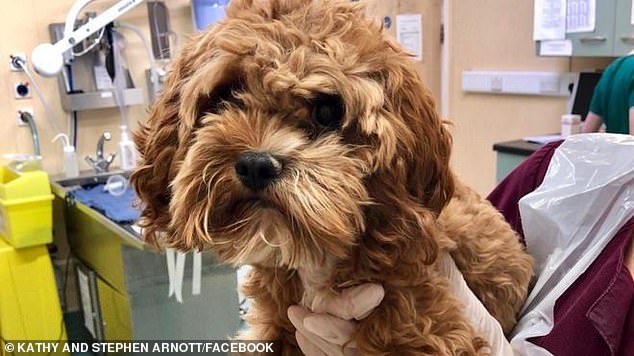 Despite an intensive search involving the fire service and even a psychic, Kathy and Stephen couldn’t find Simba anywhere

Then, with the local fire-brigade in tow, Stephen began investigating rabbit holes in that area.

Mr Arnott continued: “The psychic was based elsewhere in the UK but we sent a photo of the dog, we were prepared to be open minded but we were grasping at straws because we had no idea.

“The psychic gave us a couple of cryptic clues, she said she could see through Simbas’ eyes where he had been or where his last movements were.

“That gave us enough of a clue to start searching that part of the land which ironically was almost exactly where we last saw him, but it was so overgrown with nettles that we actually didn’t consider him to have gone in that direction.” 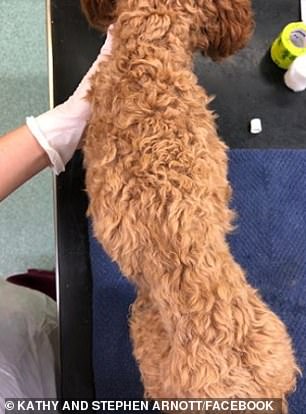 Simba returned to his family on Tuesday, June 23, and is now being cared for at a local vet

Despite a full day’s search, there was still no sign of Simba and the family began to give up hope.

Mr Arnott added: “We did start grieving halfway through last week, then he just turned up. He reappeared in a puff of smoke.

“I took the bins out on Tuesday morning and looked down at my feet and there he was, obviously a very different dog because he lost half his body weight and was very dishevelled and dirty.

“But he still had the fortitude to make his way home, he’d lost so much weight he could wriggle out the hole no doubt, and we were completely over joyed.

“I ran upstairs and shouted to my wife, ‘Simba’s alive’.

“He is a remarkable little character, he’s very small but he’s got a massive big heart.

“His name is very appropriate, but he’s not a terrier – we never imagined he could survive for even five days down a hole, but 14 days is very unusual..”

Simba returned to his family on Tuesday, June 23, and is now being cared for at a local vet.