EXPRESS INFORMER > News & Politics > Side effects? It’s time to give your pills a yellow card

It took five years for the drug, launched globally in 1956, to be withdrawn from sale, during which time an estimated 10,000 children worldwide were born with missing or grossly malformed limbs after their mothers took the drug while pregnant to combat morning sickness.

Called the Yellow Card Scheme (after the yellow forms initially used), it allows doctors, pharmacists and more recently patients themselves to report adverse reactions believed to be caused by prescription and over-the-counter drugs, implants and alternative medicines [File photo]

But with no formal system in place for doctors, patients or relatives to report suspected side-effects, it was only when a handful of concerned medics raised the alarm in science journals and at conferences that the drug’s grim toll finally came to light.

As a direct result of the scandal, in 1964 the UK became one of the first countries in the world to set up a programme for reporting suspected drug side-effects.

Called the Yellow Card Scheme (after the yellow forms initially used), it allows doctors, pharmacists and more recently patients themselves to report adverse reactions believed to be caused by prescription and over-the-counter drugs, implants and alternative medicines.

How to report a reaction

Suspected drug side-effects: Go to yellowcard.mhra.gov.uk, freephone 0800 731 6789 (9am to 5pm, Monday to Friday) or download the smartphone app from Google Play Store or Apple App Store.

This can lead to them being reviewed, having warnings added to the label or even being taken off the market.

However, a yellow card report is not proof that the drug has caused the unwanted side-effect.

Last month, the drug safety watchdog the Medicines and Healthcare products Regulatory Agency (MHRA), which oversees the scheme, received its one millionth report of a suspected adverse drug reaction.

And now, as the biggest vaccination programme in the history of the NHS begins, it is bracing itself for an unprecedented surge in reports, expecting an extra 100,000 in the next six to 12 months from Covid-19 jabs alone.

That’s more than five times the average number of reports it receives for all other drugs at the moment.

Such is the expected increase in workload that it has paid £1.5 million for an artificial intelligence program — a complex computer algorithm — to help sift through the complaints, and it has set up a dedicated coronavirus Yellow Card reporting website (coronavirus-yellowcard.mhra.gov.uk).

Experts say the anticipated surge is more to do with the scale of the vaccination exercise than any underlying fears about the safety of the jabs.

During the trials of the Pfizer jab on 44,000 volunteers, the most common side-effects reported were pain at the injection site, tiredness, headache, muscle pain, chills and fever.

However, earlier this month the MHRA warned medics immunising the first wave of patients to avoid vaccinating anyone with a history of severe allergies, after two patients suffered serious reactions within minutes of being injected.

Both recovered after treatment with adrenaline, which dampens what can be a life-threatening reaction in the immune system. 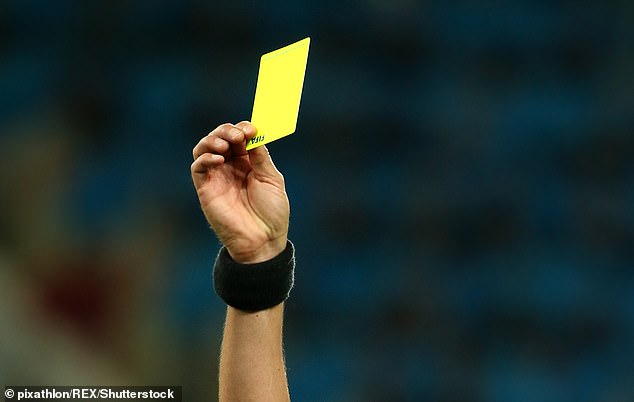 Called the Yellow Card Scheme (after the yellow forms initially used), it allows doctors, pharmacists and more recently patients themselves to report adverse reactions believed to be caused by prescription and over-the-counter drugs, implants and alternative medicines

‘If the Yellow Card Scheme can help show these Covid-19 vaccines are safe for the vast majority of patients and that reactions are mostly minor, then that could be a major benefit,’ says Dr Dan Hawcutt, a senior lecturer in paediatric pharmacology at Liverpool University.

So how well does the scheme work? It has received an average of nearly 18,000 reports a year since it began in 1964 — and it has had some notable successes.

Once a week, the organisation’s own experts trawl through the latest reports, together with information from other countries.

In 2009, it found that patients taking the blood-thinner warfarin should avoid drinking cranberry juice, as it can exacerbate the effect of the drug and increase the risk of potentially fatal bleeding.

And in 2014, the MHRA warned doctors to monitor closely all patients being prescribed drugs called TNF inhibitors (widely used to treat rheumatoid arthritis, Crohn’s disease and ulcerative colitis) following increased reports from GPs and patients of cases of tuberculosis among those given the drugs — now it’s a recognised side-effect of the medication.

Yet there are long-standing concerns that the scheme picks up only a fraction of the side-effects that may be caused by drugs.

According to some estimates, just one in ten serious reactions is reported to the scheme — and only between 2 per cent and 4 per cent of less serious effects. A 2019 investigation by researchers at Cardiff University, published in the journal Pharmacoepidemiology and Drug Safety, found that out of 372 community pharmacists questioned, more than half had never submitted a Yellow Card report in their careers.

Doctors and pharmacists blame time constraints, uncertainty about what type of reactions to report and often having to take patients’ word for possible side-effects, rather than being able to see them for themselves.

If complaints are not already listed on the drug’s packaging or in the British National Formulary — the ‘bible’ that most doctors rely on for up-to-date information on medicines — they may not be considered genuine by doctors, even though one of the main purposes of the scheme is to highlight rare reactions not seen during clinical trials, where the number of patients involved is much smaller — usually an average of only 1,500.

Many patients, meanwhile, simply may not realise they can bypass their GPs and report suspicious reactions directly to the MHRA online or via freepost — despite repeated publicity campaigns.

‘Under-reporting is a problem with the Yellow Card Scheme,’ says Dr Hawcutt.

‘It relies on busy people to take time out to report suspected side-effects and some simply may not get around to it.’

Dr Marc Watson, from the Faculty of Pharmaceutical Medicine — a charity representing around 1,500 scientists in the drug industry — adds: ‘The system has helped to provide a high level of safety surveillance in the UK.

‘But the most likely factor behind under-reporting is a lack of awareness among patients that they are even able to do it, or they favour informing their GP instead and expect them to report it.’

Others say many patients may only report problems directly if they feel their doctor has not been taking them seriously.

Liz Ovington, 40, from Derbyshire, has seen for herself how reporting a suspected side-effect through the Yellow Card Scheme can help others.

The mother of two developed high blood pressure during her second pregnancy in 2018 and was prescribed a drug called labetalol to bring it under control.

Although it helped to reduce her high blood pressure, Liz started to develop an extreme burning sensation in the nipple within minutes of taking the drug — an effect which gradually intensified over the next 20 minutes, before starting to wane.

‘It was agony,’ says Liz. ‘At first, I didn’t make the link between the tablets and the pain — I presumed it was just a pregnancy side-effect.

‘Neither my doctor nor any of the nurses or midwives had heard of it and it was not listed as a side-effect of the medication.

‘The only way I could relieve it was to keep that area really warm, wrapped in clothing or a blanket.

‘If I walked down the refrigerated aisle in the supermarket, the pain would instantly return.’

Liz decided to file a report to the Yellow Card Scheme when a sympathetic nurse mentioned it to her.

‘I was worried that this might be a side-effect that had been missed, however rare, and that other women might be suffering too,’ says Liz.

After several months of investigating the evidence, including scrutinising clinical data on the drug, the MHRA concluded that the nipple pain was a symptom of Raynaud’s syndrome — a condition where reduced circulation in the body’s extremities causes a sensation of extreme cold and pain.

Raynaud’s syndrome was already a known side-effect of labetalol, but nipple pain was not recorded as a specific reaction. It is now listed as a possible side-effect.

The change came too late to help Liz as she no longer takes the medication (the symptom disappeared as soon as she stopped), but she is pleased her report may have helped others.

‘It’s good to know I’ve been able to make a difference,’ says Liz. ‘Now anyone else experiencing this problem will understand its probable cause.’

The MHRA says anyone suspecting a drug allergy or side-effect should consult their GP before they stop taking the medication.