Even before Saturday’s gloomy announcement, Christmas was shaping up to be a rather muted affair for many of us; one characterised by cancelled plans and the absence of loved ones.

It certainly feels that way to me. Like others with relatives dotted around the UK and abroad, I haven’t seen some of my closest family, including my mother, for well over a year.

They are on my mind a great deal, and the usual festive traditions I treasure are all the more poignant because of that.

In a year when we are all trying to cling on to what we can to make the festivities seem ‘normal’, I have found myself resting on the lovely memories of Christmases past for comfort — nursing my cup of hot chocolate in front of the fire and remembering how lucky I am despite all this.

Certainly, it is the first time in years that my family have been in the UK at this time of year.

Like others with relatives dotted around the UK and abroad, Shruti Advani (pictured outside her home) has not seen some of her closest family for well over a year

Usually, following a festive tea together at The Wolseley in Piccadilly on the last day of my children’s school term, the Advani family jet off to more exotic climes.

For the past few years, this has meant that by now we’d be under the desert sky with the extended family, half a dozen children and a couple of nannies between us, housed in several villas at a gorgeous resort outside Dubai.

There are camel and pony rides for the children, alongside falconry shows and an opportunity to try their hand at archery — all of which allow me and my husband time to unwind together by our pool or in the spa.

In the evenings, we toast marshmallows round the firepits before watching a movie under the stars.

Not surprisingly, my children think of Santa as someone with a very well-stamped passport!

This year, however — characterised by cancelled plans and loneliness at best, and unemployment, ill-health and bereavement at worst — is different.

And so, long before London was plunged into Tier Four, we decided to spend Christmas in the UK and give the rather tidy sum of money we’d have spent on the trip to charity instead.

Some might see this as an entirely suitable penance. After all, I made headlines earlier this year when I wrote about how those in the top one per cent wealth bracket in the UK (my husband and I are lucky enough to be members) were handling the challenges of the pandemic.

It was meant to be tongue-in-cheek, while my worry for all who have suffered and continue to suffer this year is genuine.

But my confessions of resorting to £95-an-hour online tutoring to keep my children occupied, purchasing wildly expensive silk pyjamas for my business Zoom calls and my thrice-weekly flower deliveries led to me being roundly ridiculed in some quarters and mercilessly trolled in others.

While many of these indulgences kept me sane, I must confess that the reaction to my column in the Financial Times was traumatic — not least because some of the threats spilled over from cyber space into real life.

Under the circumstances, you might find it odd that I am back again, raising my head above the parapet at a time of year when many of us are feeling frustrated and angry at the many changes we have to endure. 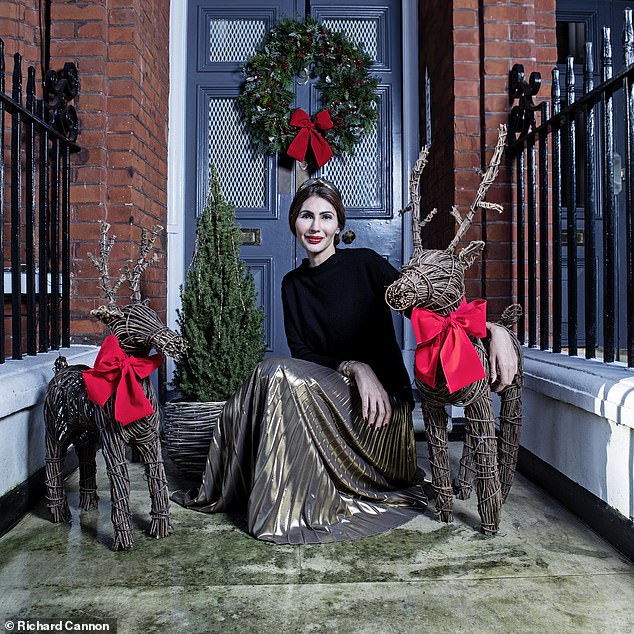 Long before London was plunged into Tier Four, Ms Advani and her family decided to spend Christmas in the UK

Has she learned nothing, some of you may be asking?

The answer to that is that I like to think so. I have certainly learnt that money is a tool that can used for greater good. Which is why much of the money I’d normally spend at Christmas is being given to worthy causes this year.

At the same time, I’m aware that a peek behind the made-to-measure shutters of the homes in some of London’s wealthiest postcodes is a guilty pleasure that few can resist.

I hope I can raise a smile when you read this, acknowledging that in the circles in which I move, a ‘dialled down’ Christmas means jettisoning the usual monogrammed designer bag that Santa puts under the tree (last year, mine was Louis Vuitton, alongside a beautiful pair of Van Cleef earrings) for a more practical iPhone 12.

In my case, I’ve also redirected some of the money I’d have spent on relatively dispensable designer Christmas party dresses and bought a long-lasting ‘investment’ coat for myself — as well as buying one for the Big Issue seller outside our local Tube station.

Indeed, I’ve come to realise the madness of some festive spending.

The formal lead-up to Christmas in my small corner of West London begins each November. It is a frenzy of Botox, fillers, highlights pedicures, blow-dries and facials to get ‘oven ready’ for the whirlwind of champagne receptions and intimate dinners.

And all this before the home decorations, personalised Christmas stationery, gift hampers and party frocks have been accounted for.

But Covid restrictions have put an end to all the partying, and instead of this year’s ‘it’ evening gown, it is a ‘self-care’ appointment with a therapist that is now the hottest ticket in town (for those who are still here, that is).

Many of my neighbours got out of London weeks ago and fled either to the Maldives or their country homes. And for once, there is an abundance of parking spaces on the mews road behind us.

But that’s not to say that those who have fled the capital are not still leaving their mark on London in their own way.

The owners of one three-storey, white stucco-fronted mansion near my home, for instance, have gone all out with the decorations. It has everything from tin soldiers to twinkling candy canes adorning its façade, topped off with a big red velvet bow.

It is the perfect Christmas home — except for the fact that there is no one living in it.

Meanwhile, our own London Christmas has been devoid of the usual frills: an audience with Santa at the Harrods Christmas Grotto for my boys, or the back-to-back soirees for the grown-ups at the smartest restaurants.

In their place, though, has been some precious family time — which I feel especially grateful for considering that so many millions of people have been forced to cancel their longed-for plans to come together.

For us, and despite my limited skills in the kitchen, it’s been festive feasting at home, thanks to some excellent food delivery services (they donate a meal to charity for every one bought through them).

Indeed, many of my usual luxuries now seem particularly out of place, but I’ll confess that a few still bring me comfort.

The diamonds and dancing shoes may have been put away, but winter has seen me replace those much talked-about silk Olivia von Halle pyjamas for a pair by the same designer in ‘winter velvet’ which I’ll be wearing through to the New Year.

They may be a far cry from the trusty black sequinned Balmain jacket I wore to the swanky do at a Dubai restaurant last New Year’s Eve, but they are undoubtedly more comfortable.

As for family traditions, we have stuck to our much treasured annual unfurling of a beautiful Christmas wreath over the mantelpiece. This year, it’s blue pine and red eucalyptus with gold and bronze pine cones inter-woven with flashes of blue velvet.

Usually, such loveliness does not come cheap, with these arrangements costing anywhere between £250 and £500.

But this year, a generous interior designer friend gifted a few arrangements and I was lucky enough to make the list — along with a lovely neighbour who lives alone and our local NHS hospital.

Nor have I foregone my affection for scented candles. My husband likes to joke that I am literally burning money, but I draw comfort from lighting my £47-a-piece beloved Diptyques, which I place in little groups around the house to light before breakfast and keep going through all of Christmas Day.

And I have even managed to supplement my much-mocked weekly flower deliveries during lockdown with an at-home fresh pastry and bread service. Far more seasonally appropriate!

These are not really sacrifices, I have to admit, and I would be mad to pretend otherwise. When I look around my world, I am struck by our privilege — but, believe me, not everyone has got the memo.

Like the breathtakingly beautiful woman, clad head-to-toe in Chanel, whom I overheard at my private members’ club bewailing the fact that her partner had misconstrued what she meant when she asked him for a luxury advent calendar.

She wanted baubles of the gemstone variety, but he had given her truffles, and she was devastated.

Or the mums I overheard on a coffee run to a local café complaining about contributing £50 towards gifts for the teachers at the £30,000-a-year private schools they send their children to.

‘They have had most of this year off, for God’s sake,’ one of them huffed, about a gift that was the same price as her weekly manicure.

One canny personal shopper I know, who is as skilled as a sniffer dog at hunting down seasonal must-haves, confided that she was almost reduced to tears because she could not get her hands on a PlayStation 5 for one client’s son.

She was spared the tears, though, because she did at least manage to get hold of a Hermes Birkin bag (they start from around £10,000 and can go up to hundreds of thousands) for the client by way of a consolation prize.

I couldn’t help but think it was a fitting reflection of our new topsy-turvy world when a gaming console trumps a designer handbag at the top of the most well-heeled Christmas lists.

My interior designer friend (who gifted me those wreaths) reports, meanwhile, that the void left by the closure of Michelin-starred restaurants is being filled by requests for ‘tablescaping’, meaning table settings — French porcelain plates, Italian linen napkins and Murano glassware — provided for your at-home dinner for around £80 per setting.

Not for me, though: I have not strayed from our well-worn but much-loved family silver service.

Truth be told, after the year that we have all had, the thought that I can hunker down at home in my velvet pyjamas, rather than endlessly dressing up for this or that function, is rather delightful.

In fact, despite the enormity of what has been going on, I have rather enjoyed some of this enforced period of solitude, whether it’s been baking with my boys in the afternoons or taking long Saturday evening soaks in the bath with a stack of magazines.

The extra time on my hands has allowed me to be more thoughtful and given me more time for others: from sending Champagne to a 90-year-old in a care home — a touch of extravagance which I hope raises a smile — to helping fundraise for a local food bank.

I enjoy having money, and I know I’m lucky to have it. But I am luckier still to have people to love, and the means to help them. I like to think, too, that memories of happier times are something all of us can access whatever the number in your bank account.

Certainly, this past year has been a time to acknowledge that bigger forces than us are in charge. While 2020 has, not unreasonably, made ‘rich’ a dirty word, I hope I can show that some good can come of it, too.

Shruti Advani is donating the fee for this article to The Felix Project, which redistributes surplus food from suppliers to charities and schools.