By Lucy White And Lucy Lamoury, Financial Mail On Sunday

The beleaguered boss of LV is facing a deluge of demands for his head from members, following his abortive attempt to sell the mutual insurer to a US private equity firm.

More than 1,000 readers have written to The Mail on Sunday and the Daily Mail calling for a no-confidence vote on chief executive Mark Hartigan at the annual meeting.

John Higgins, a loyal customer of LV for 50 years, is urging his fellow members to support his campaign to remove Hartigan from his £1million-a-year job.

Demand: More than 1,000 readers have written to us calling for a no-confidence vote on chief executive Mark Hartigan at the annual meeting

That target has already been easily surpassed as angry policyholders have flooded our offices with messages of support.

Now LV management is on course for an embarrassing showdown with its customers, who collectively own the business.

Hartigan was the architect of an expensive and ill-fated plan to sell LV to US private equity firm Bain Capital, which failed to win the backing of members.

Despite this debacle, Hartigan remains in his lucrative post. He was paid more than £1million for last year, including a £511,000 bonus which the board still doled out.

Higgins, 86, whose wife is a former LV employee, said: ‘I am determined to see this through to the end.’

A former Procter & Gamble salesman with two daughters, who lives in Ayrshire, he added: ‘I want Hartigan gone and the board to go as well.’ Looking through the pile of messages sent by members to our offices, Higgins, who has become the face of the customer rebellion, said: ‘It’s incredible. It just shows how angry members are with Hartigan. How does he think he can carry on?’

LV’s former chairman, Alan Cook, quit in February but the insurer has yet to appoint a permanent replacement. Seamus Creedon, a director, has been standing in.

Influential MPs are backing the revolt. Conservative Kevin Hollinrake, who sits on Parliament’s Treasury Committee, said: ‘It’s high time Mark Hartigan left the company. Every day he stays he’s earning more of members’ money, and any delaying is only acting in his interests.’

Labour MP Gareth Thomas, leader of the parliamentary all-party group on mutuals, said: ‘Mark Hartigan and Alan Cook frittered away a staggering amount of LV owners’ money on their vanity project, which could have been invested in the business and better benefits for members. It’s time for Mark Hartigan to go.’

Members of the insurer, formerly known as Liverpool Victoria, are irritated it has still not confirmed the date of its annual meeting, expected in the autumn.

LV was founded in 1843 to help the poor of Liverpool pay for a decent burial. Its mutual structure means it is run for the benefit of customers rather than a profit-hungry investor. 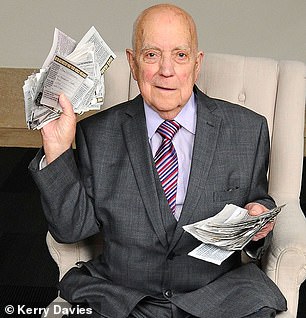 After Hartigan and Cook revealed their plan to sell LV to Bain, members feared that the private equity firm would milk LV for cash, cutting services and bumping up prices.

They declined to back the deal in sufficient numbers for it to go ahead, but not before £33million of their money was spent on advisers.

Their outrage meant that Cook, who had spearheaded the attempt to sell LV, was forced out.

Higgins said: ‘The directors were all jumping on the Bain bandwagon last year and then did a screeching U-turn when it failed.’

Members are uneasy because they have since heard little about plans for LV’s future.

Before the vote, Cook and Hartigan were adamant the deal was the only way for LV to survive. After their defeat, they changed tack, arguing the insurer can perform well as an independent.

Creedon has backed Hartigan, saying: ‘I have high confidence in him and his team.’

But Higgins, along with the army of members who have contacted the Mail on Sunday, disagree. They want a new top team to take LV forward.