EXPRESS INFORMER > Business & Finances > Should you take a bet on travel shares taking off?

If you wanted one image to symbolise the economic turmoil that is 2022, you could do worse than a picture of an airport. Not only was the runway at London Luton Airport almost liquefied by the heatwave of the past few days, but the share prices of many travel companies and flight schedules are in meltdown, too.

And yet, as we enter the first summer without major travel restrictions since the advent of Covid in 2020, Britons are desperate to go abroad.

‘Right now, people want to get away and many have got the savings to do it,’ says Danni Hewson, financial analyst at wealth platform AJ Bell.

So why are travel shares, as well as planes, struggling to take off?

Turbulence: Why are travel shares, as well as planes, struggling to take off?

This time last year, we were in the middle of ‘staycation summer’ as Covid restrictions kept changing, meaning it was hard to leave the country.

Those brave enough to book a flight abroad faced the worry that their destination would be added to the ‘Red List’ while they were in mid-air, forcing quarantine on their return. There was also the extra cost of Covid travel testing hanging over them.

For travel businesses, the uncertainty was disastrous, and many went cap-in-hand to their shareholders for bailouts. Now, though few restrictions remain, for the vaccinated at least, and most are desperate to go on holidays, travel seems to be faring worse than ever.

Earlier this month, Heathrow Airport bosses announced they were capping the number of people going through its gates, due to a lack of security staff and other issues.

Other airports have done the same, while airlines had already been trimming flights due to staffing problems. Flight delays are now the norm, rather than the exception. Every one of the travel horror stories you hear is bad news for travel stocks.

‘Every tale of disruption is likely to come with a compensation bill, which is more money the airlines can’t afford to lose,’ Hewson warns. ‘This summer was supposed to bring salvation to the travel industry and instead it has brought more troubles.’

Small wonder, given current disruptions, that many travel shares are grounded. British Airways owner International Consolidated Airlines Group (IAG) has seen its shares drop by 28 per cent since the start of the year, while respective falls of 37, 47, 54 and 59 per cent have been recorded by easyJet, TUI Travel, cruise liner firm Carnival Corporation and Wizz Air.

But with uncertainty around how much these shares will recover, and how quickly, investment experts are divided on whether now represents a buying opportunity. Richard Hunter, head of markets at wealth platform Interactive Investor, points out that due to lingering pandemic-related issues, these businesses are not in good financial shape and many have had to refinance.

‘None of these stocks are therefore paying a dividend, nor are they likely to do so until their balance sheets have been repaired,’ he adds.

Analysts are bullish on some travel stocks. EasyJet, for example, is rated as a strong ‘buy’ by most analysts, while shares in IAG are considered a ‘hold’. Both TUI and Carnival are still rated as ‘sells’ by most analysts.

Some travel brands have fared better than others – and may continue to do so.

Rob Burgeman is senior investment manager at wealth manager Brewin Dolphin. He suggests hotel groups might be a winner, both at home and abroad. He says that shares in Intercontinental Hotels Group – owner of Holiday Inn, Crowne Plaza and InterContinental Hotels and Resorts – are ‘well liked by analysts and are not particularly expensive’.

Meanwhile, Whitbread, the former brewer, is now more or less a bet on the fortunes of Premier Inn – its core brand. The budget hotel brand is popular with staycationers and UK business travellers alike.

Burgeman adds: ‘Their hotels may not represent the most glamorous getaway, but they do what they say on the tin and are largely well-run operations. Whitbread also provides a route into the staycation market if people decide going abroad is too much hassle.’

He also likes its growing German business. Whitbread shares are down 5.25 per cent over the past year while shares in IHG are up 4.5 per cent. Since the start of the year, the shares are down 14 and 4.8 per cent respectively.

Blake Hutchins, co-manager on investment trust Troy Income & Growth (see Fund Focus on Page 93) and James Harries, manager of Securities Trust of Scotland, also like IHG, which they say proved its worth during the pandemic by not having to raise capital from shareholders.

Harries says: ‘As a brand owner, as opposed to a physical hotel owner, IHG enjoys high profit margins. It is cash generative and far more resilient than typical hotel and leisure companies.

‘Whilst IHG is exposed to the economic cycle to some extent, its high margins and propensity to pay good dividends make it a good investment proposition.’

CONSIDER BUYING INTO THE WIDER LANDSCAPE

Other ways to cash in on people’s hunger for travel include looking at the businesses that benefit as we move around the globe.

Burgeman, at Brewin Dolphin, likes WHSmith, whose branches are in airports, train stations and service stations.

‘The shares are up by around 50 per cent on their Covid-19 low, but still some way off their peak prior to the pandemic,’ he says.

Alternatively, you could look at SSP, which owns the businesses where people spend money when their plane gets delayed – the likes of UpperCrust, Camden Food Co and Ritazza. He adds: ‘With more delays at airports inevitable, SSP will benefit from more people having to spend longer in terminals – having to eat, drink, or read.’ 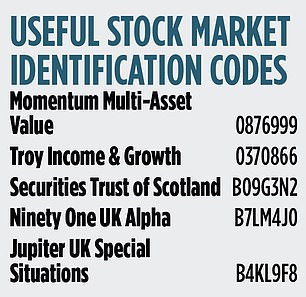 Shares in SSP are up 6 per cent over the past year while WHSmith’s shares are down 11 per cent. Since the turn of the year, the shares are down 0.23 and 6.8 per cent, respectively.

Or, as the cost-of-living crisis begins to bite, you could consider National Express, which will benefit if families stay in the UK and can’t afford the petrol to travel by car, or the ticket prices charged by train operators. Mark Wright, manager of investment trust Momentum Multi-Asset Value, says National Express is a ‘strong’ company.

He adds: ‘National Express has de-risked its balance sheet and is winning new contracts. So much so that the company is publicly targeting an additional £1billion of revenues between now and 2027.

‘Earnings have also been steadily improving ever since the first half of 2020 when the pandemic first struck and look on course to reach pre-pandemic levels by 2024.’

INVESTMENT FUNDS MAY BE THE TICKET

As well as Momentum Multi-Asset Value, Troy Income & Growth and Securities Trust of Scotland, many mainstream investment funds have exposure to travel stocks.

Interactive Investor suggests Ninety One UK Alpha. It is one of the platform’s recommended funds, appearing in its list of top ‘super 60’ investments. It has holdings in both Ryanair and easyJet. Its price is down 0.5 per cent over three years, 6.1 per cent over one year.

However you choose to travel this summer, it seems likely that your experience will be almost as stressful as following the stock market has been so far this year.

You could do worse than adopting the same principles to get through the experience. Be patient, plan for the worst and hold on – the destination will be worth the journey.