EXPRESS INFORMER > Business & Finances > Should YOU steer clear of emerging markets or is it time to buy?

Making money from emerging markets is not easy. Even veteran investor Terry Smith, hailed as Britain’s Warren Buffett, has announced he is winding up his fund that operates in the region, because it has ‘underperformed expectations’.

Smith’s Fundsmith Emerging Equities Trust is the third emerging markets fund to shut within just a few months, following on the heels of Jupiter Emerging & Frontier Income and ScotGems.

But these fund disappointments do not mean that emerging markets are lacking in investment opportunities. Many experts believe they have the potential to outperform developed markets over the next few years.

However, investors may have to accept a lot of stomach-lurching volatility along the way – and be prepared to work to seek out the best opportunities.

So what exactly are emerging markets?

That is the name given to fast-growing economies yet to reach their full potential. Like many labels put on our investments, the term is one of convenience that conceals a huge spectrum of markets.

There are as many as 24 countries in the main index of emerging markets – as diverse as South Korea, China, Brazil, Mexico, Thailand, Vietnam, India and South Africa.

Investing in emerging markets is generally seen as riskier than in so-called developed markets. In many cases, the accountancy and governance may be less reliable. Therefore, while there is often opportunity for rapid growth, there is plenty of volatility along the way.

Emerging markets have had a very difficult year, with stock markets falling in value by 25 per cent overall in the past year. By comparison the S&P 500 Index (a barometer of the health of big US companies) fell by 11 per cent.

Funds that contained Russian investments have been particularly hard hit after global sanctions rendered them all but worthless. These include Fidelity Emerging and Baring Emerging Europe, which has refocused on Europe, the Middle East and Africa.

A ripple effect from the war has affected other markets, by pumping up the cost of energy and food. ‘It has driven Sri Lanka to the point of bankruptcy,’ says James Carthew, investment trust expert at data group QuotedData.

China is the largest component of many emerging market funds and rich with investment opportunities. However, UK investors are shunning the Chinese stock market in droves, as a result of its appalling treatment of the Uighurs in the north-western region of Xinjiang, together with its intimidation of near neighbour Taiwan and refusal to denounce Vladimir Putin’s war on Ukraine.

What about the opportunities?

Investing in emerging markets requires a strong stomach and a long time horizon. Younger investors who have decades to ride out the ups and downs could reap rewards. Others who are likely to need their money within a few years may find it too risky.

Jason Hollands, managing director at wealth manager Evelyn Partners, is optimistic about emerging market funds. ‘My belief is that emerging markets will outperform developed market equities over the next year and a half,’ he says.

Hollands adds that the issues with Smith’s emerging market fund were to do with the way it was structured, rather than any systemic problem with investing in emerging markets.

Dzmitry Lipski, head of funds research at investment platform Interactive Investor, agrees that Smith’s exodus does not necessarily mean that emerging markets no longer present opportunities. ‘We wouldn’t take this as a broader ‘sell sign’,’ he says. 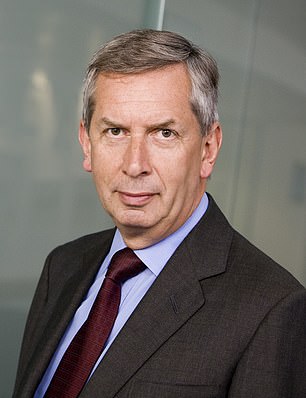 Could they be about to turn a corner?

‘They have suffered through one of the longest and most difficult economic downturns in decades,’ he says. ‘As a result, they look stronger than ever before. This is not the time to sell. It’s time to buy.’ There are plenty of reasons to be excited by many of these markets. Many have a growing middle-class, who have more money to spend and an appetite for consumerism.

Emerging markets are also generating more than half of global economic growth, despite the recent challenges. Chetan Sehgal, who runs the Templeton Emerging Markets Investment Trust, is particularly excited by technological innovation in the sector.

‘Emerging markets are home to companies with exposure to new technologies driving future sustainable economic growth,’ he says. ‘From solar and electric vehicle battery producers to semi-conductor designers and manufacturers, the acceleration of innovation is driving our confidence.’

A sprawling area… so fortunes vary

Matthias Siller, co-manager of Barings Emerging EMEA Opportunities, is excited by South Africa, because of its access to a broad range of metals. Charles Jillings, who runs the Utilico Emerging Markets Trust, has 22 per cent of his fund in Brazil, which is looking cheaper than for some months. Others are excited by India, a favourite of Darius McDermott, managing director at wealth platform Chelsea Financial Services. ‘The demographics are great, and the politics are business friendly,’ he says. 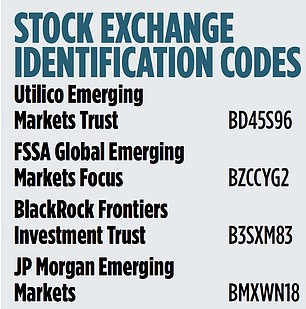 Don’t pile in… but drip-feed investment

Even if you are confident about the potential for emerging markets, it makes sense to keep your investments small and diverse.

McDermott recommends investing slowly. ‘I wouldn’t be piling in a lot of money right now, but drip-feeding a little might pay off over the long term,’ he says.

Lipski suggests that these markets should not make up more than 10 per cent of your portfolio, due to their volatility.

Study closely the funds you pick

Emerging market funds vary wildly, so it is important to check what you’re buying.

John Moore, senior investment manager at wealth manager Brewer Dolphin, suggests JP Morgan Emerging Markets. It invests across different markets, with India its top holding, followed by China, Taiwan and South Korea. It has risen 5.6 per cent over three years and fallen 22 per cent over one.

He also likes BlackRock Frontiers Investment Trust, which invests beyond the traditional emerging markets. It has risen 14 per cent over three years and 0.4 per cent over one.

‘Its largest exposure is to Saudi Arabia, then Indonesia, Thailand, Kazakhstan and the UAE,’ he says.

For those wanting something more traditional, McDermott recommends FSSA Global Emerging Markets Focus which, he says, ‘invests in 40 to 45 large and medium-sized quality companies that can demonstrate sustainable and predictable growth’.

Moore says that the fund focuses on infrastructure, which makes it less prone to violent swings in value. This is because governments tend to invest in infrastructure through all stages of an economic cycle, so it may perform well even in tough times.