EXPRESS INFORMER > Business & Finances > Should you share a financial adviser with your partner or family?

One in three families with a financial adviser use them to sort out money issues across different generations, new research shows.

A third of those sharing an adviser with parents or grandparents foot their own bill separately, according to the study of intergenerational planning and wealth transfer between advised families by M&G Wealth.

Passing on wealth: Many families who share a financial adviser say that one benefit is it ensures everyone is treated fairly

Since a lot of people go to advisers or financial planners to maximise what they pass on to younger family members, this can be a sensible approach and something we see more of in future given the amount of property wealth in particular held by older generations.

However, there are pitfalls as well as benefits when sharing a financial adviser, especially if a family ends up with similar financial products or providers.

We look at these below, and round up views from financial experts and advisers – one of whom makes the point that if you do share a firm’s services, it is worth asking for a family discount on the fees.

Some 38 per cent of people whose family share a financial adviser believe that it ensures everyone is treated fairly.

And 37 per cent think that everyone in the family being aware of each other’s financial situation is an advantage, according to the M&G Wealth survey.

Some 35 per cent say the practice saves tax, and 34 per cent that it helps younger family members and supports older generations too.

When it comes to how people feel about having the same financial adviser as the rest of their family, 37 per cent say they are relaxed as other members trust them, and 34 per cent are glad all the finances are in one place and they can review them together.

However, 33 per cent say they want boundaries and wouldn’t share all their details and situation. 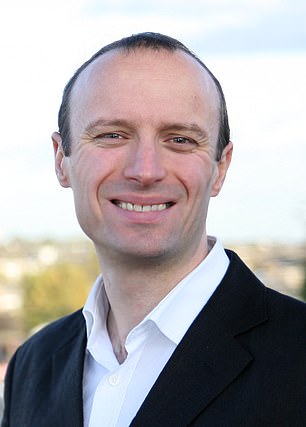 Justin Modray of Candid Financial Advice: ‘Should some of the adviser’s recommended investments turn sour, it could impact the whole family’

Vince Smith-Hughes, director of specialist business support at M&G Wealth, says: ‘Our research indicates that families feel happier talking to an adviser who is known to them and who they can trust.

‘Many of the families we spoke to are also investing in each other’s financial futures, with almost a fifth of grandparents paying for their grandkids to receive financial advice.’

M&G Wealth offers a restricted advice service, focusing on a limited selection of products and providers, rather than a full range like an independent financial adviser. It also has an independent advice arm, Sandringham Partners.

The firm surveyed 2,000 adults who have personally received financial advice in the past five years, or have parents or grandparents who did so.

Henry Tapper, an influential finance industry veteran, says it is a standard prospecting tool for advisers to become an adviser across generations, and some will work hard to gain access to all members of wealthy families.

‘There’s no denying that for good advisers it’s a way to align each generation’s interests by reducing tax bills, reducing costs of transitioning assets and ensuring that everyone is singing from the same hymn sheet, says Tapper, who chairs industry networking platform Pension Playpen.

‘The problems arrive when the hymn sheet favors the adviser rather than the family.

‘For many families, there are confidentialities that make employing the same adviser a conflict waiting to happen. Add to that the risk of concentrating decisions around one adviser’s “best ideas” and you can see why families have to think hard before putting their nest eggs in one basket.’

Tapper also questioned how many wealthy clients ignore ‘concentration’ risk for the convenience of an advisory one-stop shop, saying: ‘It all seems a little far-fetched to me.’

The potential pitfalls of sharing an adviser with your family?

– If you have investments, your portfolios might end up being too similar or held with the same providers and therefore risk won’t be spread widely enough.

– An adviser might be no good or even go bust. Ensure that it is at least authorised by the Financial Conduct Authority – check its register here.

– Different generations might lack trust or be reluctant to share full details of their finances and those of their partners, who might not want to reveal information to their in laws

– There might be some financial issues where there is a conflict of interest between the generations or among siblings, causing a conflict for an adviser too, as they might have to take sides or end up failing to resolve the issue.

– The issue of who pays for the advice might become a fraught one, and play into any conflicts of interest that arise, especially as the adviser will be aware who is footing the bill.

What do financial advisers say?

‘Using a “family” financial adviser can make sense, provided the adviser is a good one with competitive charges,’ says Justin Modray, director of Candid Financial Advice.

‘However, use an adviser whose advice is poor and/or expensive and you risk unwittingly inflicting the pain on the rest of your family.

‘In practice, children or young adults talking advice on modest monthly savings is unlikely to be cost-effective. If their needs are simple, going direct to a low cost investment platform may prove the more viable option, unless their parent’s financial adviser includes the additional advice within the fee they already charge.’

Modray adds that where a financial adviser runs their own investment funds, or recommends similar portfolios across the family, there is a risk of having all your eggs in one basket.

‘Should some of the adviser’s recommended investments turn sour, it could impact the whole family.’

He also raises a counter argument, that it’s ‘healthy’ for family members to make independent decisions regarding their finances.

‘This may well involve a discussion with any existing family adviser, but then compare to others to get a feel for the route you are most comfortable with.’

Regarding fees, Modray says: ‘Pay close attention to what each adviser will charge and the service they’ll provide in return. This way, if they do decide to use the family adviser it’s because they made an informed decision, not because mum or dad told them to.

‘Finally, where an adviser does deal with more than one family member, ask them to reduce their fee to reflect any increased efficiencies versus looking after unrelated clients.’

Alison Treharne, a chartered financial planner at Shore Financial Planning, says: ‘It often follows that once a relationship has been established with parents or grandparents, their offspring also become clients.

‘The trusted recommendation is even more valued in families. We treat them each as individuals with their own objectives/plans but it does assist the adviser with intergenerational planning to act for the family, albeit with confidentiality as agreed with each member.

‘I would go so far as to say it’s a joy and a privilege to manage family wealth and I am only sorry I won’t be around forever to see some of the generous, forward thinking plans we have put in place come to fruition.

‘The “pay it forward” approach is a touching thing to see in families.’