Shopppers are set to spend over a billion on online sales on Christmas day, down by 12% on the equivalent day last year.

The numbers of online sales have soared during the pandemic with 8.1 million shoppers heading online, expected to spend £1 billion tomorrow and £1,7 billions on Boxing Day.

However the numbers are considerably lower than last year when Britons spent almost £1,2 billions on Christmas Day.

Figures show that overall sales between Christmas Day and the end of December are estimated to fall by an average of 23% in comparison to last year.

In 2019 shoppers spent £1,2 billions on online shopping on Christmas Day while on Boxing Day £4,3 billions were spent in High Streets and online.

In contrast this year shoppers are expected to spend £1,4 billions online on Christmas Day and £3,2 billions on High Streets and online on Boxing Day. 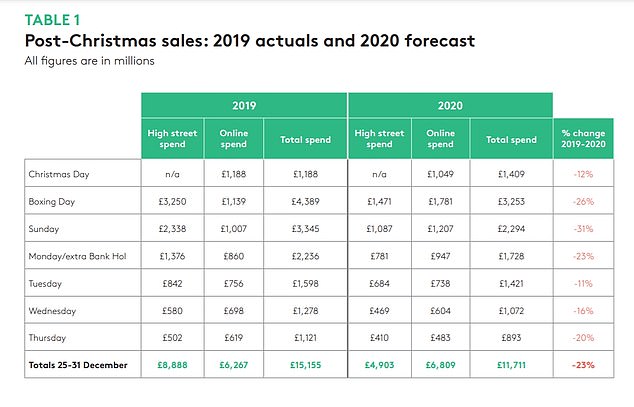 Last year  Britons spent almost £1,2 billions online on Christmas Day while in 2020 are expected to spend just over £1 billion 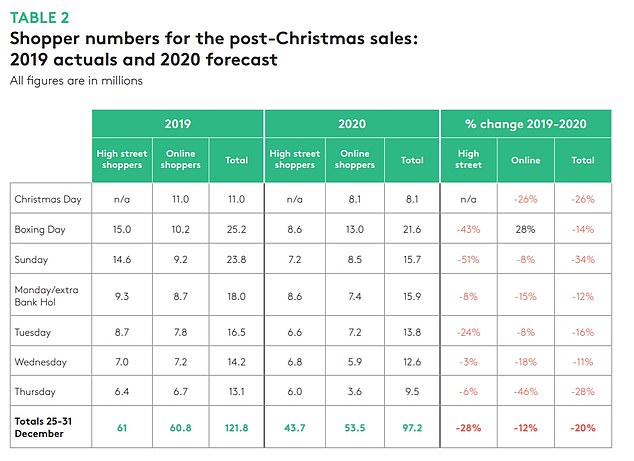 8.1 million shoppers have chosen online shopping this year- a drop of 26% in comparison to the 11 millions of 2019

Boxing Day sales are expected to plummet for third consecutive year with online spending set to increase by 56%.

The government announcement of the new Tier-4 lockdown in parts of the country has had a negative impact to bricks and mortar stores with a general drop in sales over the festive period.

Tier -4 closures have affected the retail prospects for non-food retailers said the Centre for Retail Research study for VoucherCodes, based on interviews with 50 major UK retailers and over 1,000 shoppers.

Anita Naik, Lifestyle Editor at VoucherCodes.co.uk, commented: ‘The post-Christmas sales are always one of the busiest times for retailers, and while this is still the case, it’s not surprising to see a decline in sales for the third year in a row, especially due to the new restrictions in place for most of the country.

‘In tiers 1, 2 and 3, retailers can continue to trade so the picture is mixed. However, the impact on spending in Scotland and Wales – which are both bringing in new lockdown measures from Boxing Day – as well as areas in England that are already in tier 4, is severe.

‘Of course, consumers can still make the most of the sales by shopping online and the outlook here does look better. For those hoping to grab a bargain, DealFinder by VoucherCodes automatically finds and supplies the best discounts while you’re shopping online and is a quick and easy way to make sure you don’t overspend.’