CCTV reveals the shocking moment a shop worker  was attacked with a knuckle-duster after asking a customer to wear a face mask.

Ian Robson, 48, was working at a Nisa convenience store in Gateshead, Tyne and Wear when he was dragged over the counter and punched in the head and face.

The incident took place after  he politely reminded a customer that face coverings are now mandatory as part of measures to stop the spread of coronavirus.

Northumbria Police are still hunting the thug, who was caught on CCTV storming into the shop and attacking Ian, with his identity concealed behind a scarf.

And now Ian has spoken out about the daily challenge retail workers face in trying to get customers to follow the rules to help keep everyone safe.

Ian, said: ‘I was just doing the right thing and just trying my best to keep everyone safe.

‘I had four customers come in and none of them had masks on so I mentioned to them that they had to wear masks. 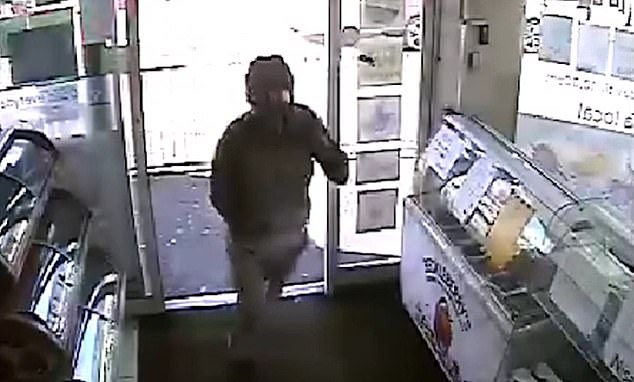 The man exits the store leaving Ian with a black eye, cuts and bruises

‘Three of them turned round and said that was fine, but one of them said: ‘Well I won’t wear a mask ever’.’

The incident took place on September 13 at Nisa convenience store on Coatsworth Road in Bensham.

The man left after Ian told the him he would not be able to come into the store again if he refused to wear a face-covering.

But about ten minutes later, while Ian was serving an elderly lady at the till, a man burst into the shop and launched a terrifying attack.

After the attack the man fled the shop and disappeared leaving Ian with a black eye,cuts and bruises.

Ian returned to work soon after the incident, but says he now feels nervous in the job he has done for more than a decade.

Ian added: ‘I was serving a customer and he just ran into the store, tried to pull me over the counter and punched me twice in the head.

‘He had a knuckle-duster on. All I can remember is that it was silver and it hurt. He hit me twice, once on the head and once on the face.’

‘I was in shock more than anything else. ‘I have worked there 11 years and nothing like that has ever happened before. It’s a friendly shop. I know all of the regulars.

‘I’m back at work now and I have found it difficult.

‘I’m nervous and I’m anxious about whose going to come through the door. But the amount of support I have had from the community since it happened has been brilliant.

‘It’s not a normal part of the job, it’s very difficult and it’s got worse since they made it mandatory for staff too.

‘Most people are fine if you remind them. We sell masks in the shop and some of them will stand at the door and say they haven’t got a mask but will pay for one inside. We don’t have a lot of problems.

The attack was caught on CCTV and police have appealed for anyone who knows who is responsible to get in touch.

PC Martine Coxon, of Northumbria Police, said: ‘We don’t believe this is an attempted robbery and believe it could be related to an earlier verbal altercation in the shop.

‘The victim was working behind the counter but not wearing a mask as he is exempt due to underlying health conditions.

‘Shortly before the assault he had asked a customer to put on a mask but the man challenged the staff member as he was not wearing a mask himself.

‘The man left the store as a result of the verbal altercation and a short time later the suspect has entered the shop and assaulted him.

‘There could be other motives for this attack, and we are keeping an open mind as to why the victim was targeted.

‘However, we are now asking for your help to trace the person responsible for what appears to be an unprovoked attack.

‘This type of violence is completely unacceptable and we are determined to identify them and put them before a criminal court.’

The suspect is described as Asian, aged in his 20s or 30s and of slim build. At the time of the attack he was and wearing a grey and black tracksuit and had a white patterned scarf over his face.

Anyone who knows the man, or has information that may help police, is asked to called Northumbria Police on 101 quoting log 530 13/09/20.